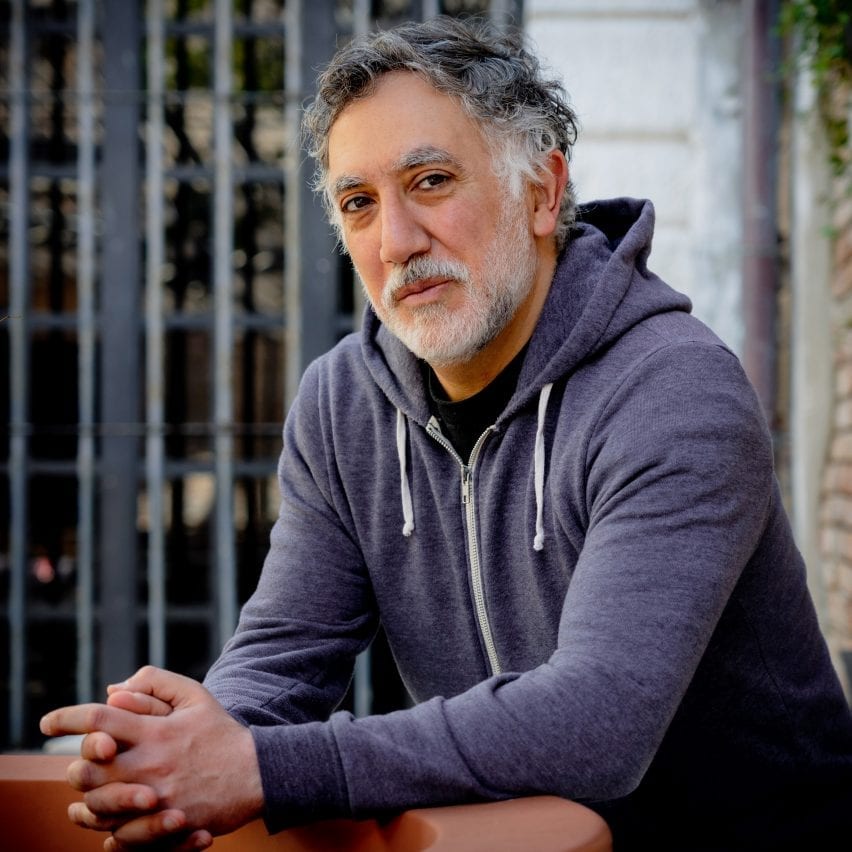 Installing the Venice Architecture Biennale, which opens 22 May, during the pandemic has forced participating architects to work in a more collaborative and sustainable way, according to curator Hashim Sarkis.

“It has definitely affected, in a creative way, the question of efficiency and how we can reduce our carbon footprint,” he told Dezeen.

“Many teams sent one person, many teams sent no one, and those who are close enough to Venice came by car or by truck,” said Sarkis ahead of the biennale’s opening this week.

“So that has significantly re-imagined how we can exhibit in a more effective and environmentally conscious way.”

Sarkis, a Lebanese architect and dean of architecture and planning at MIT, curated this year’s event around the theme of “How will we live together?”

Running from 22 May to 21 November, this year’s Venice Architecture Biennale aims to answer the question by asking participants to envision spaces where people from around the world can come together, despite widening political and economic divides, to share their solutions to global problems.

“Talent and imagination are not restricted to advanced development economically,” Sarkis said. “I hope this message comes across in this biennale.”

The biennale takes place a year later than originally intended as the coronavirus pandemic forced it to postpone last year, and is the first major architectural event since the start of the pandemic.

Italy has been heavily affected by the virus and is still under an evening curfew with some countries, including the UK and US, advising against travelling to Italy.

But building up the event under strict lockdown rules had some positive repercussions, Sarkis told Dezeen, as architects from all over the world had to collaborate closely with their colleagues on the ground in Venice to build pavilions in time.

“The pandemic has created a very interesting set of challenges for us in dealing with how we exhibit,” Sarkis said.

“We managed, for the majority of the projects, to have a team on site take care of the installation and the digital transfer of drawings and models has increased exponentially in this biennale.”

Rather than having global architecture firms sending groups of people to Venice to install the numerous pavilions and exhibitions, the team on the ground worked with just a few overseas representatives.

Sarkis also believes the collaborative effort created a dialogue between the teams that is new and was another result of the coronavirus postponement.

“Many relied on local architects to help them install their buildings and their projects, which created partnerships between Italian firms and non-Italian firms, so that has been very moving to watch,” he said.

The effort illustrates the theme of working and living together that runs through the biennale, which Sarkis hopes will help address issues such as diversity and sustainability.

He argues that while the question of how we will live together might traditionally have been posed to politicians, the answers are now more likely to come from other sources.

“I believe very strongly that the central questions of politics are no longer in politics, and that they have migrated or have always been implicitly somewhere else,” he said. “So therefore I’m hoping that we can find answers to this question through architecture.”

Sarkis believes that diversity is an implicit part of the answer to that question.

“How will we live together depends on all of us being present in all of our dignity and expressions, thinking and individuality, but also collectivity,” he said. “Every single one of us.”

In a statement, Sarkis said this year’s edition has increased representation from Africa, Latin America and Asia.

The number of women taking part has also increased since 2018, the organisers said, though they did not have statistics available to show by how much.

Venice is “the world coming to show their solutions”

Sarkis believes the increased representation is a sign of a significant change that the biennale has undergone in the past decades.

“This is very different now. It’s the world coming to show their solutions, their ideas in Venice, and for Northern Europe and the United States to come and see how architectural imaginary and novel solutions come from everywhere,” he added.

“An architecture project is not just one author”

This edition of the biennale also sees a change in how different projects taking part have been attributed, with all contributors named for each project.

“It’s no longer just one author and everybody else is suppressed,” Sarkis explained.

“The lists are very long and rich and come from different backgrounds on the same project, with everyone credited. That is a new dimension, where we are making it more visible that an architecture project is not just one author.”

Though Sarkis says the biennale got “very close” to where it wanted to be in terms of representation this year, he believes upcoming editions will naturally continue to focus on this aspect and become more diverse.

“Hopefully this will be a question that answers itself by virtue of what you’re seeking in the work, rather than by trying to answer it indirectly,” he said.

“Architecture is a profession that has not been open to diversity until recently, and we have a long way to go to get there,” he added.

“And this is just one step in that direction – a biennale cannot solve all of the inequalities of the world. But we try.”

Photography is by Andrea Avezzù courtesy of the Venice Biennale.

The 2021 Venice Architecture Biennale is taking place from 22 May to 21 November in various venues across the city. See Dezeen Events Guide for an up-to-date list of architecture and design events taking place around the world.

The post The pandemic has "re-imagined how we can exhibit" says Venice Architecture Biennale curator Hashim Sarkis appeared first on Dezeen.