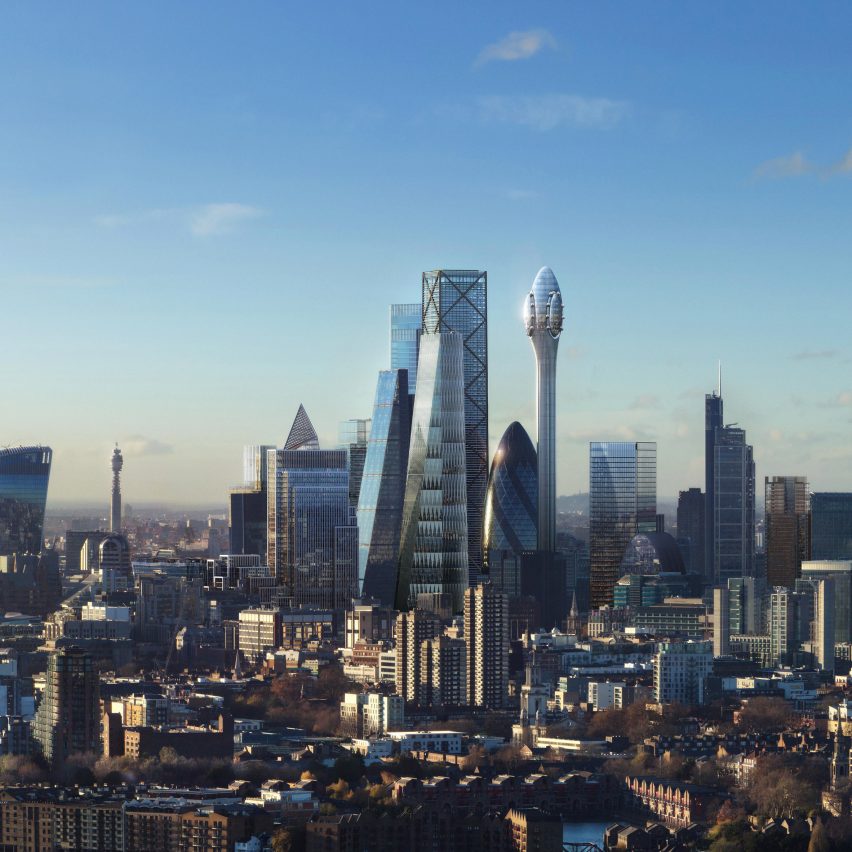 The City of London has said that Foster + Partners‘ 305-metre-high The Tulip has “the potential to become an architectural icon”, in its planning report on the proposed tourist attraction.

Planning officers praised the form of the spire in a 152-page report published by the City of London ahead of the planning committee meeting next week, reported Building Design.

The Tulip is now on track to be given planning permission, despite the city’s mayor Sadiq Khan objecting on the grounds that it does not comply with the London Plan. London City Airport had also raised concerns that the supertall viewpoint could interrupt its radar system.

“Virtually no major development proposal is in complete compliance with all policies,” reads the report.

“In arriving at a decision it is necessary to assess all the policies and proposals in the plan and to come to a view as to whether in the light of the whole plan the proposal does or does not accord with it.”

Tulip would cause “less than substantial harm”

Planning officers noted that The Tulip, which would feature a multi-deck glass viewing platform with internal slides and a set of rotating gondolas on the exterior, was “highly unusual”.

The Tulip would sprout next to 30 St Mary’s Axe – nicknamed the Gherkin – the 180-metre skyscraper by Foster + Partners that won the Royal Institute of British Architects (RIBA) Stirling Prize in 2004.

“Its aesthetic inspiration derives from the Gherkin and the proposal seeks to achieve a familial synergy with the Gherkin,” continued the report. It goes on to say that the tower would cause “less than substantial harm” to its historic surroundings, which includes the Tower of London.

As acknowledged by the report, the Gherkin originally towered over the other buildings in London’s financial district, but has been overshadowed by the skyscrapers that have sprung up around it in the past 15 years.

“In this regard, a striking and eye-catching architectural statement is not of itself uncharacteristic of the underlying aesthetic of the City cluster,” said planning officers.

“London is inherently an innovative and ever-changing City. The Tulip as an architectural expression could continue this tradition of accommodating unconventional and eye-catching landmarks on the skyline.”

The Gherkin was bought in 2014 for a reported £726 million by Brazillian billionaire Joseph Safra, the world’s richest banker according to Forbes, who promised to make the property “even better and more desirable“.

Along with a restaurant and viewing platform, the Safra Group has promised to build an educational facility in The Tulip that would offer free places for local state school pupils to visit.

However a report from the Greater London Authority (GLA) said it would be in contravention of the London Plan as it “fails to provide free to enter publicly accessible viewing areas”. If approved The Tulip would begin construction in 2020 and open for visitors in 2025.

Foster + Partners, the largest architecture studio in the UK, was founded by Norman Foster in 1967. The studio has won the Stirling Prize three times taking home the accolade for the Bloomberg Building in 2018, the Imperial War Museum in Duxford in 1998, as well as the Gherkin in 2004.

The post The Tulip by Foster + Partners on track to be approved by City of London appeared first on Dezeen.