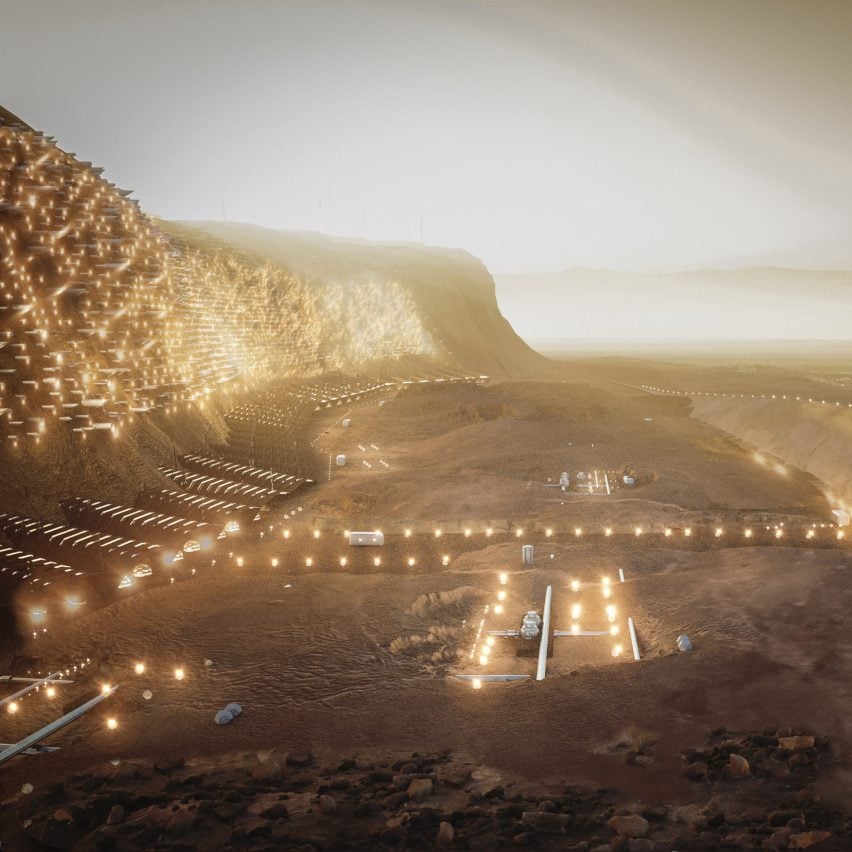 This week on Dezeen, a video fly-through showed architecture studio Abiboo’s proposal for Nüwa city, which was designed to be the first permanent city on Mars.

The city, which was envisioned to house up to 250,000 people, would be embedded into a cliff face.

It was designed by Abiboo for non-profit organisation the Mars Society to be a self sufficient and sustainable settlement.

“It is a sustainable and self-sufficient city with a strong identity and sense of belonging,” Abiboo founder Alfredo Munoz told Dezeen in an exclusive interview. “Nüwa is conceived to be the future capital of Mars.”

Interest in NFTs continued this week with digital designers telling Dezeen the technology will lead to a wave of artistic innovation as creatives can sell work directly to customers.

“We’re right at the beginning of the frontier,” 3D artist Alexis Christodoulou told Dezeen. “This is an opportunity to create something beautiful because you’re in charge again.”

Guests listened to speakers including Space Popular and Amber Slooten from The Fabricant discuss the rise of the metaverse – a term used to describe the emerging digital universe – and how this could eventually lead to the merge of the virtual and real worlds.

The metaverse meet-up also featured live musical performances as well as opportunities to network with other guests in a virtual lounge and bar.

We continued our collaboration with the editors of the Sub-Saharan Africa Architectural Guide with a look at the architectural highlights of northeast Africa.

Projects picked by the editors from the region included the Fiat Tagliero Service Station (above) in Asmara, Eritrea, and the Al-Nilein Mosque in Sudan.

The logos for the Milano Cortina Olympic and Paralympic Winter Games were revealed this week. The angular line drawing of the number 26 was chosen as the logo in a public vote.

Also in sports, football club Inter Milan revealed a new emblem, which saw the letter FC taken of its logo in a bid to appeal to a non-footballing audience.

Over the Easter weekend, we featured a trio of spring lookbooks.

They focused on domestic interiors featuring statement plants, lush rooftop gardens and bright kitchens that are flooded with natural light.

Popular projects this week included a compact black-brick house on the site of a former garage, a house on a wooded site near Lake Tahoe and a red chess pavilion built within French parkland.

The post This week Abiboo envisioned a city on Mars for quarter of a million people appeared first on Dezeen.