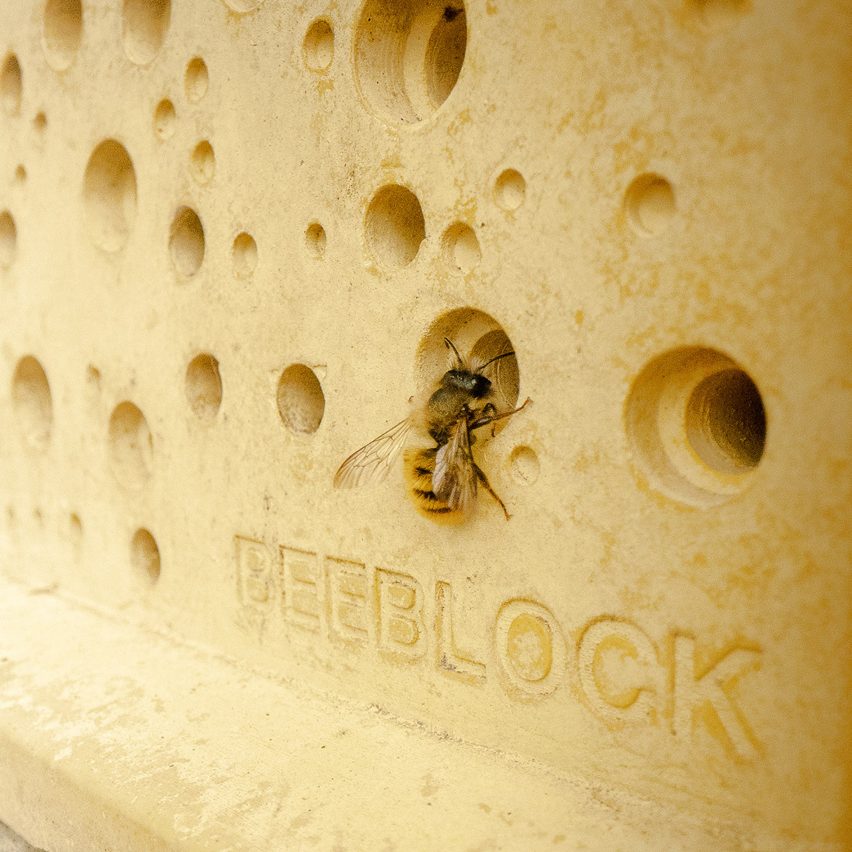 This week on Dezeen, perforated bricks that provide nesting space for bees became a planning requirement for new buildings in Brighton, England.

The aim of the initiative is to improve biodiversity in cities and turn them into safe havens for wild and solitary bee species that are facing extinction.

The bricks have proven controversial among scientists, with some raising concerns that they could attract mites and spread diseases while others see them as “an unequivocal good thing”.

With the Beijing Winter Olympics kicking off next week, we shared a look at the city’s Populous-designed speed skating arena, which is the only permanent venue built for the games.

British athletes are set to enter the venue in newly revealed kits by sportswear brand Adidas. They are made from marine plastic sourced by Parley for the Ocean and rendered in the traditional colours of the Union Jack.

In architecture news, a hospital in rural Bangladesh made from locally sourced brick was named the world’s best building by the Royal Institute of British Architects.

Designed by local practice Kashef Chowdhury/URBANA, the project was awarded the 2021 RIBA International Prize for providing affordable medical care to thousands of people while treading lightly on the planet by making use of regional resources, harvesting rainwater and passively cooling and daylighting its interiors.

After RIBA announced a forthcoming design contest for the refurbishing of its headquarters architecture critic Phineas Harper penned an op-ed for Dezeen arguing that these funds would be better spent on turning the Portland Street building into a “village hall” for architects.

“Instead of investing £20 million in itself, building bigger, better, more competitive facilities to draw audiences away from programmes elsewhere, RIBA should simply open the doors and let people in,” he wrote.

In the world of design, Virgil Abloh’s final posthumous show for Louis Vuitton took place in the Carreau du Temple in Paris, with a set designed by LA studio PlayLab.

It paid homage to the eight previous shows that Abloh spearheaded as creative director for the fashion house before his death in November 2021, incorporating elements from each in a surrealist medley including a sunken home.

Design reporter Alice Finney spoke to Titi Ogufere, the co-producer of Netflix docuseries Made by Design, about five Nigeria-based designers and architects featured in the show that she believes deserve greater recognition.

Among them are Seun Oduwole, who is in the midst of building a Yoruba heritage museum in Lagos (above), and furnituremaker Lani Adeoye, who works to preserve traditional African crafts.

A number of conceptual projects were popular among readers this week including a ring-shaped, 3D-printed settlement inside a Martian crater and a subterranean house on the coast of Crete.

Our lookbooks this week focused on interior courtyards and glass-brick walls.