Swedish architect Hanna Michelson has completed a stilted timber cabin overlooking the Åsberget mountains, as the first of four getaways being built for the Bergaliv Landscape Hotel. The Stockholm-based architect, who works for Tham & Videgård Arkitekter, was commissioned by Bergaliv to build the 10-metre-tall heart-pine and spruce Lofthuset (loft house) on a former ski slope in Vallsta as a retreat for up to two people. 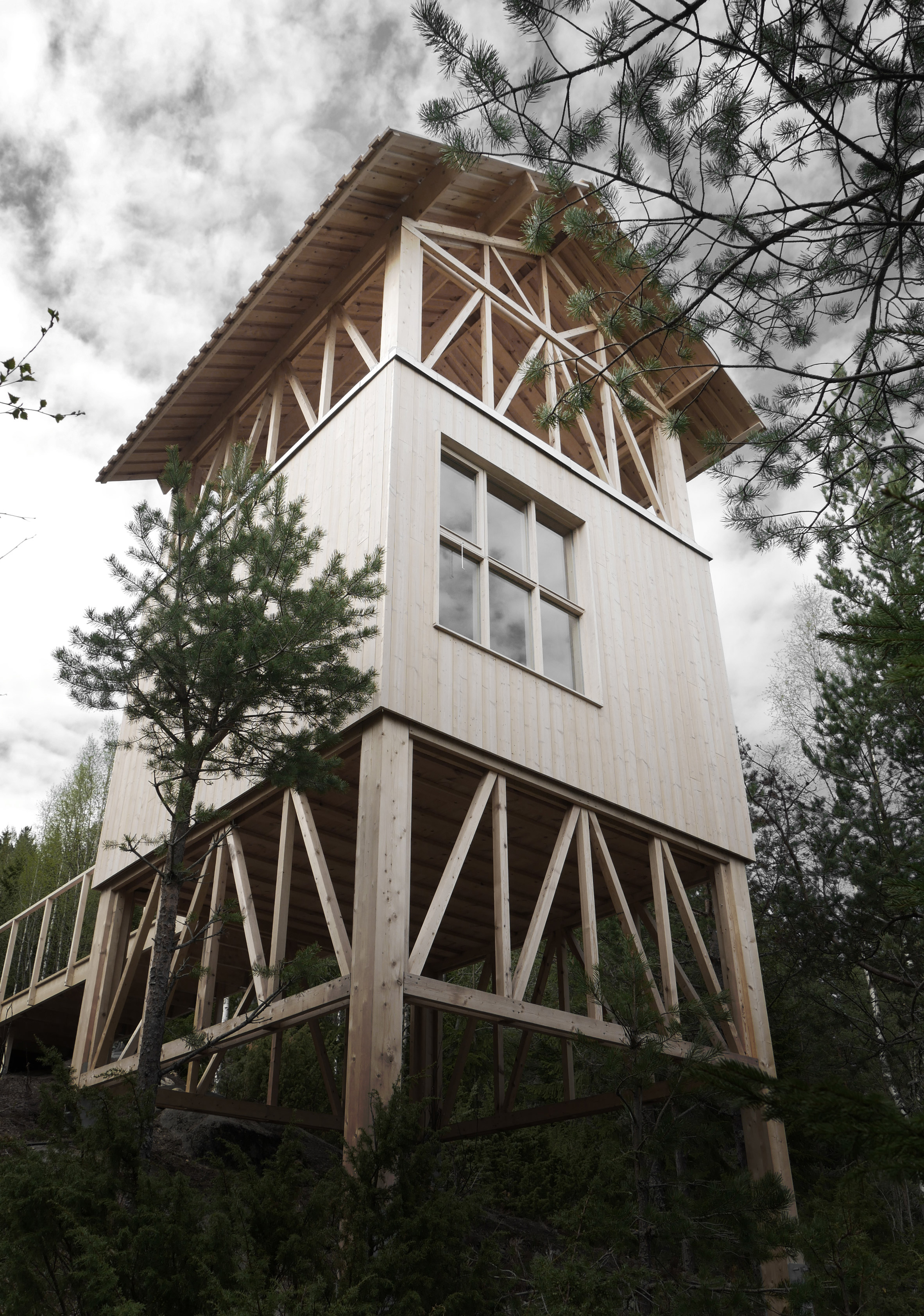 Michelson created an open deck under a gabled pinewood roof on the building’s top floor to allow for an uninterrupted view over the valley below.

Stripped of all walls, timber beams form balustrades around the outdoor vantage point. The same linear pattern of beams is symmetrically echoed on the underside of the first floor. 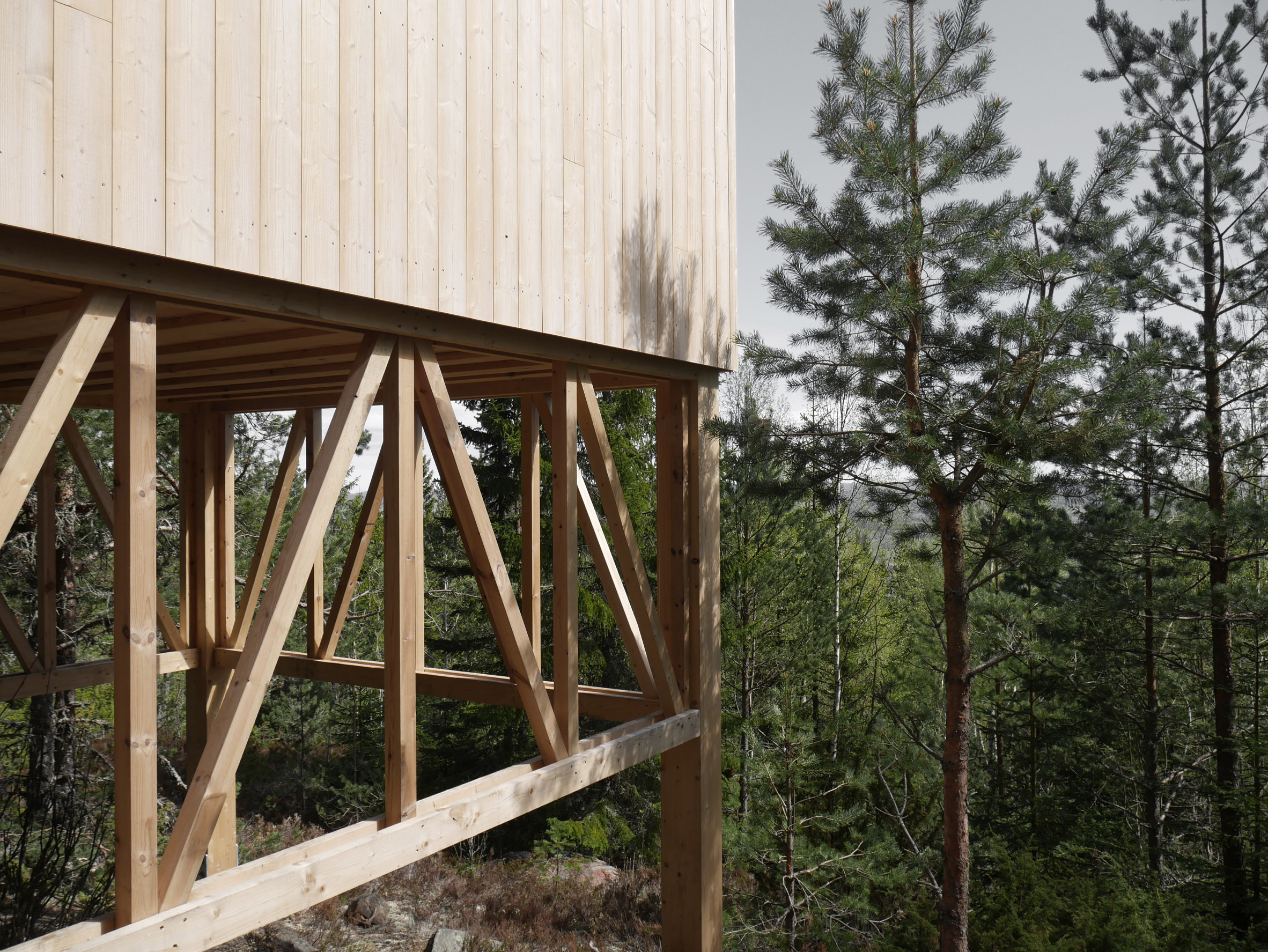 “The dualism of the site – with its closeness to nature combined with the expansive view – has set the rules for the small house,” said the architect.

“And is expressed in the two contrasting spaces sharing the purpose of providing a sanctuary and a peaceful vantage point for the visitors.” 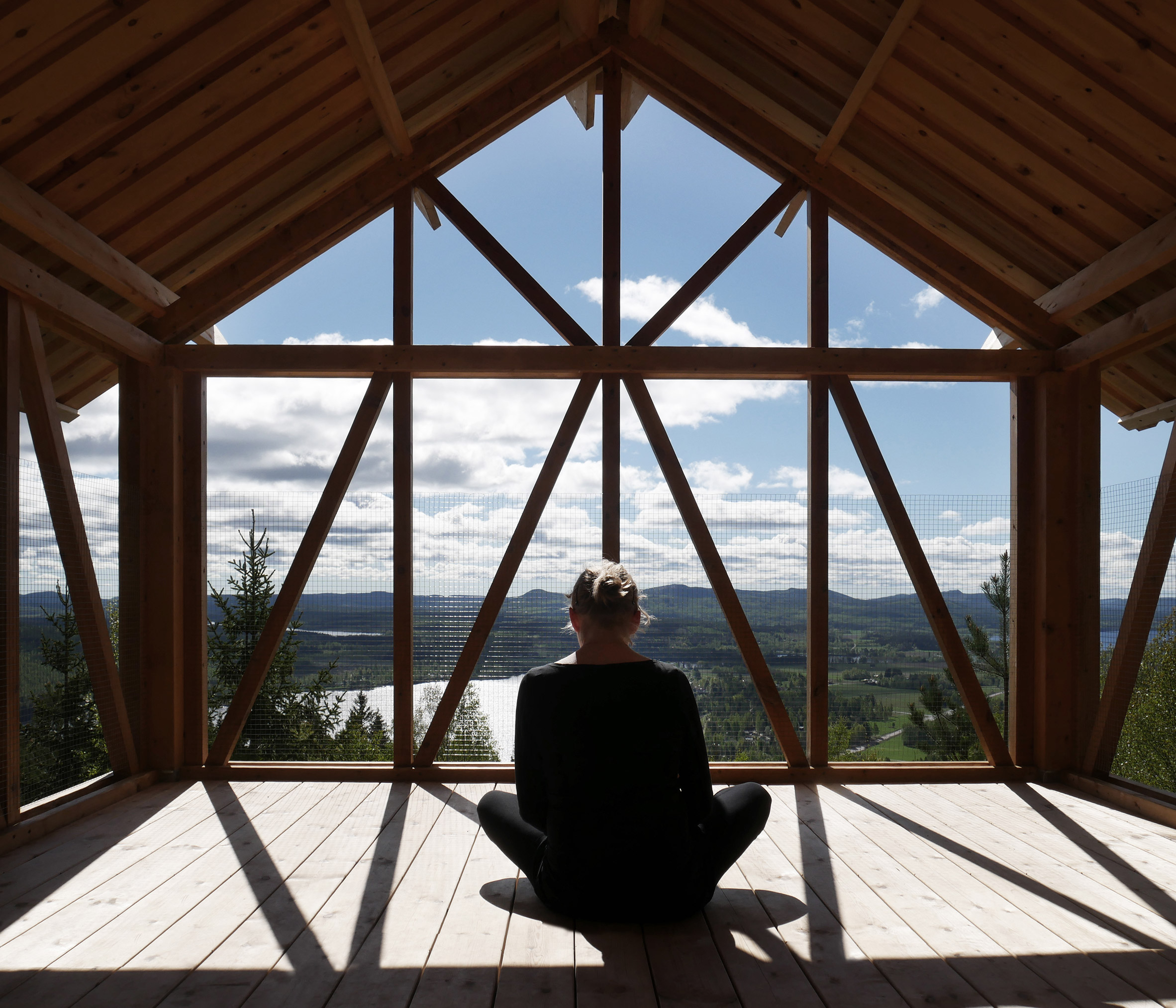 The lower room, which is entered via an elevated pinewood walkway that connects to the timber frame, sits nestled in the treetops and forms the cabin’s compact sleeping and living area.

Inside, a raised L-shaped birch bench creates a window seat facing the landscape. On one side of the room, a wall of cabinets creates modest storage in which a small tap and bowl-shaped sink are installed into a marble-top niche – with references to Japanese design visible in the ceramic plates and cups on the shelves above.

The cabin’s walls are insulated with flax fibres in accordance with nordic building traditions. Wall fittings provide space-saving solutions for the compact, 14-square-metre room, allowing the space to be cleared for daily activities. Two futon mattresses are attached to a wooden dowel that can be hung from one wall, while leather fastenings secure the rolled up bedding.

“The interior of the house is minimalistic and raw, intending to clear the room from unnecessary noise and at the same time invite light and space,” said Michelson.

“The wooden bench by the window works as a place for rest and reflection as well as seating during mealtimes.” Past examples include Arrhov Frick Arkitektkontor’s slender, timber-framed cabin on an island in the Stockholm archipelago, and White Arkitekter’s bathhouse, which was constructed for a group of local sea-bathing enthusiasts from the coastal town of Karlshamn. Stilted cabin is raised among the treetops on the Stockholm archipelago

The post Timber-framed cabin by Hanna Michelson stands on stilts to peep over the treetops of Swedish mountain appeared first on Dezeen.