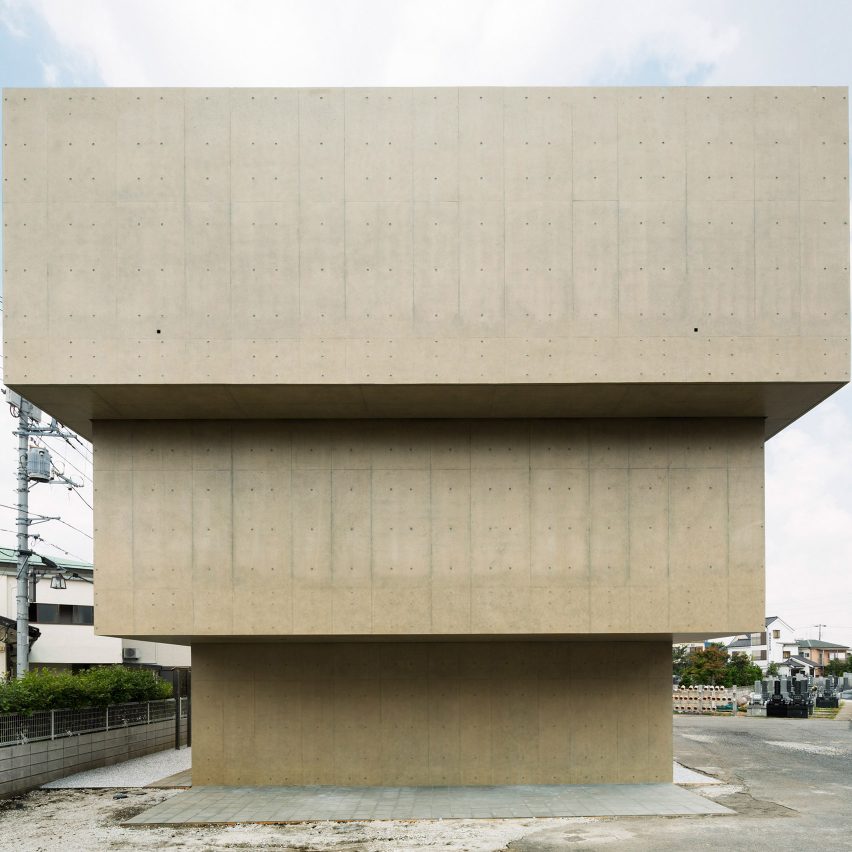 Shoraku-Ji is a Buddhist temple next to a cemetery in northeast Tokyo by Toru Kashihara Architects with a stepped concrete design that aims to subvert traditional temple architecture.

Located on a site surrounded by many other temples and cemeteries, all of Shoraku-Ji temple’s functions – which may have otherwise been housed in individual structures – have been compressed into this single multi-storey building. 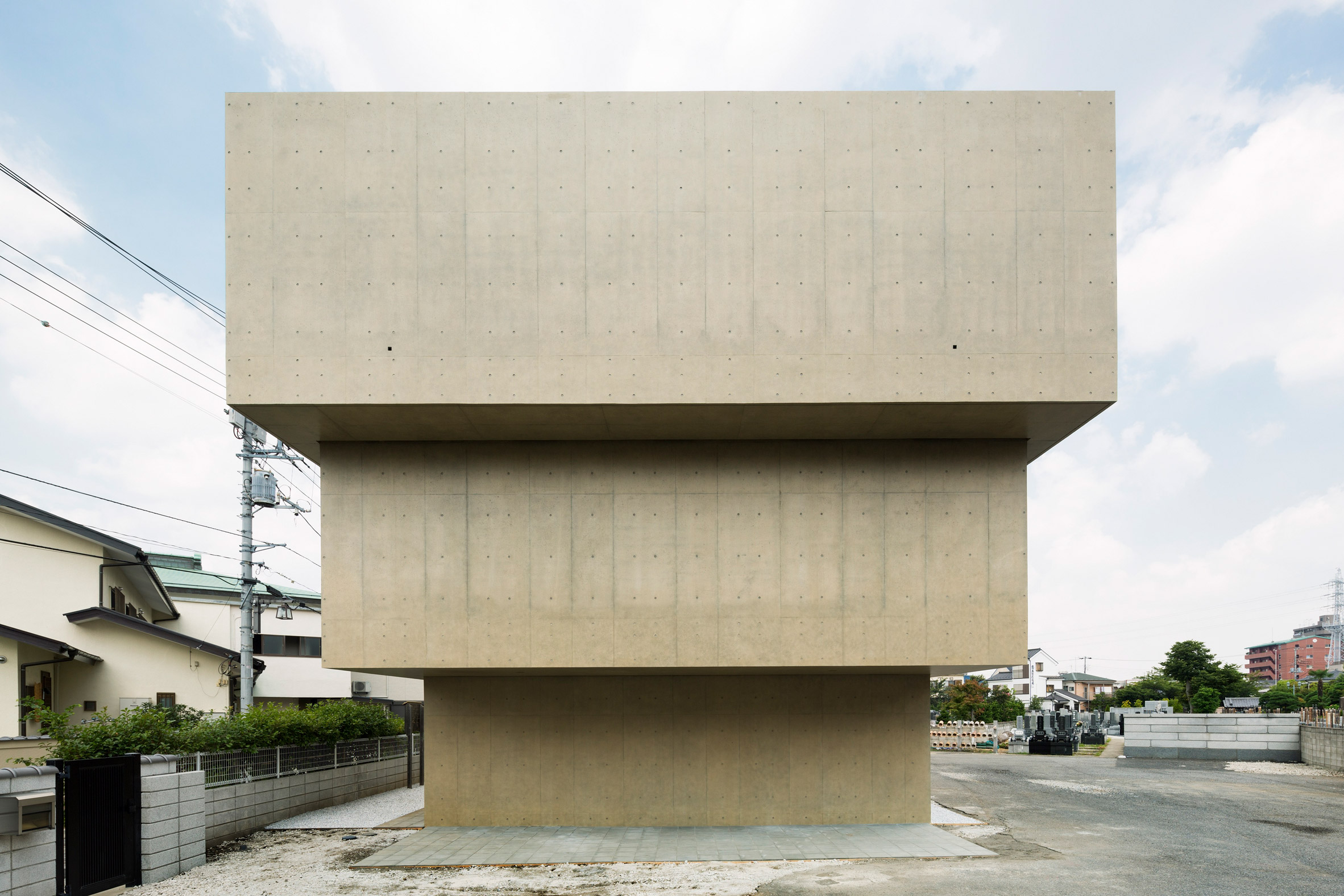 “It is not a traditional Buddhist temple form with multiple buildings across a site. Rather, it is organised into a single building of three floors.” 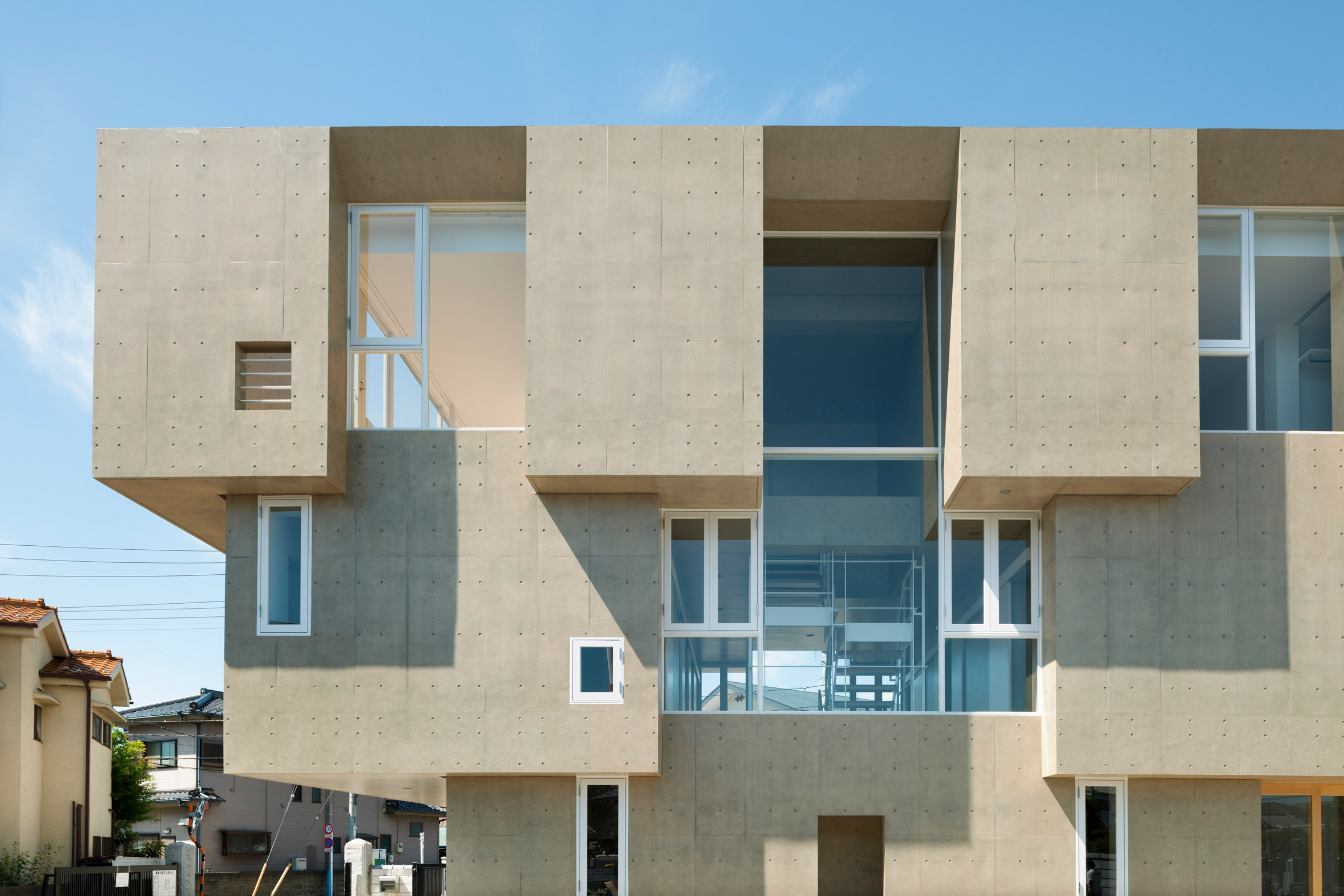 On the ground floor is the visitor centre and an events space, and above this is a space for religious ceremonies with an altar. The top floor is a residential space for the temple’s priest.

Each of these levels grows in depth as they move upwards, cantilevering out to the south to create a sheltered space below, “in the same fashion as the eaves of an old temple”. 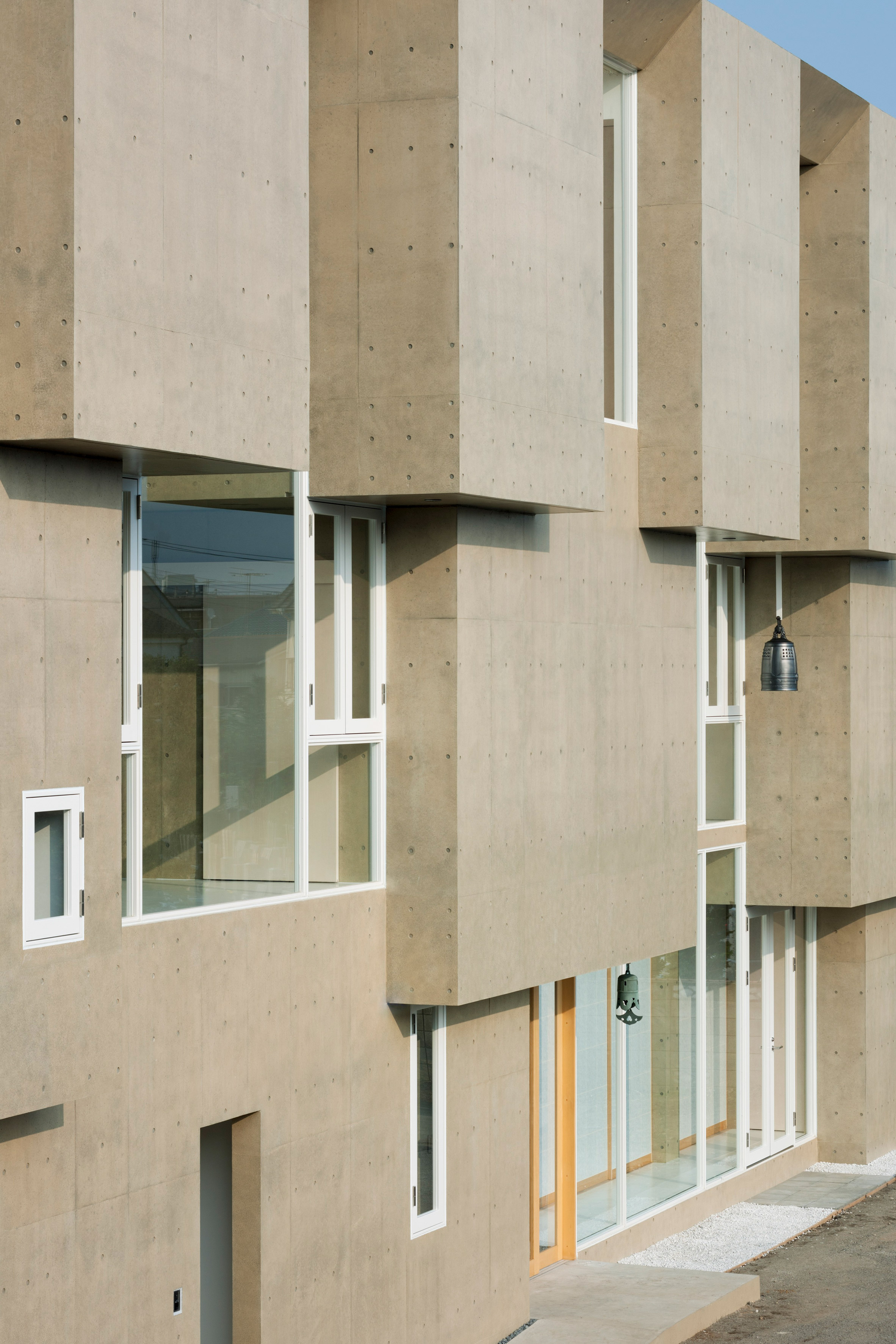 The facade is split into three horizontal bands formed by overlapping concrete wall sections and glazed openings. As the floors moves upwards, the width of these wall and window sections is halved and the reveals become deeper.

At the temple’s northern end, these openings all align, creating a triangular stack that centres on a view through to the altar. 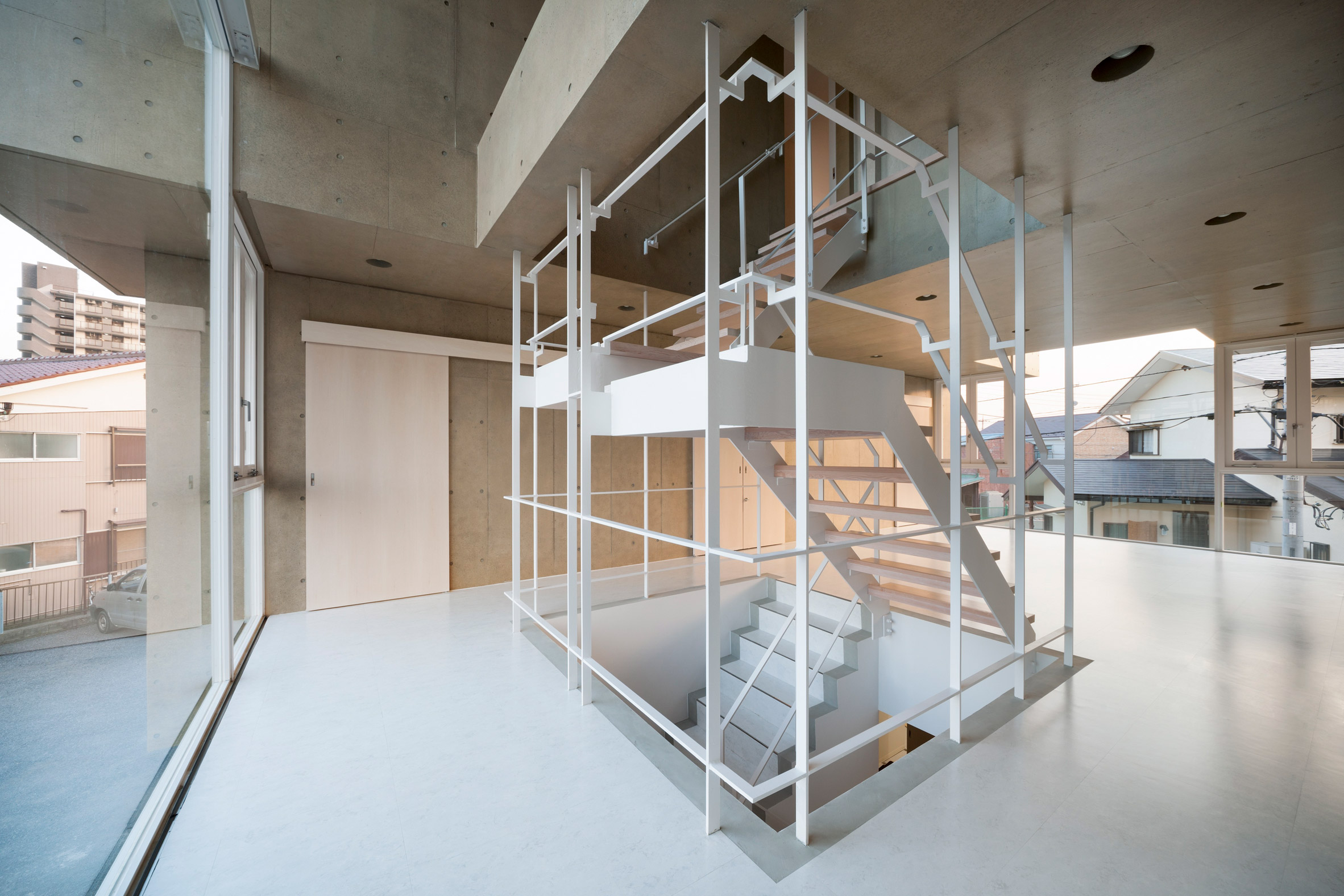 “As the temple climbs in height, the boxes and gaps are half the width of those below, and the depth of the boxes increases as they extend into the air,” said the architecture studio.

“As a result, the building appears in elevation to be a huge To-Kyou, which in traditional Japanese wooden temple construction is a layered joint that connects the pillars and beams.” 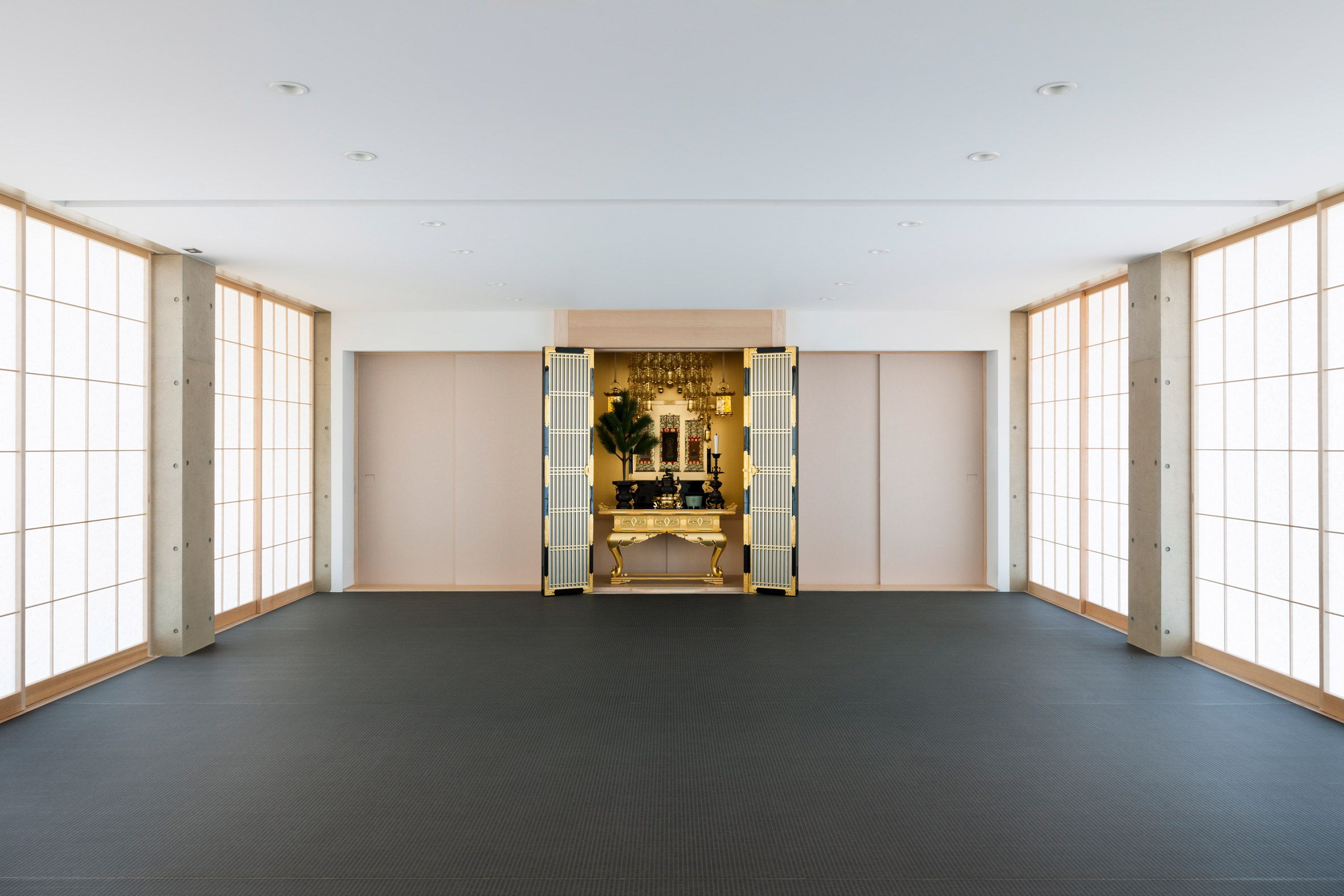 The concrete finish of the exterior also dominates the interiors, which has been left flexible with sliding doors, wooden floors and traditional screen walls.

The primary religious space within the Shoraku-Ji temple has been finished with a latticed wooden ceiling, beneath which sits the ornate altar. 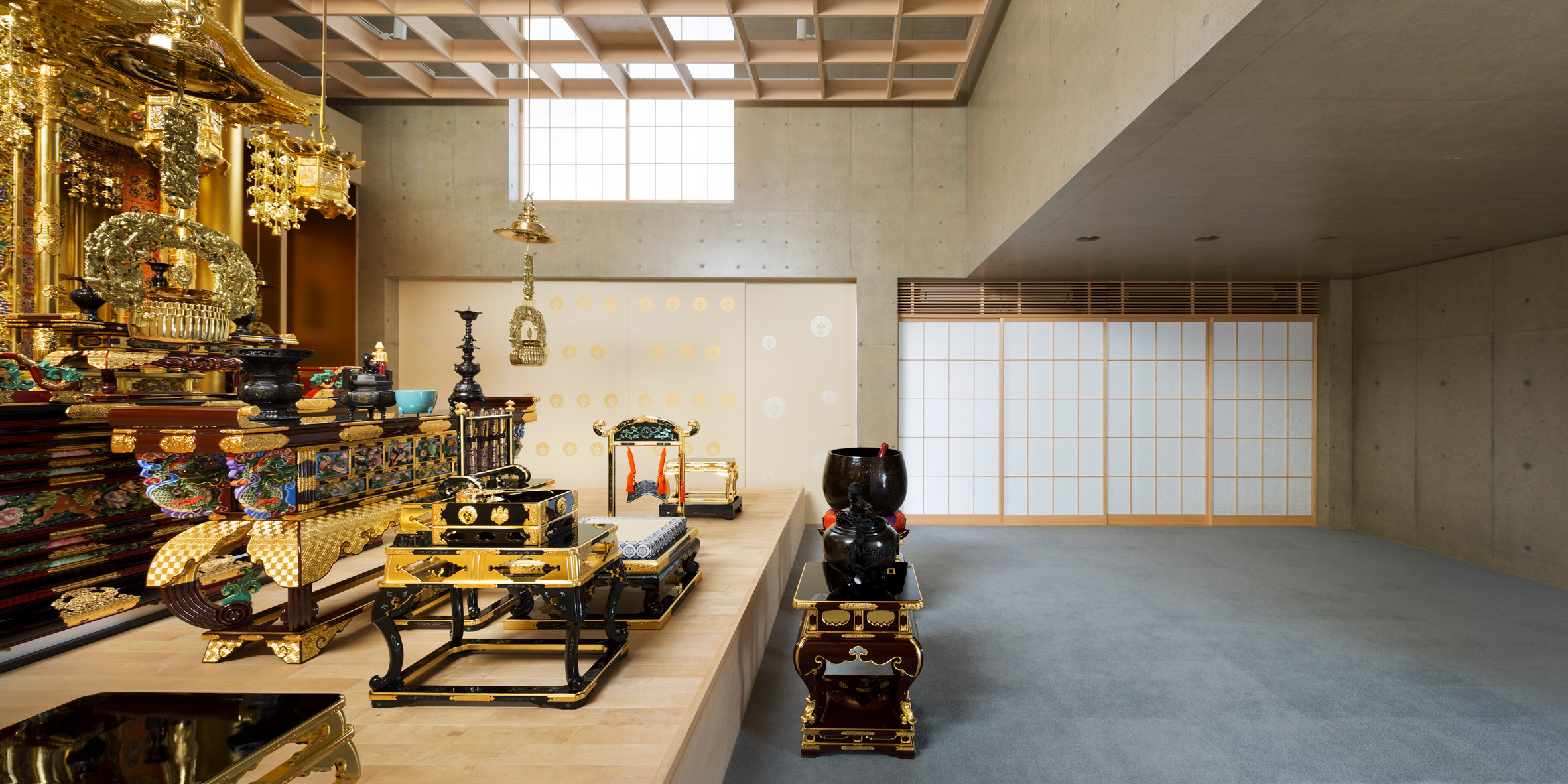 On the top floor, the priest’s residence contains a walled balcony space, described by the architecture studio as “like a courtyard floating in the air”.

While new builds present an opportunity to rethink the temple typology, there are also examples of dramatic renovations. In 2016, Satoru Hirota Architects extended an Edo period temple in Tokyo with a concrete events hall and priest’s quarters.

Furumori Koichi Architectural Design Studio designed another temple extension in Fukuoka prefecture with a flat roof of glass and latticed timber to contrast with the existing ornamental roof next door.