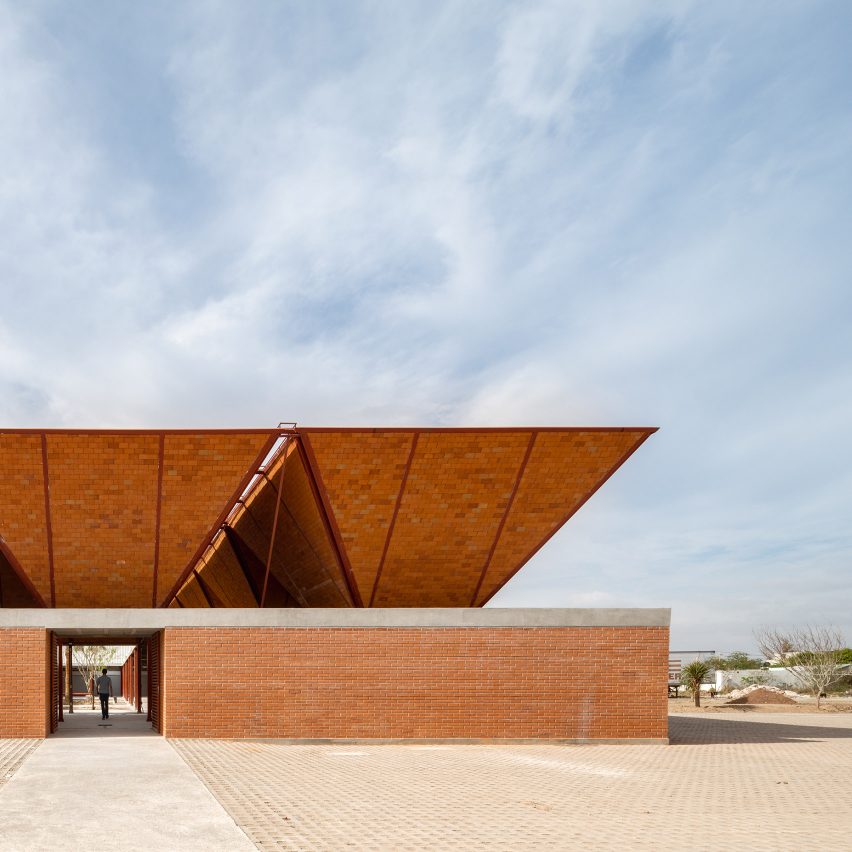 A group of designers known as Colectivo C733 has completed a brick shopping centre in northern Mexico topped with roof volumes that bring in daylight and allow hot air to escape.

Matamoros Market takes its name from the city where it is located – Matamoros, in the northeastern state of Tamaulipas – where it is set in a residential area on the outskirts.

The shopping centre was conceived for a competition calling for prototypes for public facilities in the country’s vulnerable areas.

While envisioning their proposal, the designers were influenced by a historic market in their local city.

“Designed in the manner of a plaza including a garden, the project recalls the old market of Mexico City, El Parián, built in 1688 where the Zócalo square now is,” said the studio.

Rectangular in plan, Matamoros Market consists of corridors and rows of stalls organised around a central courtyard. The building is set back from the street to make way for gardens and outdoor gathering space.

The perimeter wall is made of red brick, which helps protect the interior from solar heat gain – an important consideration given that temperatures in Matamoros can exceed 100 degrees Fahrenheit (38 degree Celsius) in the summer.

“This brick skin is reinforced by transversal walls that separate stands and generate doorways into the main hall of the project,” the team said.

The building’s distinctive roof is composed of inverted, trapezoid-shaped modules that the designers refer to as “umbrellas”.

The tops of the nine-by-nine-metre modules are open to the sky, enabling daylight to be funnelled to the market below, while also allowing for the escape of heat.

Prefabricated in an off-site warehouse, the modules consist of two materials.

The exterior is made of brick, which provides insulation. The interior layer, which faces the sky, is wrapped in light-toned, galvanised sheet metal – a material well suited for rainwater harvesting and heat reflection.

“The roof slope is calculated to reduce load-bearing and allow proper runoff for water and snow,” the team said.

Under the roof modules are orange-coloured pillars that are spaced nice metres apart, and form a hypostyle gallery within the market. The whole system is designed to withstand hurricanes and flooding.

The corridors within the facility are oriented to connect with neighbouring recreational venues. At the core of the market is the Oasis – an open-air garden with dry-weather vegetation that is irrigated with rainwater.

“It has a flexible patio that in time will grow thicker vegetation to enhance natural shading, thermal control and provide a new silent space within the city,” the team said.

The design for Matamoros Market stemmed from a competition calling for prototype ideas for public infrastructure in vulnerable areas, particularly in cities along Mexico’s northern border.

The competition was initiated by the country’s Secretary for Urban and Territorial Development (SEDATU) and hosted by the faculty of architecture at the National Autonomous University of Mexico (UNAM), where several members of C733 teach. All five members of the collective are former UNAM students.

The faculty invited 40 professors who have architectural practices to participate. The brief called for facilities that could be designed within three months and constructed within another three months. The design also needed to be replicable in different areas.

C733 says its design was guided by three overarching strategies – the use of lightweight, prefabricated elements; the ability for material variability, so the building can adapt to different locations; and flexibility in terms of spatial configuration.

“Rather than designing a particular type of building, we thought essential to offer a flexible system for the community, capable of strengthening social bonds and a sense of belonging,” the team said.

Other covered markets designed by architects include a stone-and-wood facility in France’s Rhône region designed by Elisabeth Polzella, and a glass-and-metal structure designed by LUO Studio to temporarily house a market in Puyang City, China.