While some architects have been experimenting with mushroom mycelium as a cladding material, architect Dirk Hebel and engineer Philippe Block have gone one step further – by using fungi to build self-supporting structures. 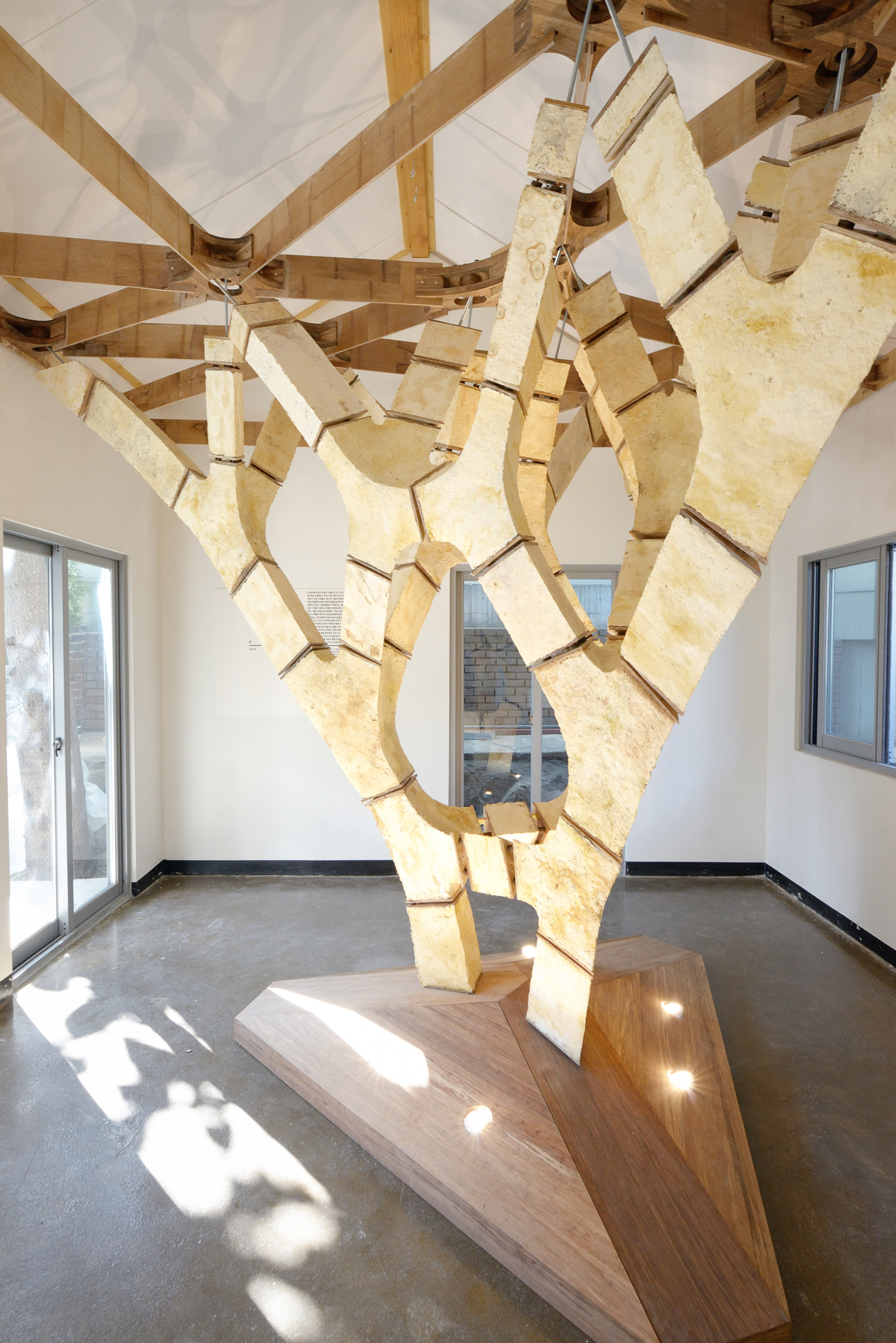 Hebel, who leads the Sustainable Construction unit at Karlsruhe Institute of Technology, and Block, who founded the Block Research Group at ETH Zürich, have created a tree-shaped structure consisting almost entirely of mycelium.

According to the duo, the material – which is formed from the root network of mushrooms – could provide the structure of a two-storey building, if it is designed with the right geometries. 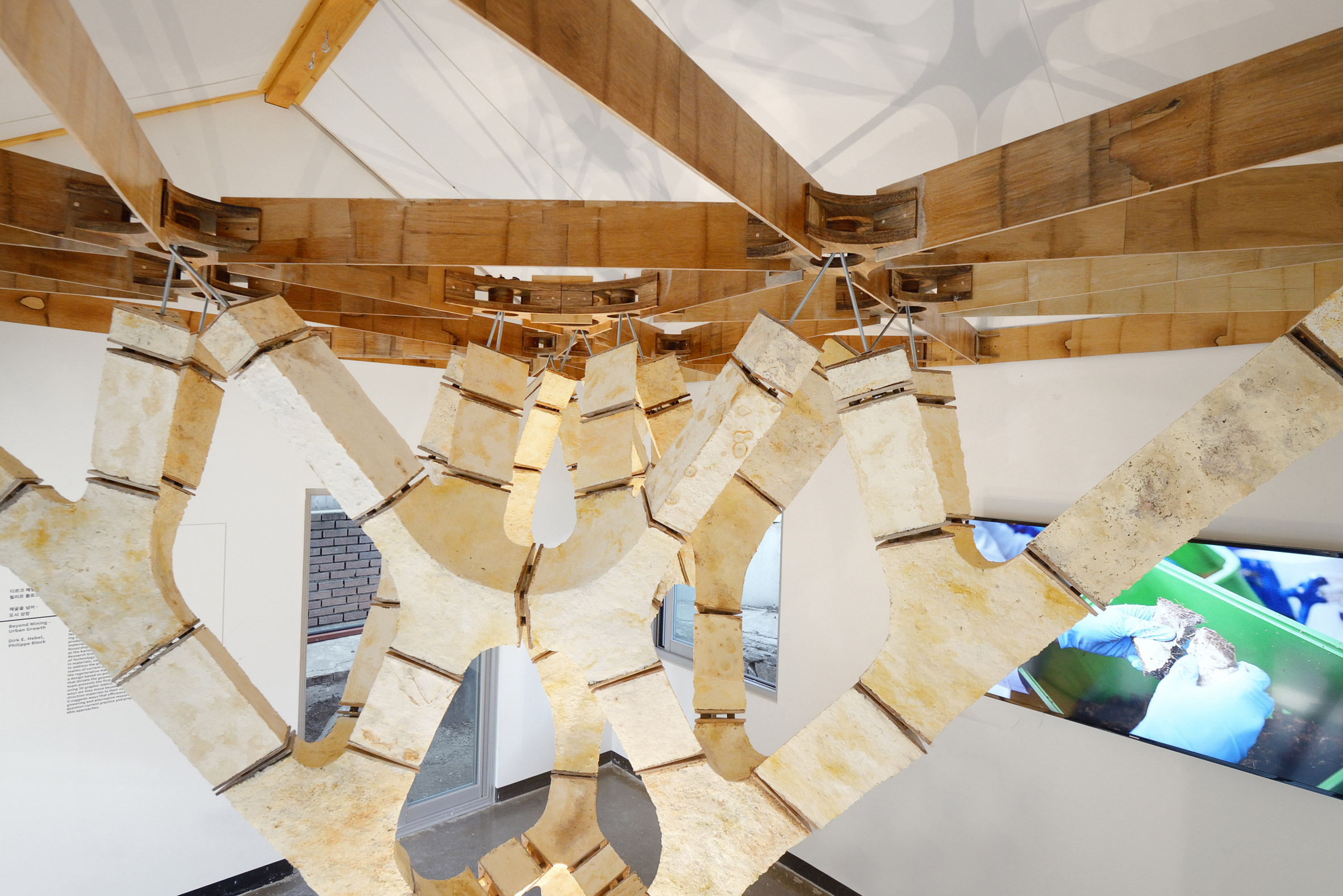 “We want to show that there might be alternative construction materials that don’t get us in trouble with our world, but that needs to go together with some kind of designing,” explained Block.

“In order to show the potential of new alternative materials, particularly weak materials like mycelium, we need to get the geometry right. Then we can demonstrate something that can actually be very stable, through its form, rather than through the strength of the material.” 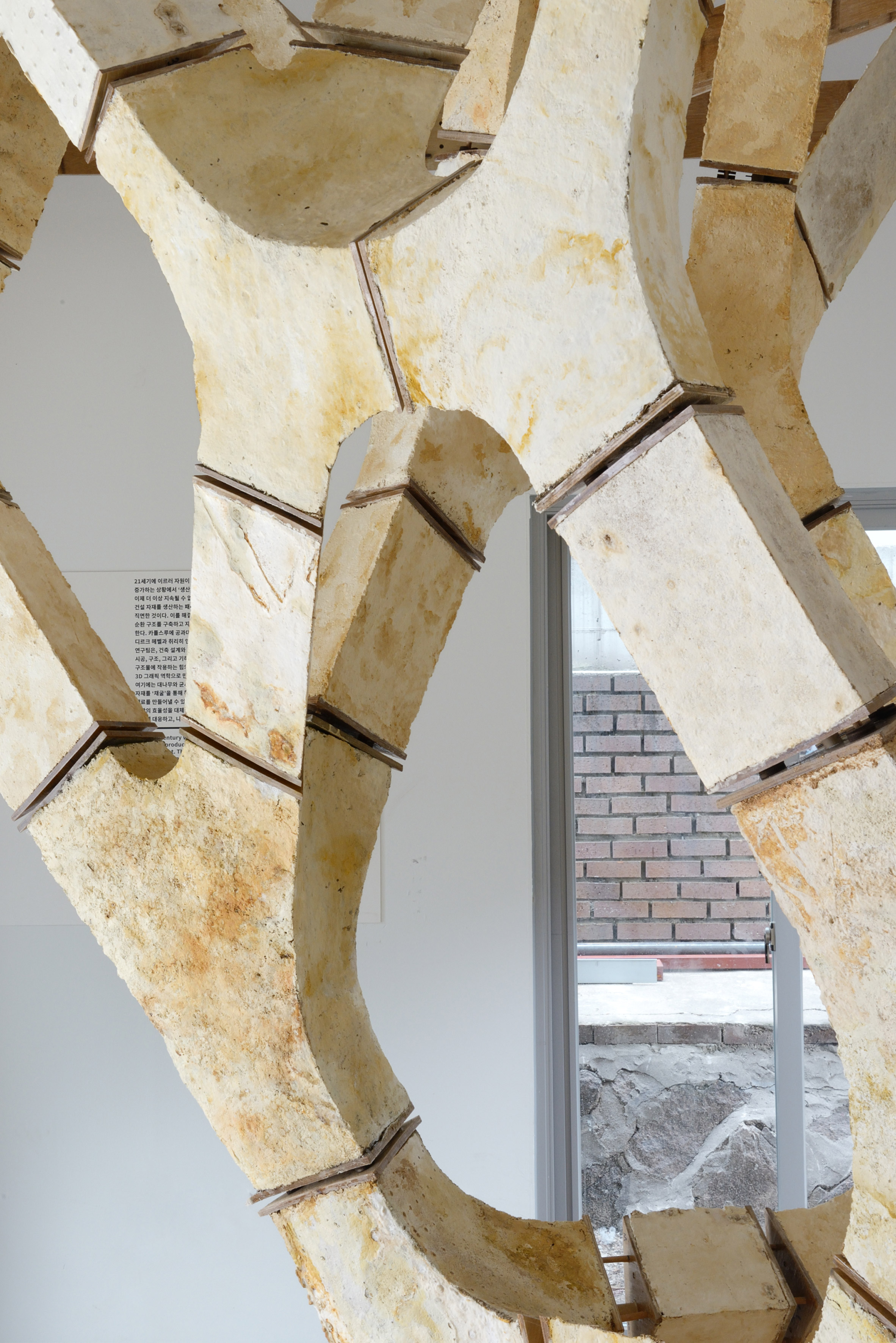 Mycelium has been used in a number of recent building projects. It formed the roof of a pavilion in India and was made into bricks for a MoMA PS1 pavilion. But few others have used it to create a structural framework.

Hebel and Block are presenting the idea as part of the inaugural Seoul Biennale of Architecture and Urbanism, which opened this weekend in the South Korean capital.

Their installation, called MycoTree, consists of dozens of mycelium components that support one another in compression. These components are attached to one another with a system of bamboo endplates and metal dowels – but it is the mycelium that is taking all the load. 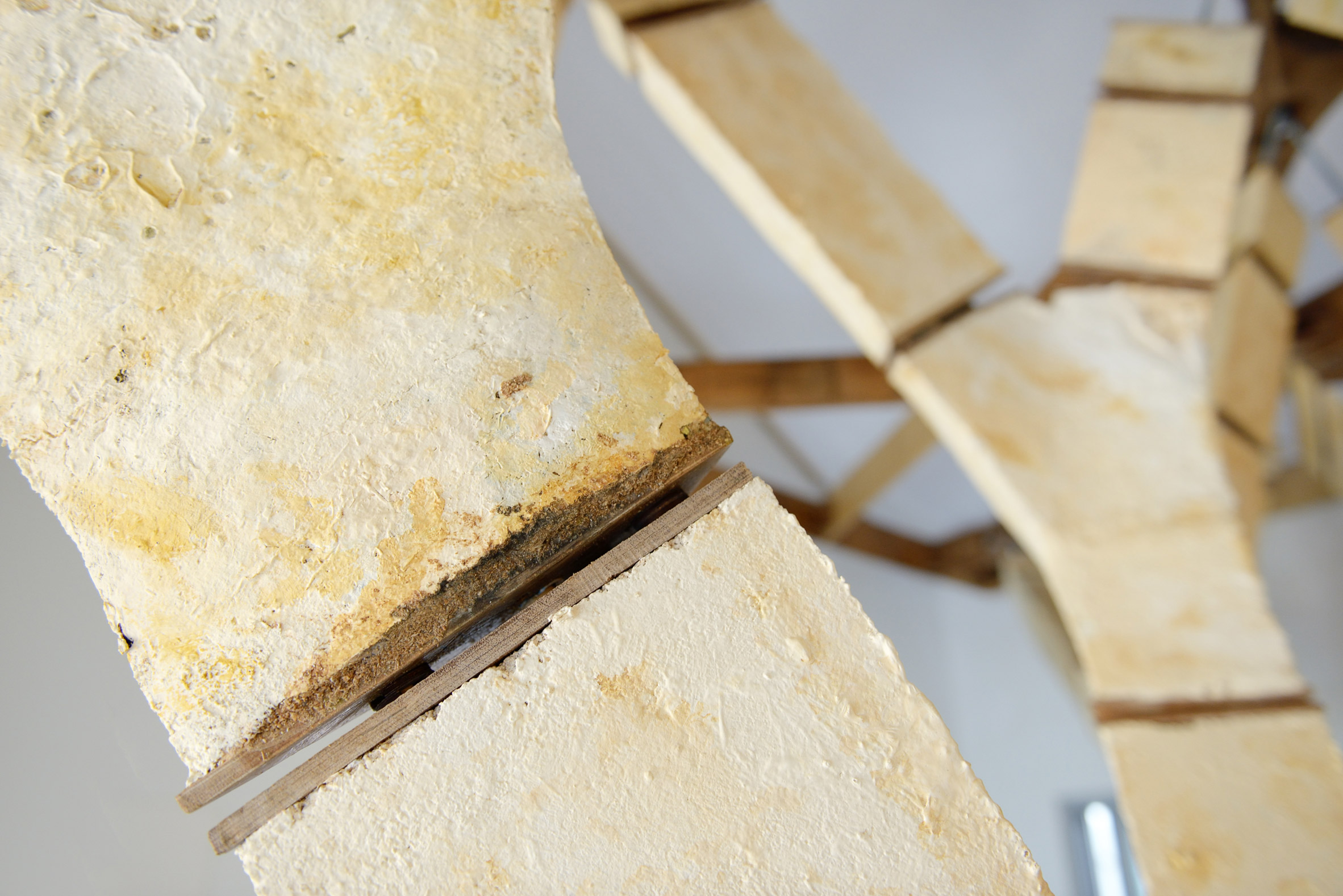 “What we have done here is quite extreme, because this is a really weak material indeed,” Block told Dezeen.

“You can actually use this weak material to build very neat spatial structures. If you use novel design techniques, you can make sure that every single component is kept together in compression,” he continued.

“In this case, we contrasted something naturally grown and messy with high-end digital fabrication.” 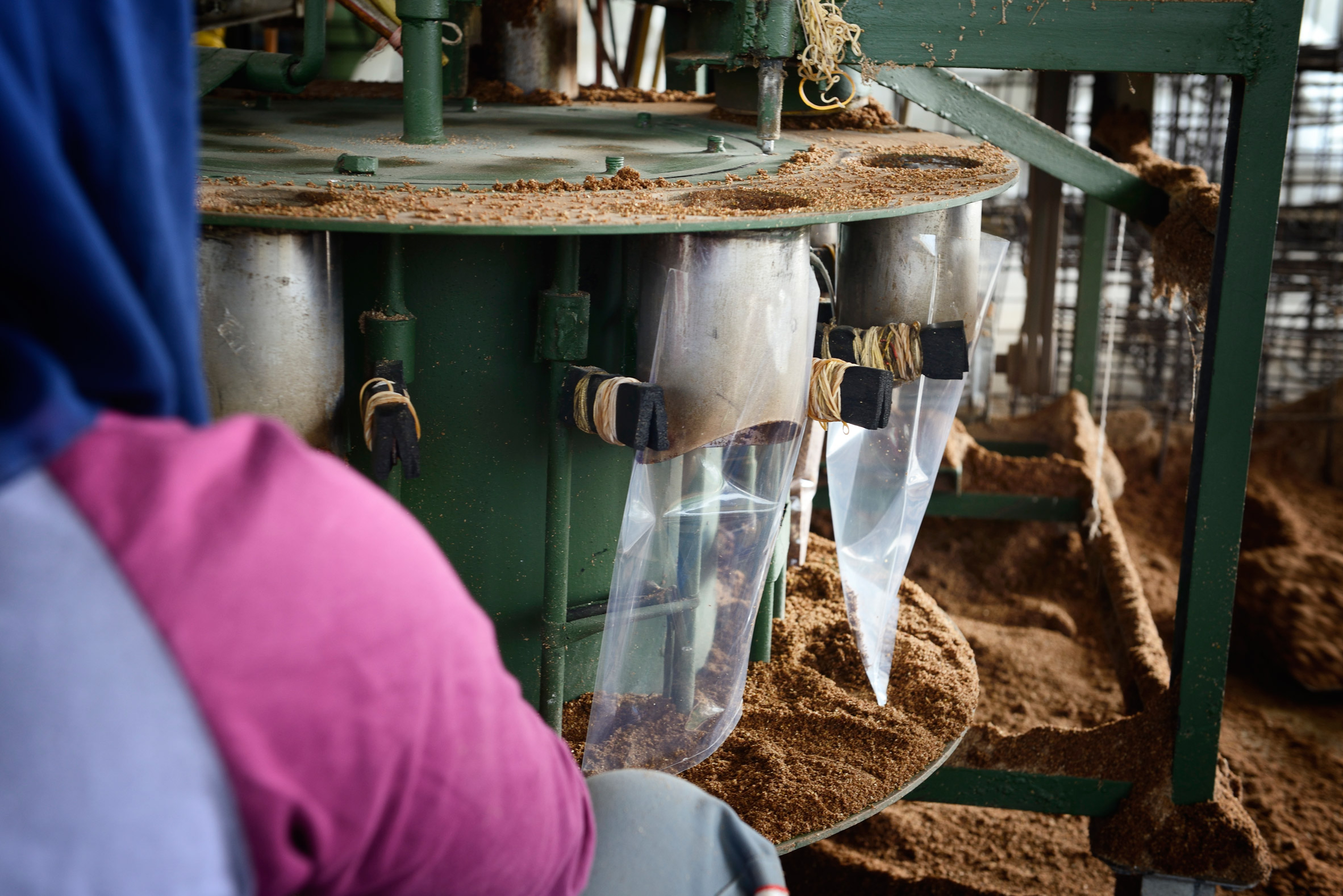 To create the blocks, mushroom spores are combined with a food mix that includes sawdust and sugarcane. The fungi consumes the nutrients, so after a few days it begins to transform into a dense and spongy mass. It is then transferred into moulds, where it continues to densify. 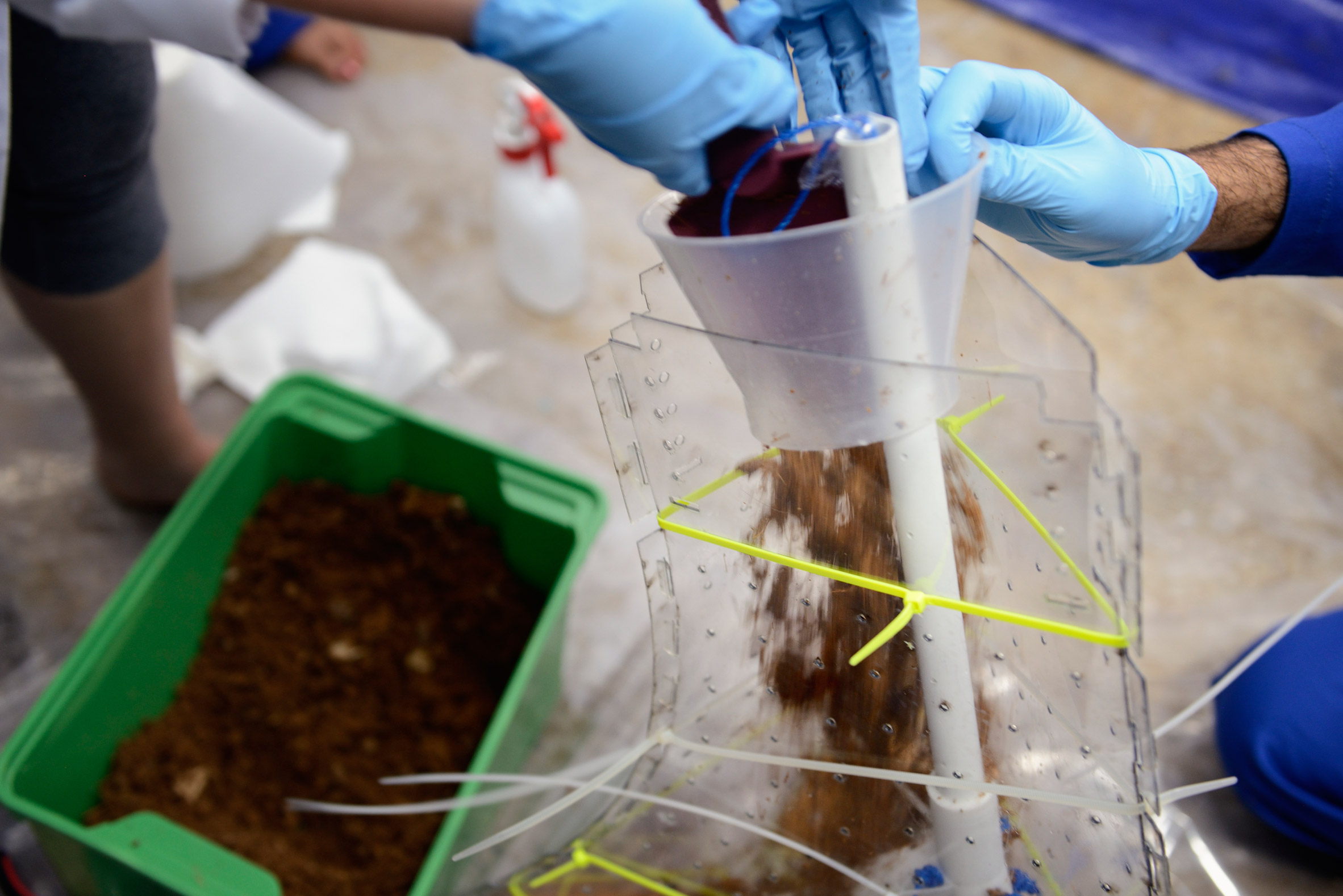 Once it has fully developed, the mycelium will develop a thick skin that helps to protect it. After this, the material can be dehydrated to kill the organism and stop the growing process. It can then be used as a building block.

“It take two weeks to grow any form, any shape you would like,” said Hebel. “It only needs a form, a little bit of biological residue and a little bit of knowhow, and then you can grow this in any place you can think of.” 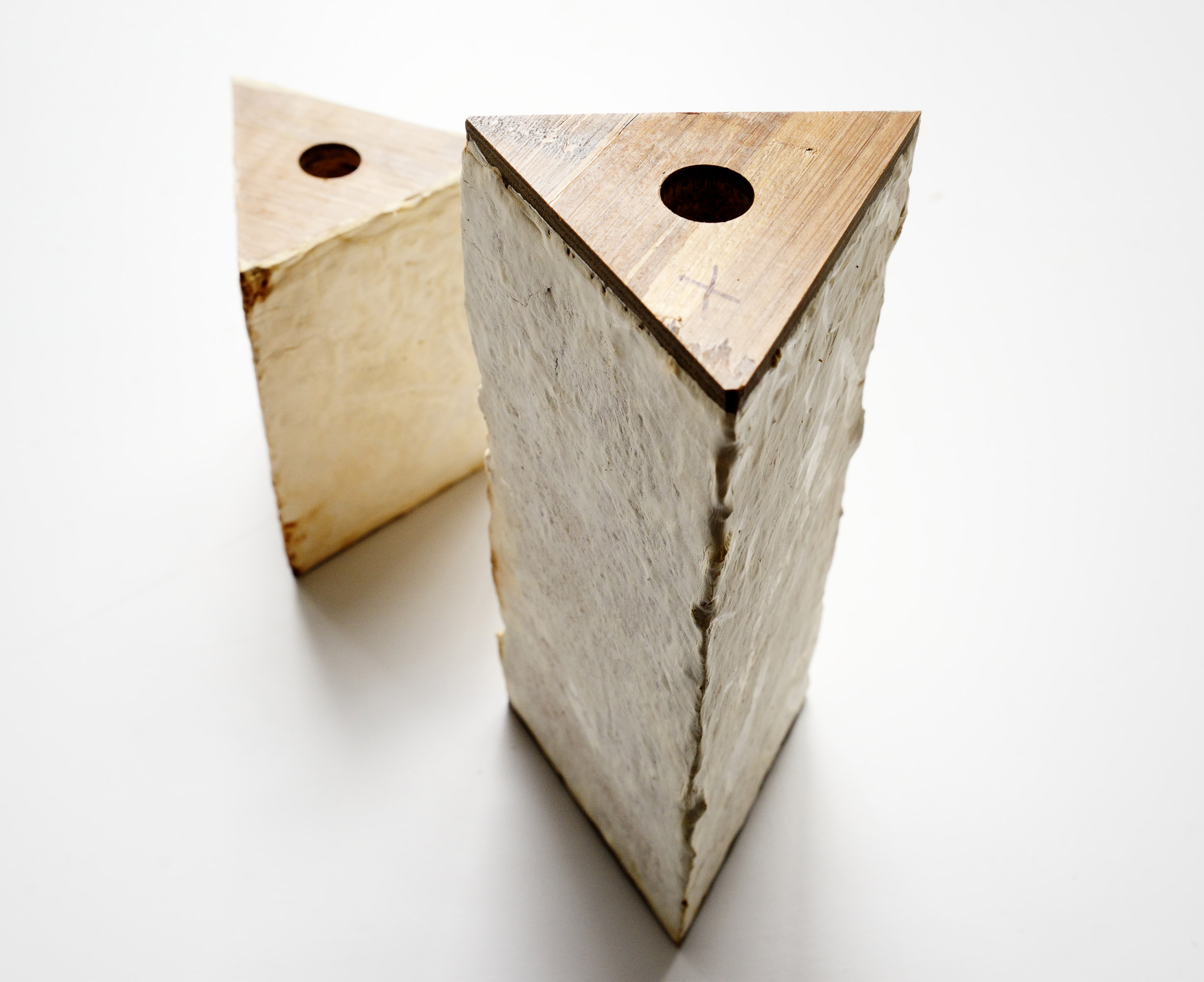 The blocks used for MycoTree were designed using a 3D modelling program developed by Block’s team, which has been previously used to build structural systems using materials ranging from stone to discarded drinks containers.

The templates for the moulds were sent to a mushroom farming company in Indonesia called Mycotech. The blocks were grown there, before being transported to Seoul for assembly. 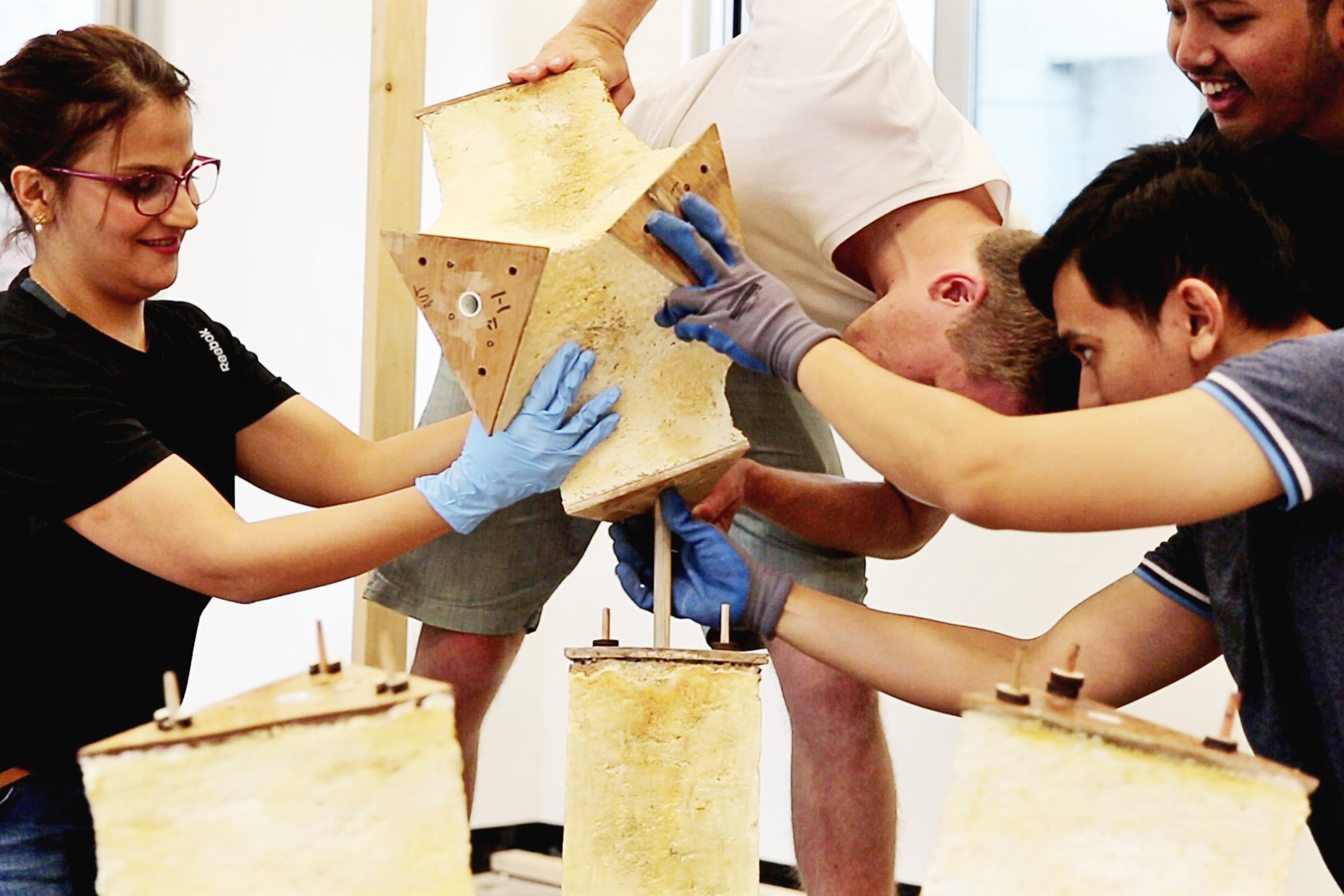 According to Hebel, these huge farms offer a pre-established system of infrastructure that could easily be tapped into by the construction industry.

But on the other hand, anyone with a CNC machine could potentially download the files for an open-source design and grow their own building structure.

“We think this could be used to create a structural element that could replace, not necessarily high-rise buildings, but a lot of two-storey building structures,” said Hebel. 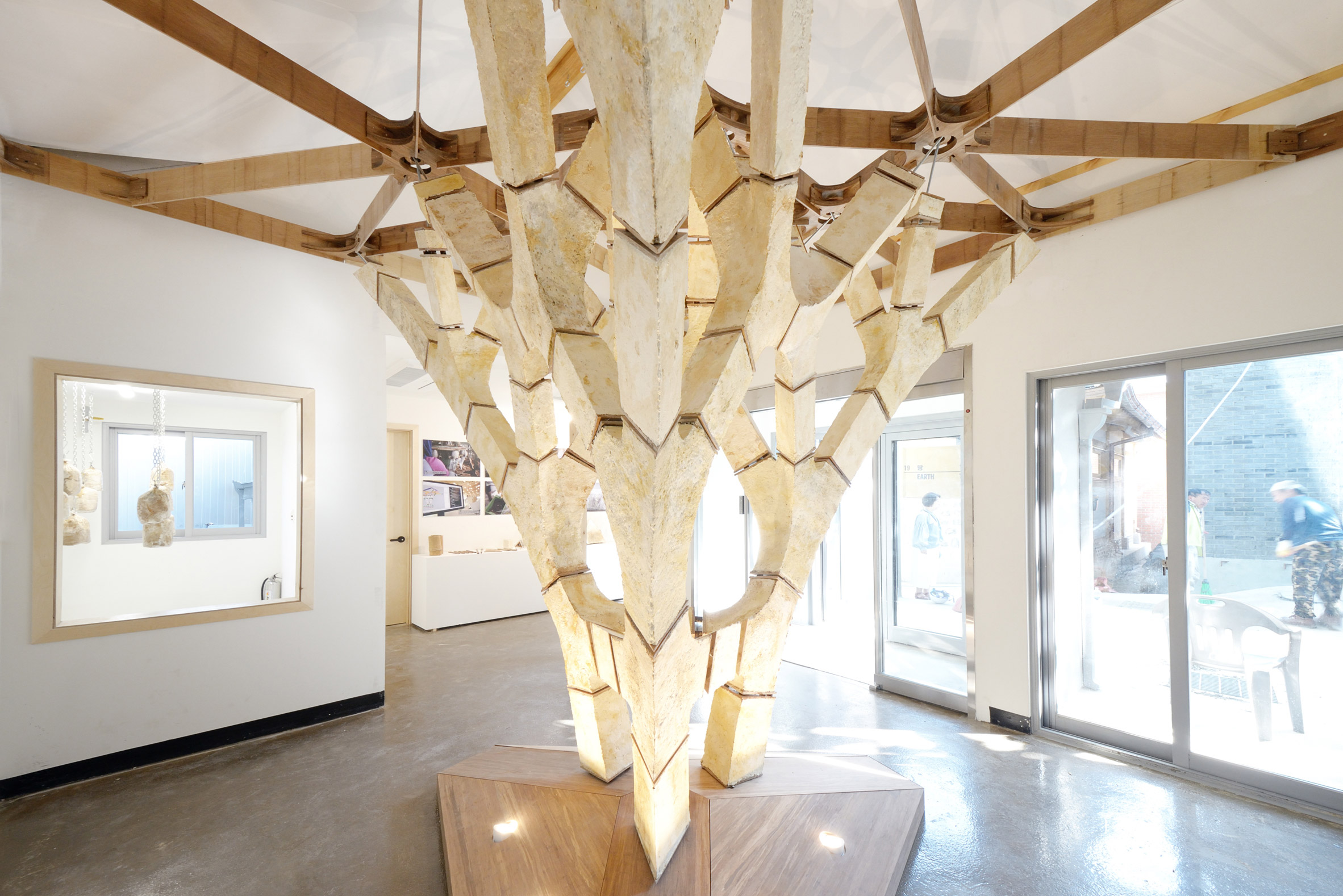 The team plans to continue researching the material, by testing the strength of different mushroom species, exploring the effects of different nutrient mixes, and experimenting with different growing conditions. They also want to establish chains of communication between other researchers, and inspire students to start their own research projects.

“What we try to demonstrate with all our prototypes and buildings is that we can achieve amazing things with humble means,” added Block. 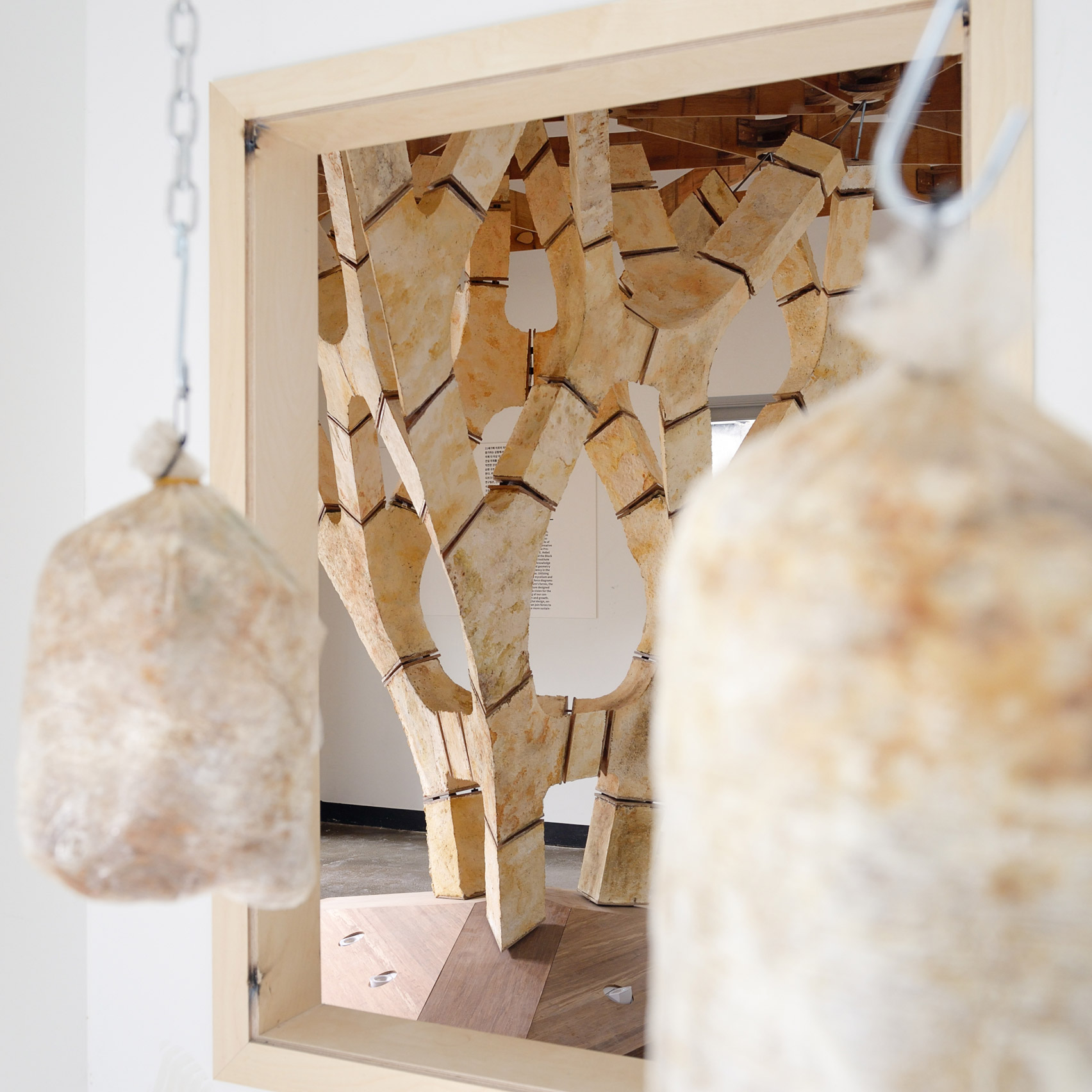 MycoTree is on show at the Donuimen Museum Village – one of the two main venues for the Seoul Biennale. The exhibition, which runs until 5 November 2017, looks at ideas and strategies set to shape the cities of the future.

The post Tree-shaped structure shows how mushroom roots could be used to create buildings appeared first on Dezeen.