Little-known Japanese architect Itsuko Hasegawa has been announced as the first laureate of the Royal Academy of Arts‘ architecture prize.

Described as one of Japan’s most important architects by the award’s jurors, Itsuko Hasegawa founded her Tokyo-based practice in 1979 but remains relatively unknown.

“What I find most interesting about the architecture of Itsuko Hasegawa is the spirit of invention,” said architect Louisa Hutton, who chaired the Royal Academy Architecture Prize jury.

“Her buildings exude an optimism that could be interpreted as utopianism. Hasegawa seems to be speculating how one can change the world through architecture,” she continued.

“As a jury we were unanimous in our decision, all agreeing that Hasegawa is an architect of great talent who has been under recognised. Through this prize we hope to bring her the much-needed recognition she deserves.”

The experimental form of Hasegawa’s architecture has roots in her early links with Japan’s forward-thinking Metabolist architects, including Kenzo Tange, and with her work at the practice of Japanese architect Kazuo Shinohara.

Among her key works are the Sumida Culture Factory (Tokyo, 1994) and the Yamanashi Museum of Fruit (Yamanashi, 1994), which both feature vast sphere-shaped buildings.

While Hasegawa may not be a household name, her work has been widely decorated within the profession. She had been awarded the Japan Art Academy Award and a Japan Cultural Design Award, and has also been given honorary fellowships from the Royal Institute of British Architects, University College London and the American Institute of Architects.

The Royal Academy Architecture Prize, as well as the new David Chipperfield-designed architecture centre, come thanks to a seven-figure donation from the Dorfman Foundation. Another new prize has also been created in honour of the charity – the RA Dorfman Award for emerging architects.

The same panel of jurors has drawn up a shortlist for this award, the winner of which is to be announced at the beginning of July, when Hasegawa will also give an address to mark her receipt of the Royal Academy Architecture Prize.

The shortlist for the Dorfman Award, which “champions global talent that represents the future of architecture”, includes practices from Columbia, Japan, Iran, Ethopia, and the Netherlands and Bahrain. 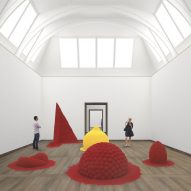 “Together [the awards] open both the public and the profession’s eyes to the exceptional work of less widely recognised architects,” said Kate Goodwin, the head of architecture at the RA.

“Architecture has been a core element of the Royal Academy of Arts since its foundation in 1768, and these awards, coupled with the reinvigorated Architecture Programme and our new spaces offer, place the RA back at the heart of a global discourse on architecture and the key role it plays in our society.”