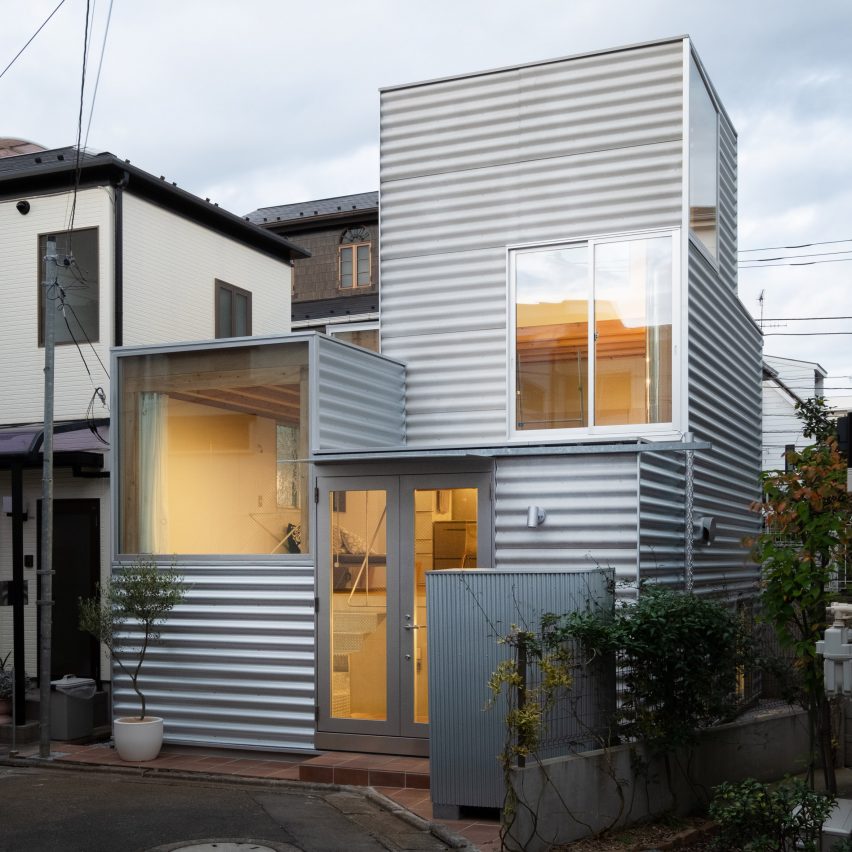 Named House Tokyo, the house was designed to make most of a small plot of land in a densely populated area of the Japanese capital.

“With the building area of just 26 square metres we used the small space to its maximum,” Unemori Architects founder Hiroyuki Unemori told Dezeen.

“You have to be experimental and clever with regards to its utmost usage and we looked towards how diverse and extendable the space could be within the tiny plot.”

The studio designed the house around a geometrically structured wooden framework with the upper floor set back from the street to create a small terrace.

All of the outer walls were made from cement clad in industrial corrugated galvinised steel.

Although it was built in a dense urban area, where neighbouring buildings are close by, House Tokyo was placed slightly away from the sight boundaries to allow more light into the house.

“The exterior wall of House Tokyo is partly offset from the dense surrounding houses,” Unemori explained.

“The small gap between the neighbouring houses brings a view to the sky, wind circulation and of course sunlight.”

Large windows open the house up to its surroundings and break up the corrugated-iron facade.

“As the windows are oriented in different directions, various daylight atmospheres fill the room throughout the day,” Unemori said.

Inside the house, ceiling heights range from 1.9 metres to 4.7 metres with the house’s wooden structure has been left visible as a decorative detail.

“The differing ceiling heights within the suspended inner wooden structure and the distance to other buildings were challenges, as well as the task of designing a pleasant living experience in such a small space,” Unemori said.

The house has a total floor area of 51 square metres, spread over two floors.

A bedroom, bathroom and storage area were located on the semi-basement ground floor, while the open plan kitchen and dining areas are housed on the first floor.

The house was built as a private residence, but the owners plan to eventually rent it out, so Unemori Architects designed the bedroom so that it can be divided into two rooms if needed.

As the owners lead a busy life, the small footprint of the flat isn’t an issue.

“The client has a very urban lifestyle, such as eating out and using public bathing facilities, so the city is their extended house,” Unemori explained.

“They use the House Tokyo for sleeping, working and living.”

Photography is by Kai Nakamura.