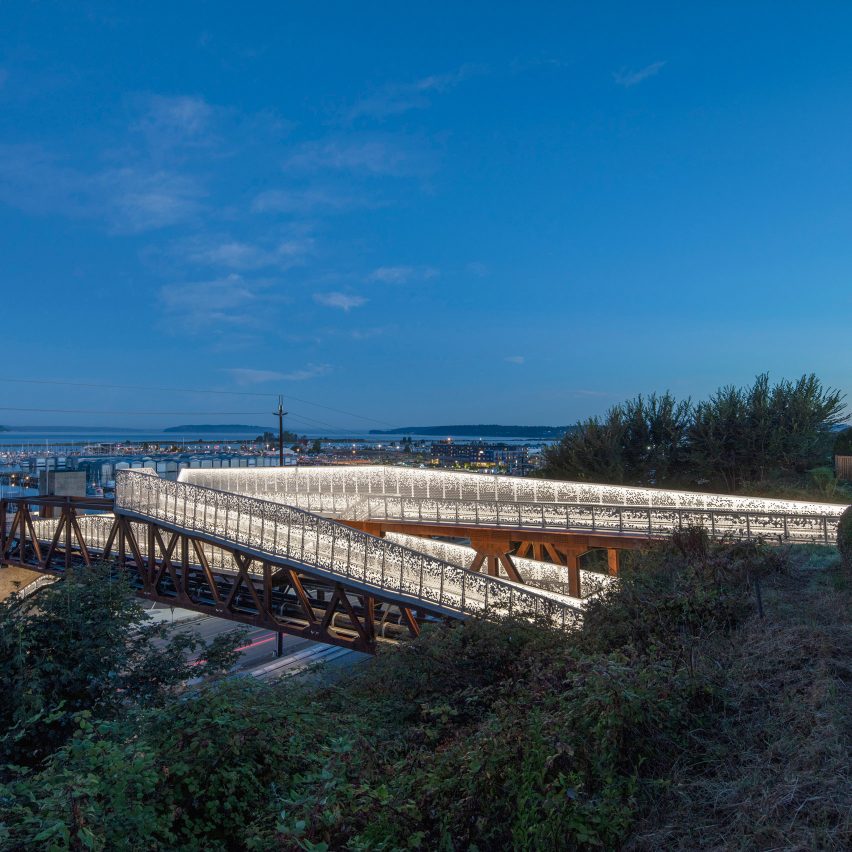 LMN Architects has built a viewpoint on top of the concrete and weathering steel New Grand Avenue Park Bridge in Everett, Washington.

The asymmetrical bridge spans a railway and a road, projecting from a hillside at one end and meeting a concrete tower at the other.

Seattle-based LMN Architects designed the 257-foot-long (78 metre) bridge to doubles as a viewing platform that frames views of the sunset over the waterfront.

Visitors can now cross between the historic Grand Avenue Park and the sea, easily traversing an 80-foot (24 metre) drop, freight rail tracks and a five-lane highway.

The truss form of the bridge is designed to echo traditional railway architecture across the Pacific Northwest.

Made from weathering steel, the beams will naturally rust over time to form a protective layer and make the bridge easier to maintain.

A guardrail made from 400 perforated steel panels contrasts with the weathering steel. Designed to act as a wayfinding tool for pedestrians, the steel screen is covered in intricate geometric patterns that throw patterns of light and shade onto the walkways.

The architects used a computer script to generate the pattern and automate the layout of the panels for cutting with the fabricator’s CNC machine, after testing the process in-house.

“LMN’s experimentation with our own CNC machine to fabricate full-scale mockups was essential for refining the scale of the pattern, adjusting the amount of area for the light reflection, and testing the digital cut files,” said LMN principal Scott Crawford

“This close collaboration allowed for a solution that is finely tuned to its context.”

The pattern extends to the tower, where it has been blasted into the concrete walls. A staircase wraps around the tower, and an elevator leads down to ground level.

With the ramping accessway at the other end, New Grand Avenue Park Bridge is designed to be accessible by people with more limited mobility.

“As designers, we found these circumstances the perfect opportunity to create a place where the accessible features would define the experience,” said LMN partner Stephen Van Dyck.

“In its design, the Grand Avenue Park Bridge is also a destination. The bridge’s paths, stairs and spaces create a variety of views beyond and within that make it a place of discovery.”

Recent projects from the firm include a performing arts centre for the University of Iowa and an extension for an art museum in Seattle.

Photography is by Adam Hunter.