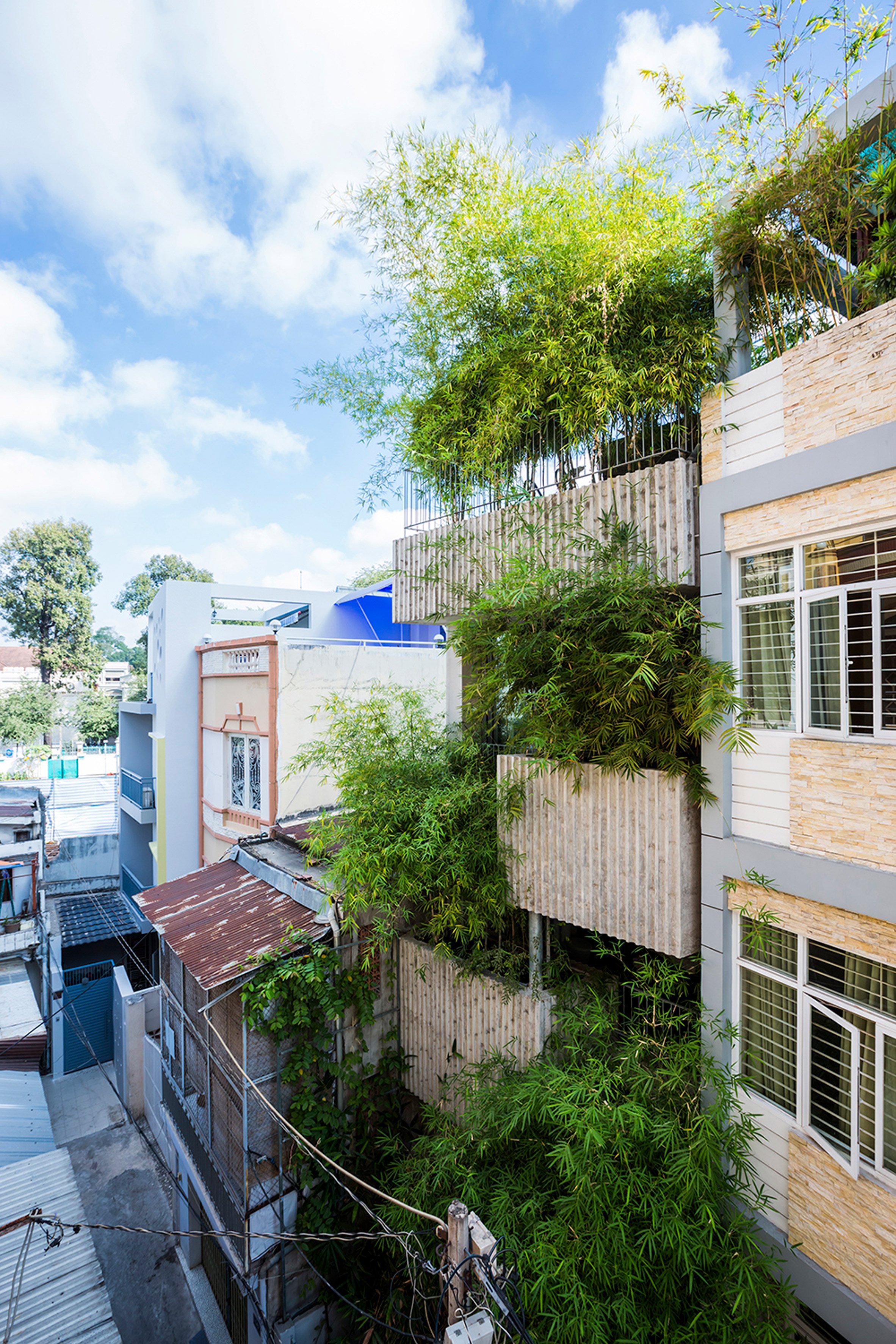 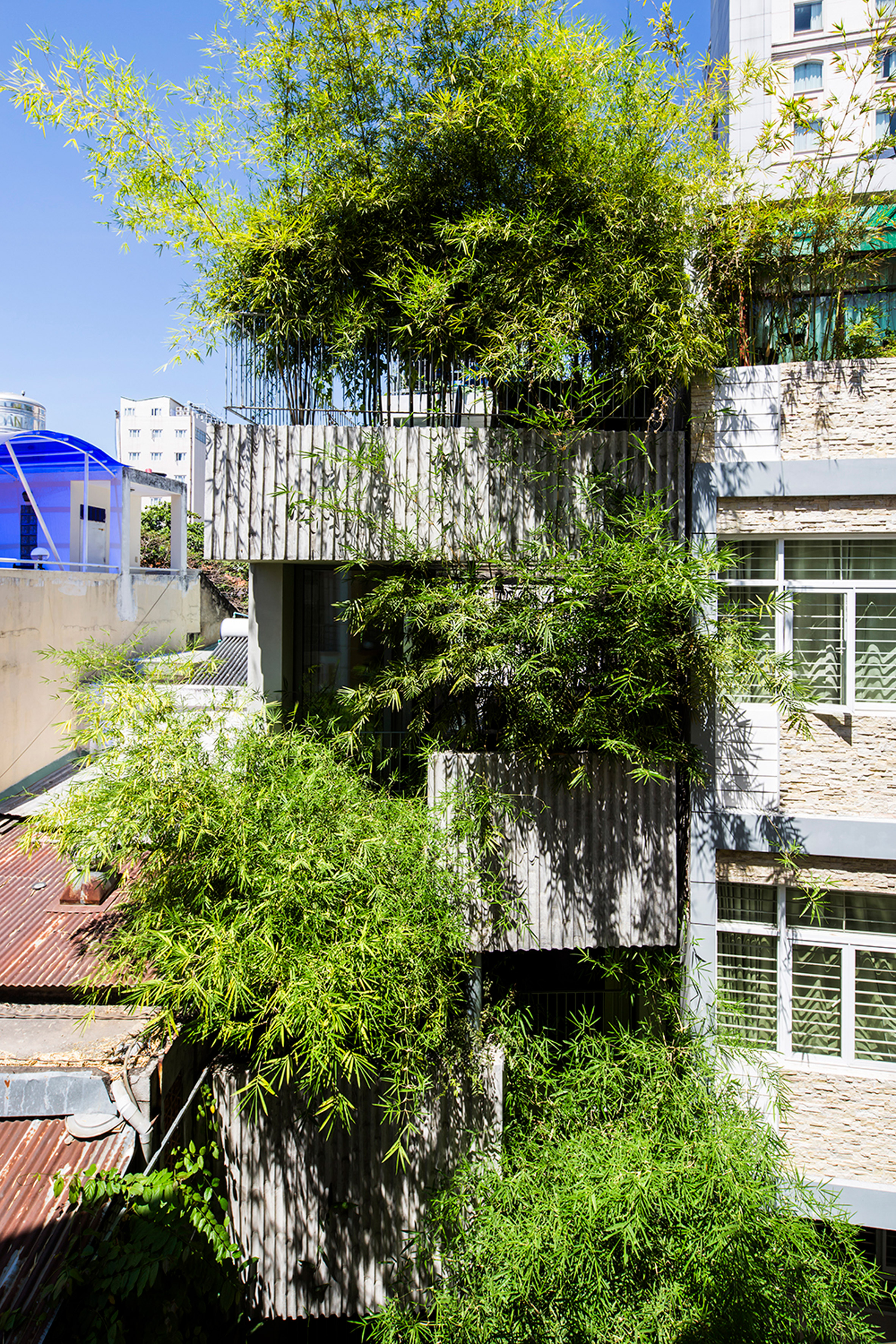 It includes a number of ways to integrated planting in houses, like interspersing terrace gardens at different levels and creating a stepped roof garden.

The first design, called House for Trees, was made entirely from plant-pot-like concrete boxes where trees grow, which the firm has now adapted in Bamboo House. 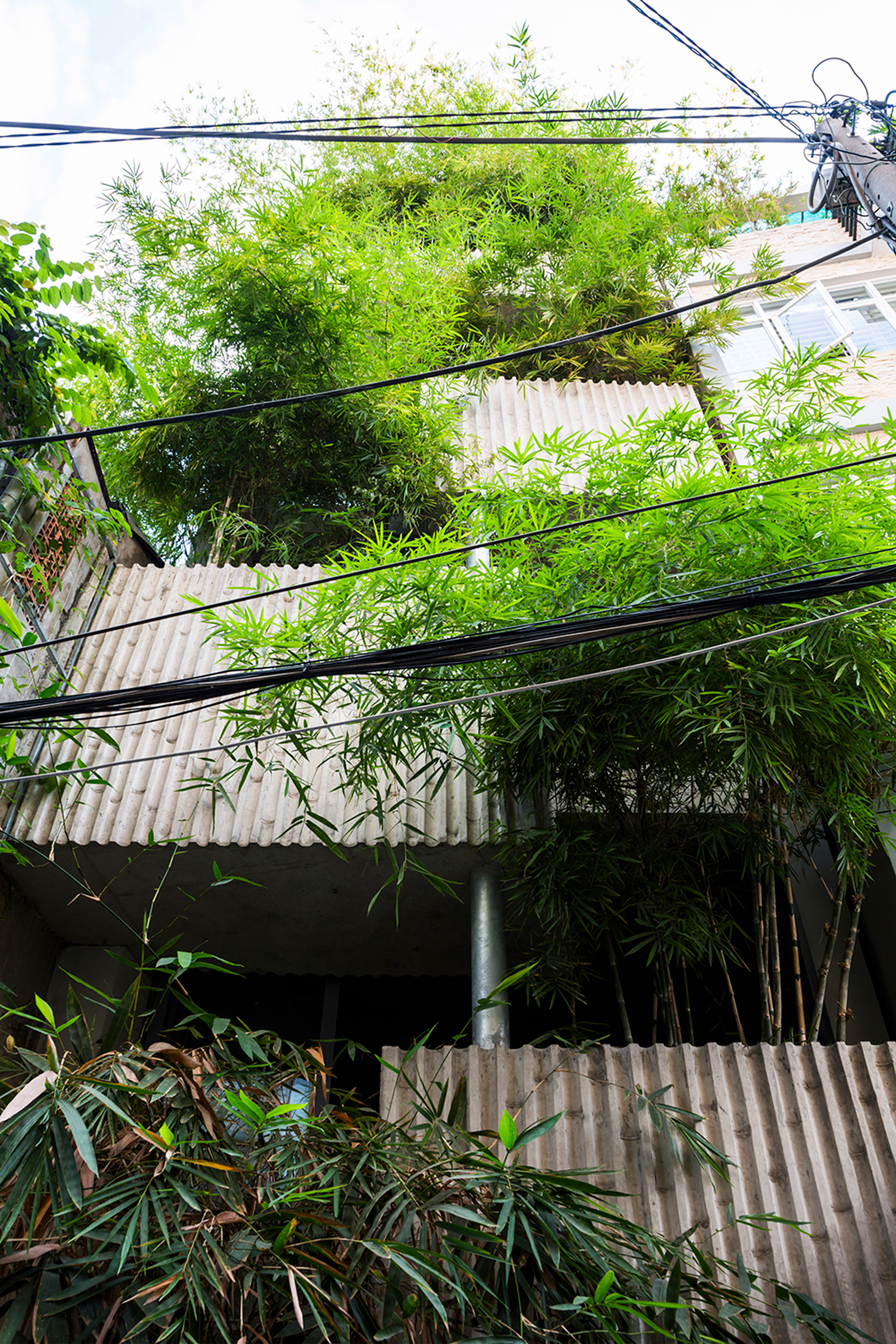 The aim for this project was to bring greenery into Ho-Chi-Minh City’s narrow disused alleyways known as hem, which the studio describes as being “ravine-like” due to the tall buildings that frame them.

The architects also chose bamboo to reference a long tradition of building with the material in the far east. 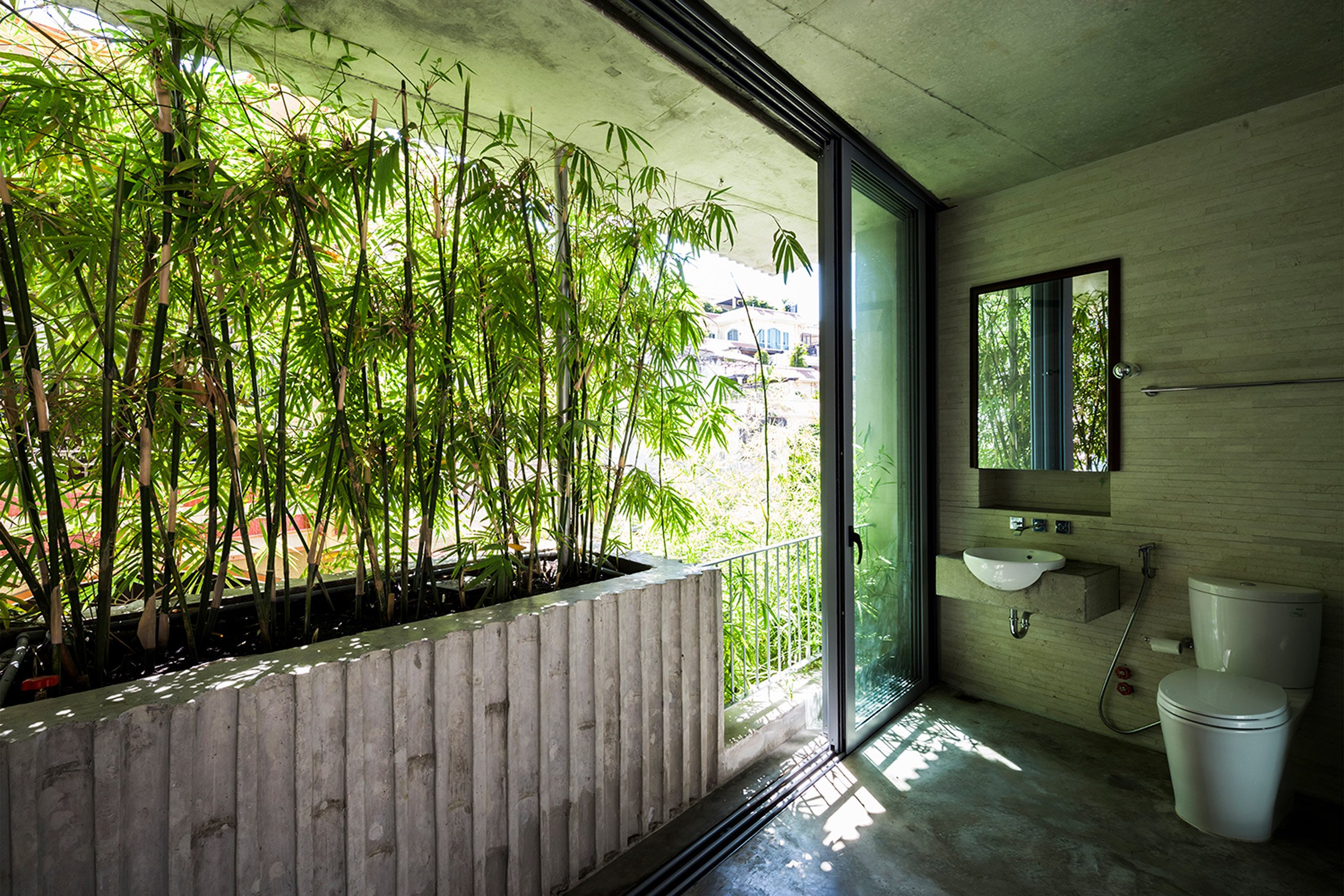 “The lanes are lined with imposing forms, and their cold facades give the street a dense and weighty aura,” explained VTN.

“Bamboo house has been designed to create a comfortable living space in spite of the limited area available.” 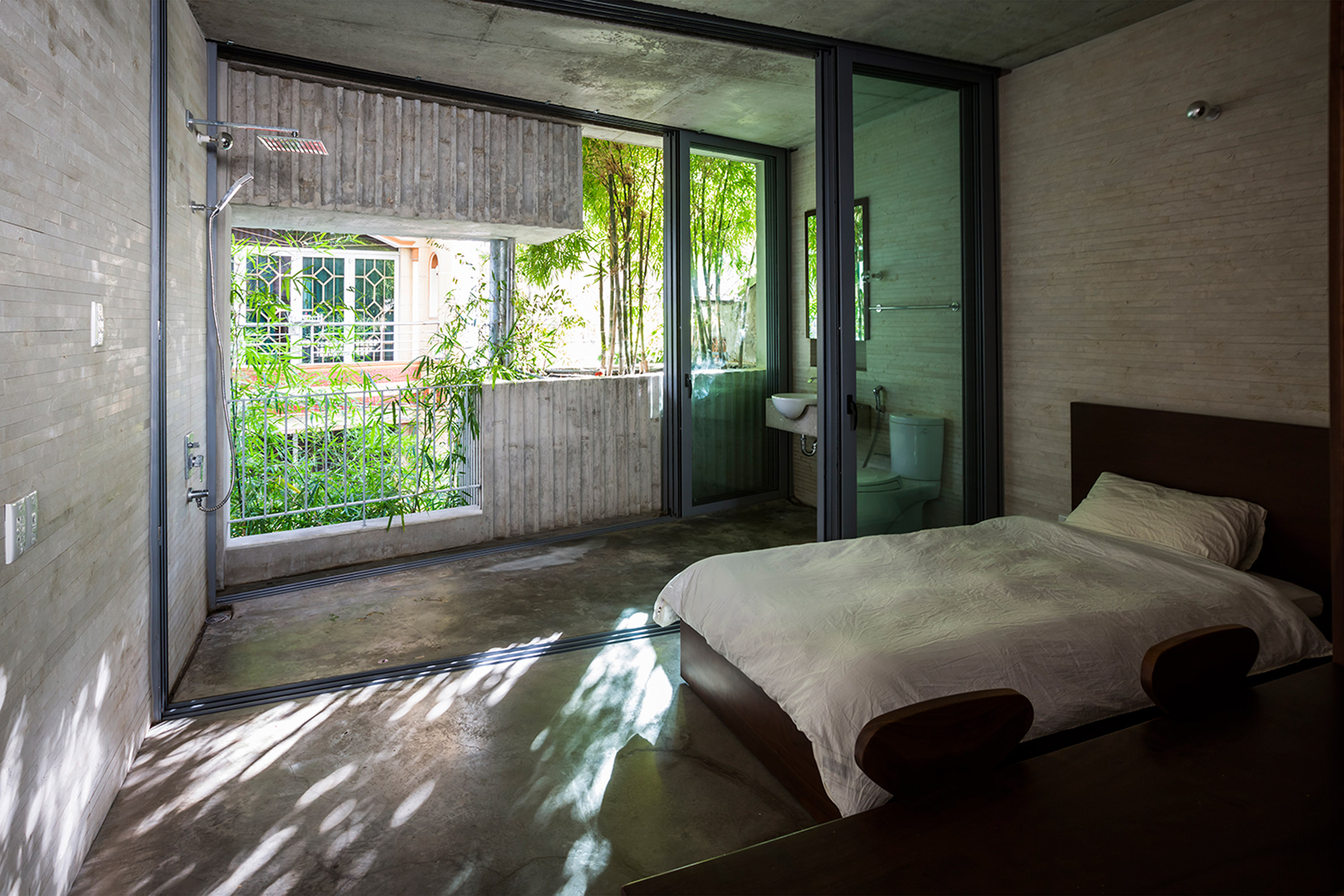 Bamboo plants grow up the street-facing side, nearly covering the five-storey residence. The large concrete planters they sprout from are indented with deep vertical grooves formed around bamboo poles.

“In addition to growing bamboo on the front facade, the concrete formwork is also made by using bamboo to allow a consistent design language,” said the firm.

“The bamboo texture also helps to reduce the intense and heavy appearance of conventional concrete wall and thus, improves the overall aesthetic quality of the house.” 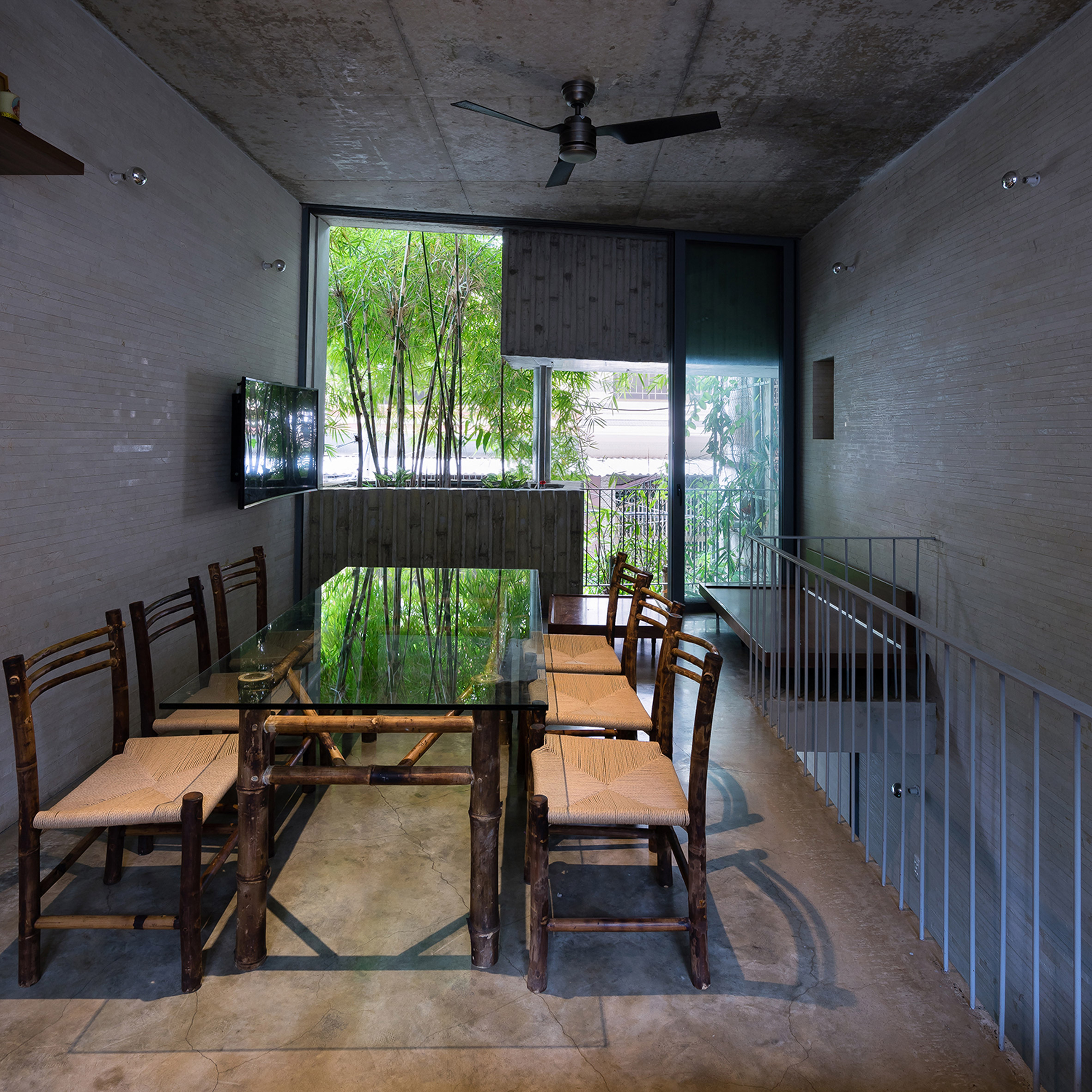 The planters are stacked up on metal pole supports – two alternate on the lower levels, while the one above runs across the entire top floor.

The plants act as a screen, protecting and shading the residence from strong sunlight, and the harsh rains during the tropical season. 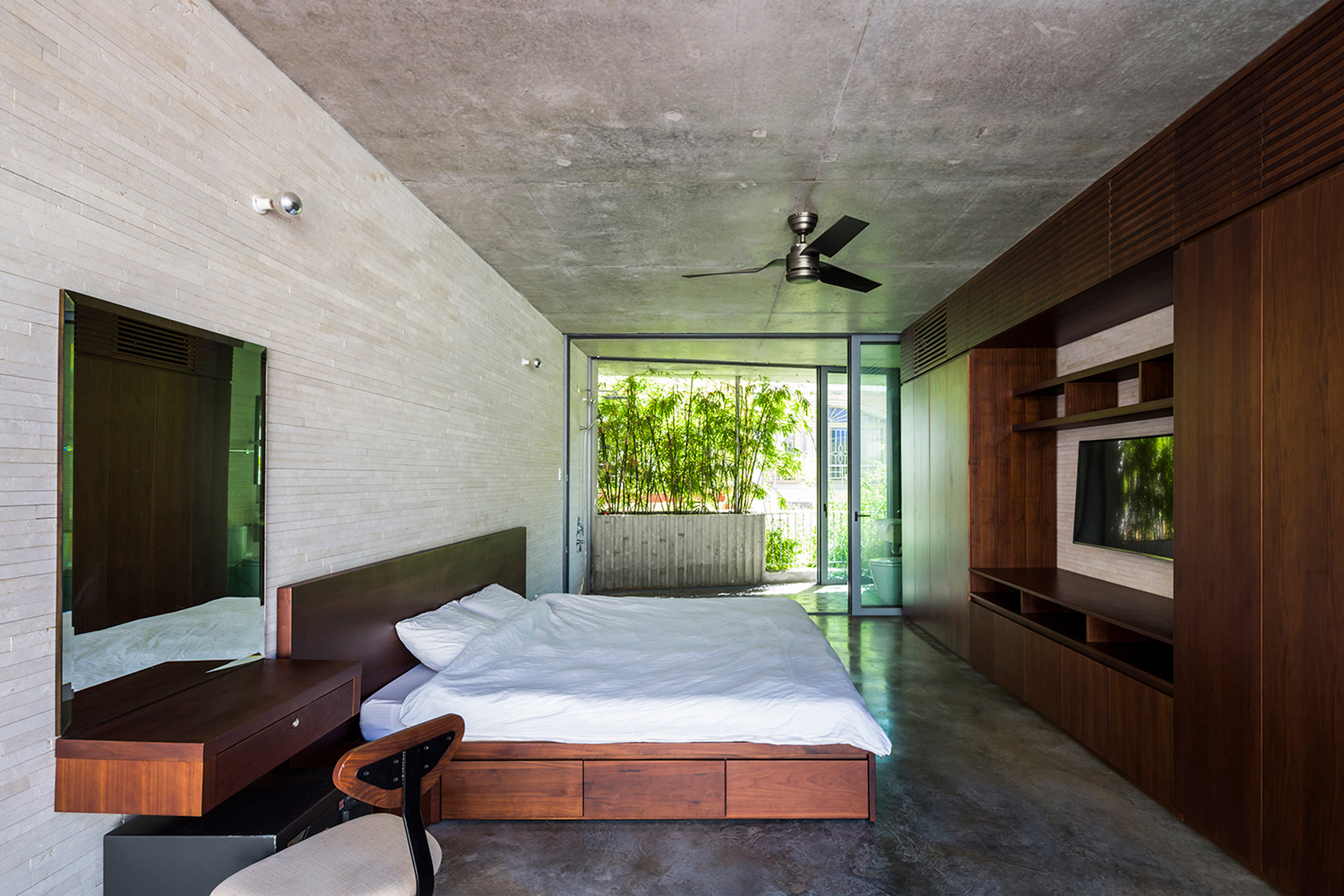 More planting at the rear of the residence covers the staircase, offering the spaces inside privacy.

On the third floor, the master bedroom’s en-suite bathroom has large glazed walls to the street below. A second stretch of glazing partitions the bedroom behind to allow plenty of natural light in. 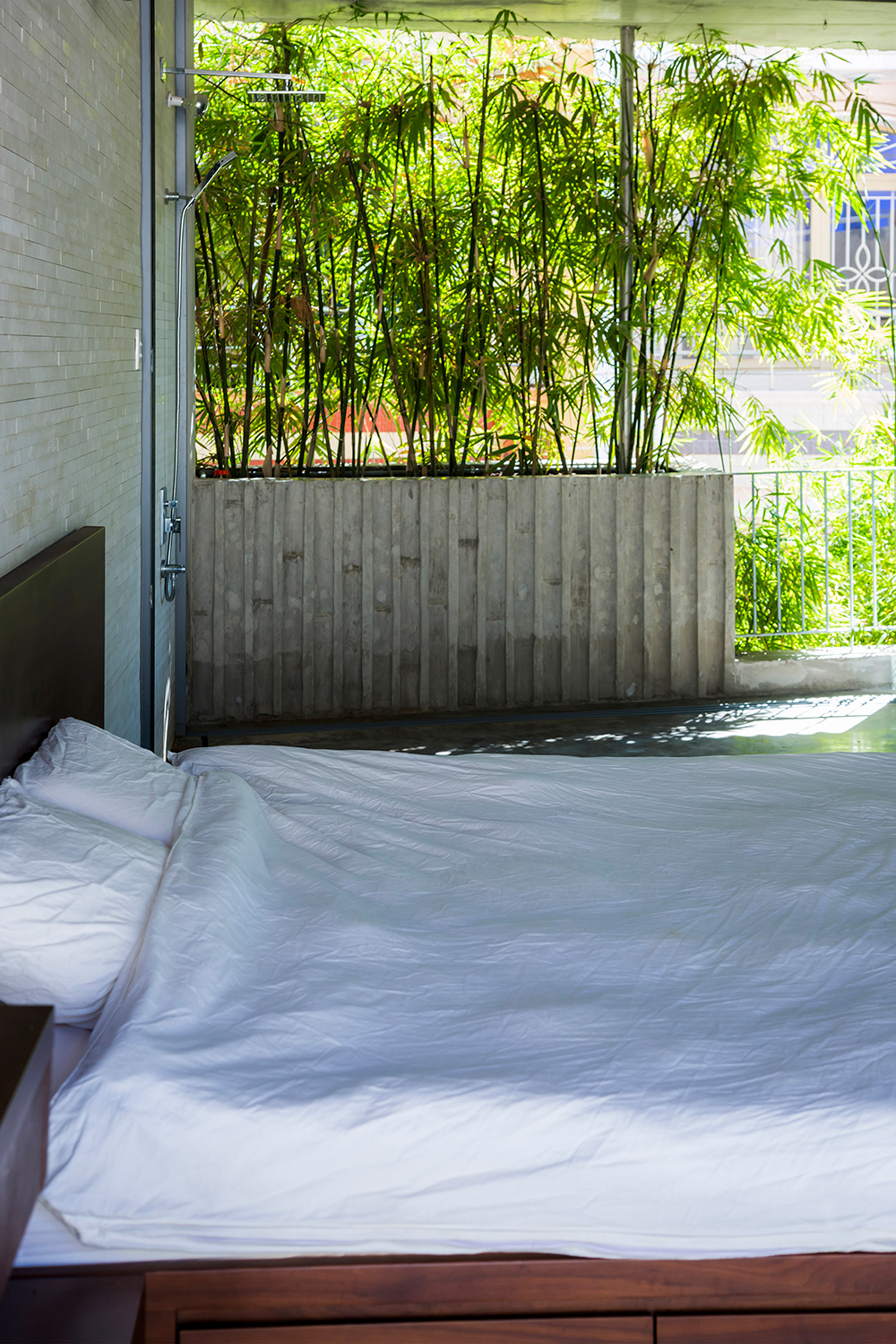 A similar layout features in the children’s twin bedrooms on the floor below, while the guest room and bathroom is placed to the rear of the ground floor.

The design enables the residents to open both sides of the building for natural ventilation. 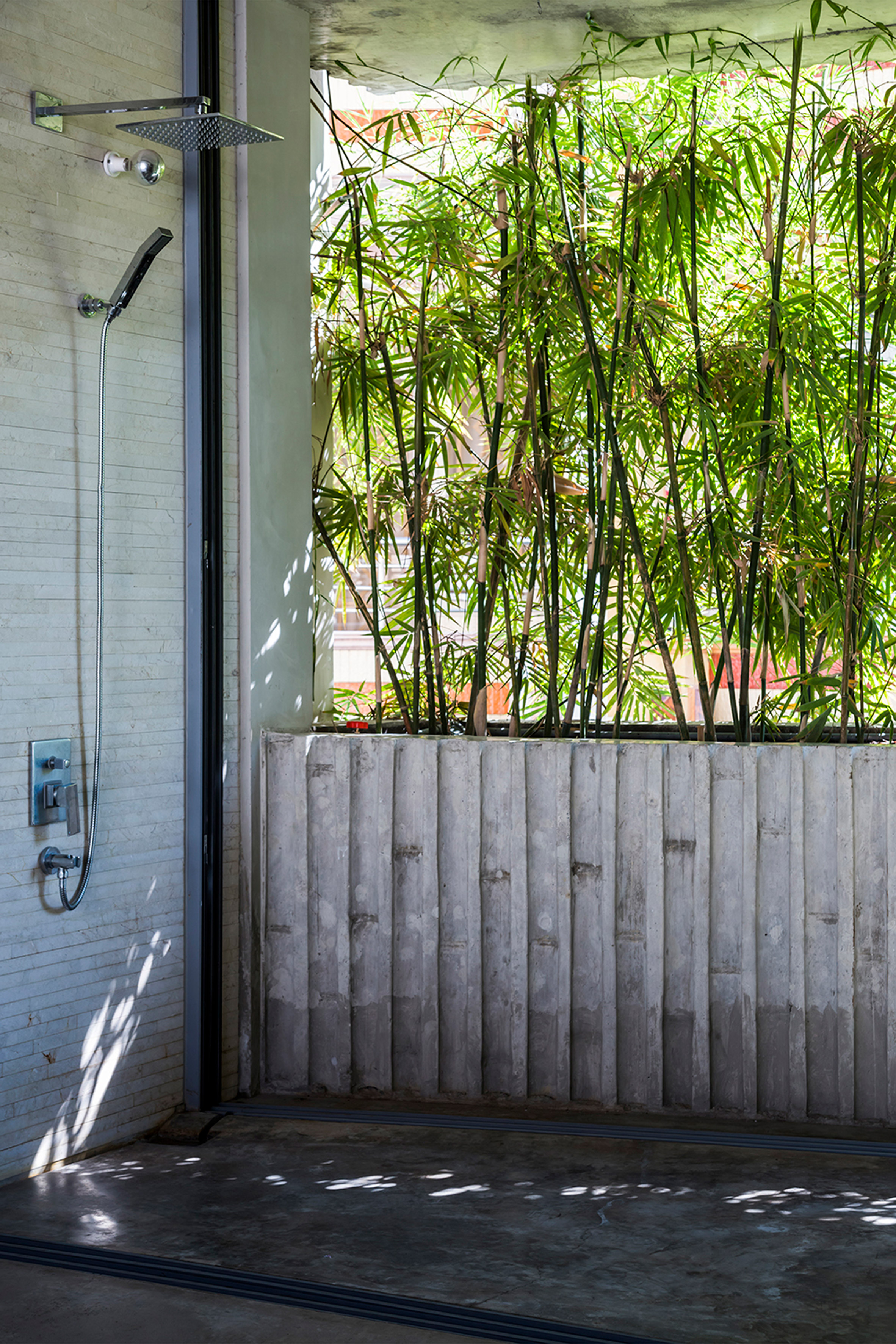 The fifth floor, which hosts a home office, steps back to make room for an outdoor swimming pool, and a garden is placed on the roof.

A pared-back aesthetic features throughout the residence, which is finished with concrete flooring and dark wooden furnishings. 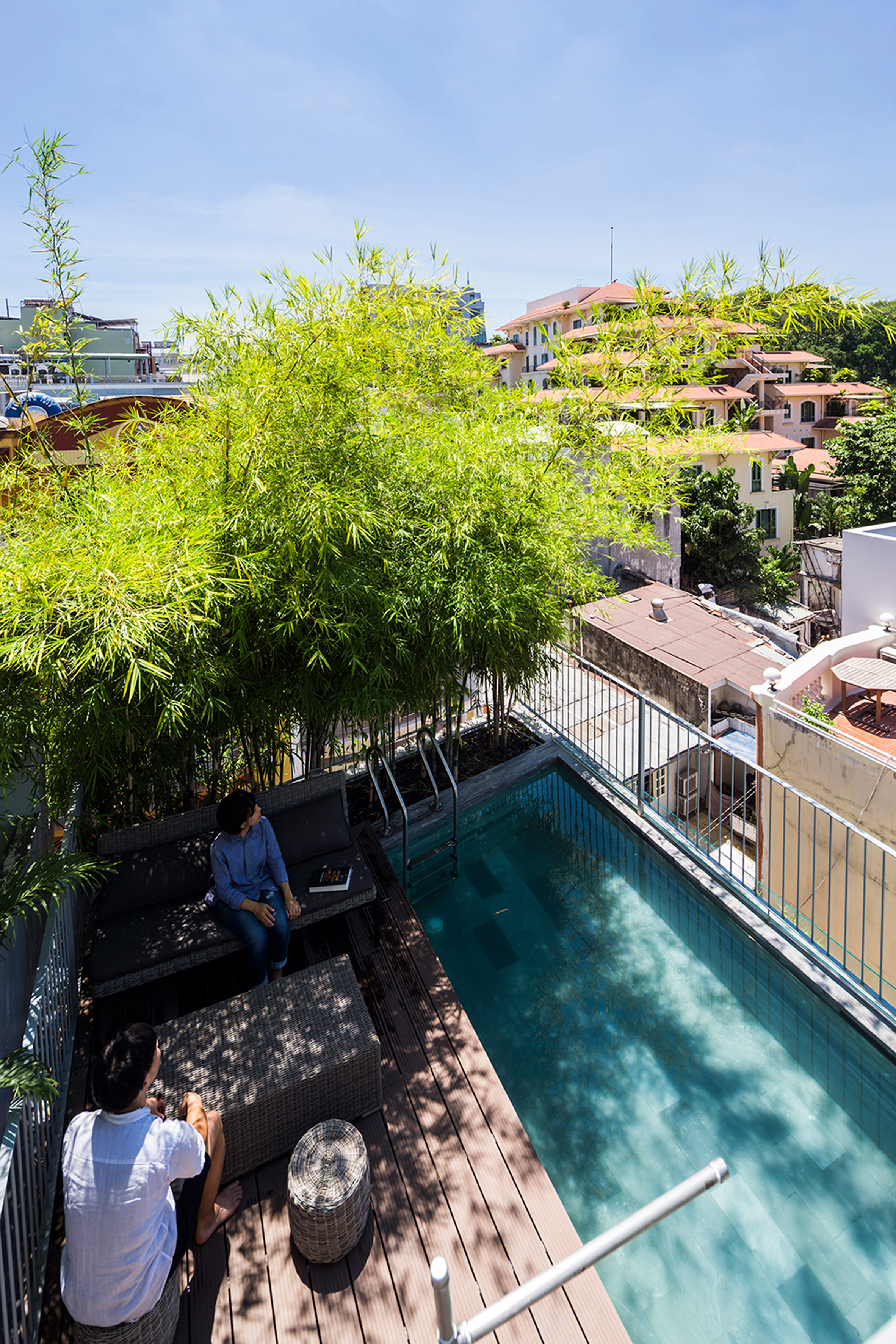 Vietnamese architect Vo Trong Nghia, who ranked 28th in Dezeen’s last Hot List, has become well-known for his use of vegetation. As well as residences, his other plant-covered designs include the Babylon hotel at the Naman Retreat and the Farming Kindergarten, which features a vegetable patch on its looping roof. 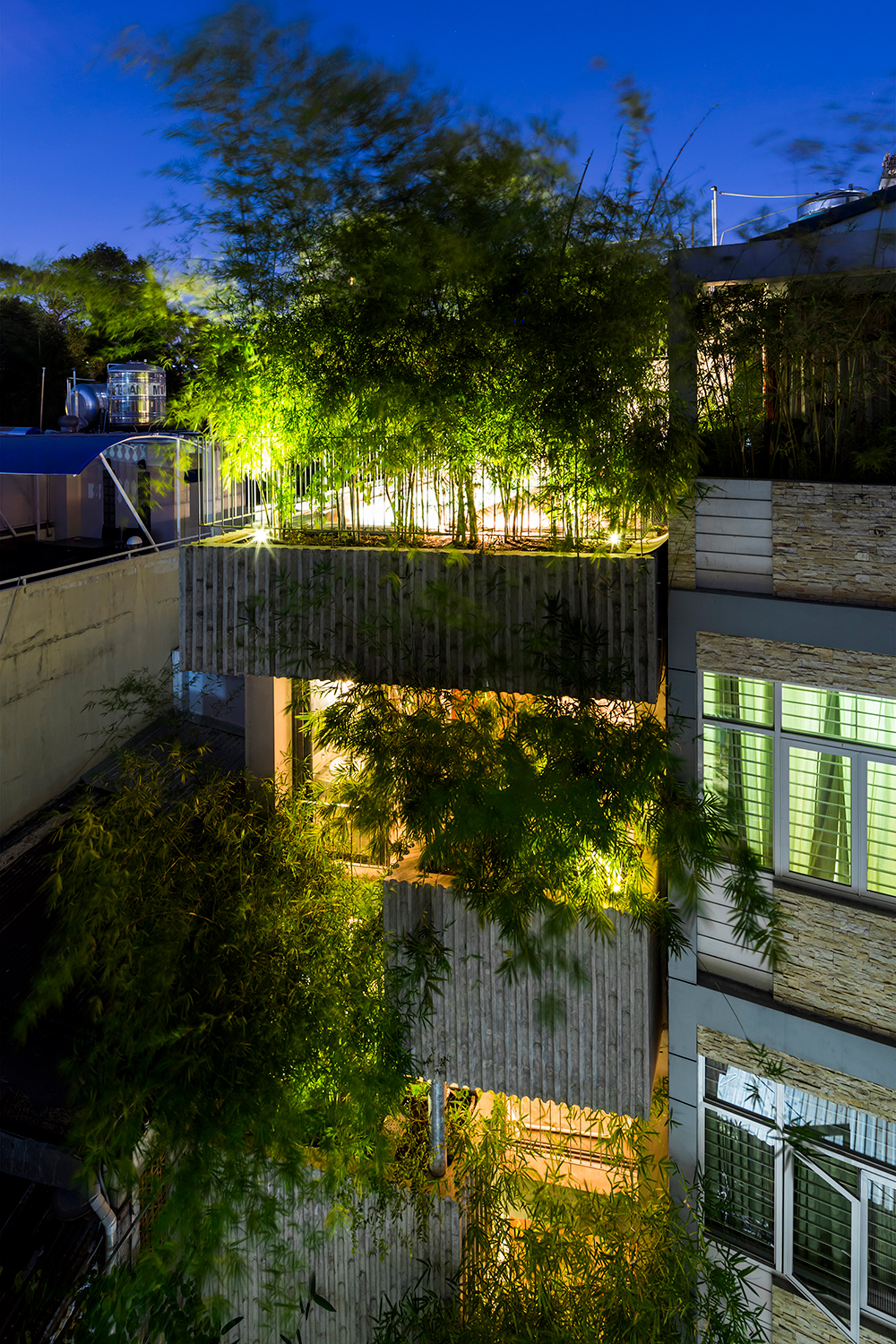 The House for Trees series is one of a number of projects using greenery to combat problems in dense cities. Italian architect Stefano Boeri is a key advocate, and has used his concept of vertical forests to create green space in a host of cities. Others include Kengo Kuma, Jean Nouvel and Herzog & de Meuron.

Photography is by Hiroyuki Oki.