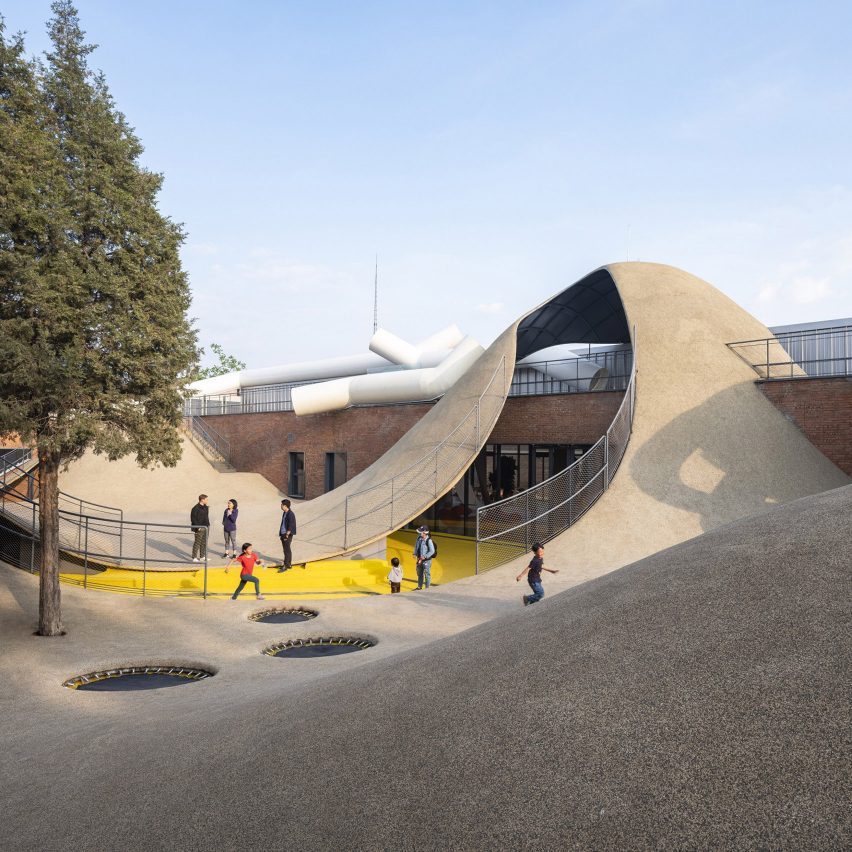 A playful network of large pipes containing walkways and bridges wraps around this children’s community centre in Beijing by local practice We Architech Anonymous (WAA), housed in a series of refurbished 1970s industrial buildings.

The Playscape, which has been shortlisted in the landscape project category of Dezeen Awards 2021, was designed for a children’s healthcare provider that specialises in exploration and play, and created as a “tool for sensory learning”.

A cluster of former grain warehouses form the basis for the project, with the courtyard in their centre transformed into an undulating, steel-framed landscape that creates a series of new interactions among the existing buildings.

“Beijing is a city where many children do not have access to an adequate-sized outdoor space within their close locale,” said the WAA. “Children are often drawn to risk, creating a feedback loop of design refinement and safety concerns…we allowed a managed element of risk, where children can learn to be more confident to tackle problems independently.”

Cut-outs revealing bright yellow play-spaces, built-in trampolines and a series of mounds that can be scaled to access the roofs of the original warehouses animate this central landscape, which also acts to stitch together the previously disconnected buildings on the site.

Inside these former warehouses are a series of play spaces for a range of ages. These include crawlspaces and climbing areas with hanging fabrics, a suspended tensile net area and classrooms for more directed learning, as well as a library and restaurant. 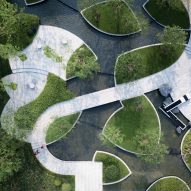 Externally, new openings and textured perforated brickwork subtly updates the warehouses, with minimal interior changes made in order to highlight the contrast between the industrial structures and the newly inserted playscape.

“The new additions for play are visually distinct from the industrial vernacular…this had a greater functional outcome and also generated more interest for children,” said the practice.

The surrounding pipework incorporates viewing areas and half-covered sections as it moves around the structure, culminating in access to a roof terrace atop one of the warehouse buildings, where skylights give views into the play areas below.

“A full loop can be made and children can travel from the terrace under the mound through slides which vary in height from seven metres to 4.3 metres,” described the practice. “The network impresses upon them alternative directions to goals, and that sometimes the second-shortest route is more fun.”

These pipes also work to connect the warehouse buildings back into the surrounding area, providing access and views out over an adjacent public park.

The project was shortlisted in the 2021 Dezeen Award’s landscape project category, along with Qidi Design Group’s landscaped garden in Danyang, among others.

Previous projects for children in Beijing include a kindergarten by MAD, which transformed an 18th-century structure with a bright red rooftop walkway and playscape.

The post WAA transforms Beijing warehouses into a playscape for sensory learning appeared first on Dezeen.