Wilkinson Eyre has completed its transformation of a trio of Victorian gasholder frames at London’s King’s Cross into luxury apartments with interiors by Jonathan Tuckey Design. 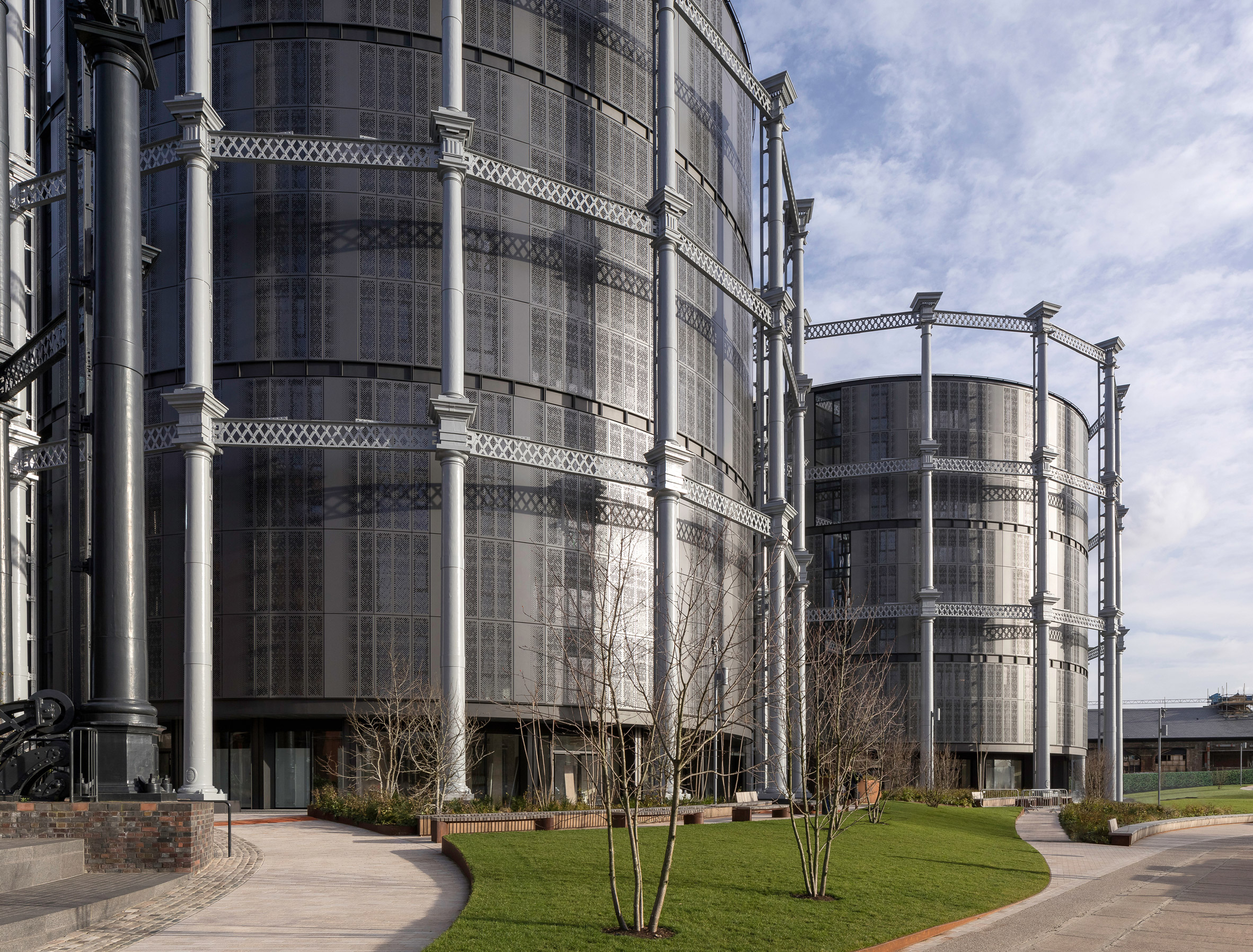 The London architecture practice headed up by Chris Wilkinson and Jim Eyre won a competition in 2002 to construct the apartments within the three conjoined gasholders for developer Argent.

The project forms part of the Allies and Morrison-designed masterplan for a 27-hectare site around King’s Cross station in north London, which also includes a millennial-pink office block by Duggan Morris Architects and a Thomas Heatherwick-designed shopping centre. 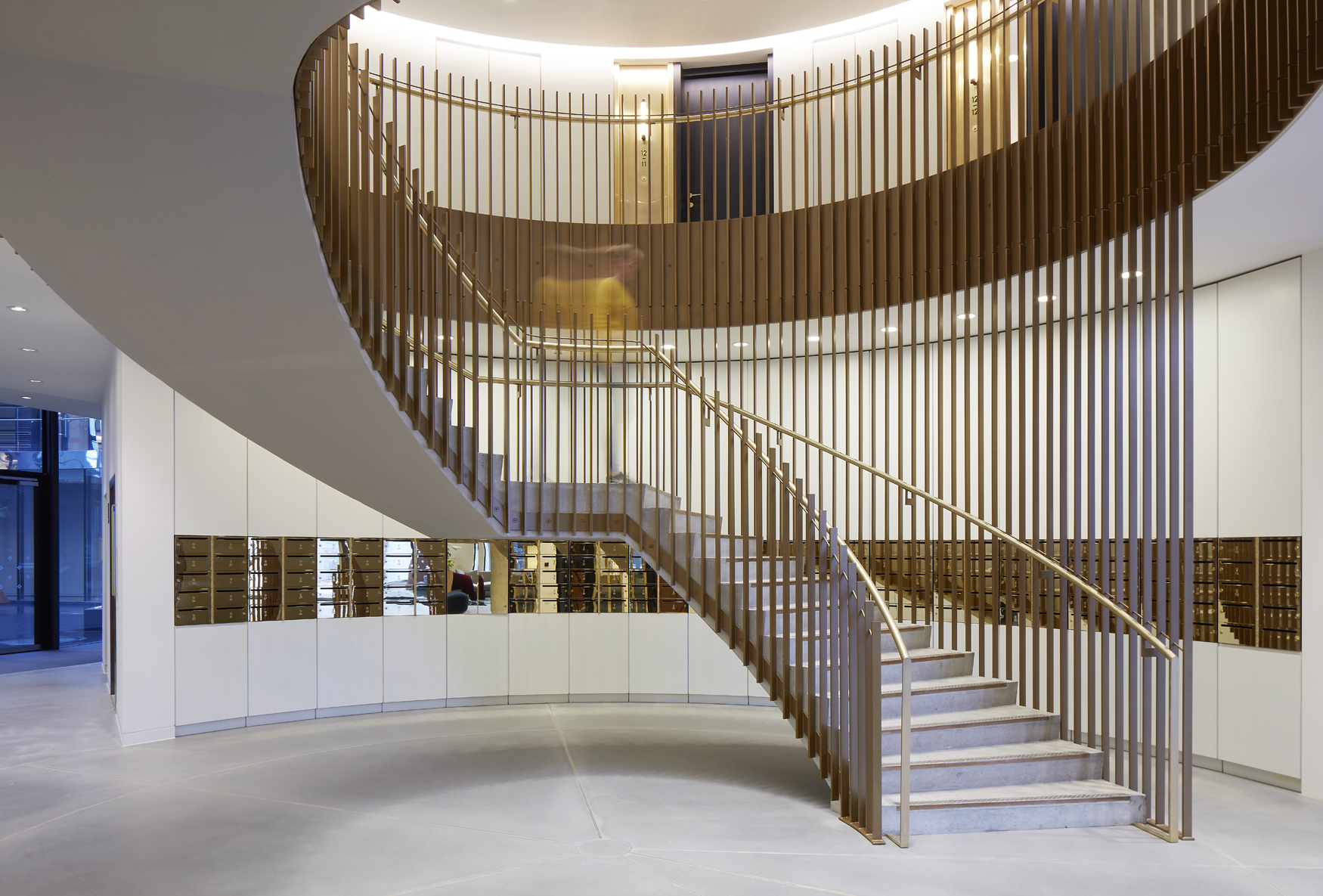 Three housing blocks follow the cylindrical form of the original wrought-iron frames, which date from the 1860s, but have been dismantled, repaired and re-erected on the site.

“The Gasholders create a dynamic counterpoint between old and new,” said Wilkinson, who has chosen to buy a home in the project with his wife. 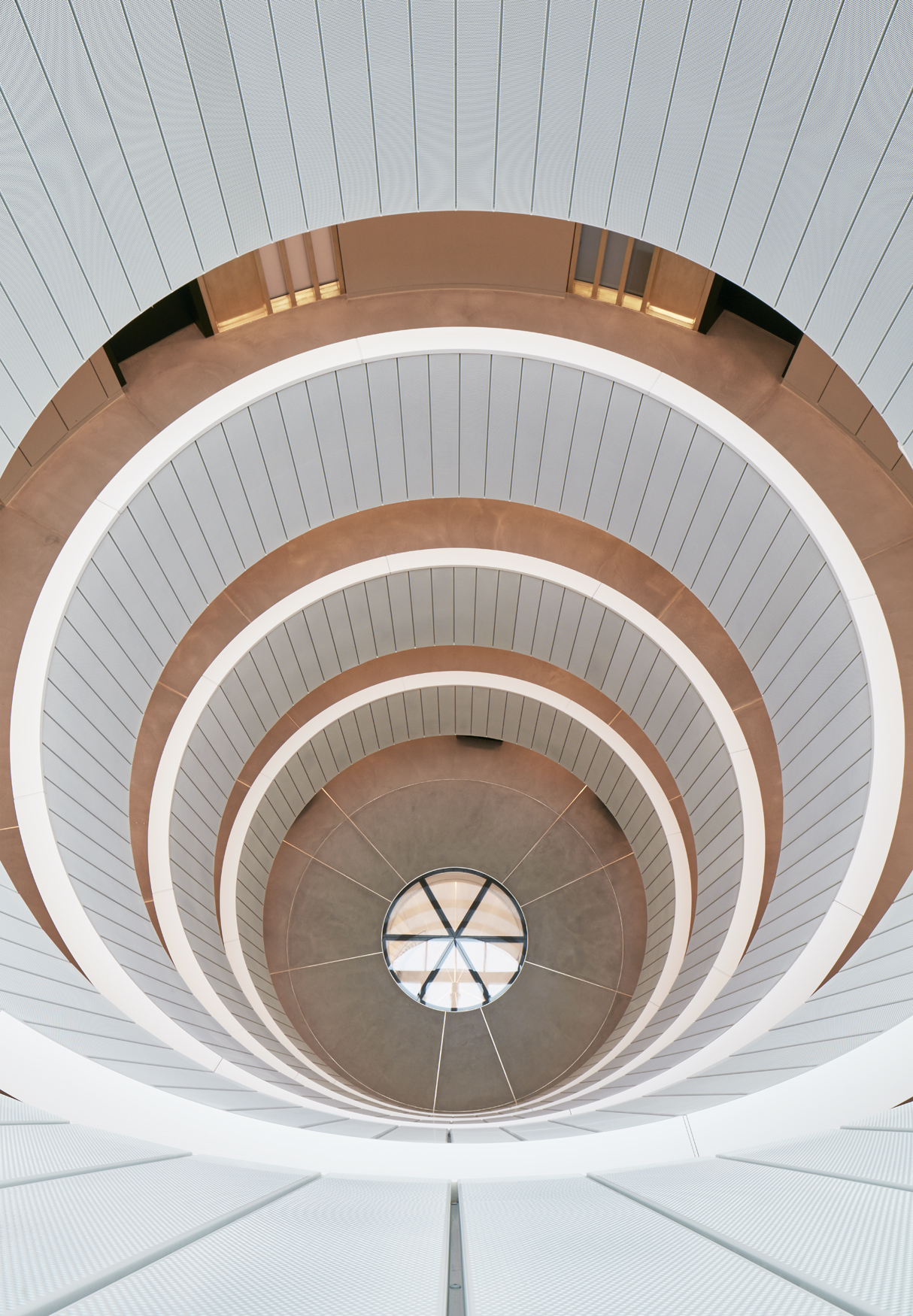 “It represents the very essence of city life and offers unique canalside views,” he said. “We love the idea of jumping on a train to Paris for the weekend, and that we are so well connected to the rest of London and the whole of the country.”

Perforated grey metal shutters designed by Wilkinson can be pulled across to screen the floor-to-ceiling glazing of the facades, which are set within the matching grey framework of the gasholders. 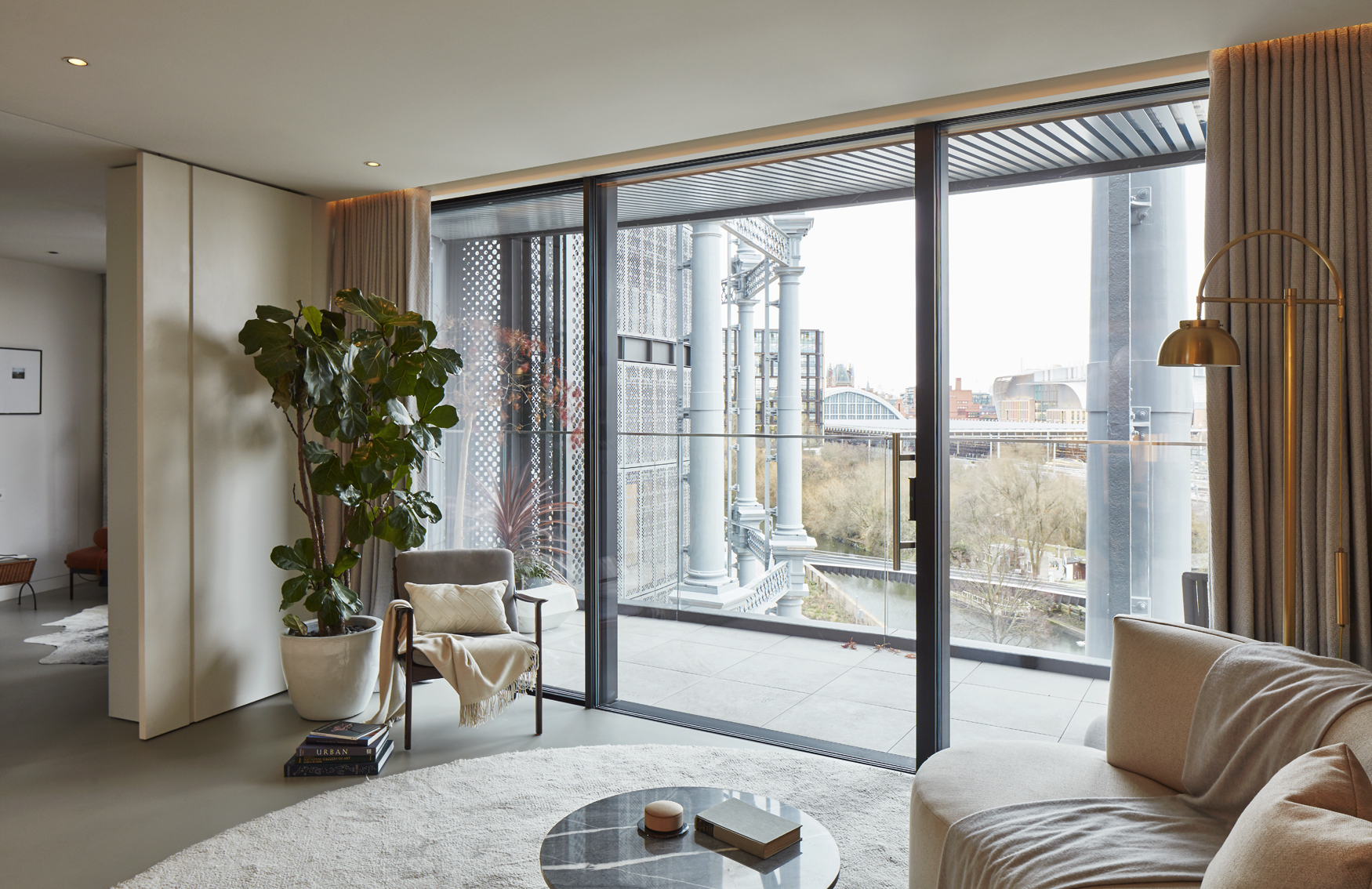 Where the now Grade II-listed structures intersect, there is a circular patio and pool of water. This cylindrical atrium, open to the sky, is surrounded by walkways that echo the internal layouts that sees corridors wrap around enclosed skylit atriums.

Jonathan Tuckey and his team were responsible for the interior design of the 145 apartments, which range in price from £810,000 for a studio to £2 million for a three-bedroom home. 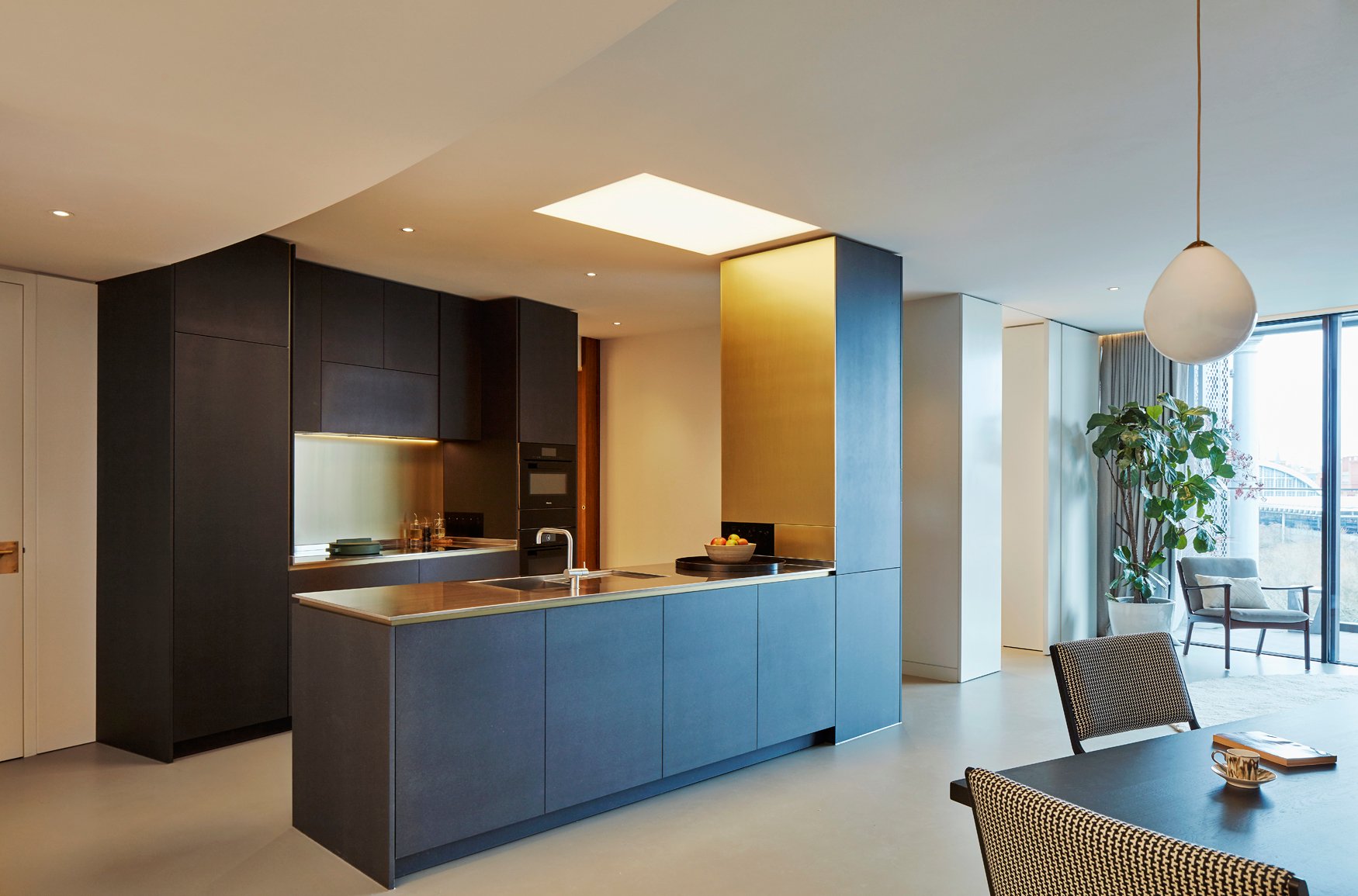 There are also nine penthouses each with a private roof garden. These gardens and a communal roof garden that has views over Regent’s Canal, the Midland Hotel and down to the Shard were designed by landscaper Dan Pearson.

Alongside the complex is the Gasholder Park, a circular patch of greenery complete with a polished steel pavilion by Bell Phillips, set within the confines of a single gasholder frame. 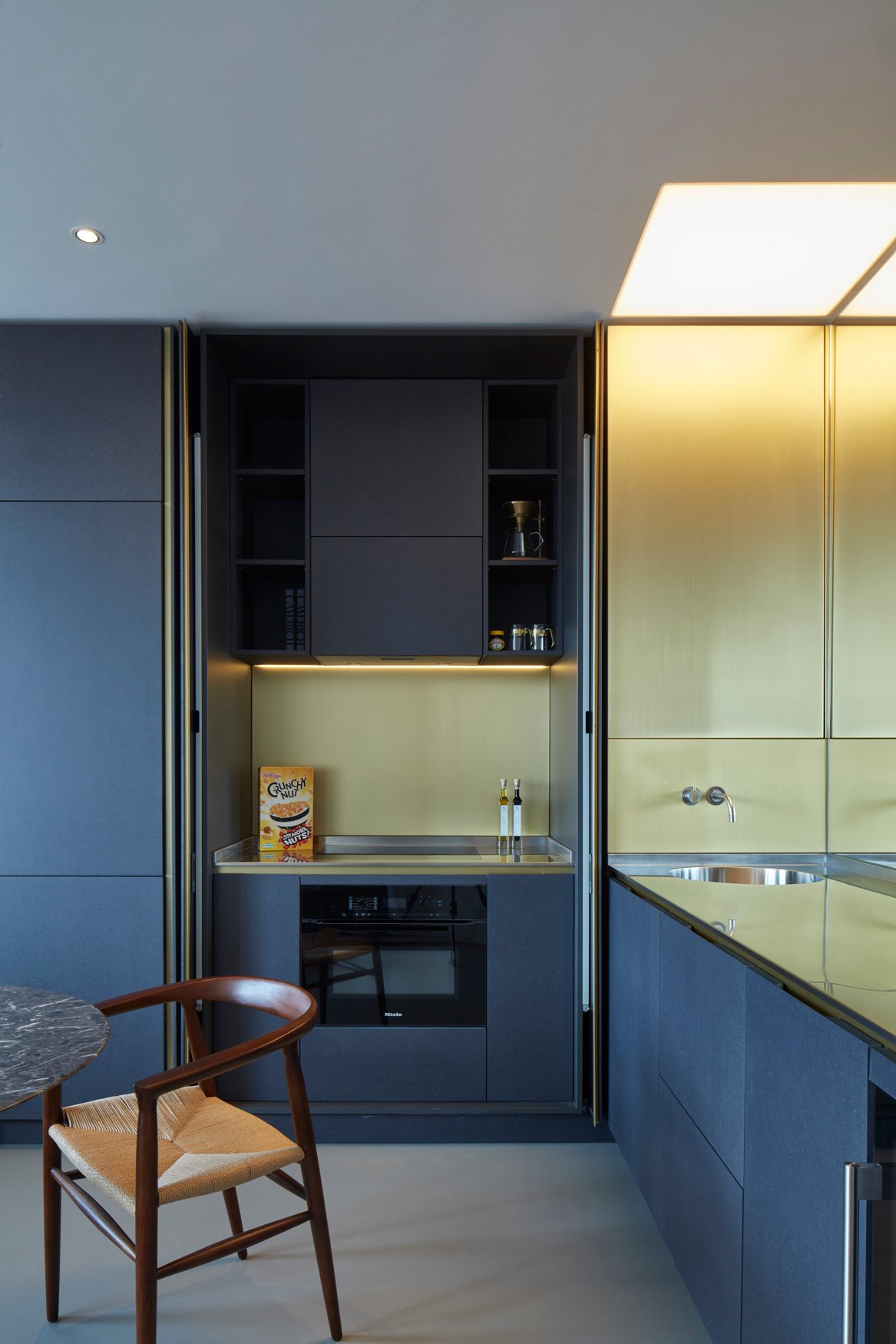 A material palette of engineered board, brushed stainless steel and brass is applied throughout the combined living spaces, where angular walls of cabinetry radiate out from the centre of the plan.

“A very specific wedge-shape form is created as the plans expand outwards from the dramatic atria at the centre of the Gasholders to the curved external facades,” explained Jonathan Tuckey. 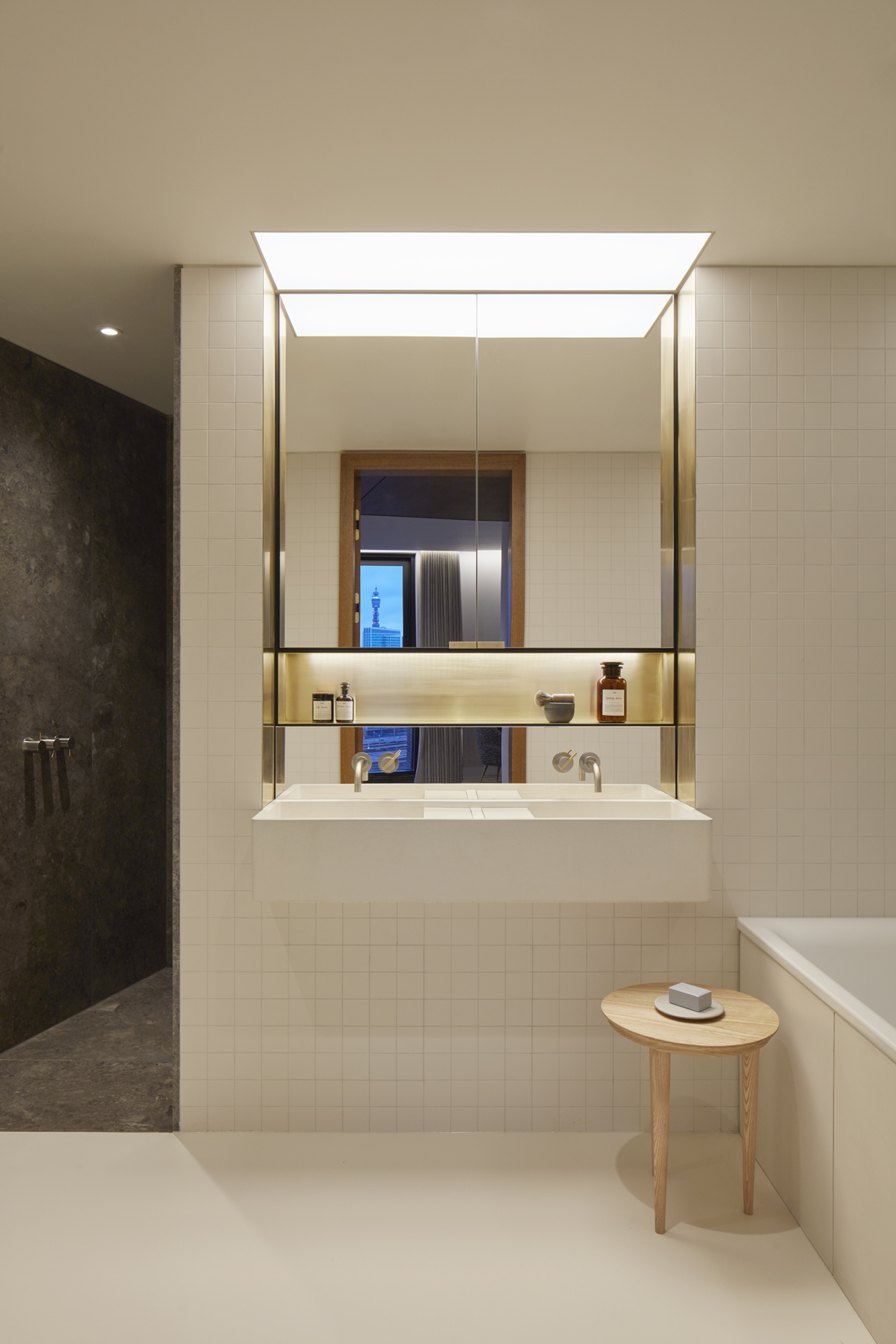 “These dramatic spaces have been opened up where possible to create living areas that are connected to both the core of the building and the aspect that looks out over King’s Cross,” he added.

As gasholders are gradually being taken out of use, numerous proposals for their adaption have been put forward.

Swiss firm Herzog & de Meuron is also working on a project to convert a disused gasworks in Stockholm into housing. 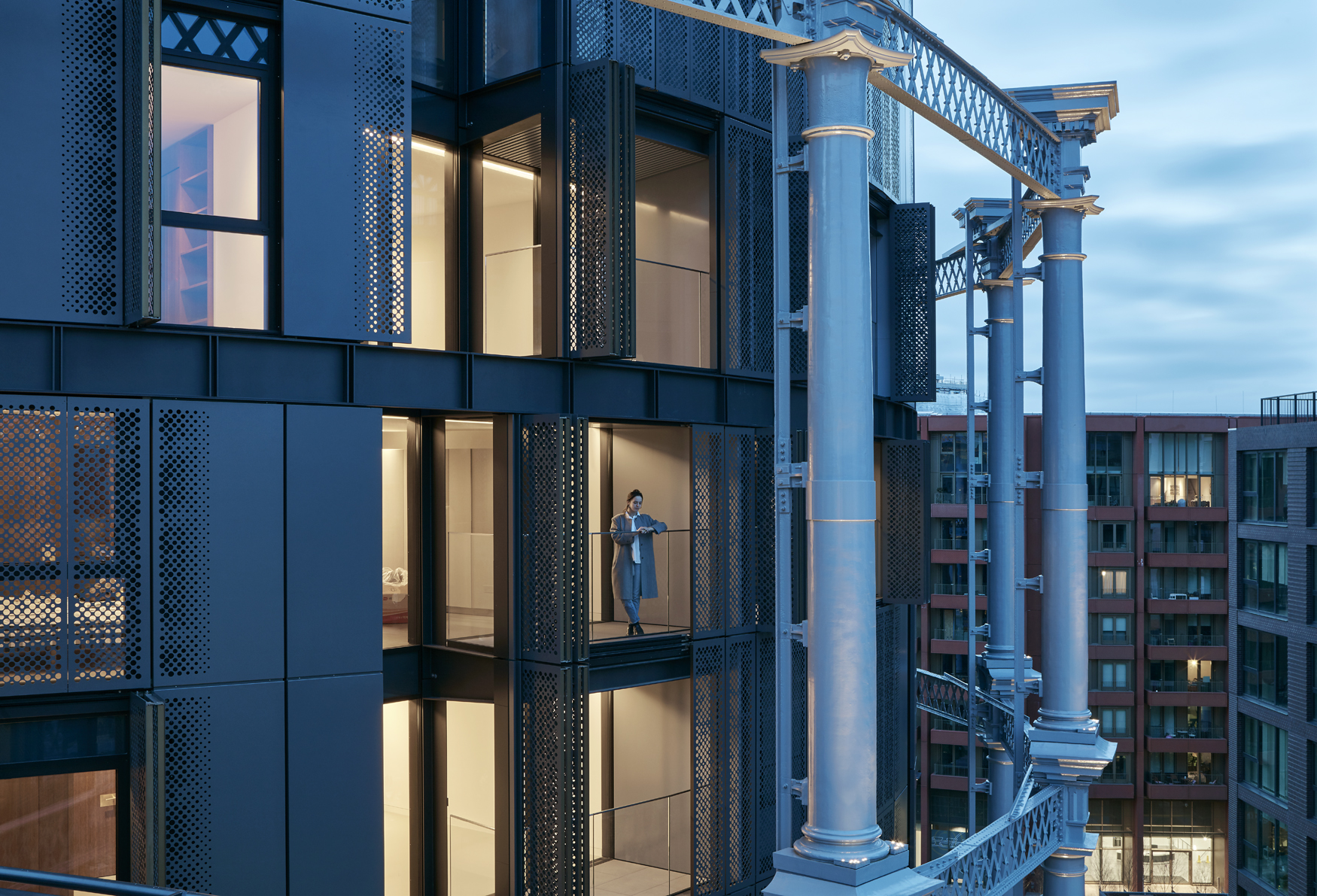 Last year the Royal Institute of British Architects ran an ideas competition to find new uses for the structures in collaboration with British Gas and electricity network National Grid.

Plans put forward included a multi-storey charging station for electric vehicles and sports fields, but the winning design was for affordable housing and workspace.

Interior photography is by James Brittain.