Coastal House was shortlisted for the RIBA House of the Year award in 2018, after 6a Architects completely transformed its interior. 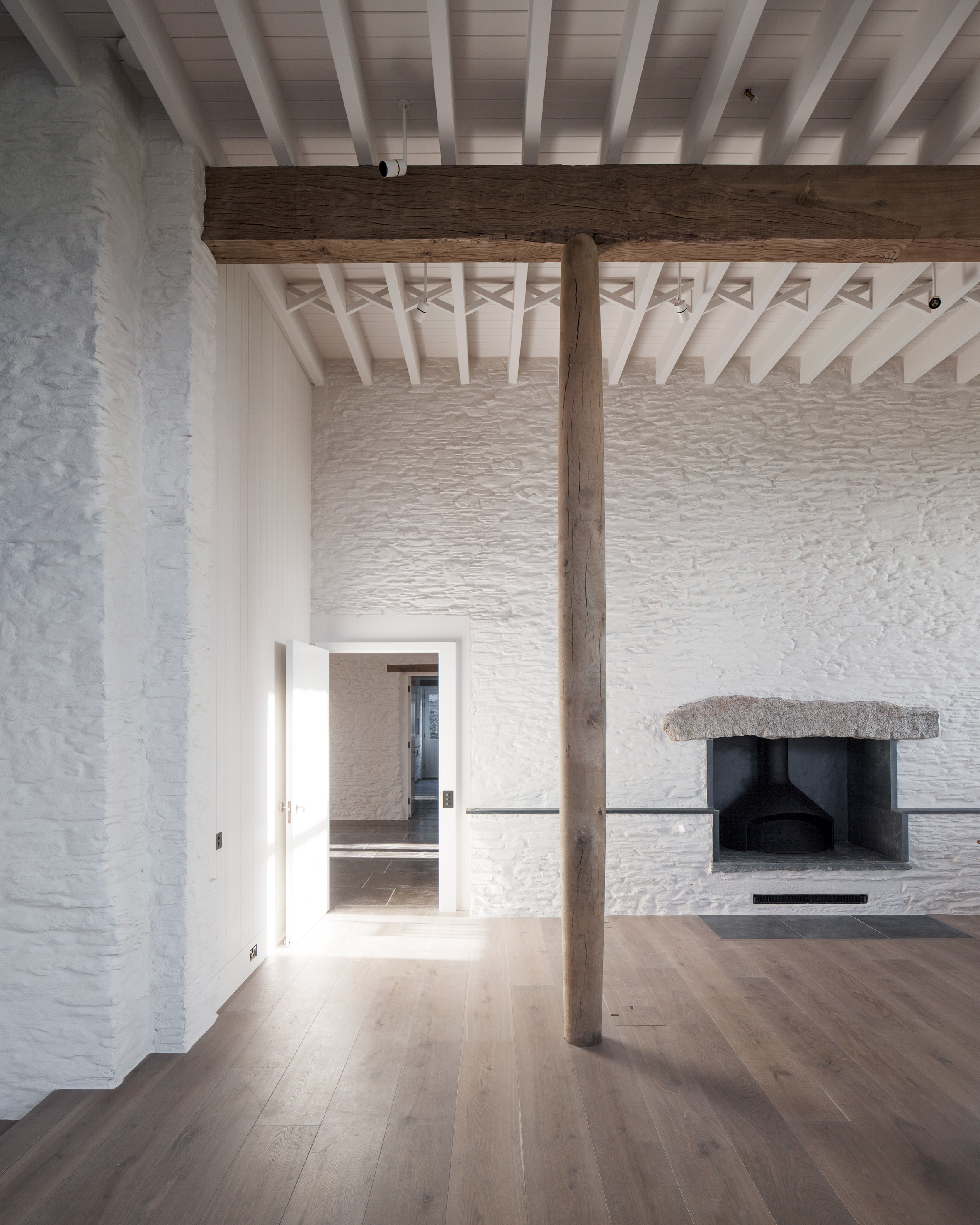 However externally the building was kept very traditional, in an effort to retain its original form and character. The walls were reclad the house in Cornish slate, and the only hint of change is provided by a new oak veranda. “Maintaining the character of the relatively modest exterior was an important part of the brief, whilst inside, a complete reconfiguration of the internal volumes,” explained the design team. The house originally had four chimney cores, but 6a Architects removed one of them. It was this that made it possible to open up the plan.

Another change made by in the renovation was the lowering of the ground floor, which was originally raised on a plinth in the basement.

Replaced with a concrete slab lined with underfloor heating, it now sits in line with the surrounding landscape. This created rooms with more generous height, as well as larger windows, meaning more light penetrates the interior. 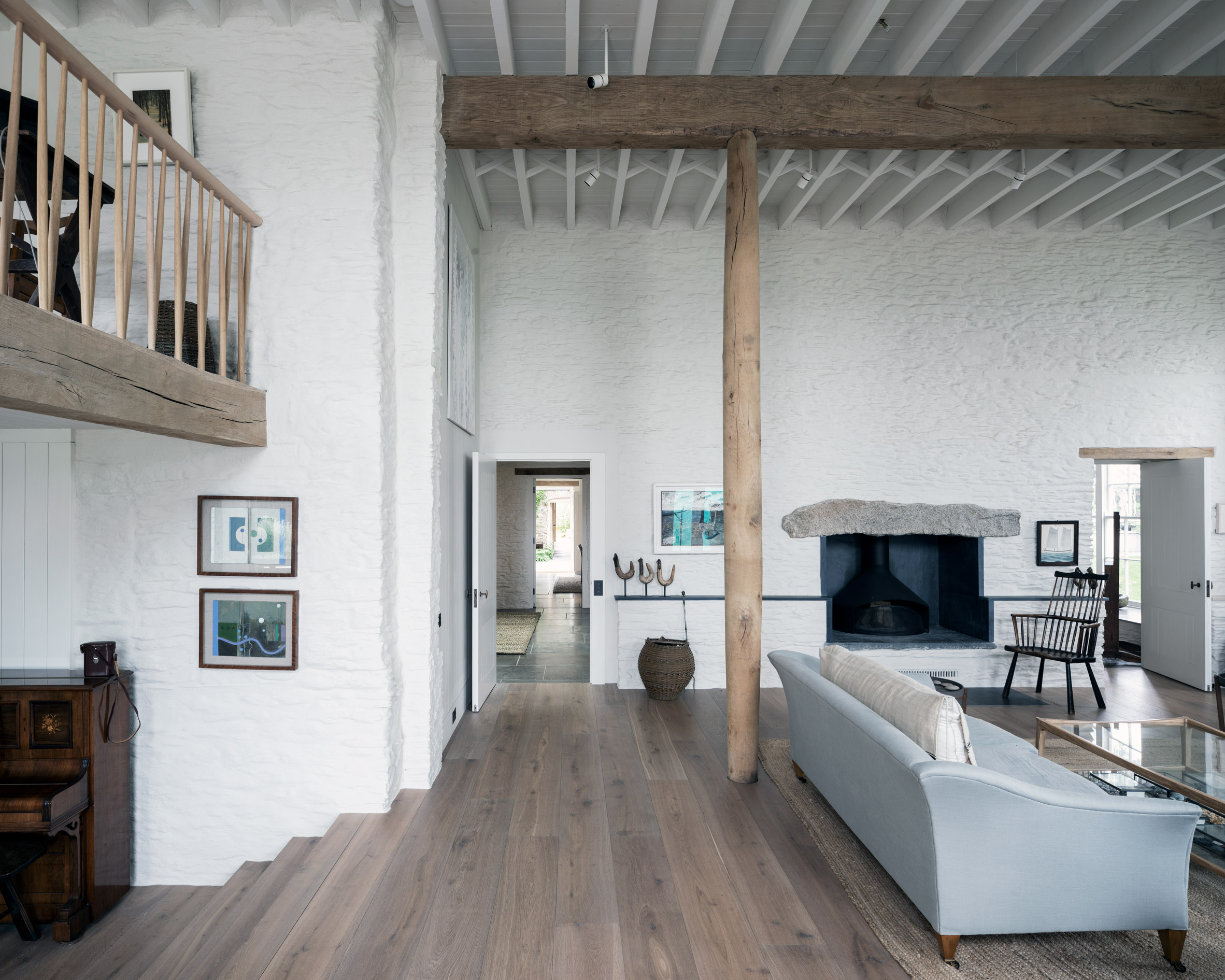 At the heart of the new interior, there is now a grand, triple-height hallway with a wooden staircase, lit by a skylight and surrounded by balconies.

This is framed by characterful, spindle-shaped balusters, which are made of oak and splayed at two different angles for rigidity. 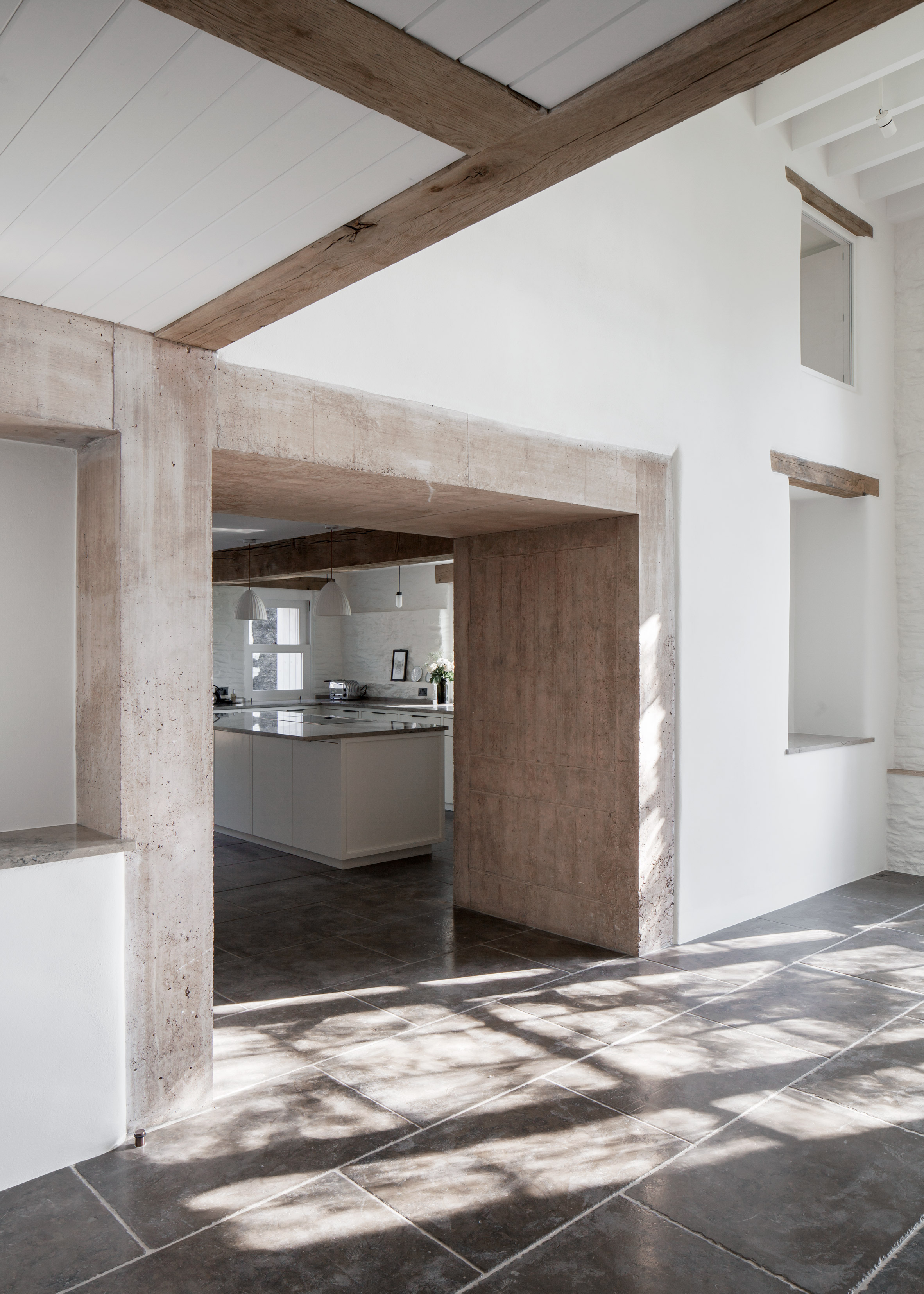 Board-marked concrete lines many of the openings, to echo the timber details throughout the house. The original details of Coastal House are not forgotten, as the existing masonry reveals clues of its previous form. Alongside the former fireplaces that sit as wall recesses, old joist supports now function as low-level shelves. 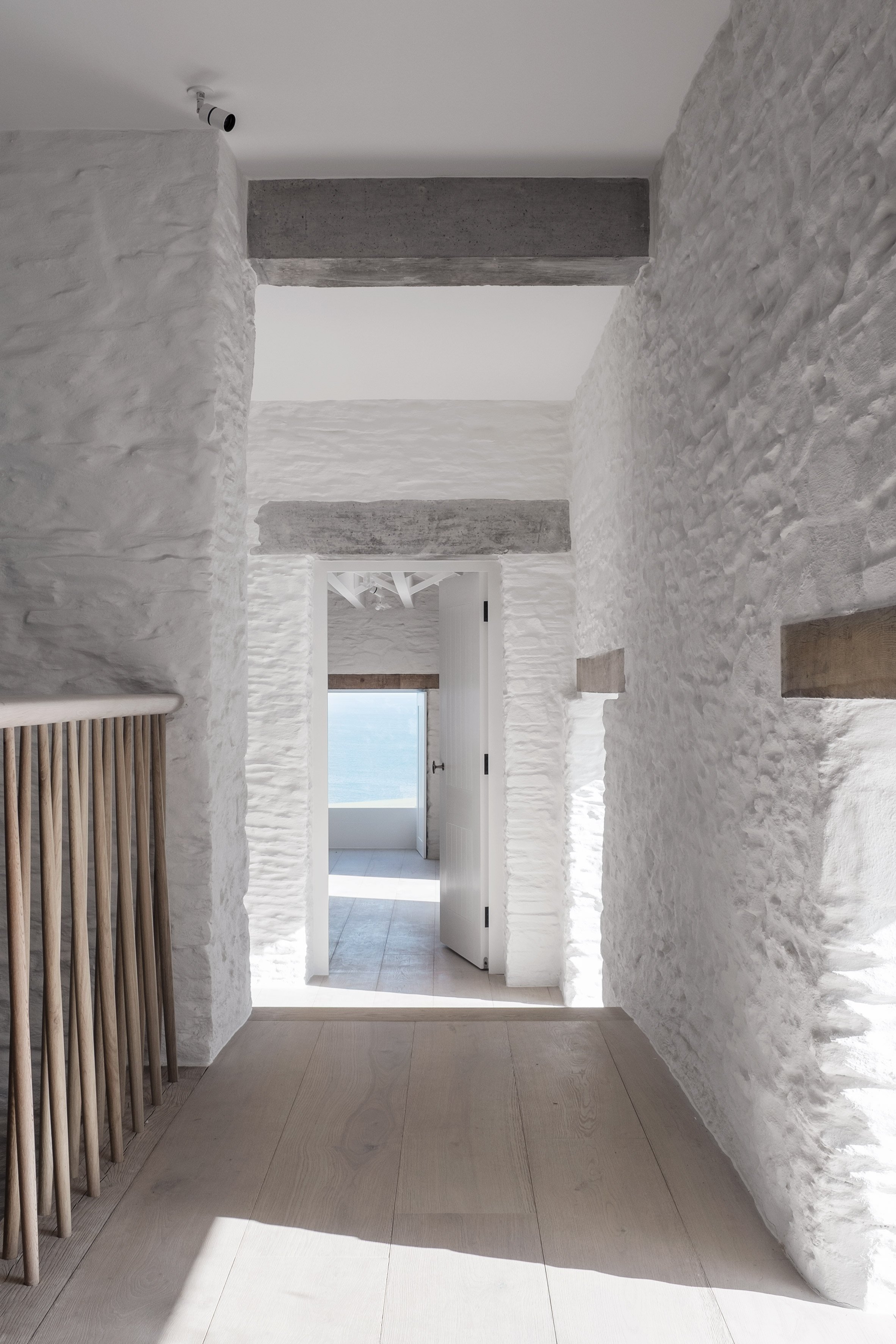 The architects have also made the building more sustainable. It is newly wrapped with 200 millimetres of wood fibre insulation and reclaimed slate cladding, while solar thermal panels on the roof contribute to the building’s heating system. 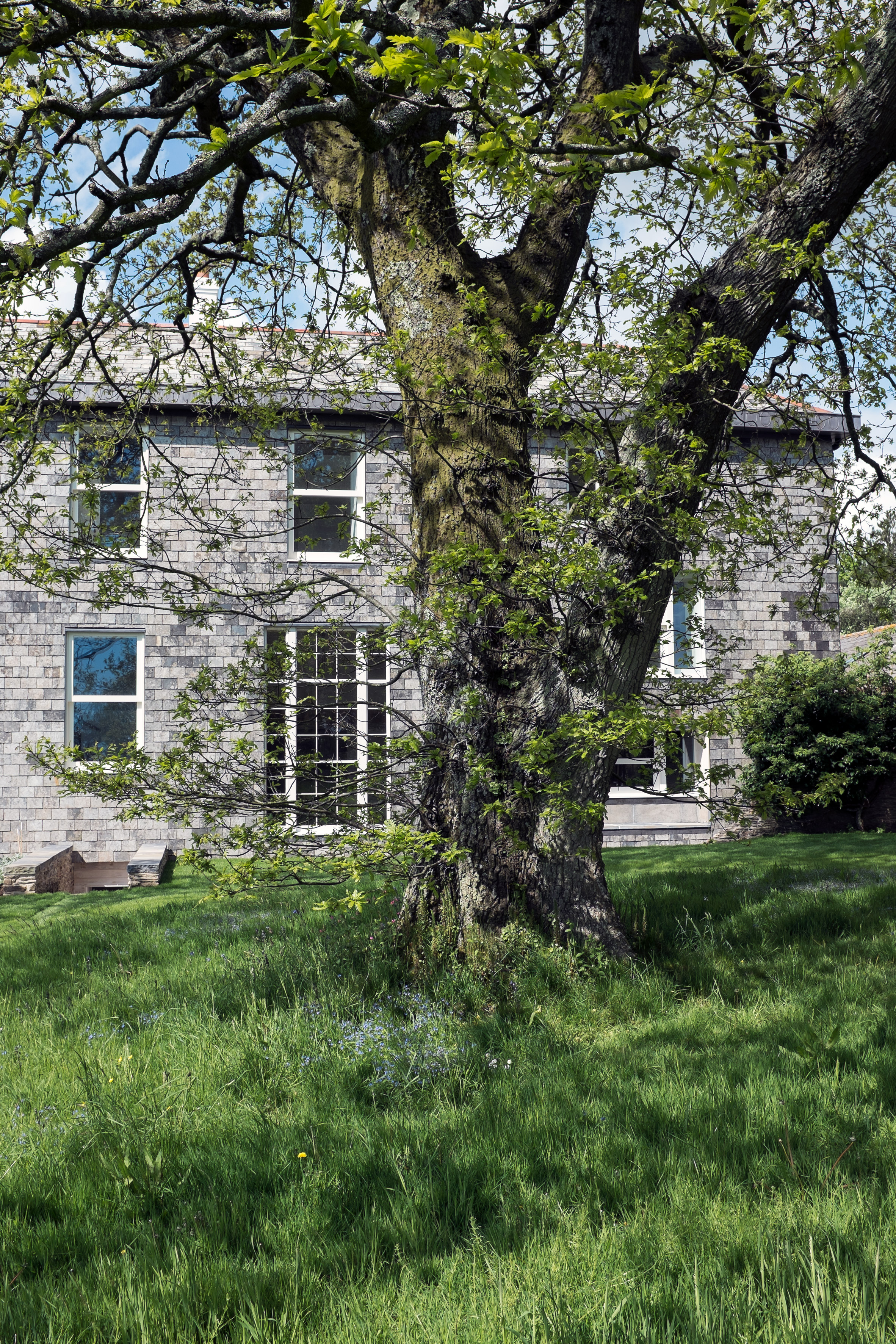 6a Architects was founded by Tom Emerson and Stephanie Macdonald in 2001.

Other recently completed projects by the studio include a geometric silver extension to a gallery in Milton Keynes, timber-clad student halls at the University of Cambridge’s Churchill College and a concrete photography studio for Juergen Teller.

Photography is by Johan Dehlin.