Triangular windows are set beneath the pitched roofs of this house in England’s South Downs National Park, which London studio Alma-nac designed to sit discreetly in its wooded setting. 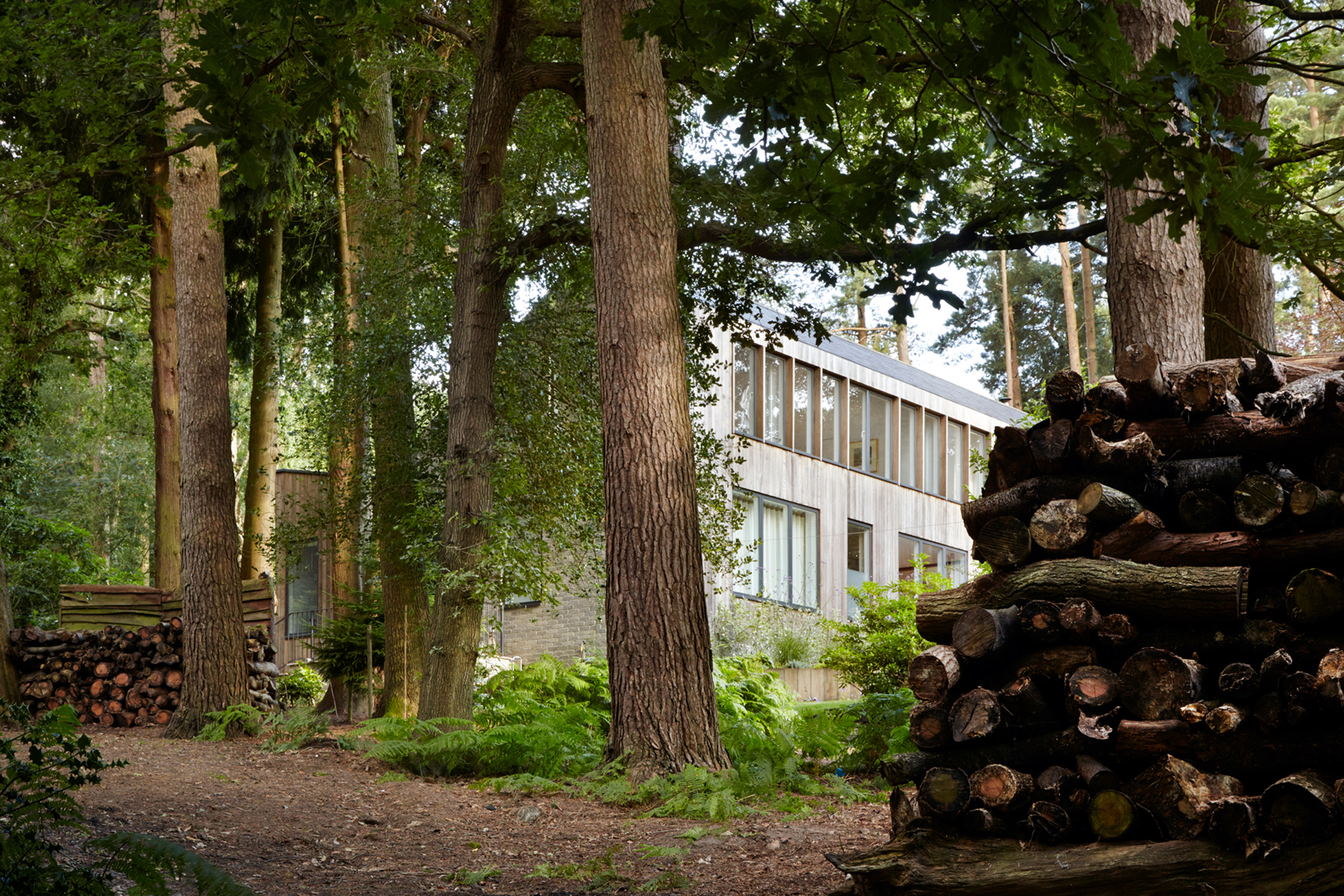 Alma-nac was asked to design the house for a plot within an area of outstanding natural beauty in the county of Hampshire, where it replaces a bungalow that had been in the family for over 60 years.

The new 240-square-metre home named House in the Woods was required to retain some of the previous building’s character and was constructed over roughly the same footprint. 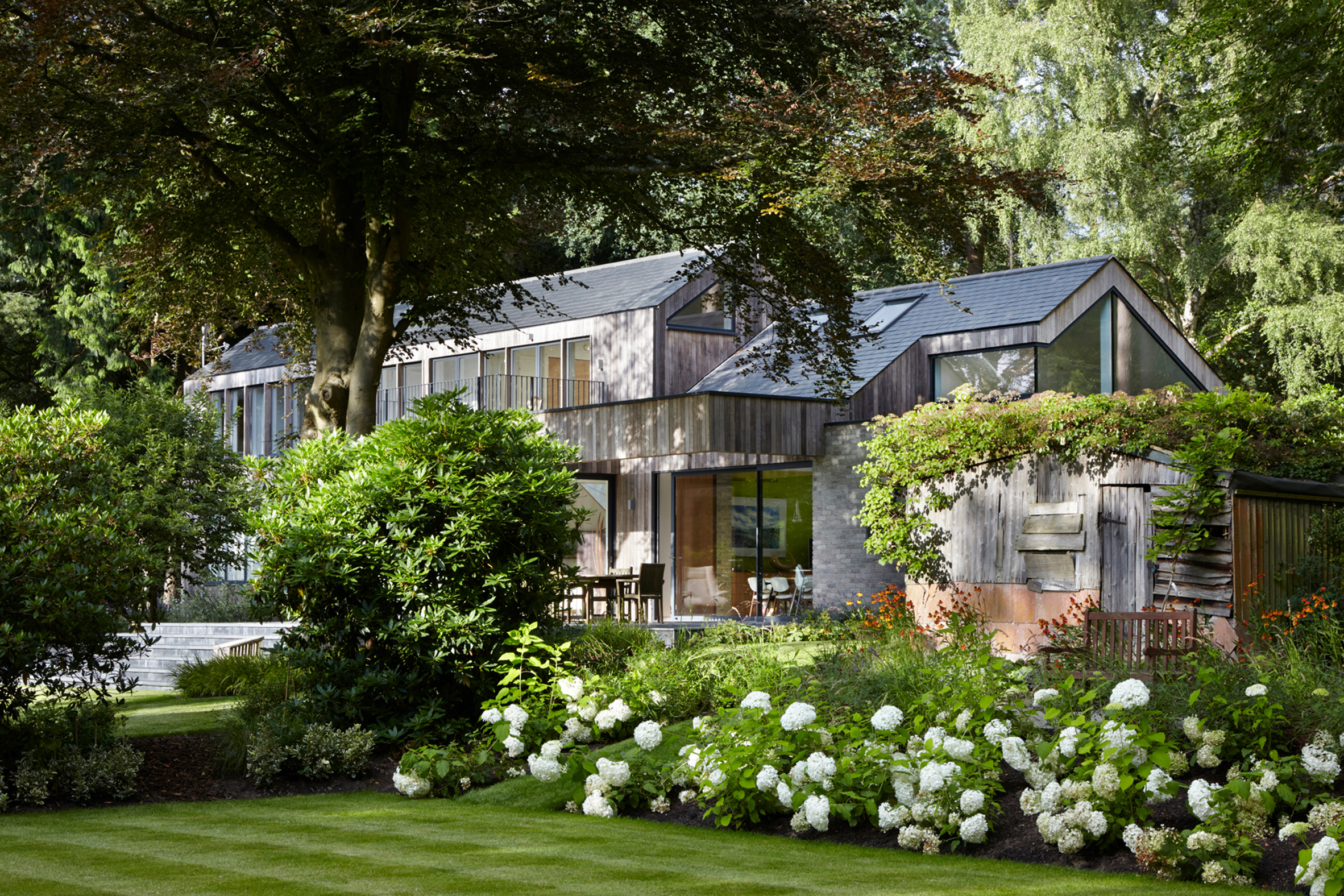 The house also features a flexible internal configuration that enables it to switch from its everyday use as a one-bedroom home to accommodate up to ten people in five bedrooms.

This was achieved by incorporating concealed full-height sliding partitions that can be used to form additional bedrooms when required.

Bedrooms on the ground floor can be sealed off to reduce the perceived size of the interior, while a spare room upstairs doubles as a painting studio. 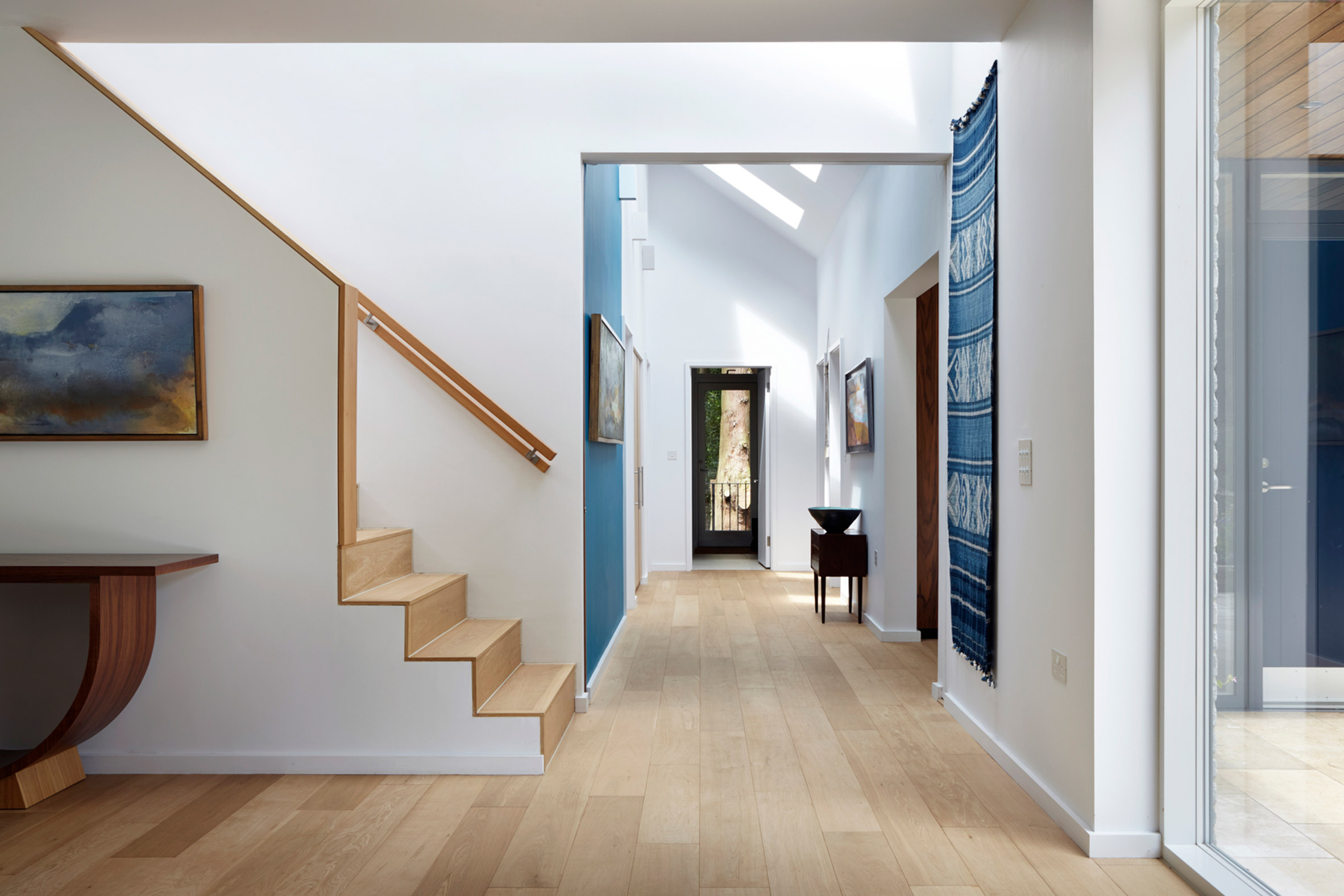 The other main criteria for the design was to improve the connection between the house and its expansive gardens, with decking and roof terraces offering views and opportunities for outdoor living. 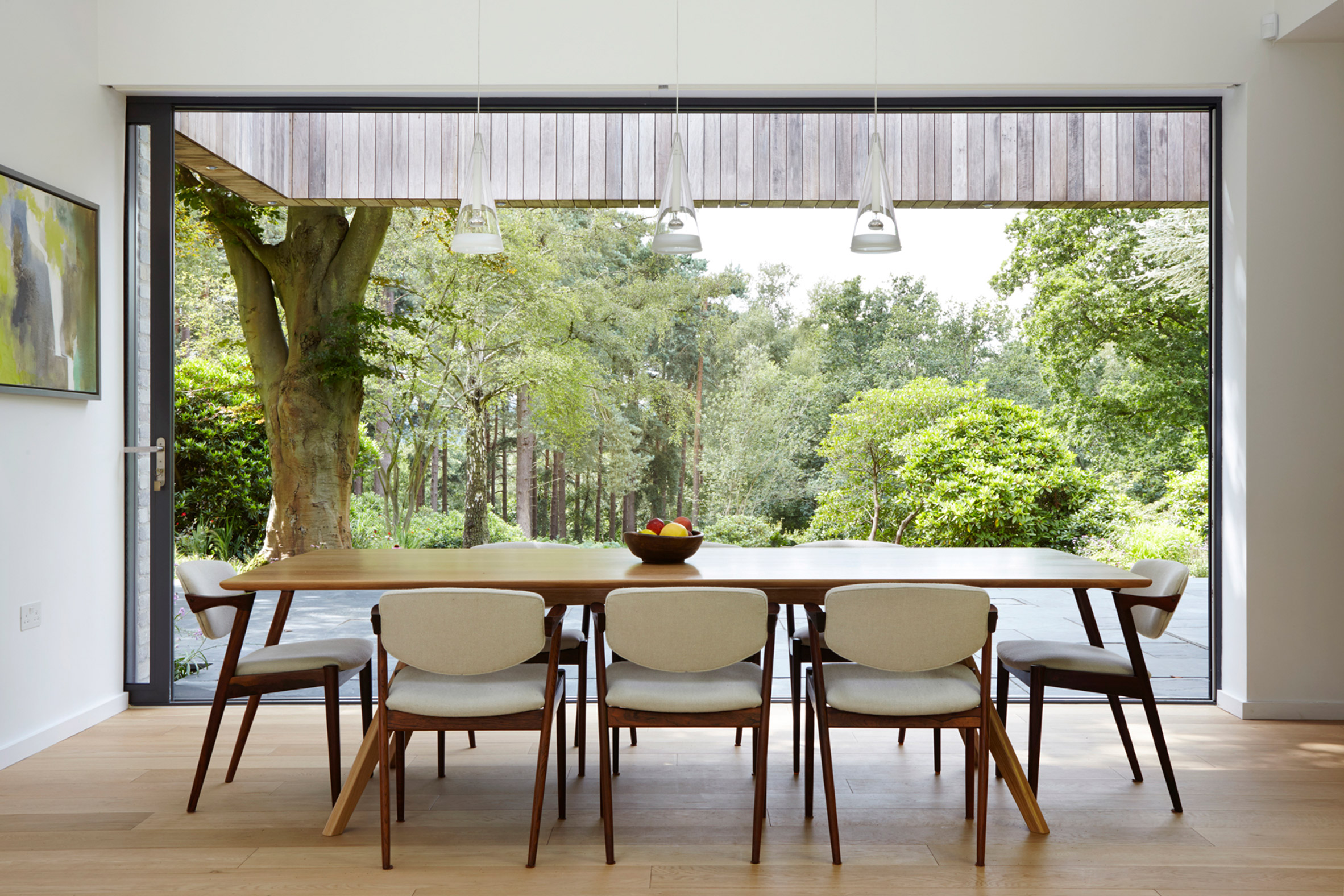 “Together with our client, we wanted to make the most of the views out to the landscaped garden and the South Downs beyond and a connection with the outdoors was essential,” said Alma-nac.

“This is largely achieved through extensive glazed openings, as well as the direct access to the gardens from the living and dining spaces.” 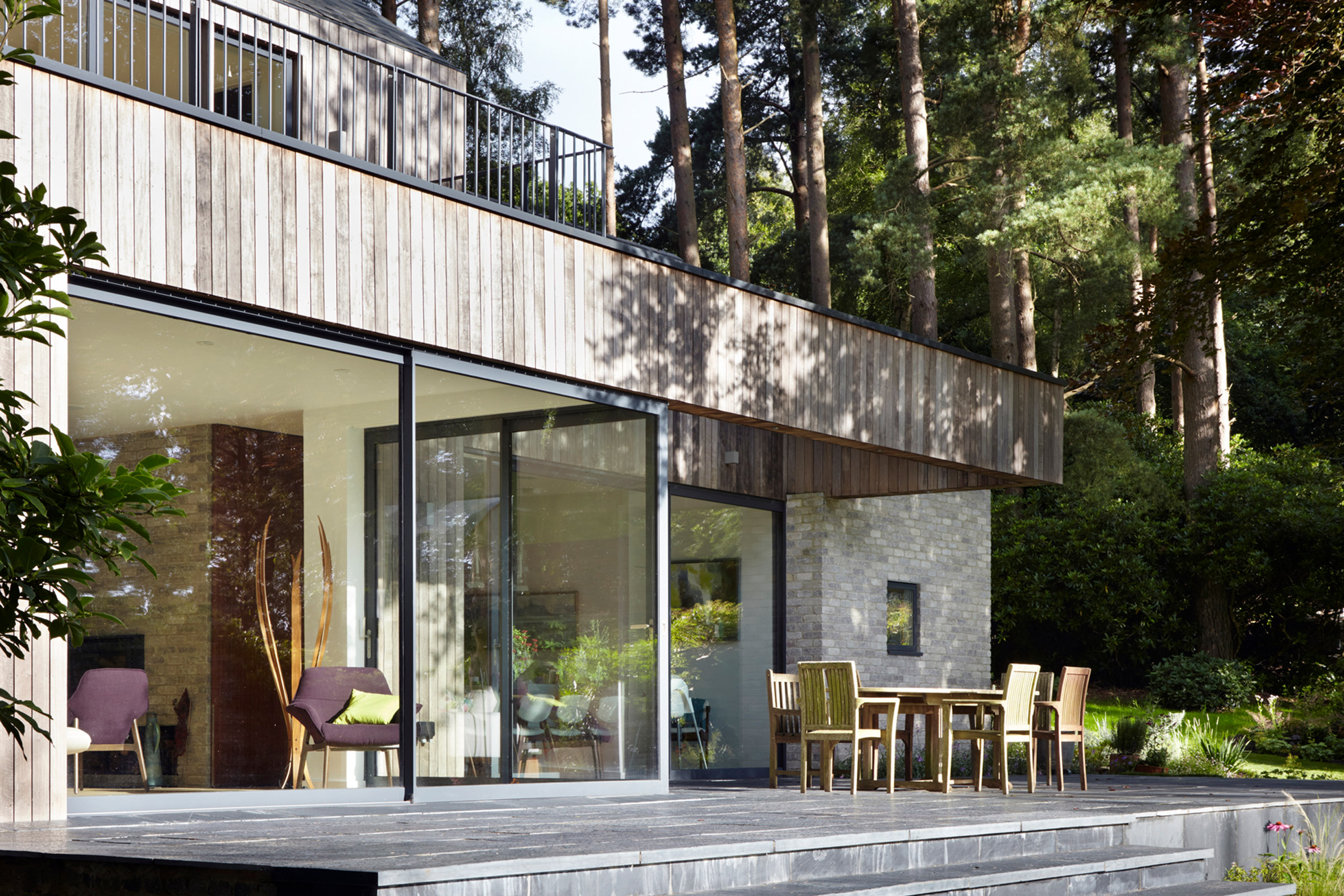 Full-height glazing set along the western elevation connects the communal spaces at the southern end of the building with a large outdoor deck, while a roof terrace is accessible from the first floor.

The bedrooms are situated in the more secluded northern end of the house, with the master bedroom and spare room on the upper storey accommodated beneath an asymmetric portion of the roof. 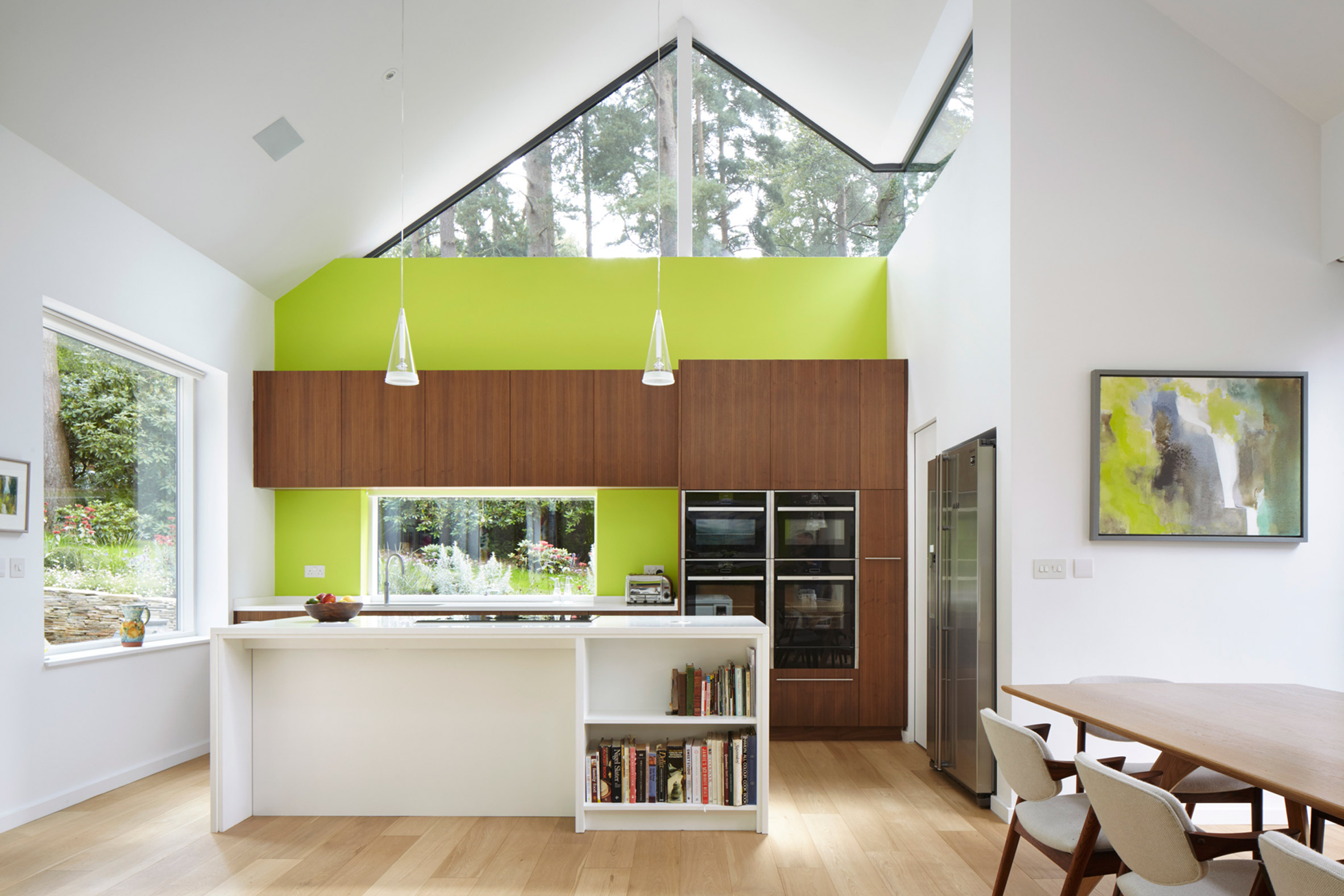 The roof at the southern end has a symmetrical gable incorporating a large clerestory window that floods the double-height kitchen and dining area with natural light.

The corner of the angular opening intersects with a perpendicular wall, so the frameless window wraps around the corner to extend the view of the treetops and sky. 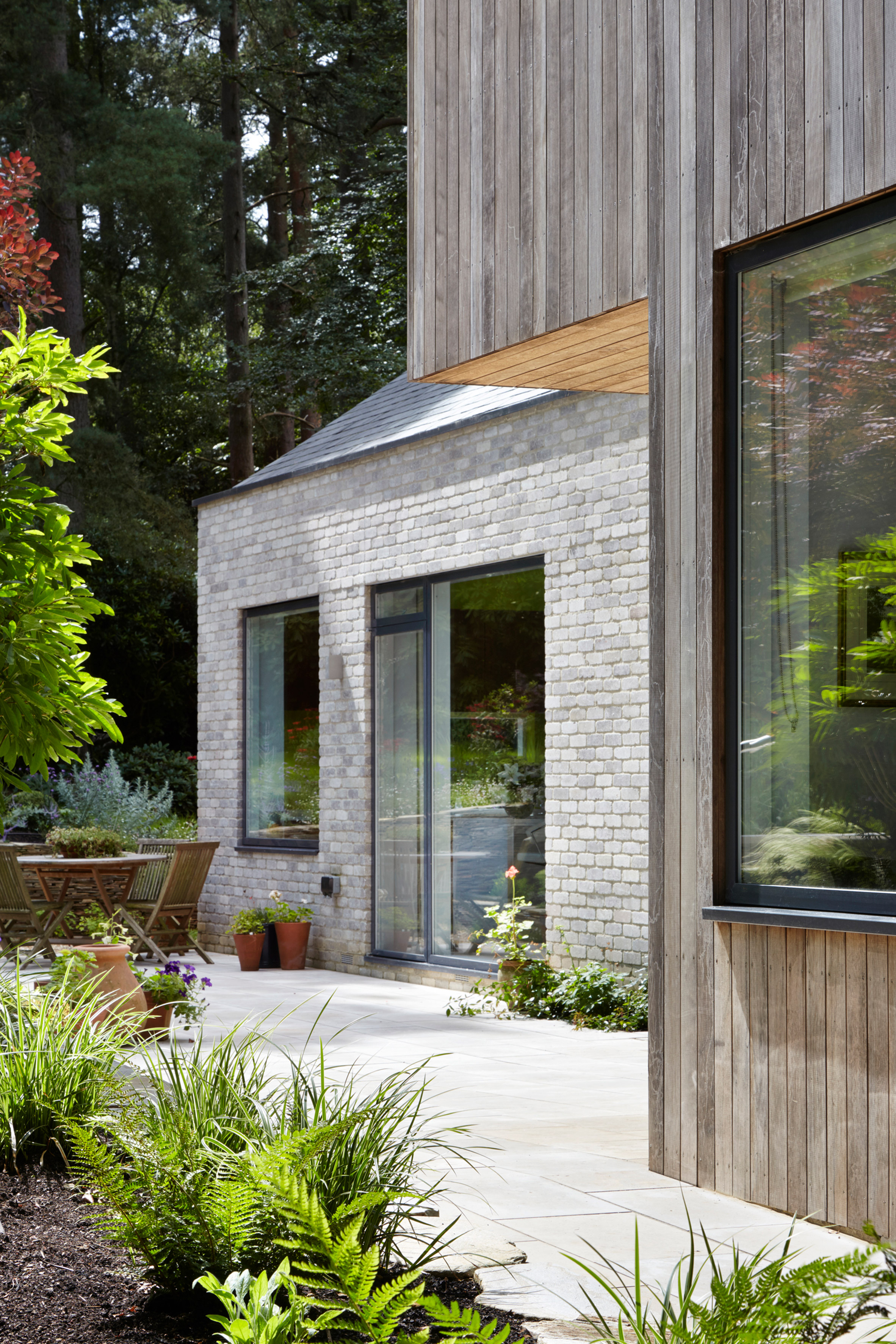 The roof’s shifting shape helps to reduce the overall visual mass of the building, which appears from the eastern approach as a single-storey structure emerging from a planted slope.

A palette of natural materials including hand-cut brick, timber and slate is applied across the exterior to help ground the house in its rural setting.

The materials are also used to differentiate between the more private east elevation, which is predominantly clad in brick, and the more transparent western side facing the garden, where thermally treated timber flanks the glazing. 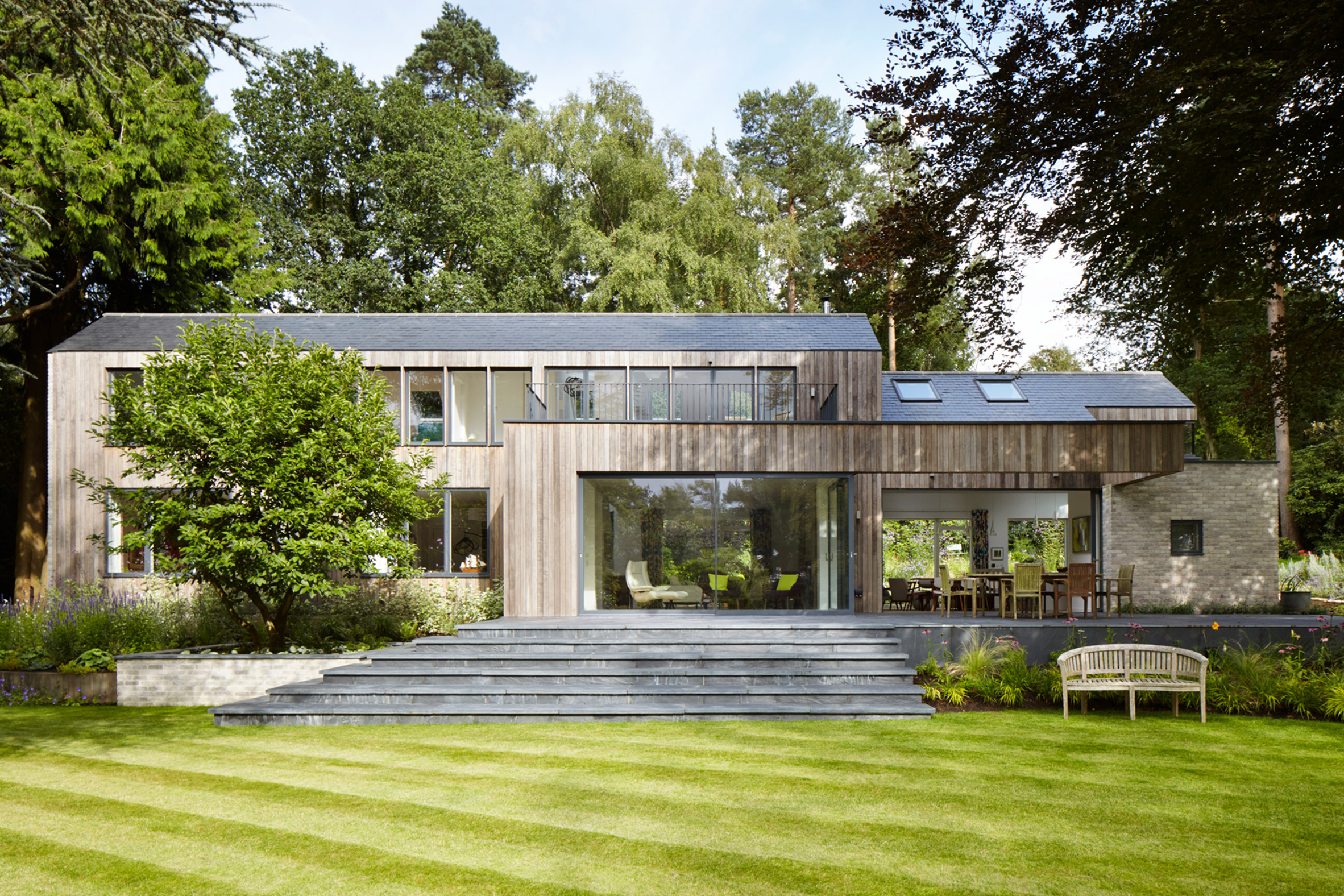 “These materials have been chosen for their natural qualities, creating a rich texture with muted tones that will blend well with the natural surroundings and their vegetation,” said the architects.

The building was constructed using structurally insulated panels (SIPs) to create a thermally efficient superstructure that was erected in just ten days.

A concrete floor acts as a heat sink that absorbs warmth in the summer and disperses it throughout the cool nights. The surface incorporates underfloor heating, which is connected to an air-source heat pump. 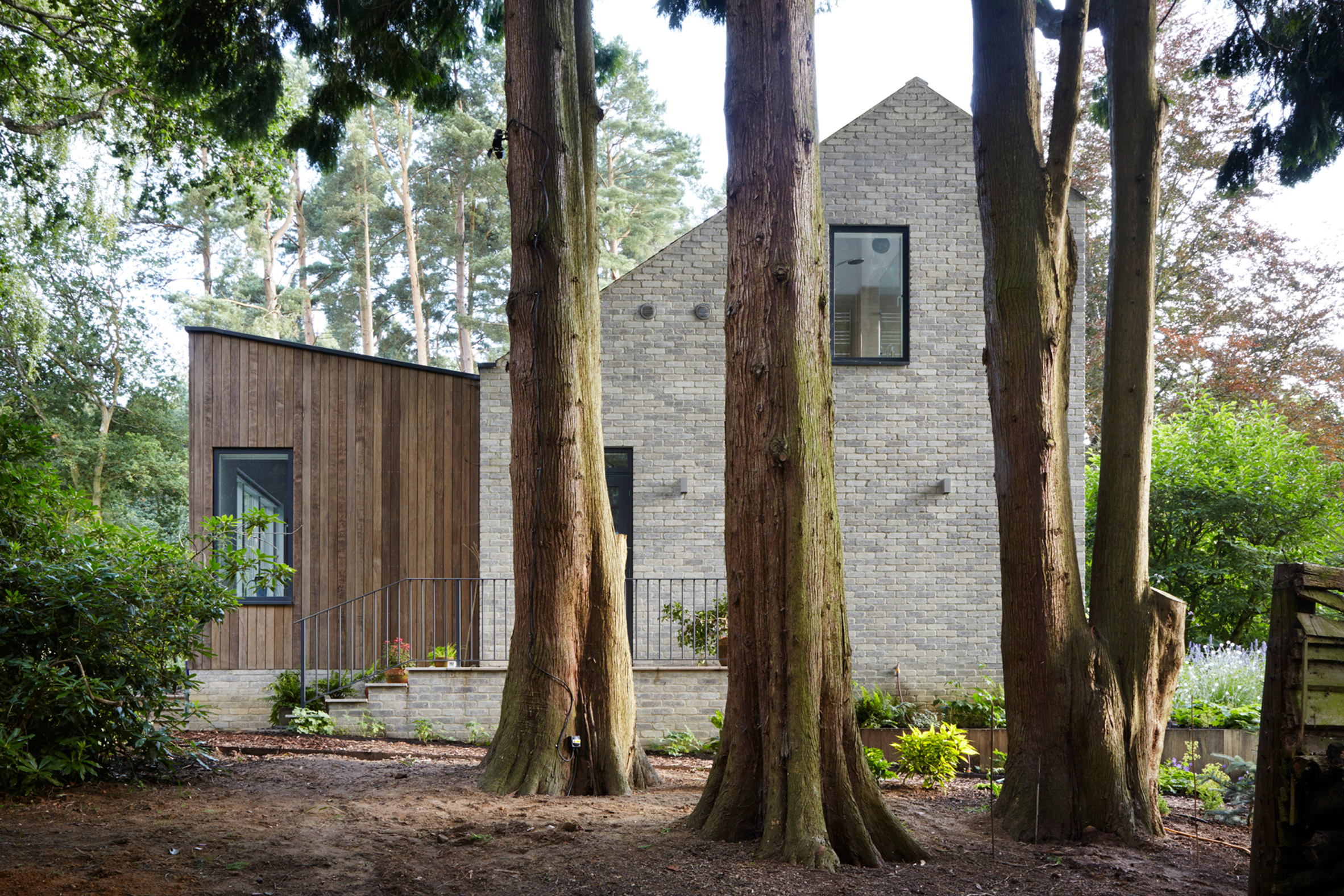 Alma-nac’s previous residential projects include a house extension in London featuring a huge pivoting door to the garden and a two-tiered house in Hastings with an upper storey that is angled and cantilevered to optimise the sea views. 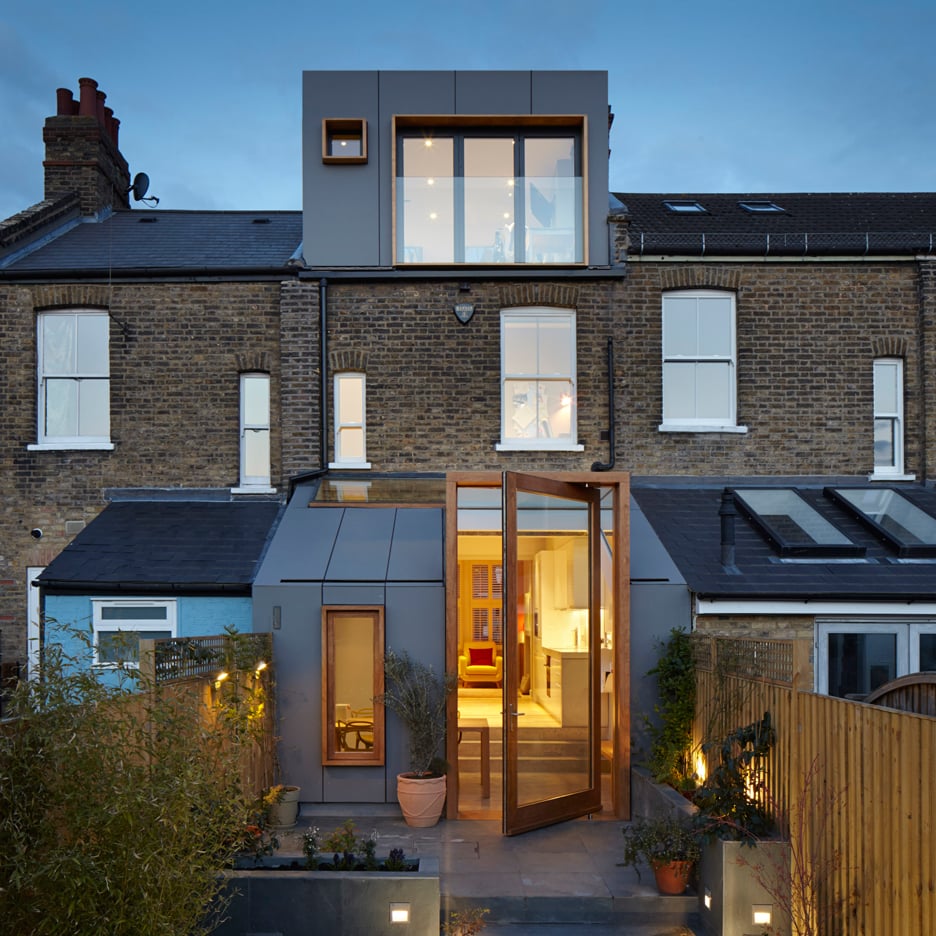 The post Alma-nac slots angular openings into timber-clad gables of House in the Woods appeared first on Dezeen.