Mustard Architects has added this extension to an Edwardian house in west London, featuring a tapered plan that expands towards angular glazed doors set into its asymmetric gabled facade. 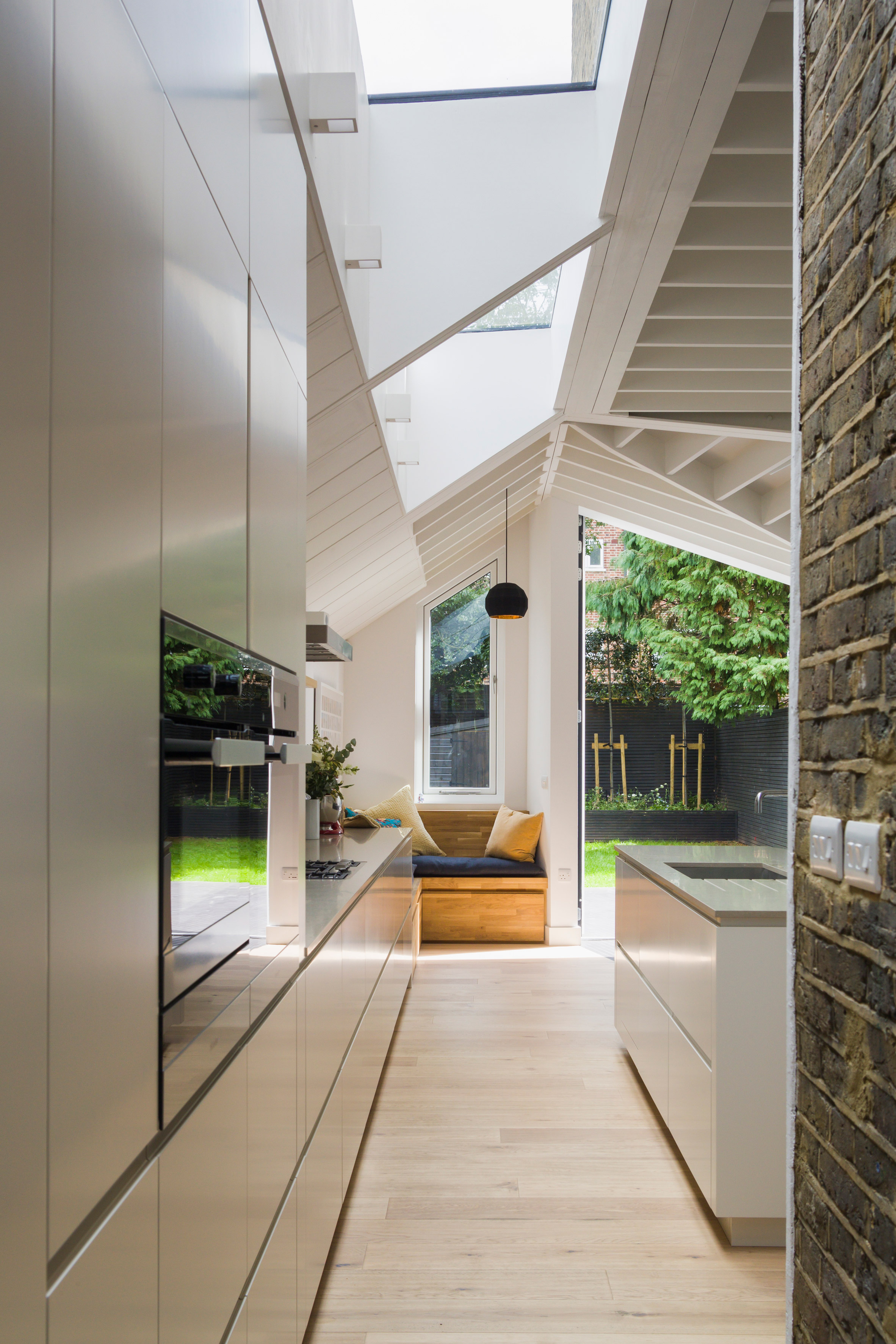 East London studio Mustard Architects was asked to renovate and extend the property for new owners who wanted a brighter, more contemporary interior with an enhanced connection to the rear garden.

The existing house featured a typically cramped and compartmentalised layout, so the studio began by removing unwanted partitions to create a more seamless series of spaces. 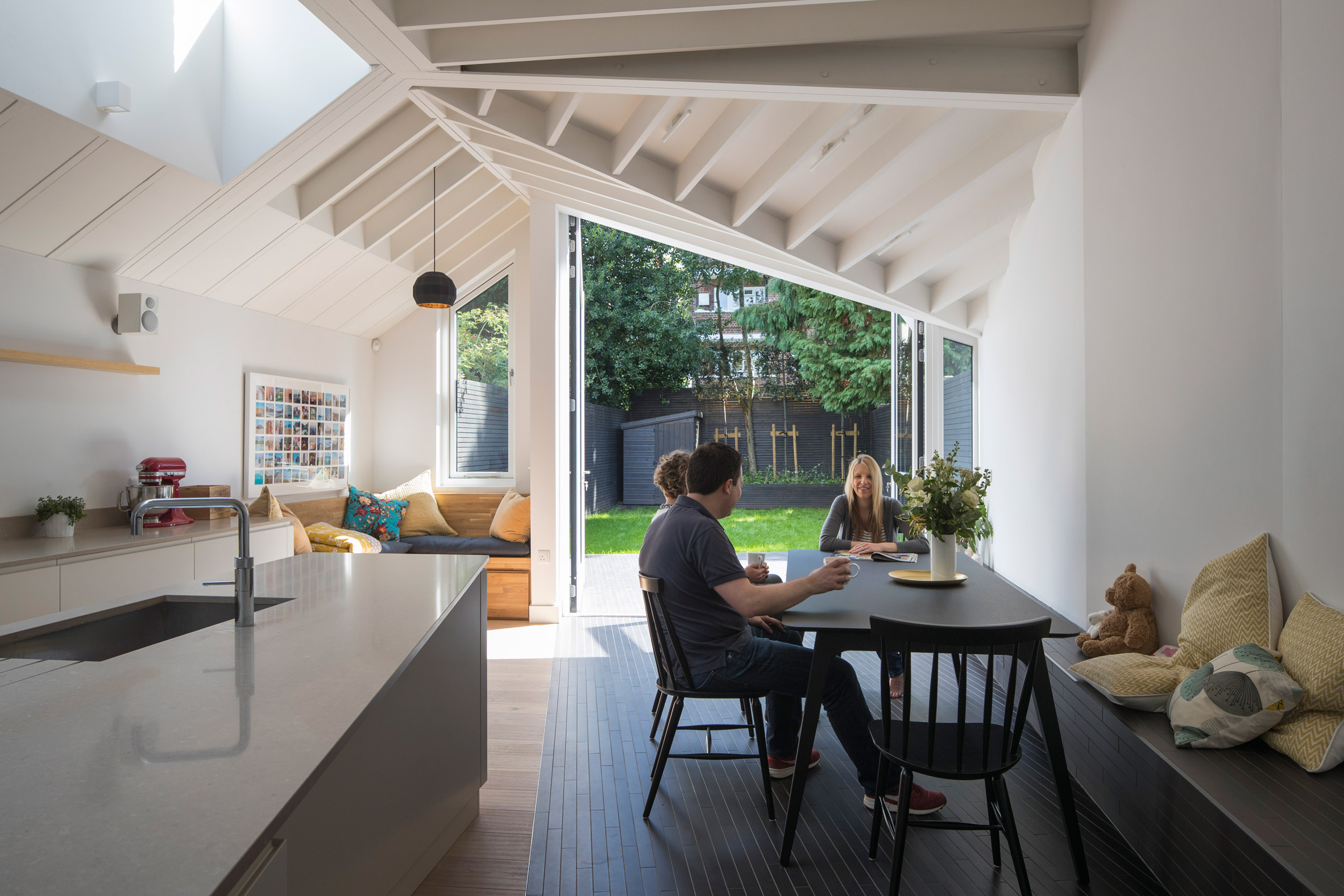 An angled hallway opens up as it extends from the front door towards the new addition at the rear, which houses an open-plan kitchen, dining space and snug.

The extension’s form was informed in part by local planning regulations. The resulting pitched-roof structure slopes down towards the boundaries on either side and prevents overlooking or overshadowing its neighbours. 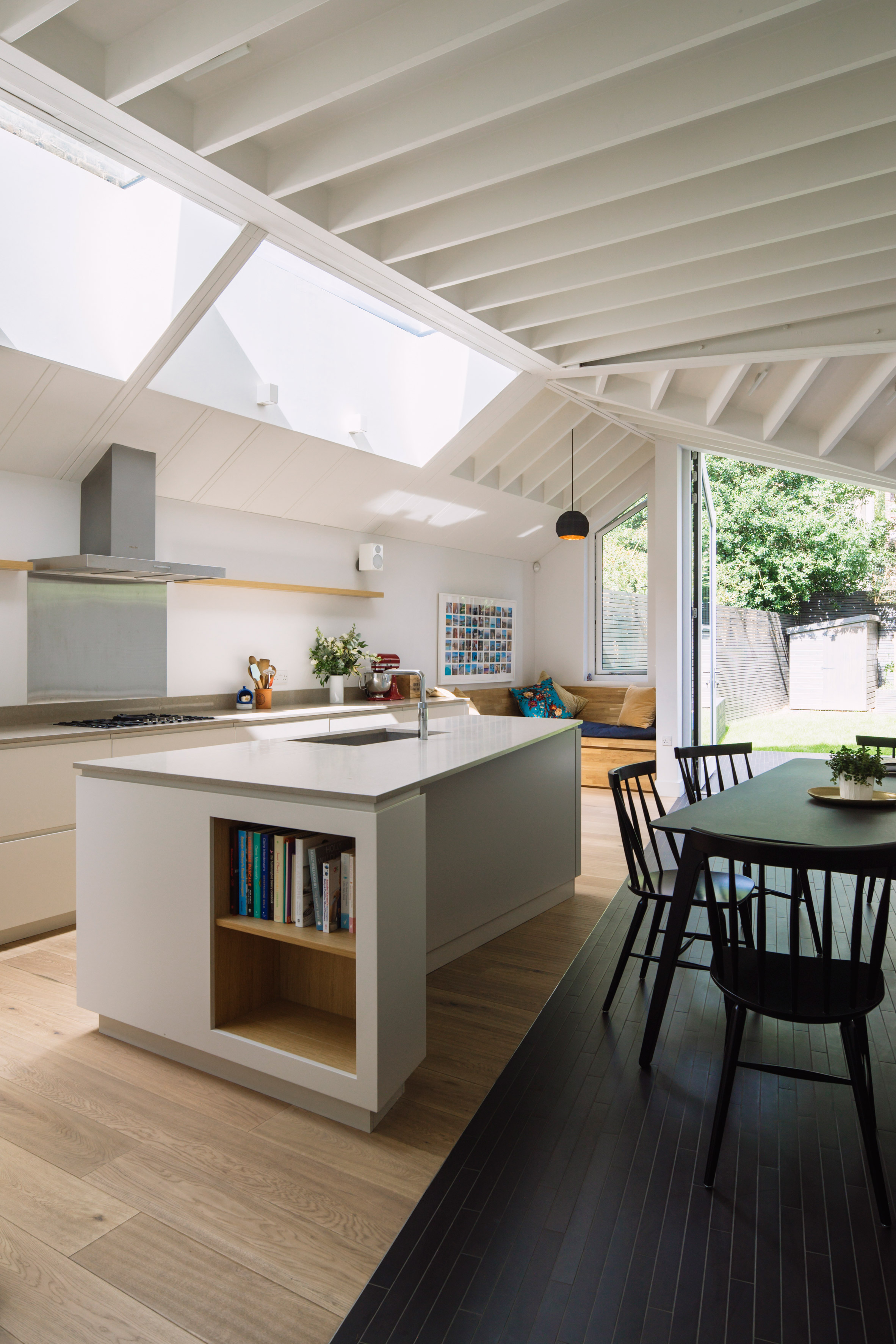 “Strict planning restrictions concerning extension boundary heights in conflict with our clients desire for voluminous space underpinned the angular roof planes that hover above the kitchen, dining area and snug,” said the architects.

“The steelwork, joists and rafters that would normally be hidden are exposed to reinforce the sculptural qualities of the form and components themselves.” 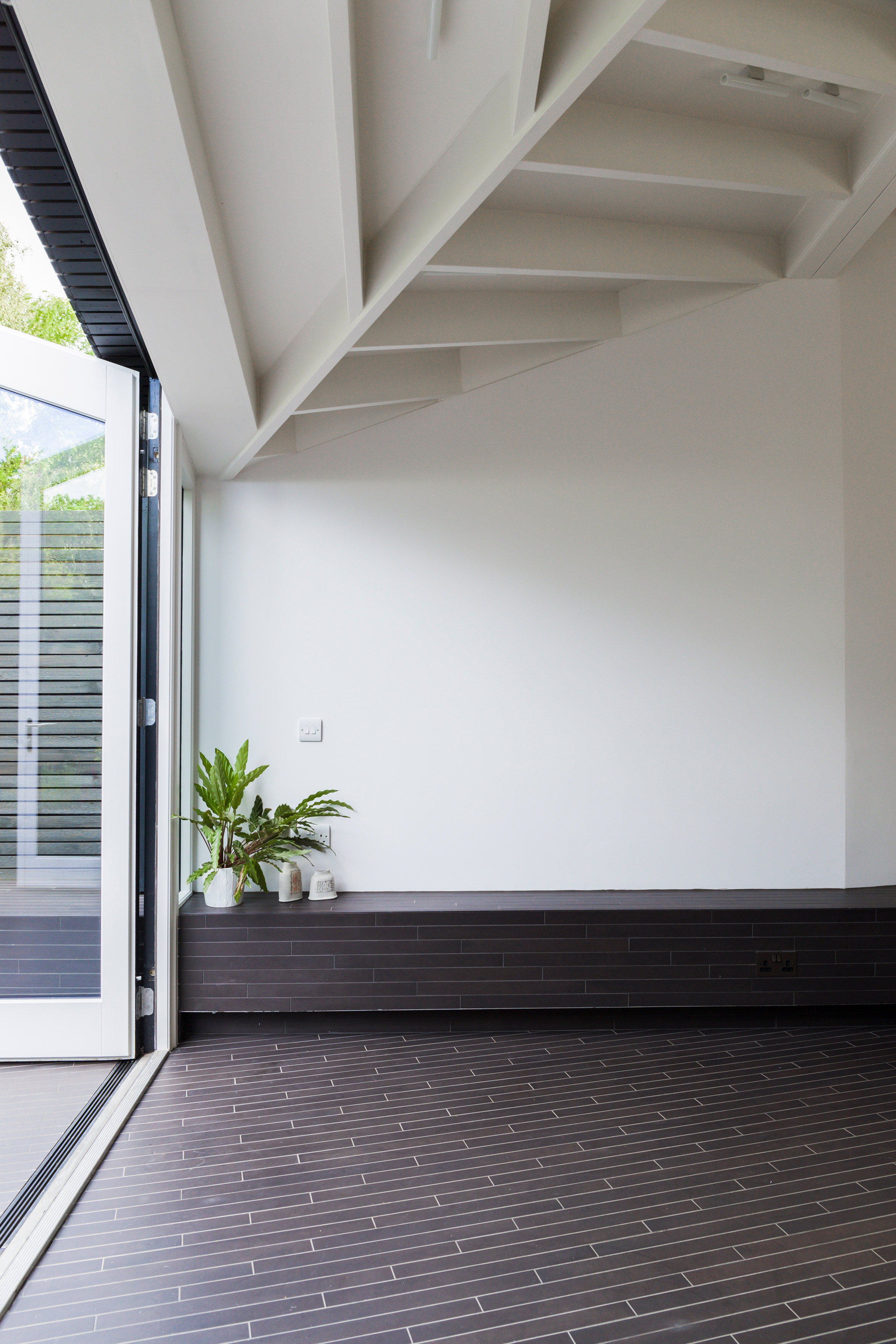 The end facade incorporates a pair of custom-made glazed doors that fill the entire space beneath the sloping roof to optimise the views of the garden and the amount of daylight entering the interior.

The extension’s elevations are clad in a combination of dark brick and matching stained timber. The same wood is used for the fences that line the garden, creating a consistent aesthetic throughout the exterior spaces.

A bench incorporated along one side of the dining area continues through the facade to connect the inside and outside spaces, and to provide usable external seating. 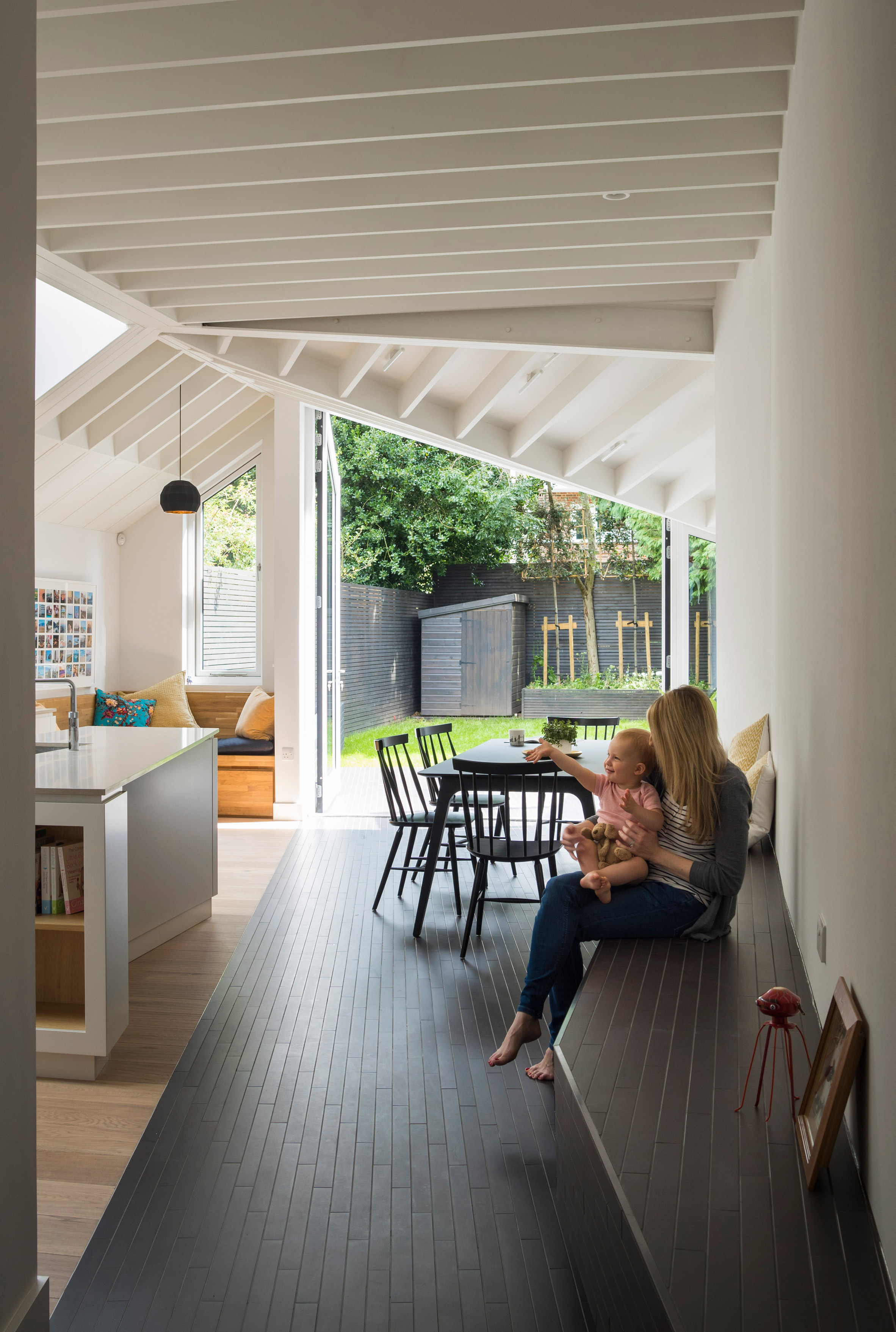 Inside the extension, two types of flooring follow the alignment of the angled hallway and delineate the different functional areas.

Oak floor boards contribute to the warm and bright feel of the kitchen, which is positioned beneath skylights incorporated into the pitched ceiling.

The dining space has black floor tiles that extend through the space and out towards the garden, where they form an angular patio. 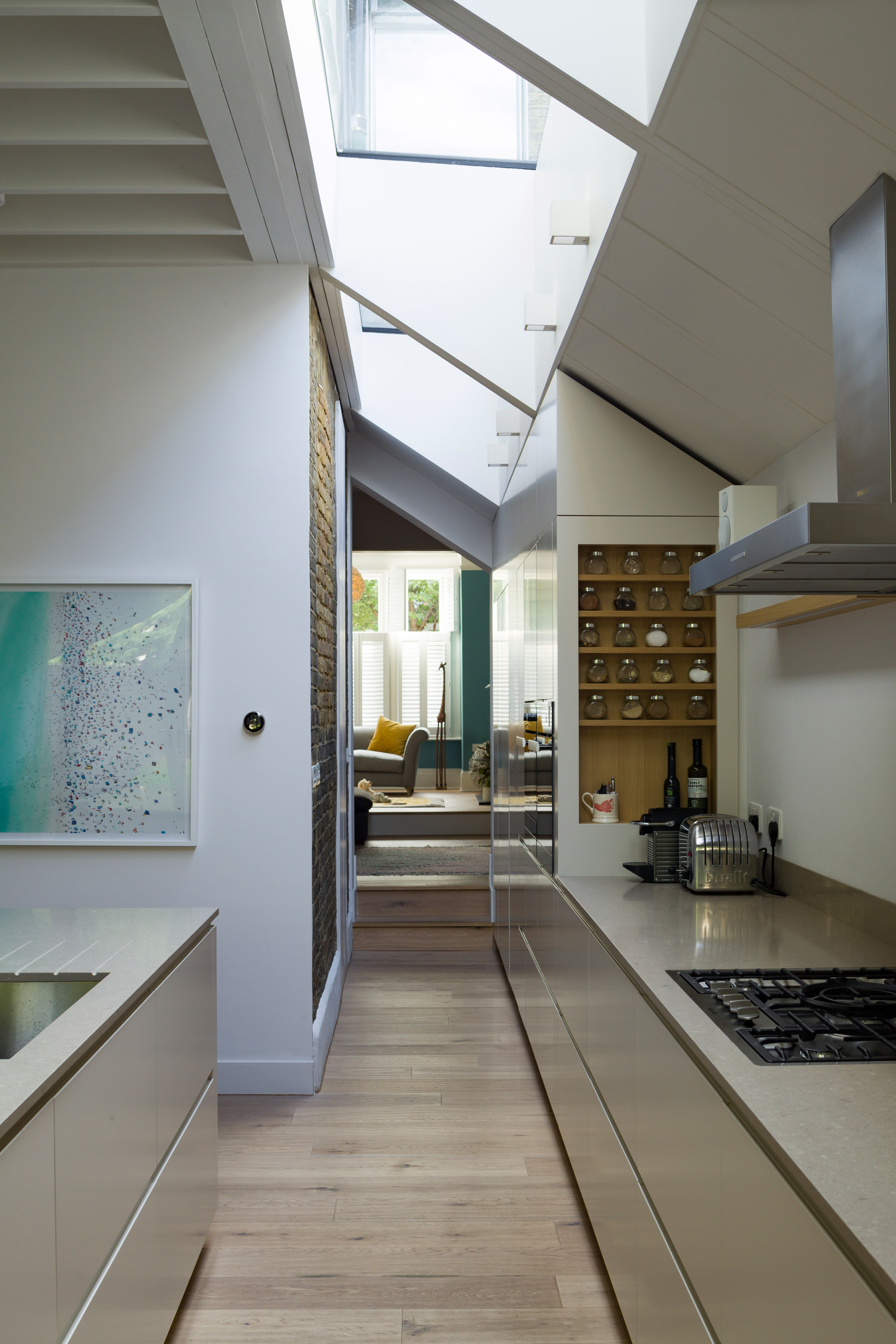 A wooden corner bench creates a snug that looks out onto the garden through a window set into the facade beneath the lower part of the roof.

From the snug, there is also a line of sight all the way past the kitchen and television room towards a reception room at the front of the house. 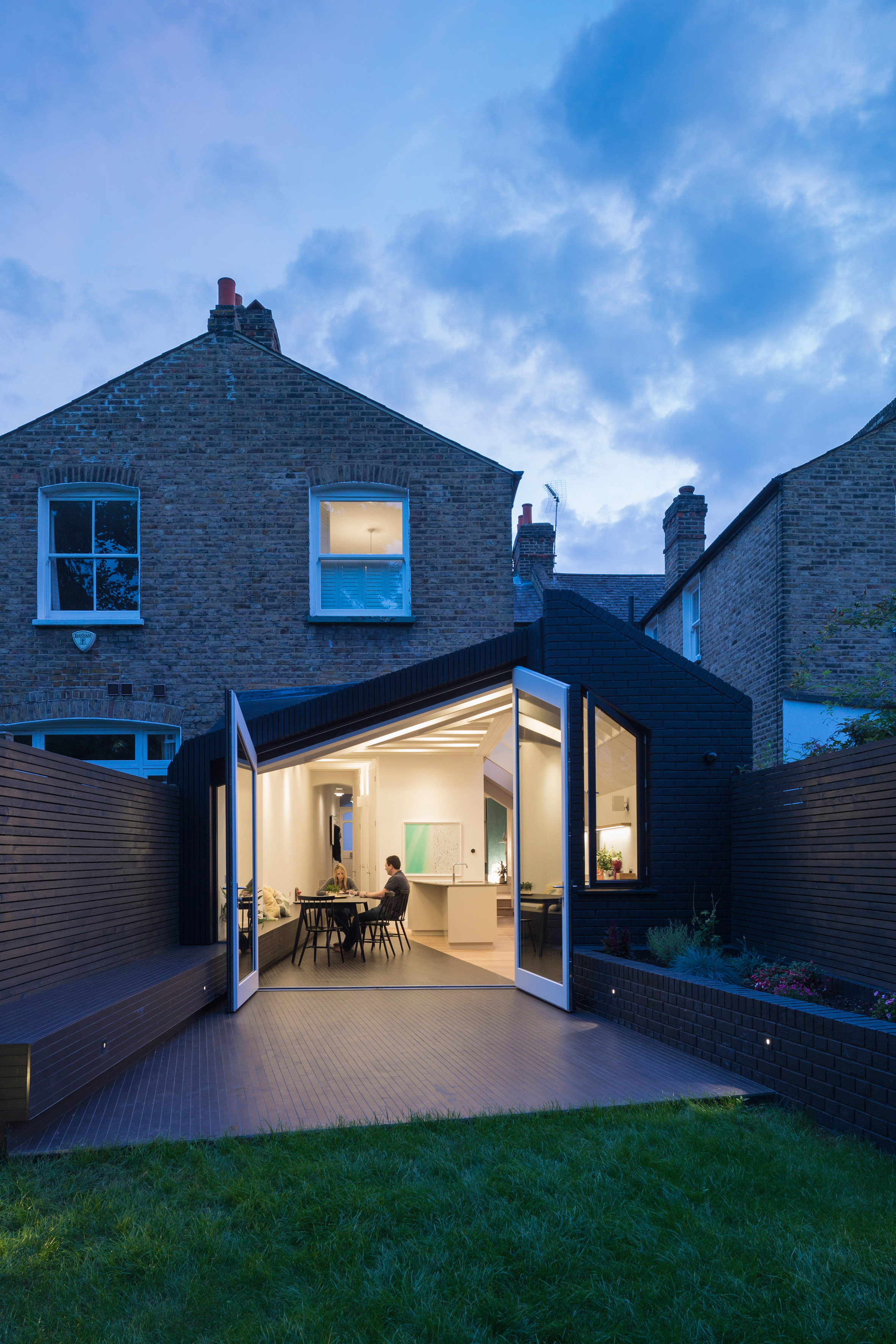 The overall winner was an extension to the rear of a Georgian townhouse featuring a curving canopy that wraps around the edge of a reflecting pool.

Photography is by Tim Crocker.