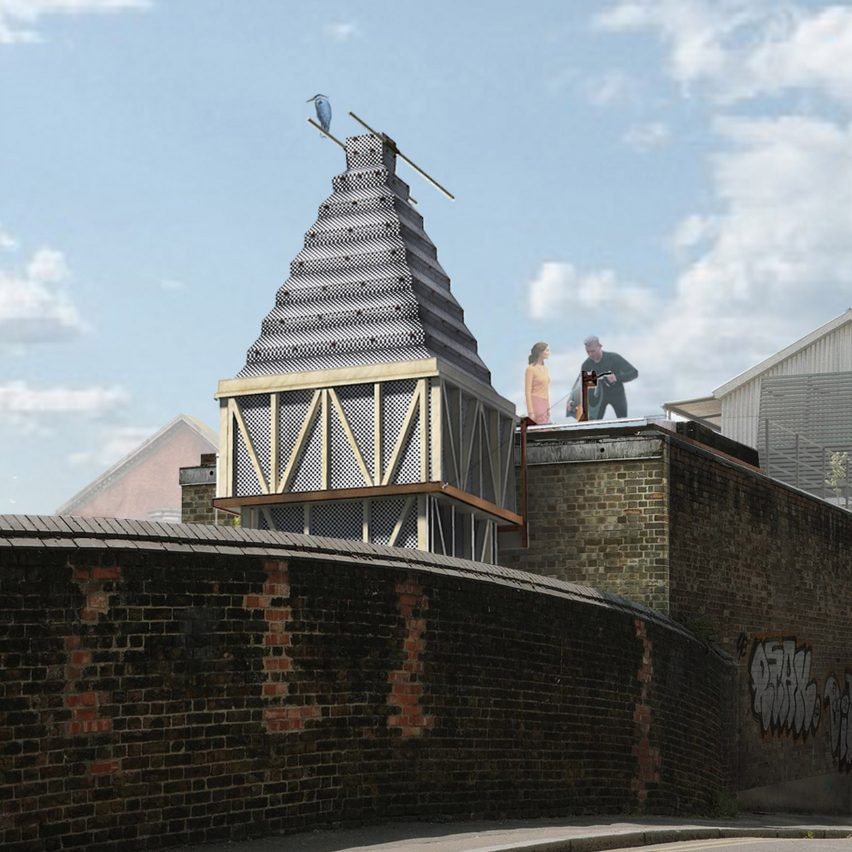 A collapsible camera obscura and a bamboo tensegrity structure have been revealed as the two winning designs of the 2021 Antepavilion architecture commission in Hackney, London.

The Antepavilion competition, which takes place annually in the UK capital, invites experimental designs and structures for construction at Hoxton Docks on Regent’s Canal.

This year’s brief called for demountable and transportable interpretations of a batizen – an overhanging, wall-mounted turret common in medieval fortifications.

It is the first time in Antepavilion’s five-year history that two winners have been chosen for construction.

Studio Nima Sardar is the overall winner with its design for a collapsible camera obscura named AnteChamber, while Morgan Trowland’s bamboo structure called All Along the Watchtower will be built as a “special early summer commission”.

AnteChamber’s design pays homage to Victorian fairgrounds and the area’s history, with the aim to resonate “with the Hackney planners’ concept of harmony with heritage architecture”.

It will feature a folding fabric roof and a demountable structure made of wood salvaged from Maich Swift Architects’ Potemkin Theatre – the structure that won the 2019 commission.

All Along the Watchtower is a reusable, lightweight bamboo structure that bears resemblance to the tensegrity towers, or beacons, used at Extinction Rebellion protests, which Trowland also created.

“This pavilion is an evolution of our beacons,” Trowland said. “The beacons embody the characteristics necessary in guerrilla-style confrontation with authority: agility, flexibility, adaptability, transportability, and security.”

The call for reversible structures in this year’s brief was due to a “background of ongoing and increasingly bitter litigation” facing the competition, according to organisers.

Antepavilion is locked in an ongoing legal battle with Hackney Council after its planning department issued a last-minute court injunction blocking the 2020 installation – a group of fibreglass sharks by Jaimie Shorten.

This year’s winning structures are therefore reversible and can be easily transported to a new location if necessitated by the court case.

“The 2021 Antepavilion competition has taken place against the background of ongoing and increasingly bitter litigation in which Hackney desperately tries to assert its authority by closing down the now internationally recognised event,” said Antepavilion.

“This background was fundamental to the Bartizan brief and the criteria that the jury had to apply to select a winner. The selected structures would be required to be expressly temporary, mobile or transportable, or otherwise not caught by prohibitive planning constraints that the council would be quick to adopt into their legal arsenal.”

Antepavilion’s relationship with planners has been strained since its inception, as all of the structures are built without permission and deliberately test the limits of planning laws.

Hackney Council has also served demolition notices for previous Antepavilions at the site, arguing that they “detract from the architectural integrity of the 1960s warehouse they sit on”.

The ongoing dispute led the Antepavilion charity’s former partner, the Architectural Foundation, to withdraw from organising the competition.

Previous winners of the Antepavilion competition include Thomas Randall-Page and Benedetta Rogers’ inflatable theatre on an old coal barge called AirDraft and Air Duct by PUP Architects, a rooftop room disguised as a ventilation duct.

Air Duct was the first-ever winner of the competition, which commented on the “hypocrisy” of planning decisions that allow ugly air-handling systems to be added to buildings without planning permission.