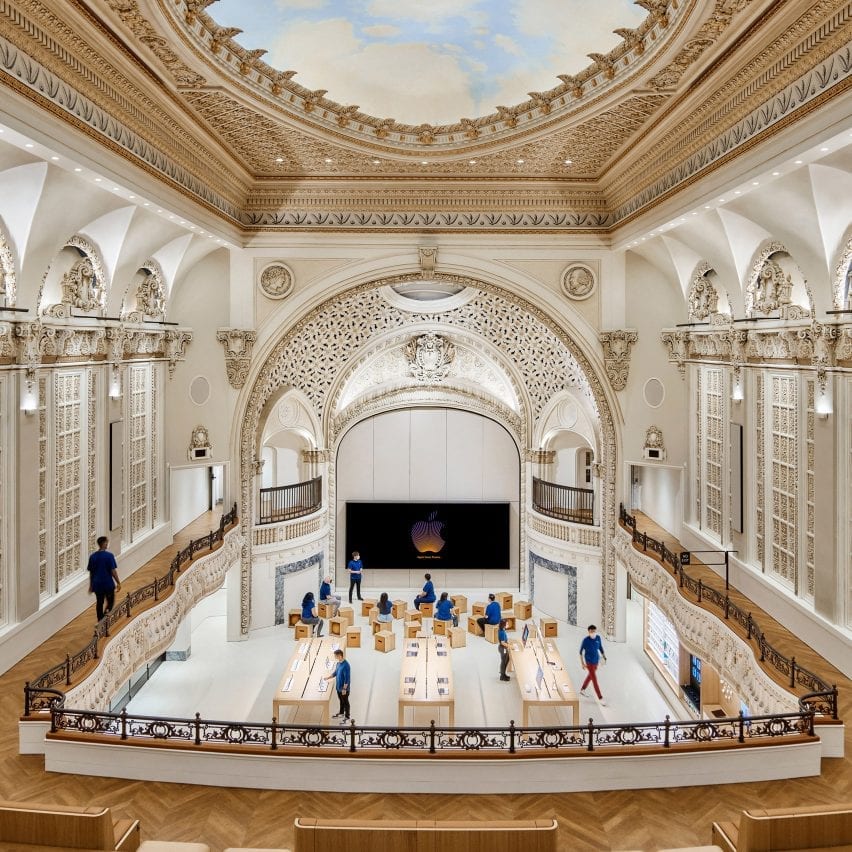 Foster + Partners worked with the technology company to renovated the historic building, which was originally designed by American architect S Charles Lee in 1927 in the baroque revival style.

At the intersection of Eighth Street and Broadway, Tower Theatre was the first theatre in Los Angeles to be wired for sound to showing motion pictures, but it had been shuttered since 1988.

Apple and Foster + Partners undertook the renovation in a collaboration with the City of Los Angeles and expert preservationists.

The project included restoring the theatre’s corner clock tower and renovating the blade sign that projects from its side.

Tower Theatre’s terracotta facade was also cleaned and a canopy that extends over Broadway was rebuilt.

Inside, a grand entry hall designed in the style of Charles Garnier’s Paris Opera House, complete with bronze handrails and marble columns, has been restored to its former splendour. The staircase features a plush red carpet.

At the centre of Apple Tower Theatre is the Forum, a large retail space with a display screen hung in the restored arch where the cinema screen would once have been.

The movie theatre’s original balconies remain in situ, and Apple plans to use the space as an auditorium for daily skills workshops and presentations from local filmmakers and musicians.

Original cinema seating on the upper level has been reupholstered and turned into a Genius Bar.

An original stained glass window with a pattern that includes coiled strips of film has also been painstakingly restored, along with a fresco of a blue and cloudy sky that arches over the double-height space.

Apple Tower Theatre is the 26th store opened by the technology brand in Los Angeles. It is the latest store designed by Foster + Partners, which recently restored and converted the Palazzo Marignoli in Rome into an Apple Store.

Other Apple Stores in historic buildings include a shop built inside a palazzo in Rome by Foster + Partners and the Carnegie Library in Washington DC, which was built in 1903 and converted into a shop for the technology company by Beyer Blinder Belle.

Dezeen recently rounded up 10 of the most appealing Apple Stores designed by Foster + Partners.

The photography is courtesy of Apple.