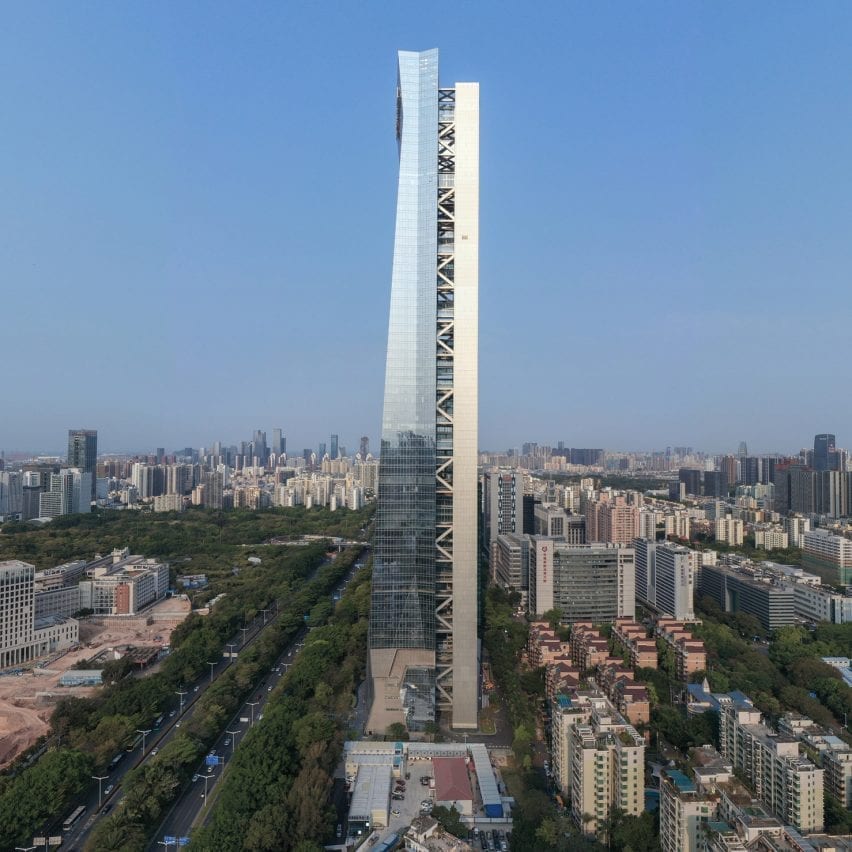 US architecture studio Morphosis has unveiled the 359-metre-tall Hanking Center supertall skyscraper in Shenzhen, China, which has a detached structural core.

Described by the studio as an “asymmetrical skyscraper”, the supertall building in the high-tech district of Nanshan in Shenzhen appears as two interconnected towers.

The skyscraper has a structural steel core containing the majority of the building’s lifts and mechanical services.

This is separated from the 65-storey-building’s office space in a structural arrangement similar to Rogers Stirk Harbour + Partners’ Leadenhall building, which is known as the Cheesegrater, in London.

The offices and structural core were built ten metres apart and connected by numerous bridges to create what Morphosis founding partner and Pritzker Architecture Prize-winning architect Thom Mayne describes as “a threshold” space.

“As a typology, skyscrapers tend to emphasize shape as the primary differentiator,” said Mayne.

“Instead, we focused on lived experience within the city. The delamination between the circulation core and the office spaces within the tower generates a threshold, an intensification of the urban landscape as part of the day-to-day.”

Morphosis separated the structural core from the offices to create a form that responds to the nearby Shenzhen University campus.

The decision also created large, column-free spaces in the glass-clad office tower that have expansive views across the city.

“We were interested in several primary concepts when approaching the form for Hanking Center: first, offering a large, contiguous, column-free floor space with 270-degree views, which could be achieved by a detached core configuration; second, not to get trapped in a game of ‘sculptural shaping’; and finally, to respond to the campus of Shenzhen University which lay directly south of the tower,” explained  Morphosis partner Eui-Sung Yi.

“This resulted naturally in an asymmetrical skyscraper with two joined ‘towers’: a clear primary front volume facing the campus of the Shenzhen University, and the core tower to the north.”

While the steel structural core rises vertically, the office tower’s form contracts and then expands as the building rises to give the skyscraper “a sense of movement”.

The arrangement also created a variety of different-sized floor plates within the tower.

“The shape was driven both by structural dynamics –achieving stability by being wider at the bottom, narrower at the top – and the opportunity to provide different-sized floor areas for different tenant types,” explained Yi.

“For example, some tenants seek the symbolic value of having a whole dedicated floor despite a smaller workforce and space demands.”

The studio hopes that the tower embodies the spirit of Shenzhen.

“With its enthusiasm for new possibilities in the design and experience of a commercial tower, you could say Hanking Center embodies the entrepreneurial and innovative ethos of Shenzhen, a prototypical 21st-century city which has utterly redefined global touchstones of urban development,” said Yi.

“Locally, it anchors Shenzhen’s emerging high-tech district in Nanshan, and the expressive structure and material palette speaks to the focus of its projected tenant base of startups and leading tech companies.”

Founded by Mayne, architecture studio Morphosis has offices in Los Angeles, New York, and Shenzhen. The studio recently revealed a pair of contrasting towers for Viper Room nightclub site in Los Angeles and a headquarters building for athletic clothing brand Lululemon in Vancouver.

The Hanking Center is the latest supertall skyscraper – a building over 300 metres – to be built in Shenzhen with Kohn Pedersen Fox’s bullet-shaped office for the China Resources export company recently completing.

Other upcoming supertalls in the city include a pair of connected 400-metre-tall towers being designed by Zaha Hadid Architects and Adrian Smith + Gordon Gill’s 700-metre-high Shenzhen-Hong Kong International Center, which would be the tallest building in China.