Foster + Partners’ Apple Park is an “anachronism wrapped in glass” that provides a poor model for company campuses, claims the first major critical review of the project, published by technology magazine Wired.

As the campus is still not fully complete, there has so far been little in the form of criticism of the ring-shaped structure, its surrounding park and ancillary buildings.

But Wired has published a scathing review – mainly criticising the project’s lack of consideration for responding to, or improving, the Bay Area city of Cupertino in which it is located.

“Apple’s new HQ is a retrograde, literally inward-looking building with contempt for the city where it lives and cities in general,” reads the article, titled If You Care About Cities, Apple’s New Campus Sucks.

Its author, Wired deputy editor Adam Rogers, likens the futuristic-looking campus to the suburban tech headquarters of the 1950s.

“By building a mega-headquarters straight out of the middle of the last century, Apple has exacerbated the already serious problems endemic to 21st-century suburbs like Cupertino – transportation, housing, and economics.”

“Apple Park is an anachronism wrapped in glass, tucked into a neighbourhood,” he adds.

Rogers lays into the design of UK architecture firm Foster + Partners‘ circular principal office building, saying that it offers little opportunity for change, expansion or legacy – should Apple choose to leave or relocate in the future. Architectural adaptability has been key to Silicon Valley’s past success, it adds.

“When you have a statement building like the Spaceship, the circuit can’t complete,” says Rogers. “If Apple ever goes out of business, what would happen to the building?”

“That’s why nobody builds these things anymore,” he continues. “Successful buildings engage with their surroundings – and to be clear, Apple isn’t in some suburban arcadia. It’s in a real live city, across the street from houses and retail, near two freeway onramps.”

Apple has not done enough to improve public transport infrastructure for employees living in San Francisco and San Jose, says Rogers, and instead chose to bolster roads that will encourage drivers and increase congestion.

It provides buses for commuters, although only 1.5 per cent of employees currently use public transport to reach the campus, and the company has not gone as far as rival Google by adding accommodation close to the site. Only 10 per cent of Apple’s workers live in Cupertino, according to the article.

Paying relatively small sums for parking restitution to nearby towns , and has created a recycled-water distribution system that will benefit Cupertino’s other development projects, but Rogers says that “these community benefits feel small”.

“The company could have chipped in to double the frequency of CalTrain’s commuter rail,” he says. “It could have built a transit centre in Cupertino, which, unlike Mountain View and Palo Alto, has none.”

“It’s hard to get them to help fix local problems. They have even less of an incentive to solve planning problems than California homeowners do.”

The article points to the almost-complete Salesforce Tower in San Francisco as a comparative model for successful office development. Apple’s ring provides 2.5 million square feet (230,000 square metres) of workspace on 175 acres (71 hectares), while the skyscraper offers 1.5 million square feet (140,000 square metres) on just an acre (0.4 hectares), is directly connected to major transit station, and cost one-fifth of the price to construct.

“A more contemporary approach to commercial architecture builds up instead of out,” says Rogers.

“But putting form factor aside, the best, smartest designers and architects in the world could have tried something new. Instead it produced a building roughly the shape of a navel, and then gazed into it.”

“It may look like a circle, but it’s actually a pyramid – a monument, more suited to a vanished past than a complicated future.”

All of the 12,000 Apple employees due to work at the campus are expected to have moved in by September 2017, when the company anticipates the majority of the architecture and landscaping to be fully finished.

Apple and Foster + Partners both feature prominently on Dezeen Hot List – our ranking of the most-searched for names in architecture and design. 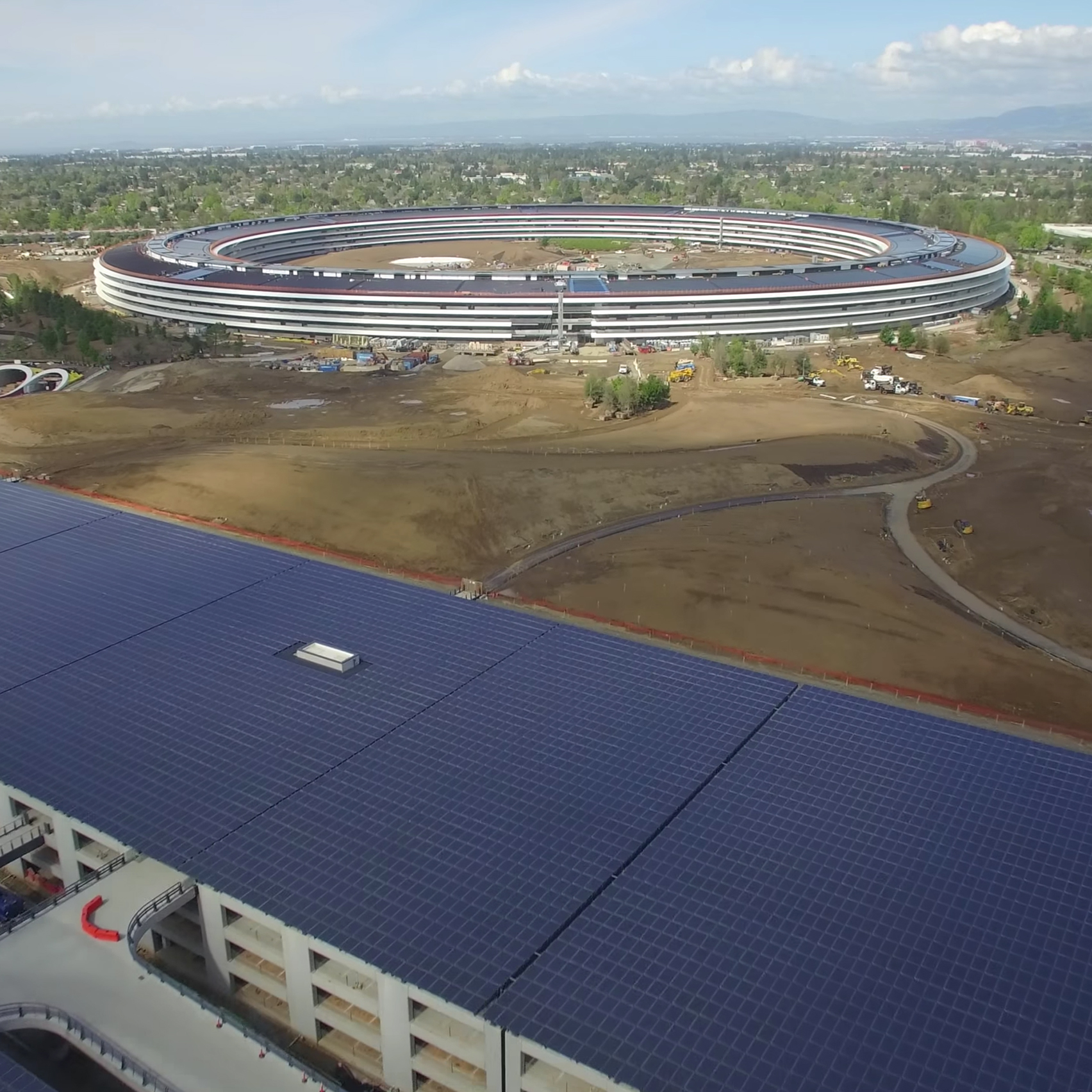