The impact that the High Line had on New York real estate can teach architects “a really good lesson” on the need to manage gentrification, says Elizabeth Diller in the second part of our exclusive video interview at the RIBA International Conference.

She claims that its huge success was unexpected and that the city wasn’t prepared for the pace of gentrification in the surrounding area, as a direct result. It offers a valuable lesson, she says, about how architects could be more involved after a project’s completion.

“It makes one feel that, post-occupancy, there should be a role for architects to think about what their projects have wrought and to be able to manage the effect in some way,” she says in the movie, which Dezeen filmed for the Royal Institute of British Architects.

“What would happen if this were a success? How could it grow out? I don’t think that anybody really did that [for the High Line].”

Diller says she is pleased with the success of the High Line and how it has sparked the rejuvenation of a run-down part of New York, but she believes that more regulation could have been put in place to control the impact of the development.

“Often I am asked the question: ‘Do I feel badly about what happened with all the overdevelopment on the High Line?’ And the only thing I can respond with is: ‘Should we have done it any less good?’ There’s no really good answer to this,” she says.

“But looking back on that period, there could have been legislation to make sure there was more equity in the way that these properties developed: making sure that inclusionary zoning is part of the overall mix; that you can get different income levels as part of a city fabric; that you don’t evict artists all of a sudden because they can’t pay the rent.”

Since the first sections of the High Line opened in 2009, a host of new residential buildings have been commissioned in the area, by prominent architects including Zaha Hadid, Jean Nouvel and Shigeru Ban. Additionally, Renzo Piano‘s new building for The Whitney Museum of American Art opened beside it.

“All of a sudden this property that was fairly devalued – because there was this obsolete piece of infrastructure running through it – started to have worth and they started to flip,” Diller says.

“There’s actually a lot of architecture that came out of it, but unfortunately the low and middle income people were disenfranchised and the properties were no longer affordable.”

Other cities that have aimed to replicate the success include Seoul, where MVRDV transformed an old elevated highway into a park, and Singapore, which is proposing a 24-kilometre-long park.

Diller hopes that these cities and others will learn from the High Line, by looking to manage the effects of big infrastructure projects more carefully.

“The project had a trajectory that was unexpected – it became extraordinarily popular, more popular than we could have ever envisioned,” she says.

“I think it is really a good lesson for all the people involved in the High Line and also for all the other initiatives that are taking place all over the world – how to manage development in a responsible way.“

Diller spoke to Dezeen shortly after taking part in a panel discussion that explored the New Urban Agenda – the United Nations’ global strategy for sustainable development and housing over the coming two decades.

In the first part of the interview, she said that architects should be more proactive in driving forward development proposals. 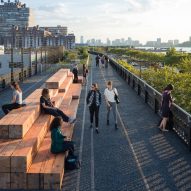 Photography is by Iwan Baan, apart from where otherwise indicated.

The post Architects can help to manage gentrification caused by projects like the High Line, says Liz Diller appeared first on Dezeen.