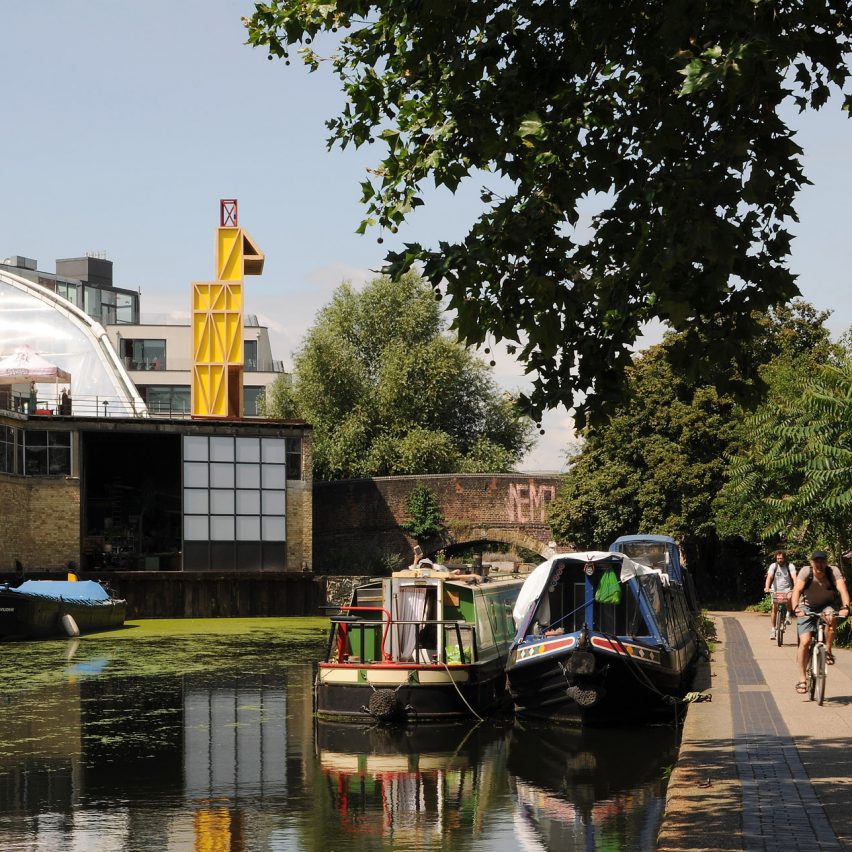 London’s Antepavilion charity has launched its fifth annual pavilion competition without former partner the Architectural Foundation, which has withdrawn due to ongoing battles with the local planning authority.

Competition organiser Russell Gray told Dezeen the foundation had “taken frighted” [sic] after Hackney Council served an injunction on the 2020 pavilion, which saw fibreglass sharks placed in a canal.

“We are not working together with the Architecture Foundation this year them having taken frighted being on the other end of an injunction we are promoting it entirely ourself,” wrote Gray, whose property company Shiva owns the Hoxton Docks venue where all four Antepavilions have been built.

A spokesperson for the Architectural Foundation confirmed that the organisation is no longer involved with the annual design competition.

Designed by Jaimie Shorten, the Sharks! installation was the fourth annual pavilion built at Hoxton Docks on the Regents Canal in Hackney.

As with the previous pavilions the Sharks! installation did not have planning permission and the council asked organisers to remove it along with other structures on the site.

The brief for the 2021 edition of the provocative competition asks designers for their take on a bartizan, which is an overhanging turret that was used in the medieval architecture.

As with previous pavilions, this year’s competition will deliberately challenge planning regulations.

Unlike the previous four years, the 2021 competition will be run without the support of London architectural charity the Architecture Foundation and will be solely organised by arts and architecture charity Antepavilion.

The Architecture Foundation withdrew its involvement following a legal battle with Hackney Council that began to in 2019 and is still not resolved.

The legal battle came to a head when the council blocked the installation of the 2020 Antepavilion by architect Jaimie Shorten, which consisted of five fibreglass sharks.

Hackney Council has also issued a demolition notice for several previous Antepavilions plus other rooftop structures at the site, none of which have planning permission.

The Antepavilion competition was launched in 2017 by the Architecture Foundation and developer Shiva as a way of commissioning emerging architects.

The first pavilion, Air Duct by PUP Architects, consisted of a rooftop room disguised as a ventilation duct at Hoxton Docks on Regent’s Canal in east London. It was designed to be provocation towards planners as air-handling equipment can be installed without planning permission.

This structure along with the 2019 pavilion – a three-storey rooftop theatre, and the 2018 pavilion – an inflatable performance venue on a barge, are at risk from the current legal dispute.

The 2021 Antepavilion contest is intended to be a reflection of the ongoing legal battle with the council.

“This ongoing litigation and the public inquiry soon to be scheduled for hearing by the planning inspectorate continues to set the scene for the 2021 competition – as the council’s first 2019 enforcement notice did for 2020,” said the competition brief.

Entries to this year’s competition are encouraged to take into account the possibility that they will be ordered to be dismantled.

“Demountability, adaptability and transportability of the winning structure will be a potentially valuable feature in this year’s entries,” said the brief.

“If the council were to proceed to court for another injunction the 2021 winner should preferably be able to migrate to another position on the site or a completely different location,” it continues.

“Teams might also want to take a careful and imaginative look at the General Permitted Development Order to see what possibilities it offers for legally unchallengeable development.”

Main image is of the Hoxton Docks site. Photography is by David Grandorge.