Astana Expo 2017 may have aspired to a post-carbon future, but it was hard to imagine from the capital of a country made wealthy by fossil fuels, says Owen Hatherley.

The thing not to say about the expo building in Astana, Kazakhstan, is that it looks like the Death Star. Designed by Adrian Smith and Gordon Gill, it is a near-perfect glass sphere, with a concave spherical perforation at the top. But it is best not to draw the resemblance too far, particularly given that the website of the US journal Foreign Policy found itself briefly blocked in Kazakhstan because of an article tactfully headlined “Kazakhstan spent $5 billion on a Death Star, and it doesn’t even shoot lasers”.

Anyway, the Death Star, you will recall, was black, whereas the expo building is translucent and clear. Or rather it would be, if it wasn’t for the large sheet of canvas draped over half of it so as to reduce glare and heat from the deeply unsympathetic climate. The theme of the building, and of the expo more generally, was Future Energy – a showcase, in a post-Soviet Central Asian country made wealthy by fossil fuels, of what we’re meant to do without them.

It was too easy to mock the pretensions of Expo 2017 and the capital city that hosted it. If anywhere knows about the consequences of an all-out-war against nature and ways of adapting to it, it is Kazakhstan.

If anywhere knows about the consequences of an all-out-war against nature and ways of adapting to it, it is Kazakhstan

The Aral Sea, shared with Uzbekistan, partly became desert as the result of irrigation. The Soviet space programme launched its satellites from here, at the Baikonur Cosmodrome. The northern steppe of this huge country was host to the Semipalatinsk Test Site, where the Soviets tested their nuclear weapons for decades. From the mid-1950s, part of it was the focus of the Virgin Lands campaign, which aimed, and eventually failed, to exceed American grain production in one burst of activist enthusiasm and aggressive agricultural engineering.

The “capital” of this endeavour, which saw massive Russian immigration into the Kazakh Soviet Republic, was Tselinograd, the Virgin Lands city. Since 1998, Tselinograd has been the “right bank” of a new capital, simply called Astana (the Kazakh word for capital).

The monumental spaces of the left bank of the Ishim River – planned by Kisho Kurokawa, with several major buildings designed by Norman Foster – are at least in part a de-colonising project, aiming to de-Russify the north of Kazakhstan. Where better than this flat, interminable landscape, more brutally transformed in the last hundred years than anywhere else on earth, to imagine how to re-engineer industrial society and prepare for a post-carbon future?

Astana is a wholly pedestrian-hostile city

Well, if you are hoping that it just might be possible, and that the storms and migrations of the last few years aren’t going to become the new normal, then hopefully you didn’t visit Astana for Expo 2017. That non-Death Star, placed on an axis around which the expo revolved, was the centrepiece of a self-powered site, with the air-conditioning that makes it bearable to enter generated via wind and water power. But it was still a glass ball in a city where temperatures go from -30 in January to +30 in July. The idea of passively insulating a building in a climate like this is fairly utopian – so like the city in general, Smith and Gill just ignored it.

Outside of the much-photographed central Nurzhol Boulevard, which, kitsch as it may be, is a reasonably imaginative and well-used piece of monumental planning, Astana is a wholly pedestrian-hostile city. Once widely considered to be an empty vanity project, the capital has filled up rapidly, with a population of just over a million, yet with public transport limited to a rudimentary bus service. In this weather, the assumption appears to be, what sort of idiot wouldn’t drive?

Walking anywhere outside of Nurzhol is a miserable experience, with little shelter or cover. Anyway, the buildings – from the Pharaonic diagrids of Foster’s Pyramid of Peace and Reconciliation to the Triumph Astana, a Stalinist-Gothic residential high-rise – don’t bear close examination, and are better seen from a (usually speeding) car, especially at night, when multicoloured neon lights fizz and pop. And looming over everything is the headquarters of KazMunayGaz, the state petroleum monopoly, housed in a grand arch-cum-skyscraper. Gas and petrol made this place, and they’ve also made it hard to imagine Astana without them.

There’s no reason, of course, why hypocrisy should preclude innovation

There’s no reason, of course, why hypocrisy should preclude innovation. Think of Norway, made insanely wealthy by oil, placing charging points for electric cars on every main road. But the expo had few equivalents to this.

Most pavilions, in fact, took the theme as an invitation to show off the pipelines, infrastructure and buildings of their own fossil-fuel monopolies. Many pavilions were from countries that are also outposts of the new Silk Road, a Eurasian land route from China to Europe that will purportedly see a massive programme of infrastructure and investment. And like Kazakhstan itself, where, in 2011, 14 striking oil workers in the city of Zhanoazen were shot dead by the army, they also tend to be highly repressive regimes.

So the Pavilion of Turkmenistan displayed a light-up gas pipeline alongside books by its absolute leader Gurbanguly Burdimuhamadov, Uzbekistan juxtaposed “eco-capsules” with maps of uranium and gold reserves, and Azerbaijan featured Zaha’s Hadid’s Heydar Aliyev Centre alongside an interactive oilfield you could squelch your feet on. 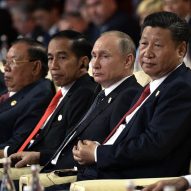 In theory, the new Silk Road – on which currently remote Astana would become a hugely important hub – would be a very energy-efficient thing, one where hugely polluting air travel could be gradually replaced with fast trains from St Pancras to Beijing. But most places on the route, as the expo made clear, mainly want to sell you some oil.

As the expo packs itself up and the performers of Cirque de Soleil and the employees of the nuclear company KazAtomProm get to go home, the non-Death Star will now be converted into a Museum of Future Energy. Yet Astana – a 21st-century fusion of Stalinist Moscow, Milton Keynes and Dubai, and a bang-up-to-date Museum of Past Energy – remains a steppe metropolis of inbuilt obsolescence.

Owen Hatherley is a critic and author, focusing on architecture, politics and culture. His books include Militant Modernism (2009), A Guide to the New Ruins of Great Britain (2010), A New Kind of Bleak: Journeys Through Urban Britain (2012) and The Ministry of Nostalgia (2016).

Photography is by Paul Raftery.

The post “Astana is a metropolis of obsolescence” appeared first on Dezeen.