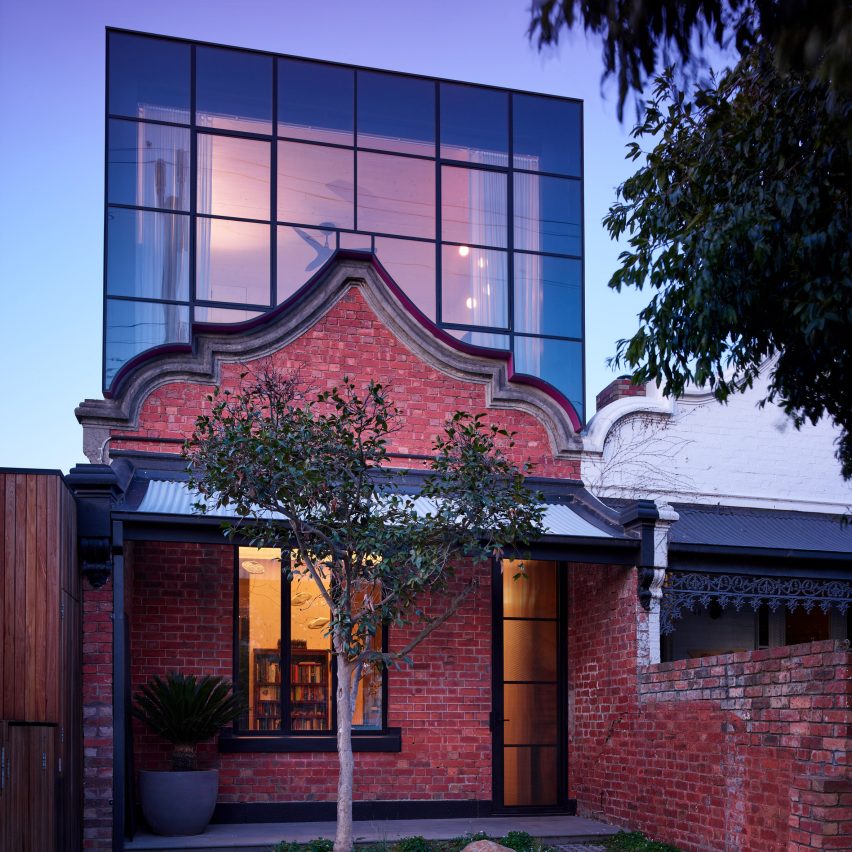 Playful accents including an indoor slide and a climbing wall fill Union House, a steel-and-glass home with an original Dutch-gabled facade designed by Austin Maynard Architects in Melbourne, Australia.

The Dutch-gabled facade is all that remains of the original home in the inner-city suburb of Brunswick, Melbourne, which has been given a steel-and-glass extension.

Recycled brick was used throughout the redesign by Austin Maynard Architects to tie the new structure to the existing facade, as the studio felt preserving the nostalgia of the original family home was imperative to the design.

The original single-fronted structure, which was no longer practical for the clients’ growing family, is now a four-storey, 285-square-metre home.  Through stacking spaces, the studio achieved a design that is more than double the size of the original build.

The studio added “a finely detailed steel and glass element that internally provides a tall ceiling and great views over the suburb and externally acts as a counterpoint to the heavy brick facade below,” it said.

“Demolishing a building and erasing history is far too easy. Union House is a place of memory, a home the family had lived in for years,” the architects expanded.

“The Dutch gable of the original home is an identical copy of its eastern neighbour. From there the similarity abruptly ends.”

The home now holds four bedrooms, three bathrooms, a study, basement and roof deck. Playful elements like a slide and climbing walls were also added to the design to “distract active boys.”

Unconventional ways of moving through the home include via a wooden slide, covered by glass panels and leading from the kitchen directly into the basement, while climbing holds and nets scatter the hallways and lead up to a green roof and deck.

By linking the spaces in unusual ways, the studio hoped to also create quieter areas.

“The linking of spaces throughout the house achieved a variety of relationships throughout, but also the ability of quiet and private areas,” Austin Maynard Architects said.

The studio wanted to create “dynamic and fun” ways for the house to engage with its occupants.

Voids, openings and sliding walls blur the volumes of the home and allow for rooms to merge into one another.

“Here, the standard house layout of cells and corridors has been subverted. There are split levels and ramps, hidden slopes, concealed steps and bookcase walls that split apart,” said the practice.

Inside the house, lime-washed cross-laminated timber stretches the height of the building, unifying the interior.

A part-perforated black steel staircase allows light to stream between the four floors of the build, while providing a dark contrast against pale walls.

The kitchen, dining and living room have an open plan arrangement and the cabinetry in the kitchen has been textured with Equitone, the same external cladding material used on the house’s exterior.

Bifold doors open out from the kitchen onto a recycled-red-brick patio that nods to the site’s history, as it reflects the materiality of the original cottage facade.

The adjoining bathroom was given a “cartoonish landscape” through a moulded-blue fibreglass unit that incorporates a shower, bath and steps.

On the house’s roof, a deck is staggered between protruding sections of the steel roofline and adjoined by a green roof garden that sits above the bedrooms, improving thermal performance.

At the rear of the home, an Equitone-clad facade, perforated shutters and a retractable awning provide shade for the social spaces and bedrooms.

Austin Maynard Architects was founded in 2002 and is led by Andrew Maynard and Mark Austin.

Other projects by Austin Maynard Architects include a zigzag roof topped extension in Melbourne and an ocean-facing “paperclip”  home in New South Wales.