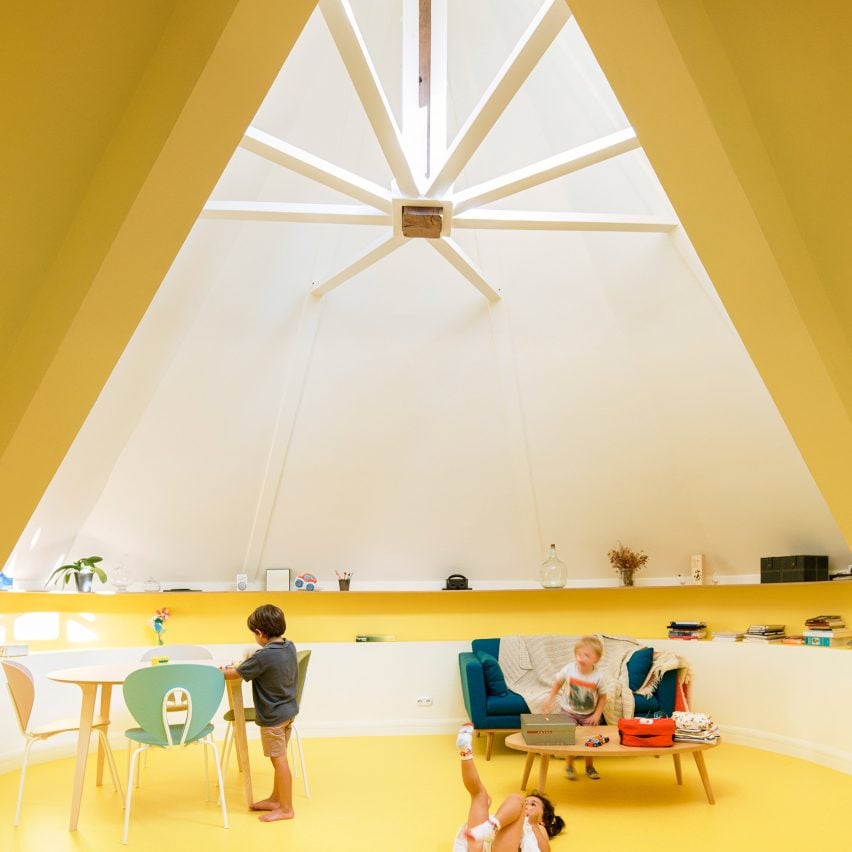 Formerly host to a series of conventional living spaces, the 100.60 Apartment has been revamped using clever storage systems and brightly coloured surfaces. 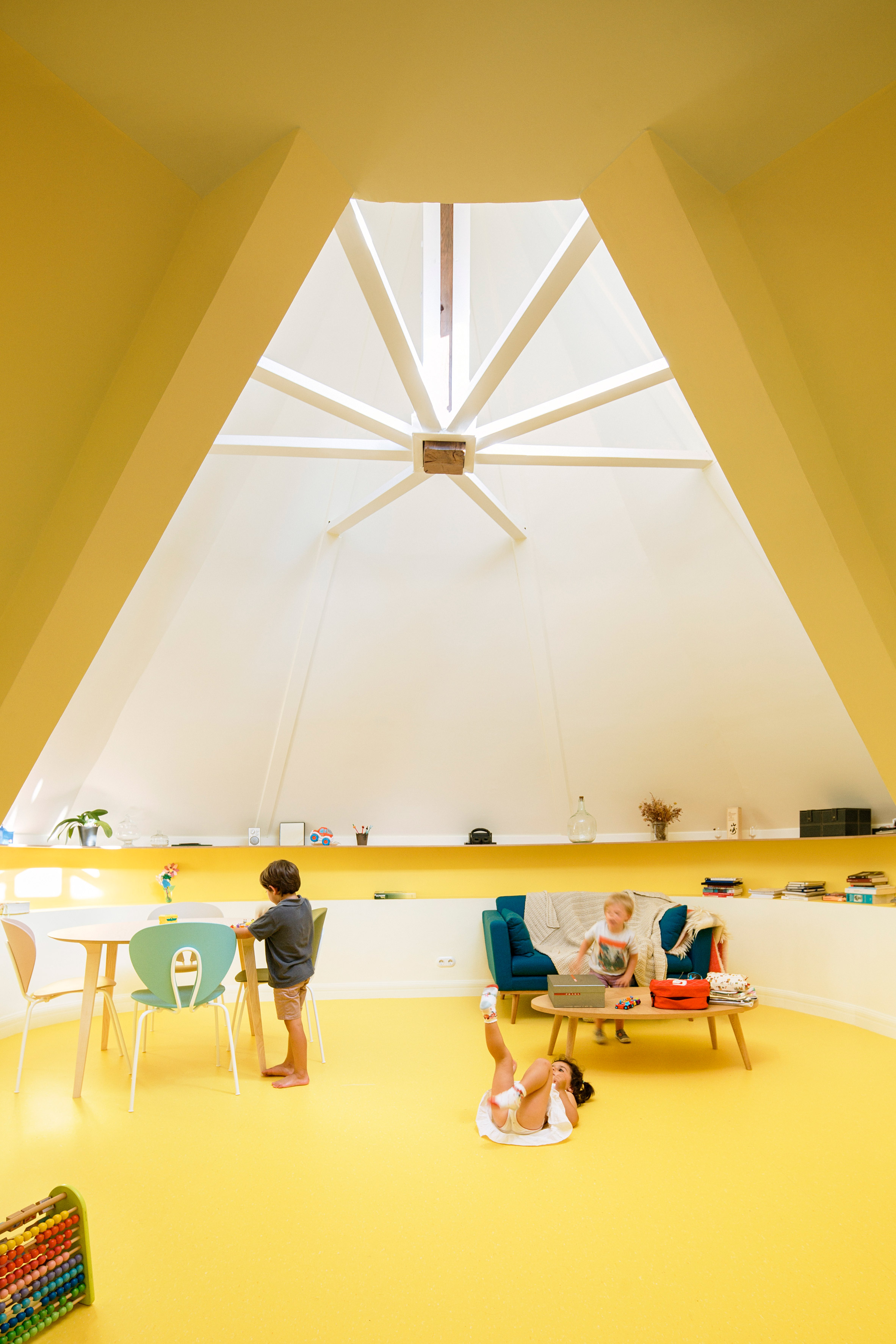 Its owners – a married couple with two young children – had initially planned to rent out the apartment to locals or tourists, but approached architecture studio Azab to transform the space into a distinctive family home.

The studio decided to knock through a number of partition walls and raise the floor level by 40 centimetres in most of the apartment, aligning it with the floor in the apartment’s main dome-like room. 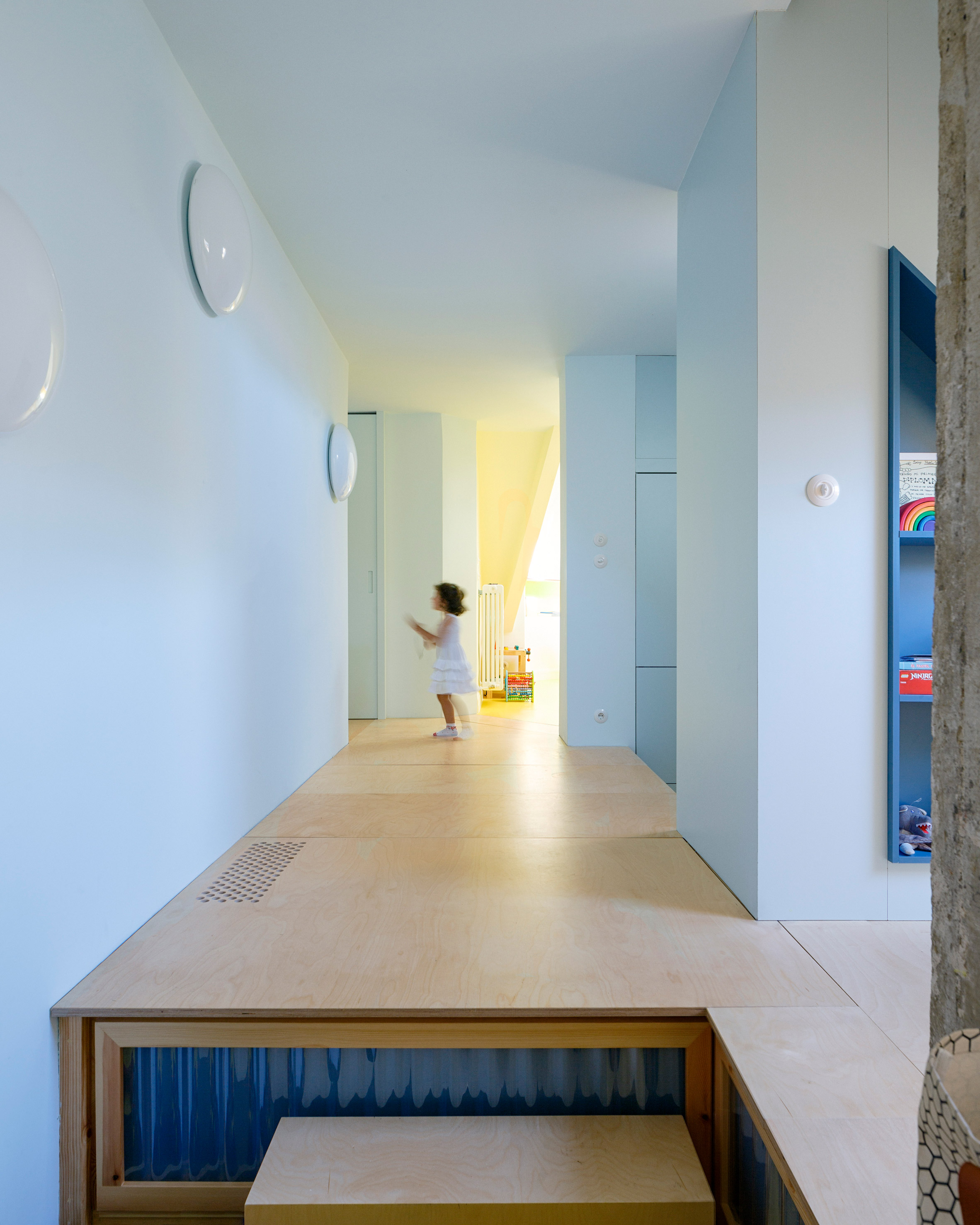 Underneath the dome’s peak now lies an open-plan living and dining space that boasts sunshine-yellow walls and flooring, boldly contrasting against the rest of the home which has been painted pale blue.

“The colour palette works in a double sense – it introduces optimism and brightness into everyday home life, and contributes to a calm mood that blurs the limits of the compressed space,” said the studio. 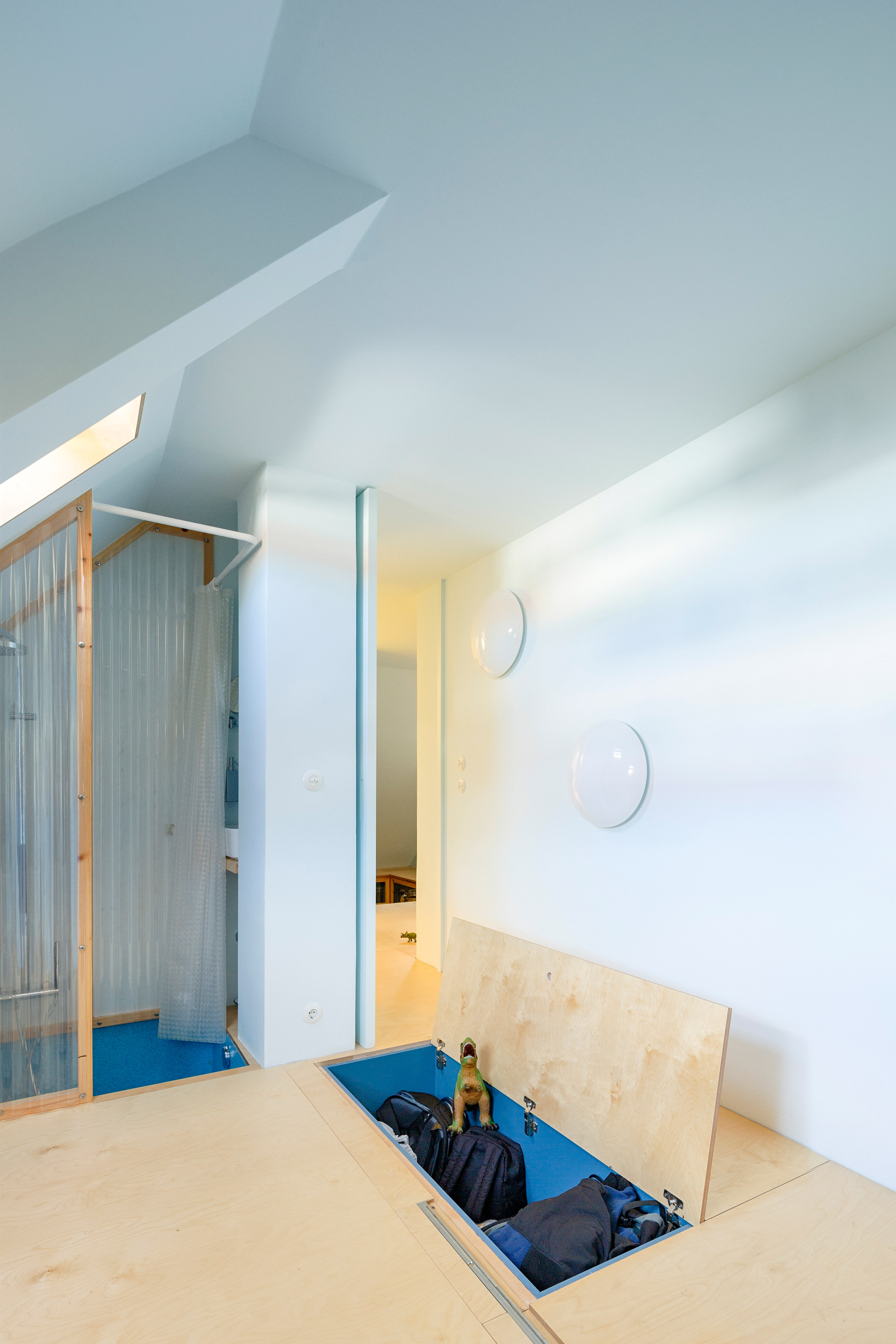 Rather than compromising space with cupboards or wardrobes, the studio has incorporated storage underneath the apartment’s timber floors for the inhabitants can keep their belongings.

Bathtubs have also been set below floor level, as well as mattresses which can be slid out when required. 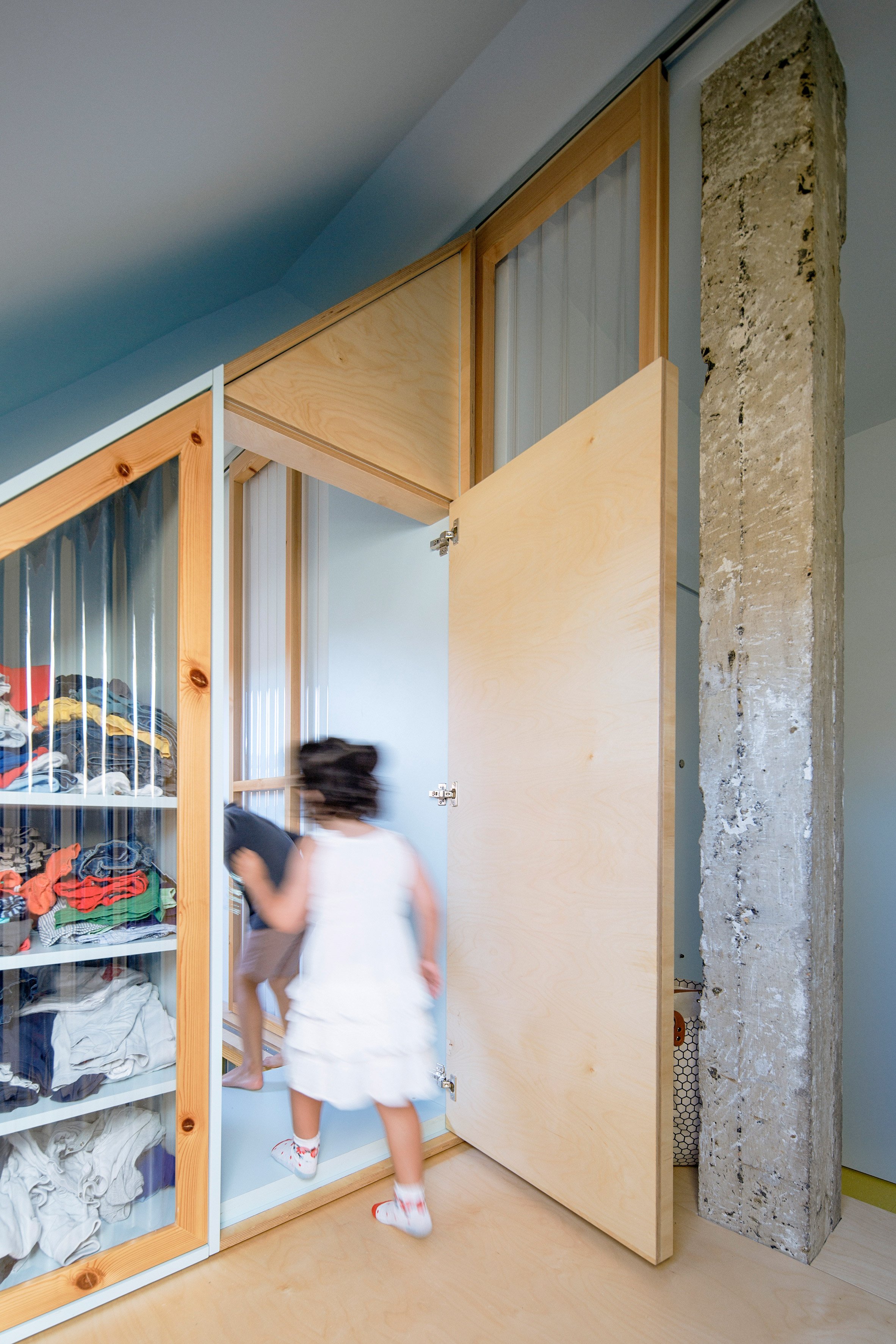 The corners of the apartment are dedicated to the children’s bedrooms. They’re closed off from the rest of the home by freestanding, triangular volumes that slot underneath the sloping roof, inbuilt with shelving fronted by corrugated plastic.

This material has also been used in wet areas of the apartment like the bathroom.

“The children who inhabit [the apartment] refer to its corners as their ‘lair’ – they have found an environment at their scale where they can have autonomy and move freely according to their own activities,” explained the studio. 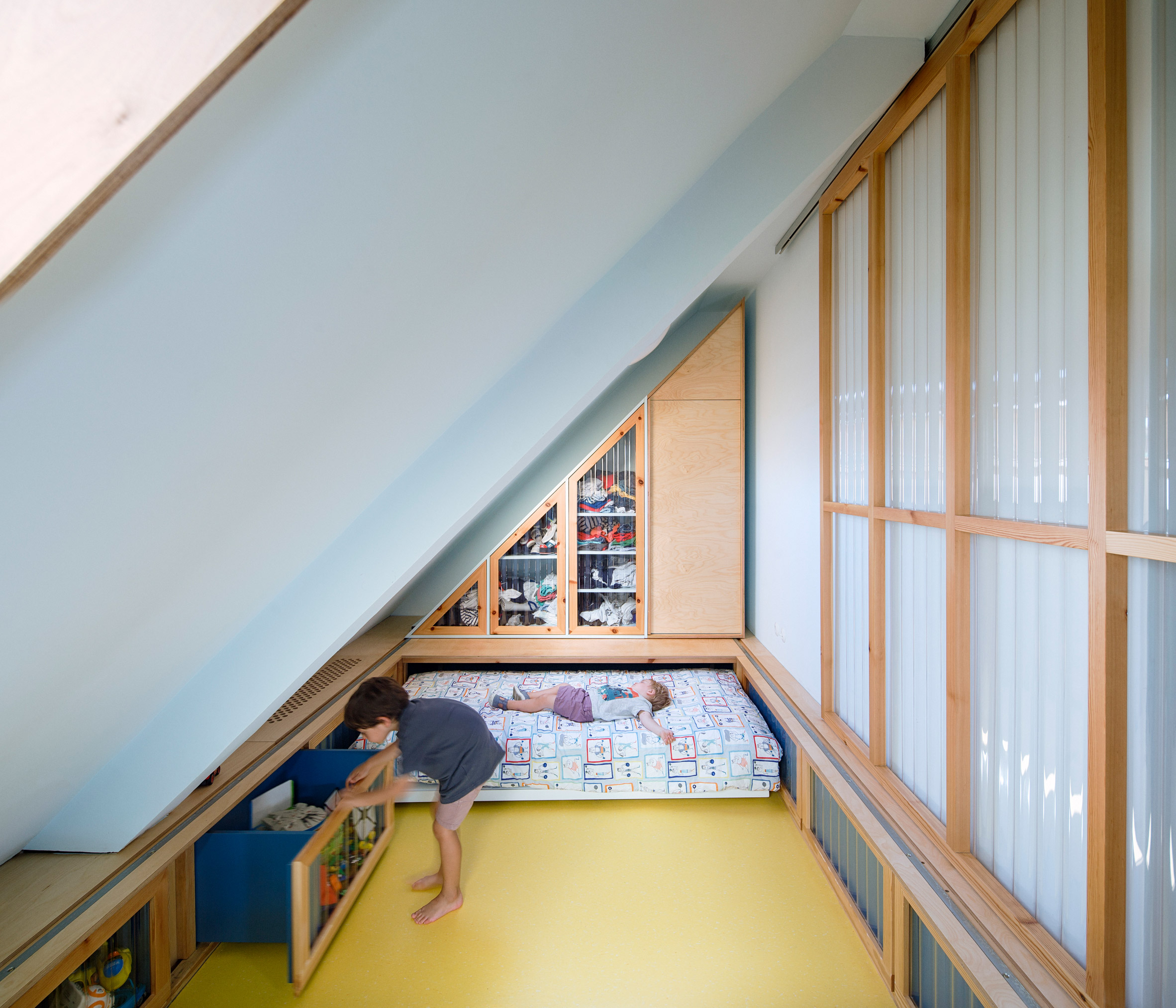 As cities across the globe become increasingly populated, architects and designers are looking for new ways to optimise space.

YLAB Arquitectos saved on square footage in a Barcelona flat by concealing kitchen appliances, worktops, and desks inside the floor-to-ceiling oak joinery which lines the home’s walls.

Tech startup Bumblebee Spaces has also developed an AI-controlled range of robotic furniture that can descend from home ceilings.

Photography is by Luis Díaz Díaz.