This compact timber-and-concrete cabin in the Norwegian village of Nerskogen incorporates large windows that angle upwards to make the most of views towards the nearby lake and mountain range. 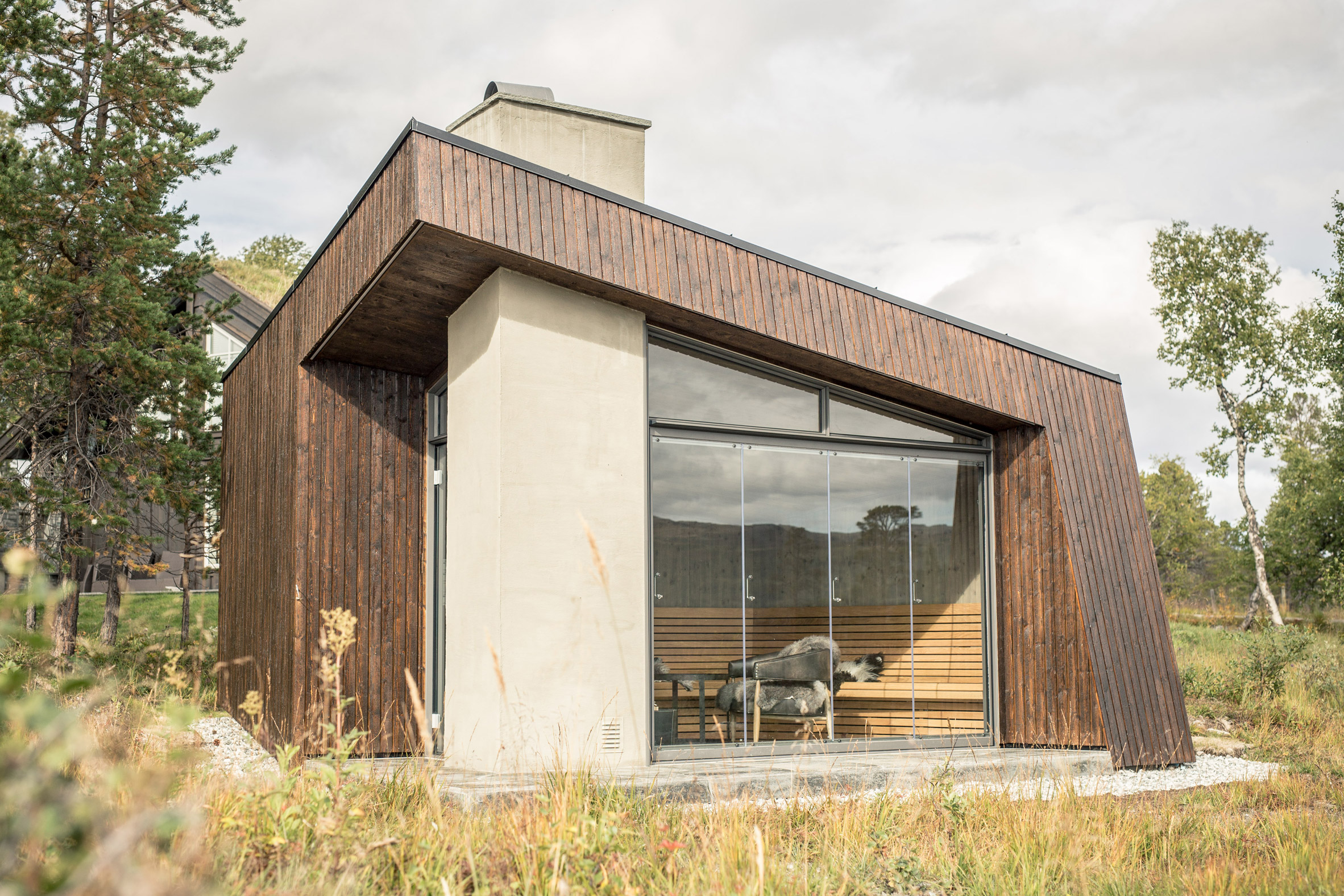 Trondheim studio Bergersen Arkitekter designed Viewpoint Granasjøen for the owner of a house that is situated close to Granasjøen lake in the Trollheimen mountain region.

The cabin is located on the edge of the existing property and provides its owner with a flexible space that can be used all year round for a variety of purposes. 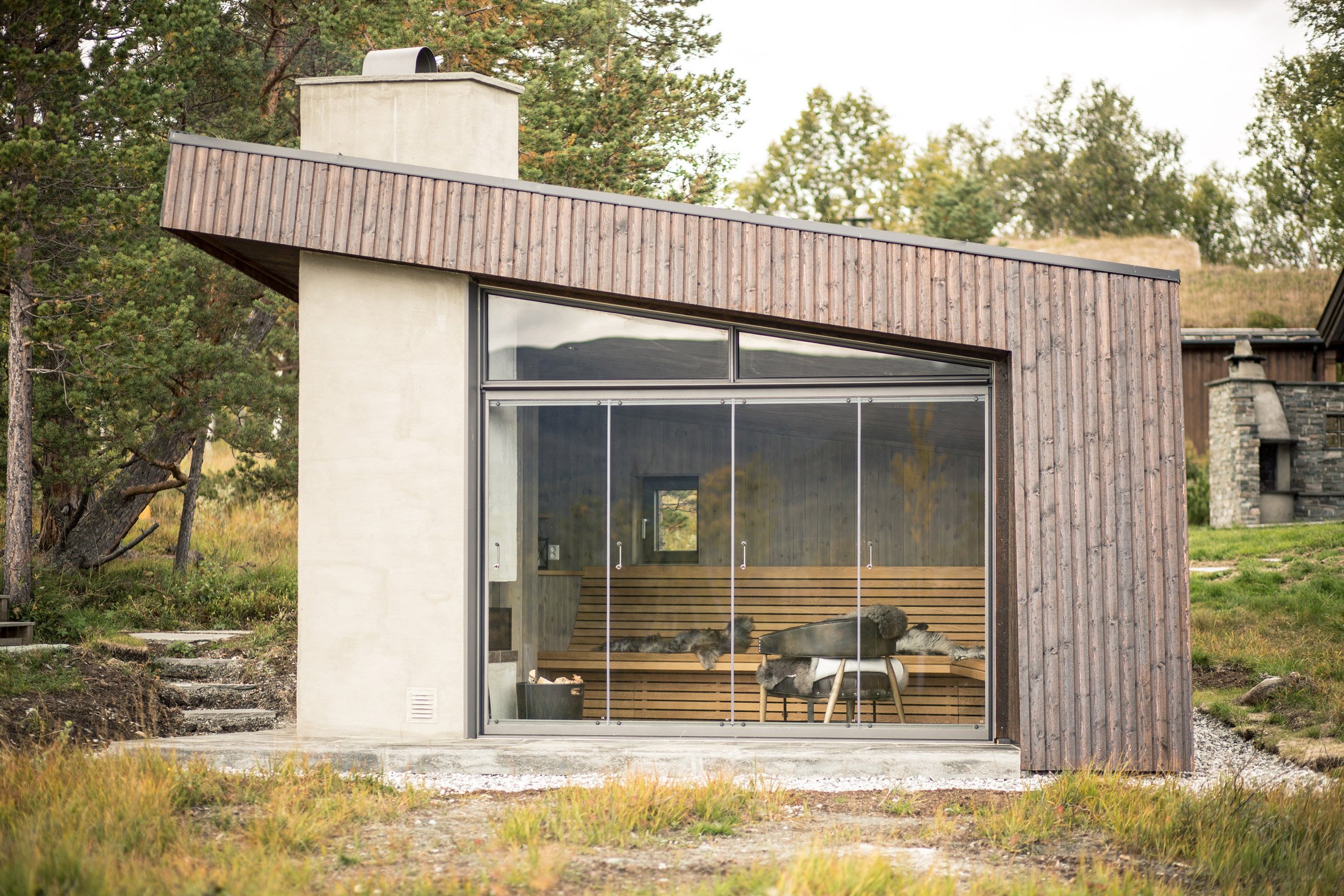 “The structure functions as both a shelter and a summer house, grill shed, bath house or just somewhere to take in the surrounding landscape, and was designed in close collaboration with the customer to suit his every need,” explained project architect Kjetil Nordø. 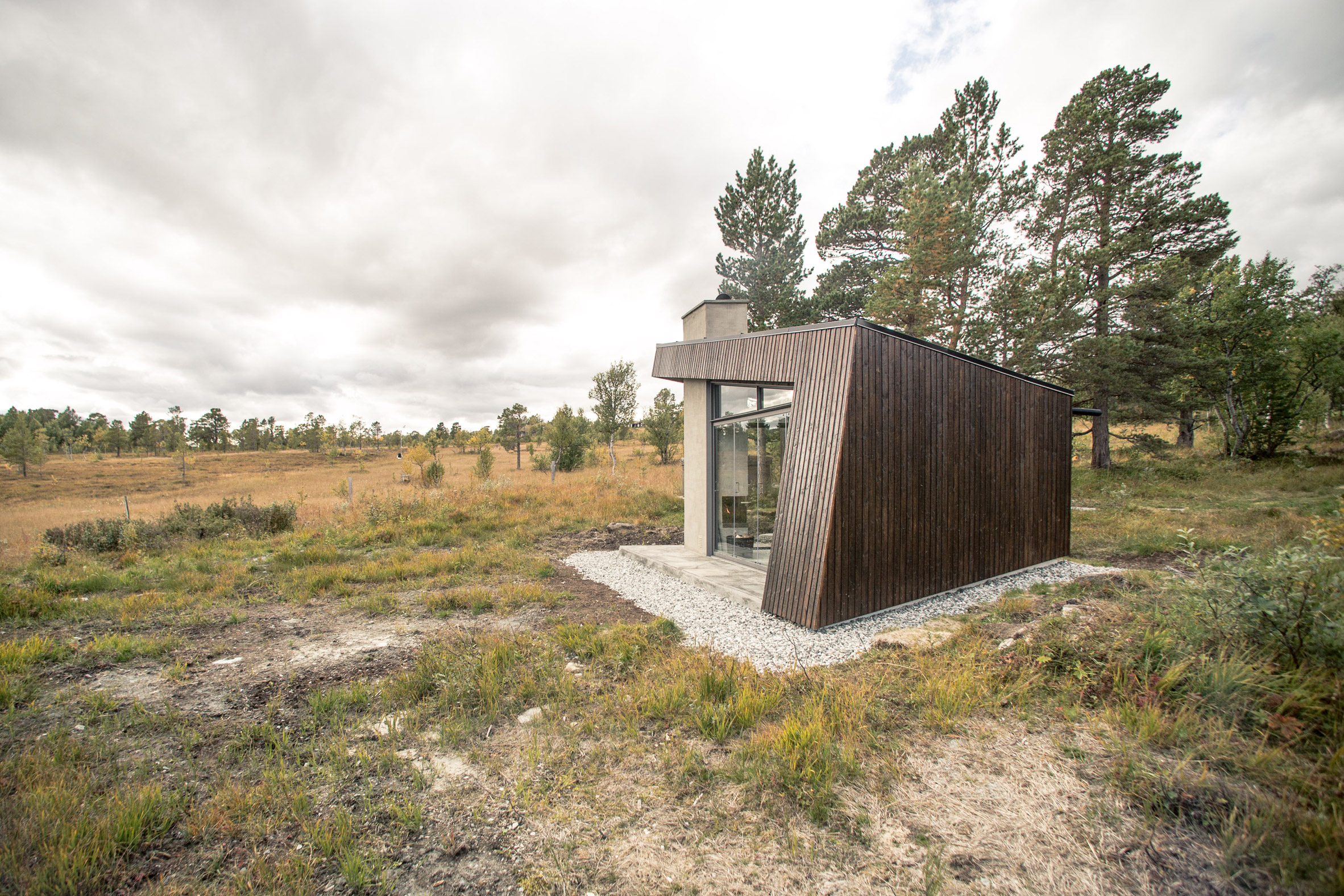 The building’s design references the traditional Norwegian gapahuk – a simple structure that can be erected easily by hikers to provide shelter from harsh weather.

Typical gapahuks feature two posts with a horizontal log laid on top to create a frame. A layer of branches leans against the frame to form a sloping roof and leave the front open.

The traditional mountain hut also influenced a prefabricated cabin designed by Snøhetta as a readymade retreat, as well as a pine-clad cabin overlooking a lake that architect Danielson Aarhus designed for his family. 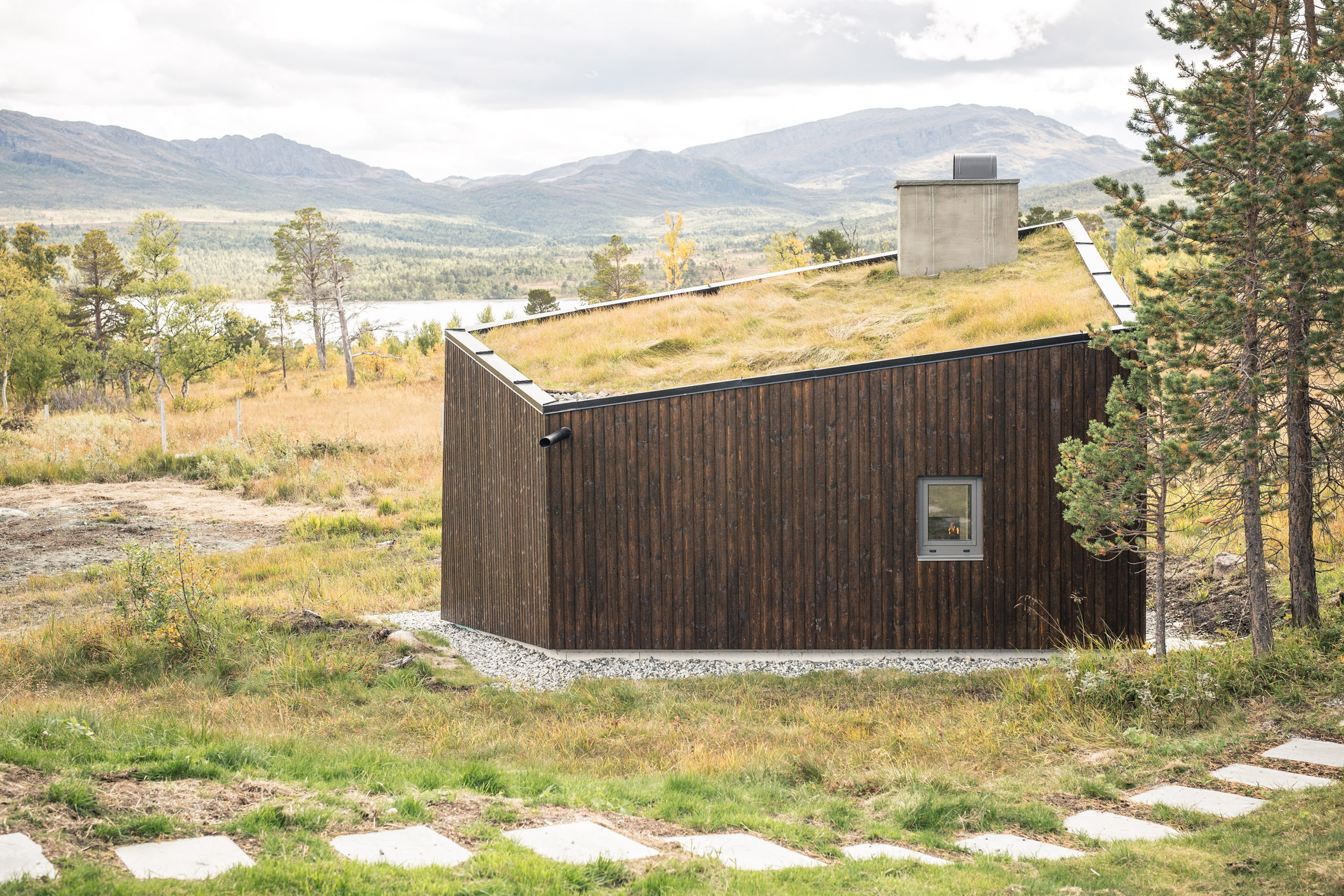 Bergersen Arkitekter’s building features an angular plan and slanted surfaces that complement the gabled form of the existing building. Its dark-brown stained-timber cladding also matches the material used for the house’s exterior.

The structure’s sloping roof is lowered on the side closest to the main house and rises up on the side facing the landscape. Like the house’s roof, it is covered with turf to help it blend in with its natural surroundings. 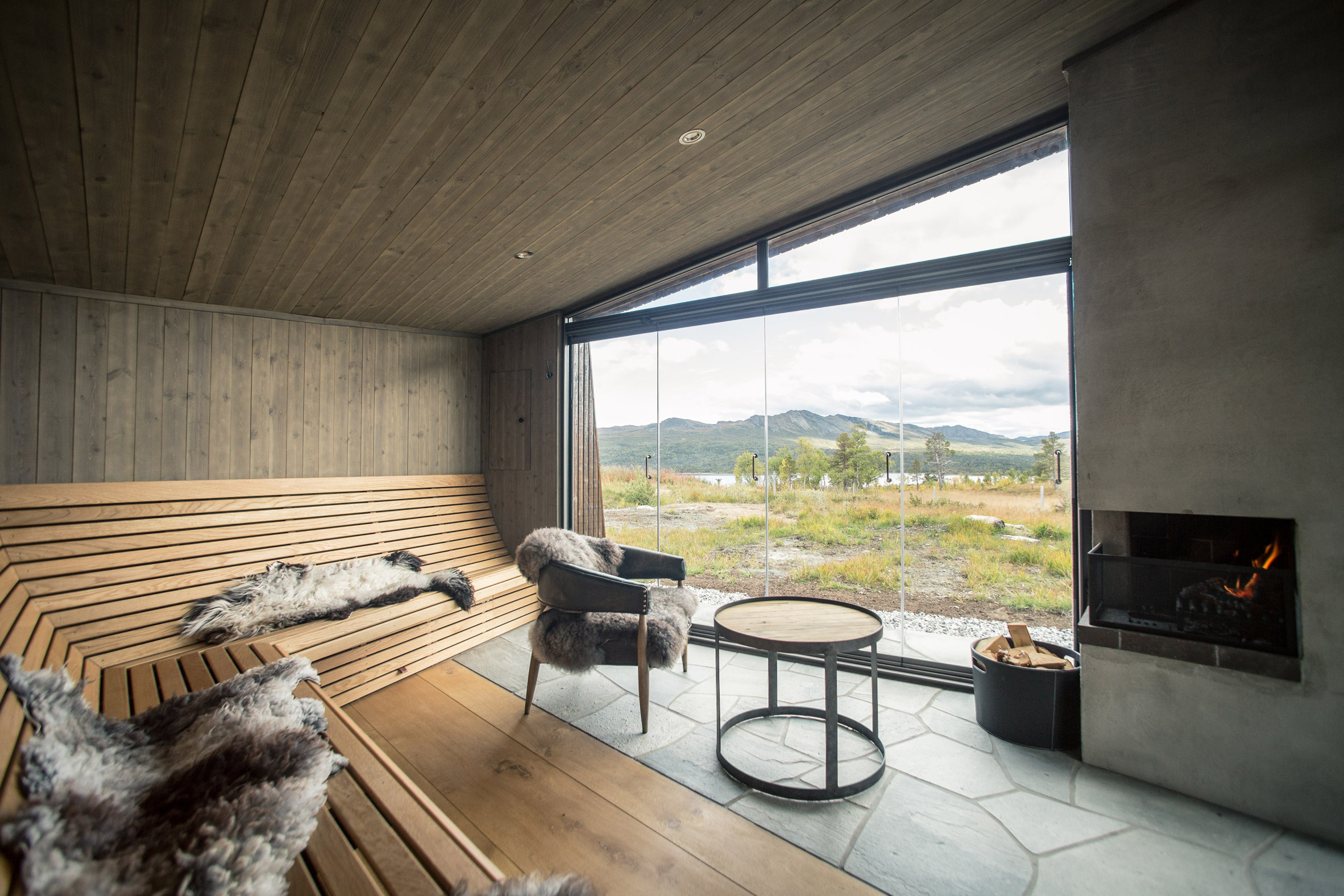 The two edges that face the view incorporate large glazed surfaces set back beneath the roof. One side offers a glazed entrance door, while a row of doors lining the longer facade can pivot and slide to open the space up to the outdoors.

A concrete chimney extends up through the roof of the building’s highest corner. The open hearth at its base is used to heat the compact space. 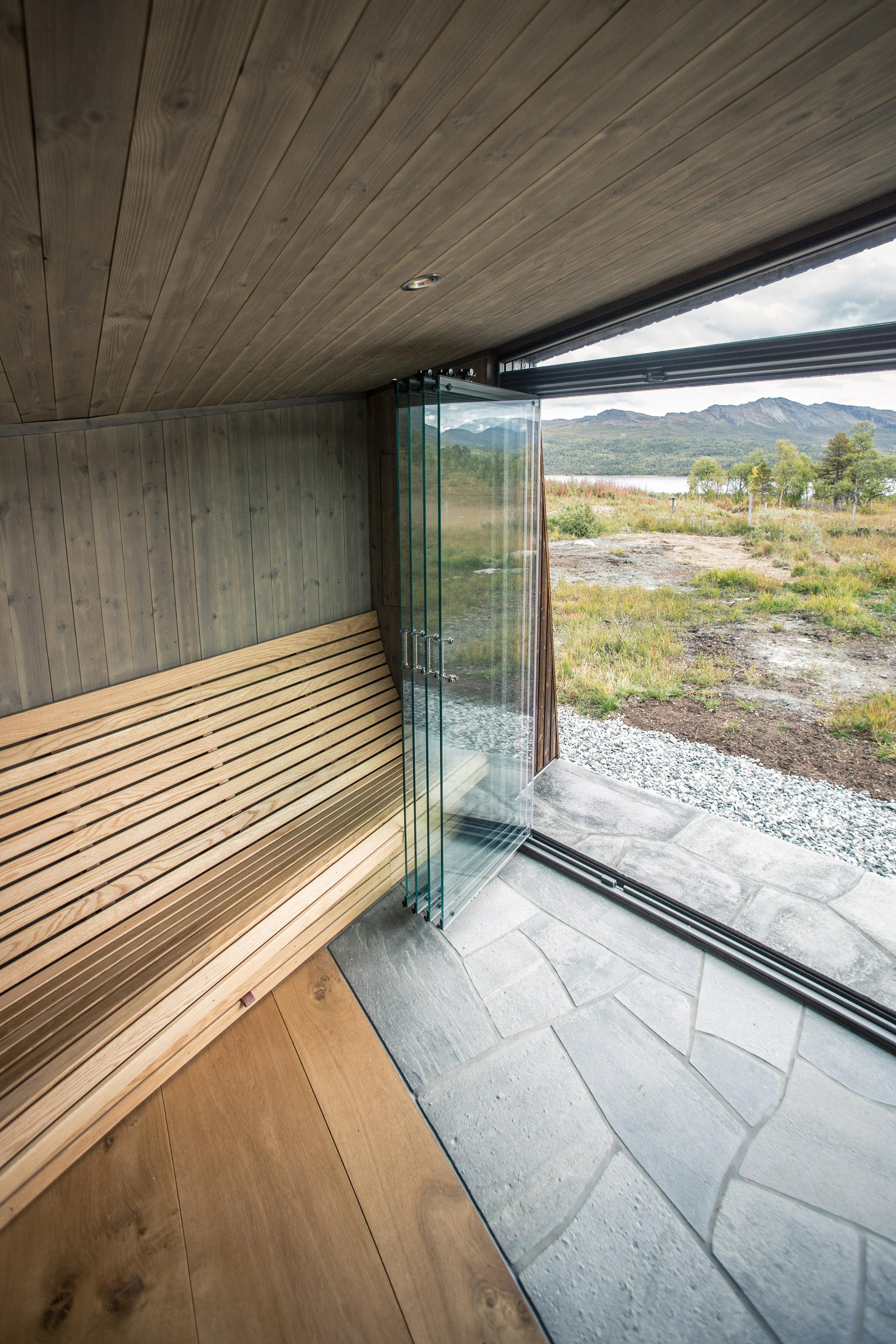 A custom-made slatted-timber bench wraps around two sides of the room and provides seating that looks out through the large openings towards the mountains and lake.

Wood used to line the walls, ceiling and part of the floor creates a cosy and warm interior environment. The rest of the floor is laid with flagstones that extend onto a small terrace, creating a seamless transition from indoors to outdoors.

Photography is by Kjetil Nordø. 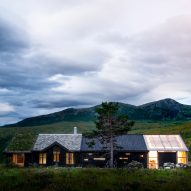 The post Bergersen Arkitekter’s Viewpoint Granasjøen is an angular lakeside cabin with a turfed roof appeared first on Dezeen.