Architecture studio Bergmeisterwolf has applied vernacular log cladding to this group of holiday apartments, which extend around a courtyard in the Italian alps. 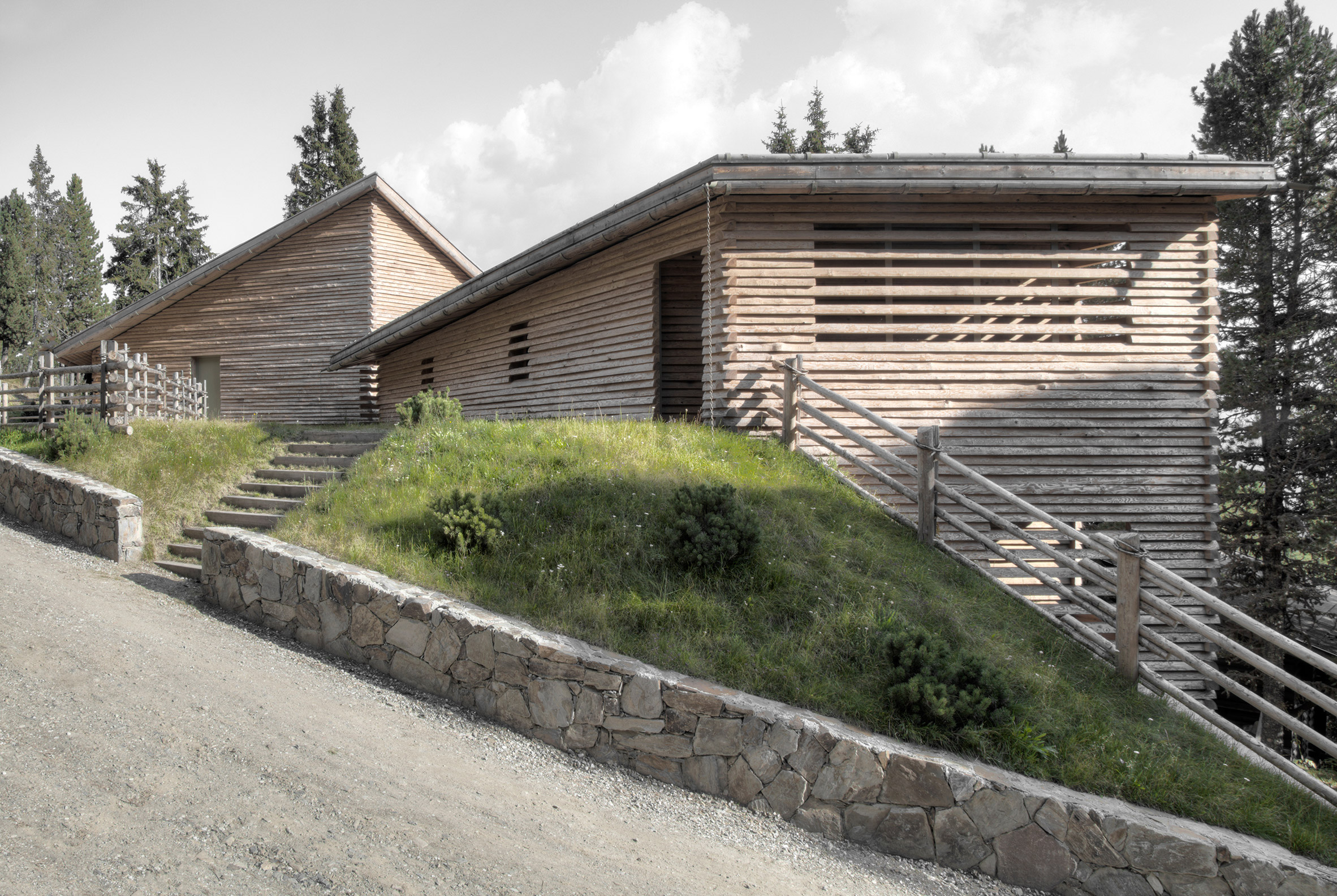 Contained within angular volumes, the Twisted House apartments were designed for a hillside site in South Tyrol, close to Bergmeisterwolf‘s studio in the town of Brixen.

Five accommodation units are contained within a structure erected on top of a traditional stone-clad basement level that houses a shared garage. 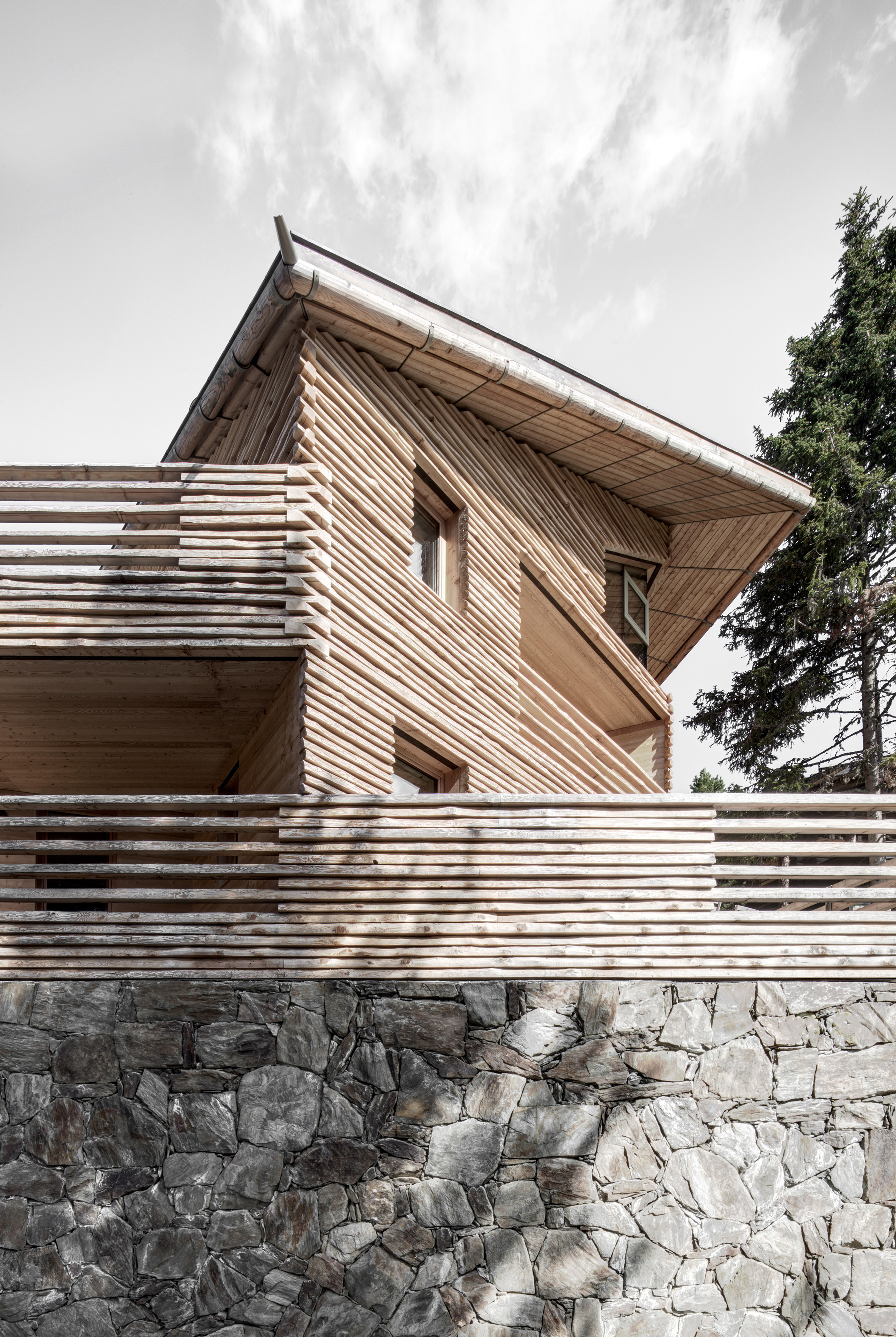 Built around a central courtyard, the apartments are distributed across the upper levels of the building, which is divided into separate volumes.

The sloping site informed a design that follows the topography of the hillside and seeks to merge with the surroundings through its angled forms and roofs covered with local plants. 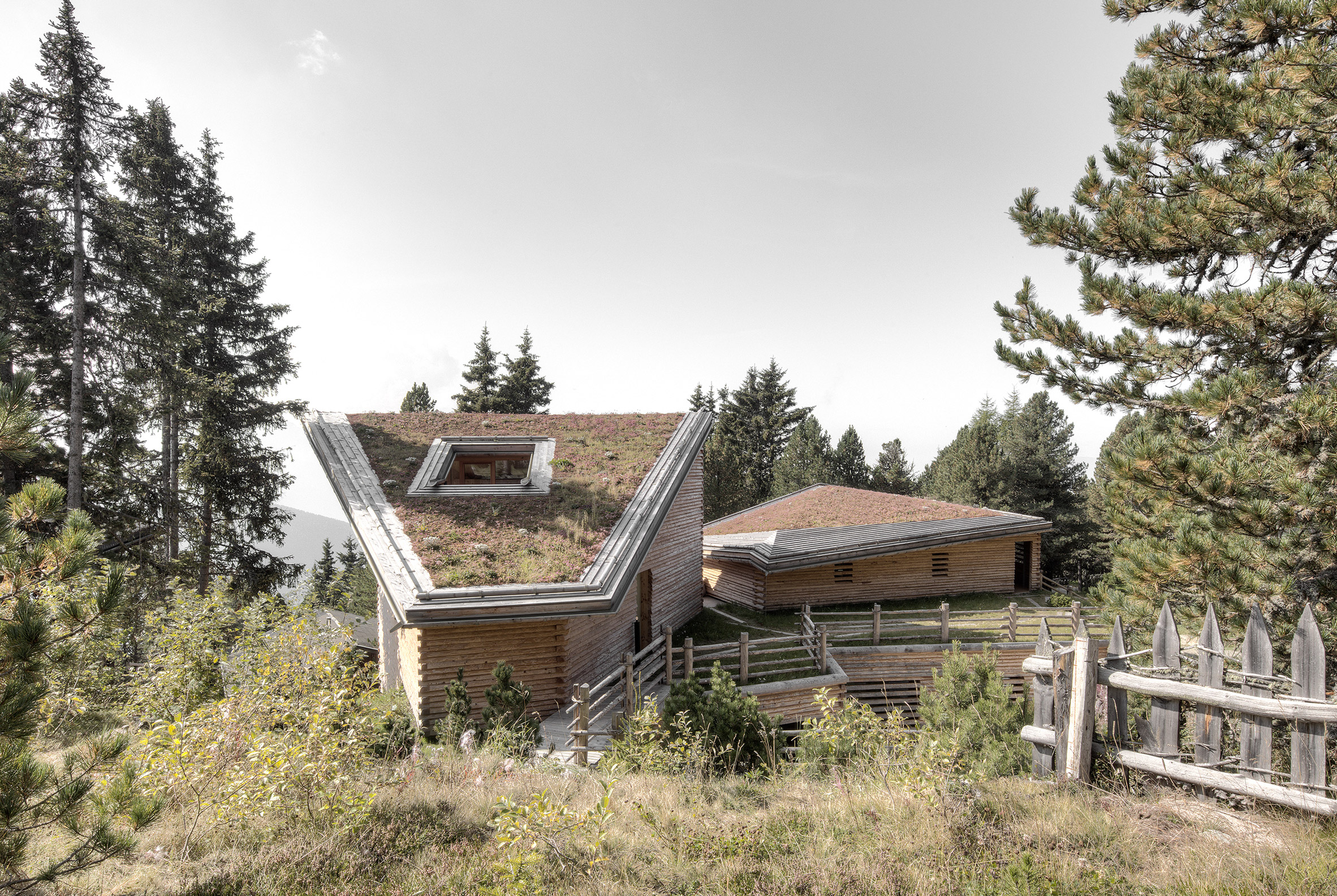 “The roofs of each unit have different shapes that blend with the landscape, remodelling and completing it,” said architects Gerd Bergmeister and Michaela Wolf.

“The challenge is to find new proportions and relations with the existing, becoming part of the context and contributing with the construction of the place.” 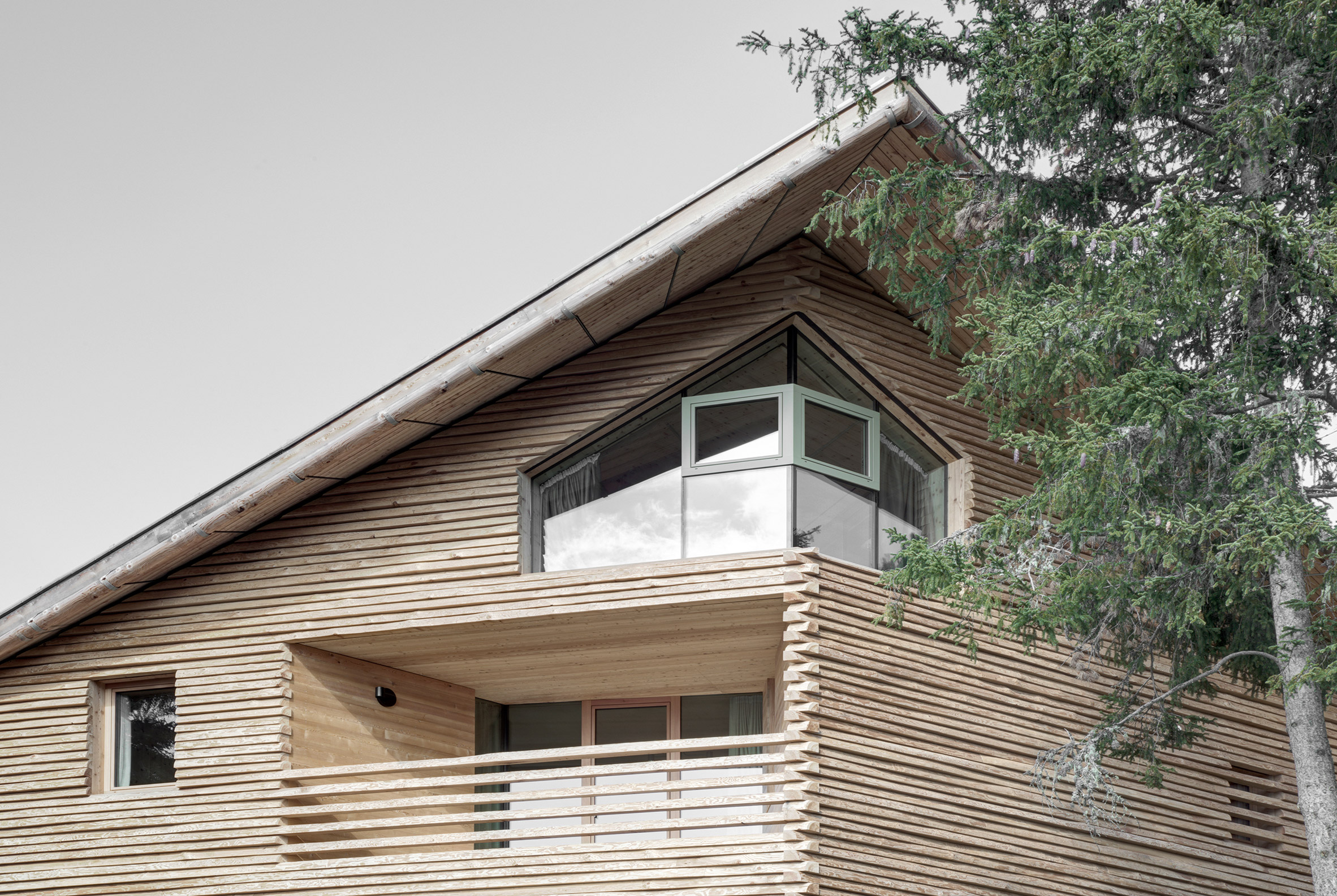 Each of the facades is formed of logs that are quartered and interlocked at the corners in a reference to the local vernacular of alpine cabin building.

The logs also form brise soleil, providing shade in front of the windows and openings, as well as creating balustrades for balconies that look out towards the mountains. 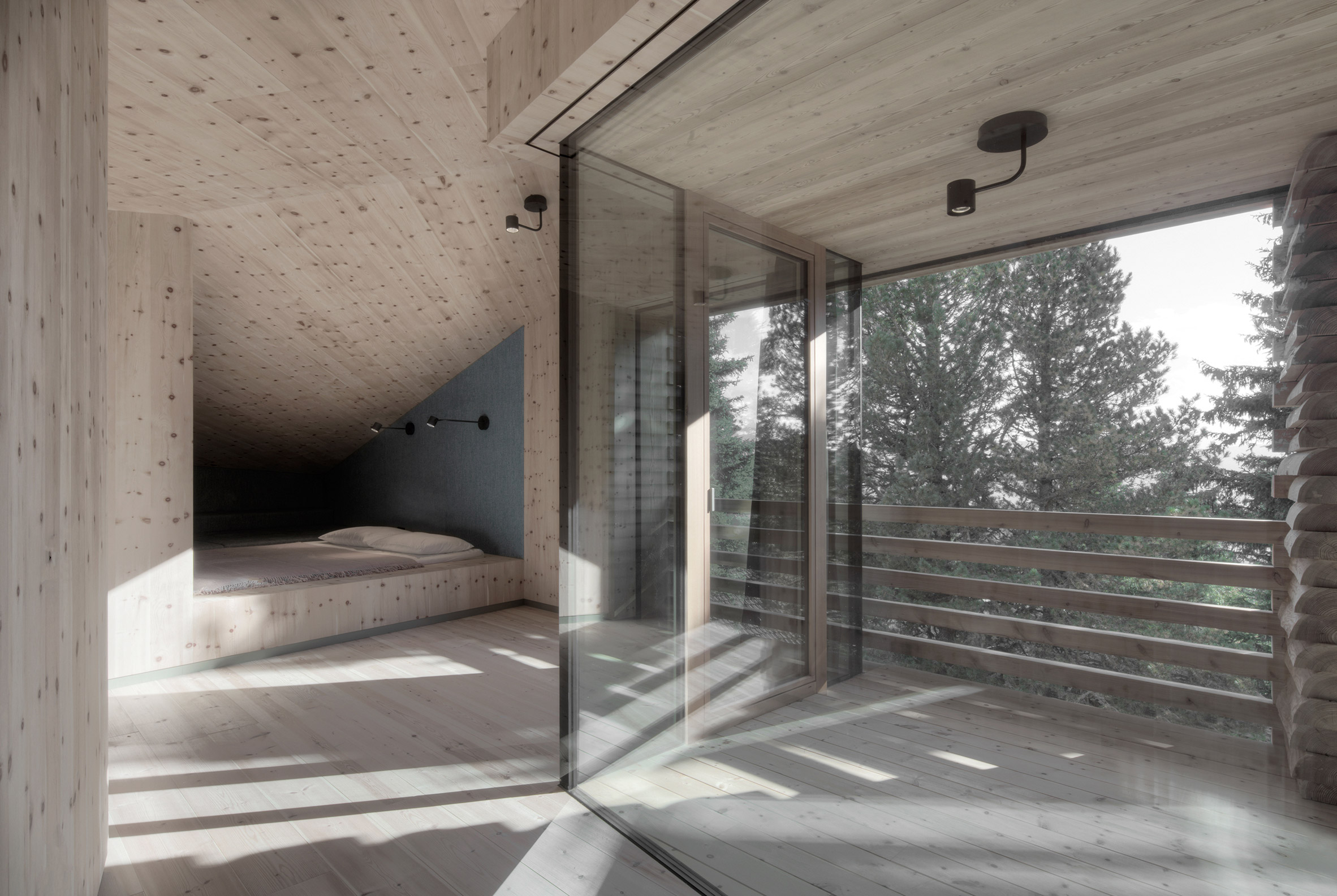 The front of the building faces the street and has views of the valley, while a sheltered courtyard garden at the rear connects the interior spaces with the surrounding nature.

Knotted wooden boards applied throughout the interior help to reinforce the log-cabin aesthetic and the traditional, natural material palette. The angular floorplan results in varied configurations for the different apartments. Fitted furniture, including beds and casual seating areas, are accommodated within corners and nooks.

The log brise soleil cast linear patterns of light and shadow into the rooms, which alter throughout the day and with the changing seasons. Farmstead Next to the Chapel by bergmeisterwolf

Bergmeisterwolf’s previous projects in the area include a holiday home in a converted farmstead that features an enormous steel window frame set into a reconstructed stone wall.

Photography is by Gustav Willeit.