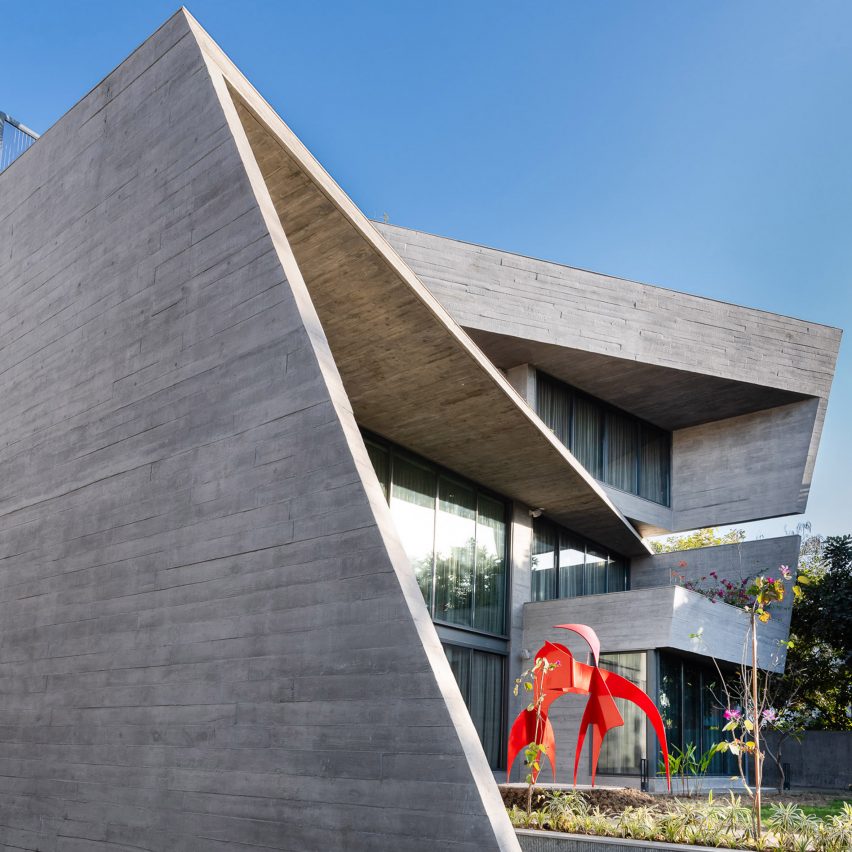 The Grid Architects created Beton Brut house for an entrepreneur whose family enjoys creative pursuits. The client wanted a home that would provide spaces for family gatherings and for individual activities.

Located on a southwest-facing plot, the house’s form was driven by the need to protect interior spaces from the region’s harsh heat and sunlight.

The studio used the image of an Indian woman protecting her head and face from the sun with the drapes of a traditional sari as a reference when creating the building’s folded forms.

Rather than designing a rectilinear box, the structure was separated into staggered layers with some sections removed to create a series of cantilevers that lighten the overall aesthetic.

The choice of concrete as the main construction material also influenced the shape and style of the house, which evokes brutalist buildings from the latter half of the 20th century.

“With the decision of creating a pure structure that respected honesty of materiality, the architectural path was determined as a brutalist one,” the studio explained, “typified by bare concrete, geometric shapes, a monochrome palette and a monolithic appearance.”

To mitigate the heavy, manmade concrete surfaces that are left exposed internally and externally, the interiors feature traditional Indian decorative elements along with plenty of upholstered furniture and soft fabrics. 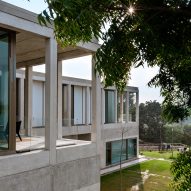 “Incorporating ‘brutal’ in social housing ideals and traditional Indian typologies results in, what we call, ‘neo-brutalism’,” the firm added.

“This is why while Beton Brut – raw concrete in French – may appear strong and assertive, it possesses a soft, emotive, heart.”

The building’s entrance is sheltered beneath one of the cantilevered roofs. A three-metre-tall door leads into a passage that culminates in an opening looking onto a rear terrace where a patinated artwork is hung on a concrete wall.

The main living areas are positioned to the right of the corridor and are arranged around a central landscaped courtyard.

The formal lounge and a dining room are positioned on either side of the garden. The main bedroom is accommodated deeper into the house and looks out onto the garden.

Utility spaces including wet and dry kitchens and a pantry are tucked away in a corner of the building, while further bedrooms with ensuite facilities are situated on the upper floors.

Artefacts, furniture and art works distributed throughout the home soften the appearance and inject personality into the spaces. These include reclaimed panels and brackets from traditional buildings such as haveli houses and mandapa pavilions.

In the double-height living space, a wooden jharokha window that would originally have projected from the exterior of a building is mounted on the wall and offers a glimpse into the space from one of the first-floor bedrooms.

Ahmedabad-based The Grid Architects was previously longlisted for the Dezeen Awards in the studio of the year category.

The photography is by Photographix.

The post Beton Brut is a "neo-brutalist" concrete house in Ahmedabad appeared first on Dezeen.