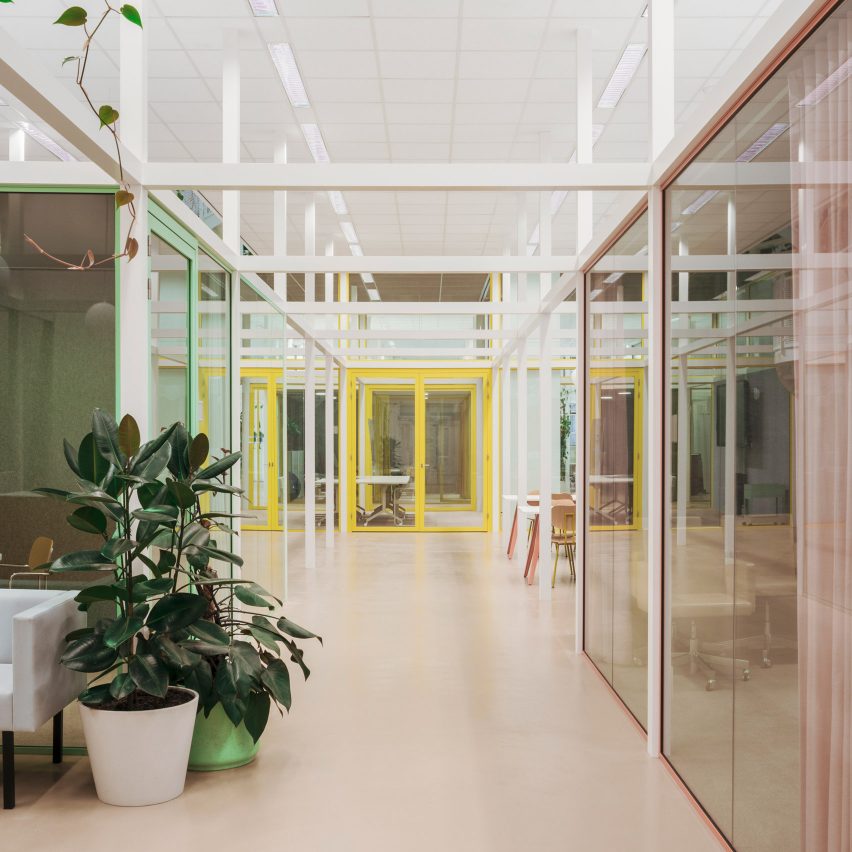 Beyond Space has created a flexible office interior for a security company in Amsterdam using a colourful grid system that allows the user to change the layout when needed.

Informed by an endless repeating grid system, the studio used a structure made from beams and columns to knit together two office floors.

The rigid grid was constructed from aluminium to create a structural framework that gives the client the freedom to organise and reconfigure the space within it, by dismantling and moving walls as needed.

“Should the nature or ambitions of the company change, the grid offers flexibility. Walls can easily be dismantled and rebuilt on another point in the grid,” Beyond Space said.

Multicoloured trimmed doors and windows create privacy for workspaces and contrast against the rigid white framework. The studio also hoped the colour would emphasise the flexibility of the space.

“We wanted to put the emphasis on the fact that these doors and windows are infills in the grid and by making them a contrasting colour, the difference between the grid and the infills becomes clear,” Beyond Space cofounder Stijn de Weerd told Dezeen.

Painted concrete serves as a base for the office floor, while zoned areas and infill rooms were made from a wide range of materials including coloured MDF, corrugated sheets and fabrics.

Carpets in meetings rooms and felt contouring against corrugated-metal walls add texture and softness to the otherwise rigid theme.

“The corrugated metal, coloured MDF, felt, solid surface and carpet were chosen to create a diverse palette of different colours and rich textures which don’t remind you of a typical office,” said de Weerd.

Plants have been spread out throughout the space and add an organic feel to the aluminium grid.

A white perforated spiral staircase centres the space and links the two levels of the office.

Pastel-hued furnishings provide a contrast against the white grid and fixtures, as the studio said it was important to maintain a balanced feel.

“We wanted to combine the apparently opposite: strict but playful, cosy as well as radical,” said de Weerd.

Beyond Space was launched in 2020 by Remi Versteeg and de Weerd, who had previously founded Space Encounters, and works across art, architecture and product design.

Among the architects’ projects at Space Encounters are a tile-clad office building on stilts above a brick warehouse and also and office interior which uses soft partitions to divide space.

Photography is by Lorenzo Zandri.