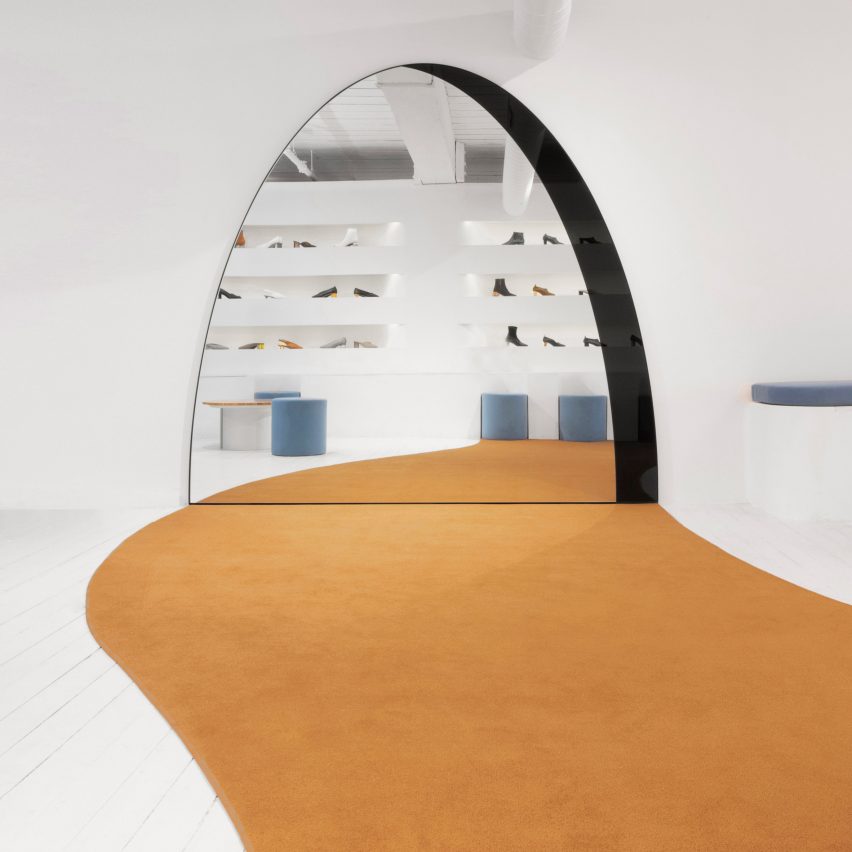 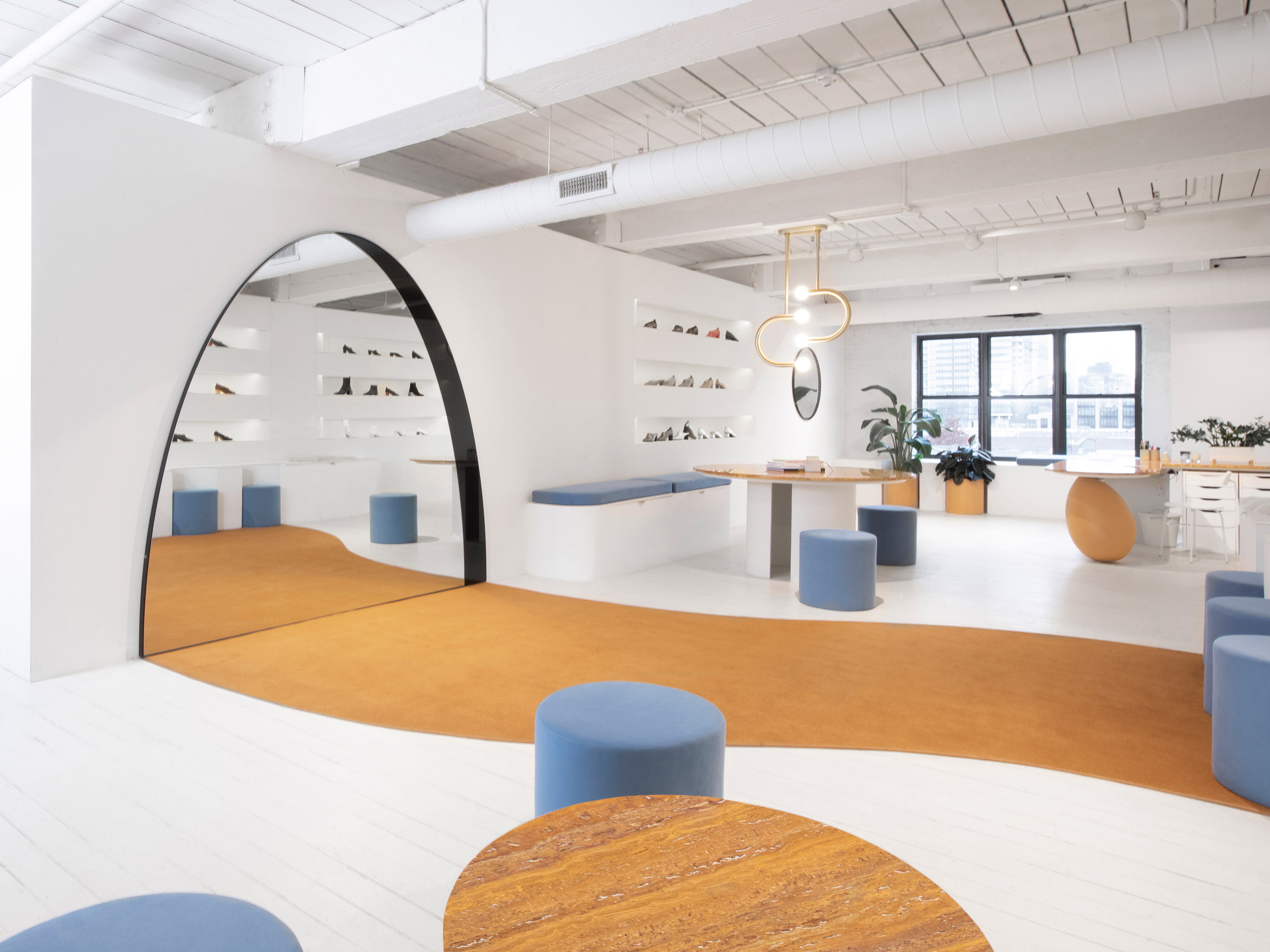 Bower Studios designed the 2,000-square-foot (186-square-metre) space in the Greenpoint neighbourhood to provide a large appointment-only location showroom, and a studio for the design and operations of the women’s shoe label. 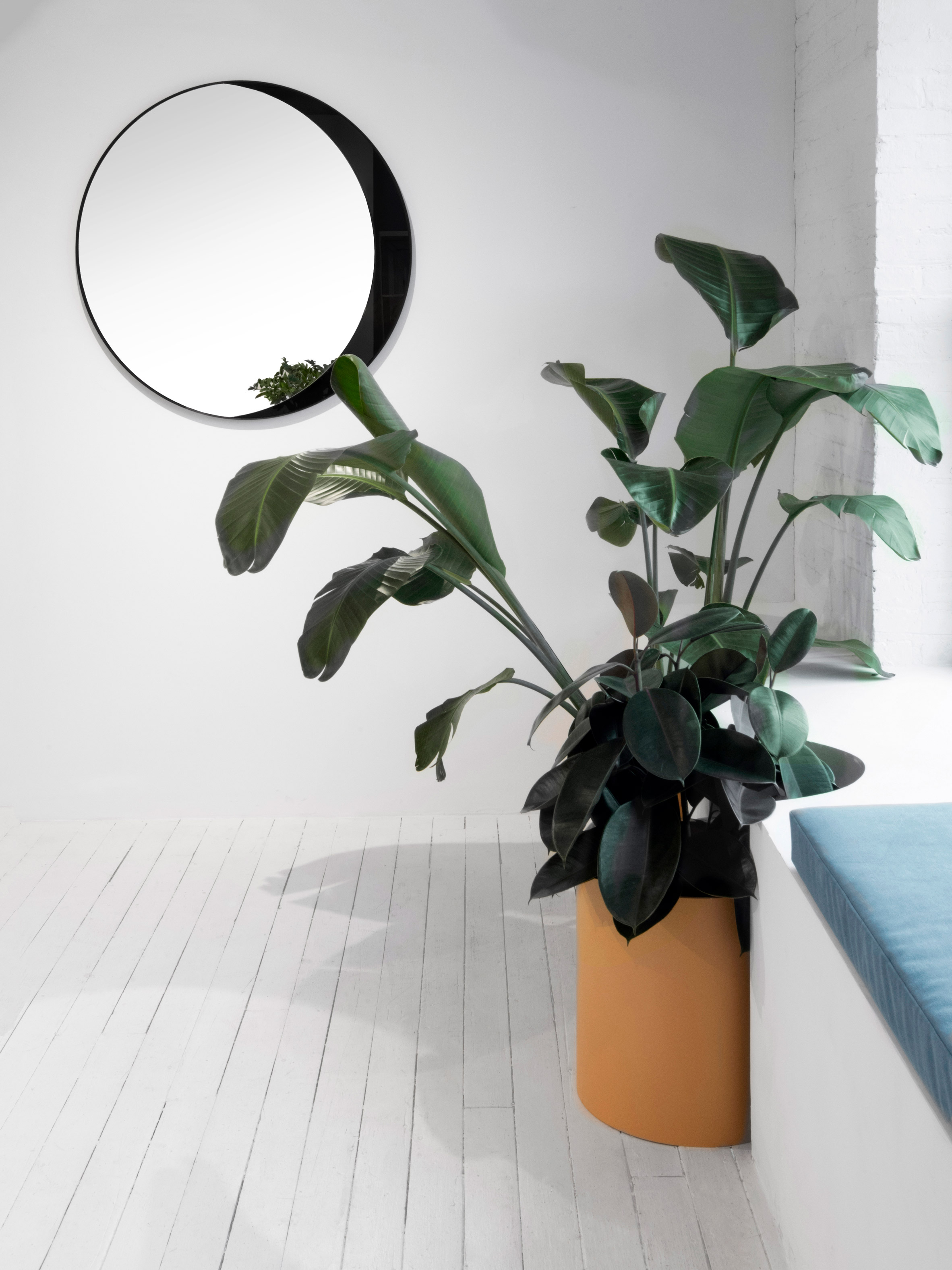 Exposed wooden ceilings and flooring, and walls in the showroom are painted white and offset by pops of dusty-blue and orange details furnishings – all of which are designed by Bower Studios. 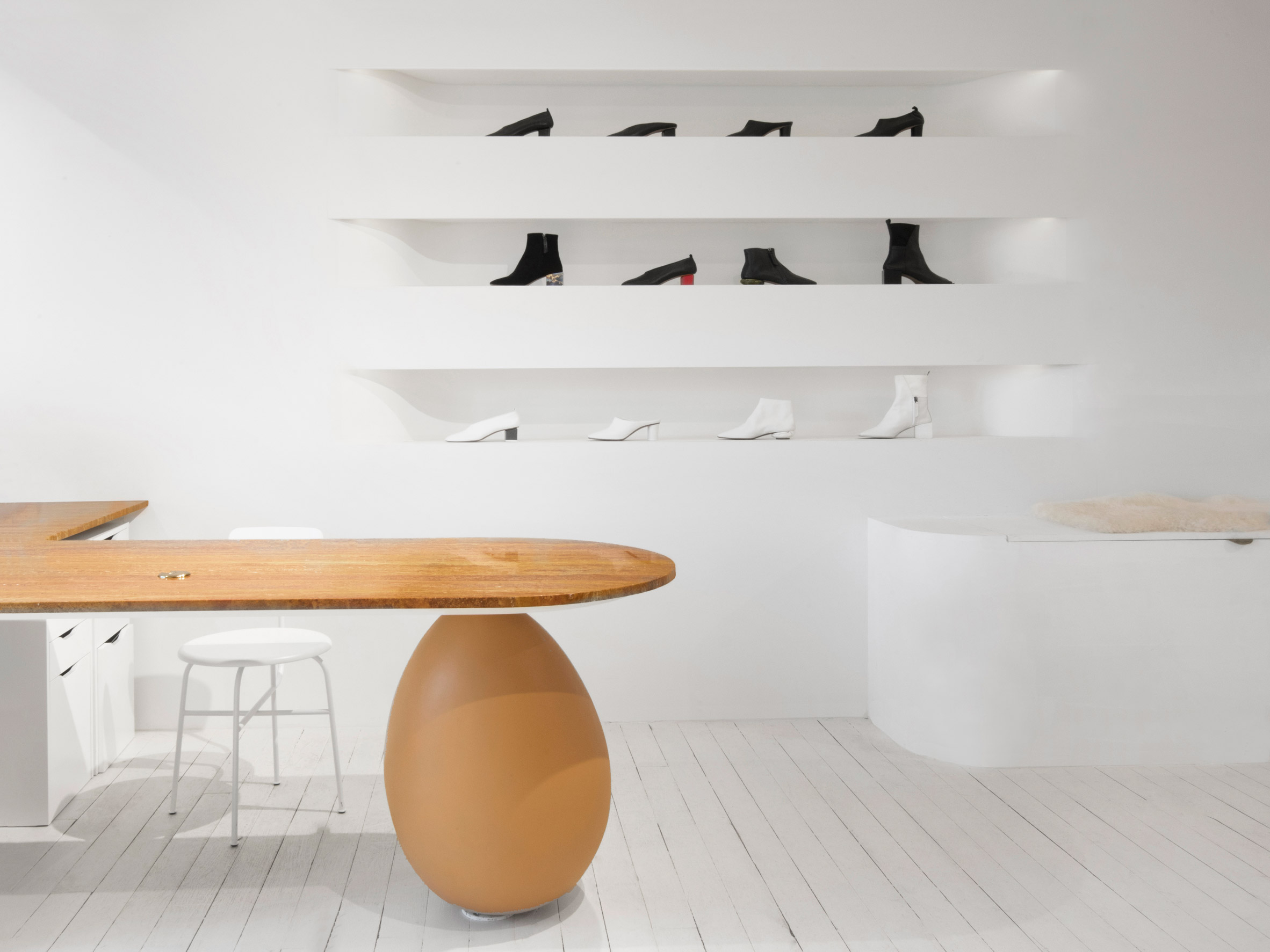 A prominent element is a large arched mirror, detailed with a curved black edge to make it look like a doorway. It reflects a curved orange carpet, which runs along the floor to meet it, and the surrounding white space to give the false impression of an additional room. 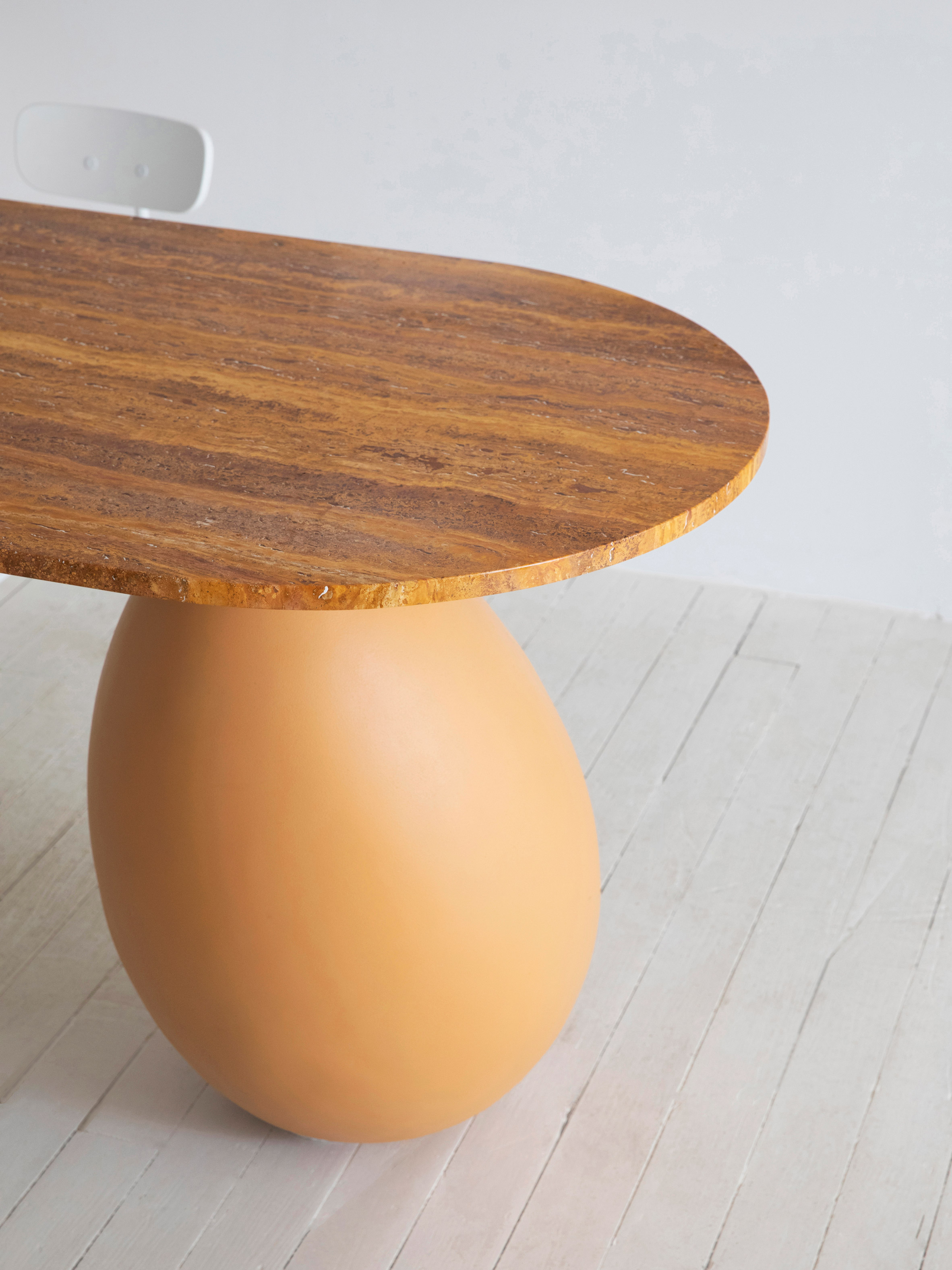 “Used in conjunction with the flowy, organically-shaped runway carpet, the mirror gives the dramatic illusion of an opening into an expansive, adjacent showroom space,” said Bower Studios in a project description. 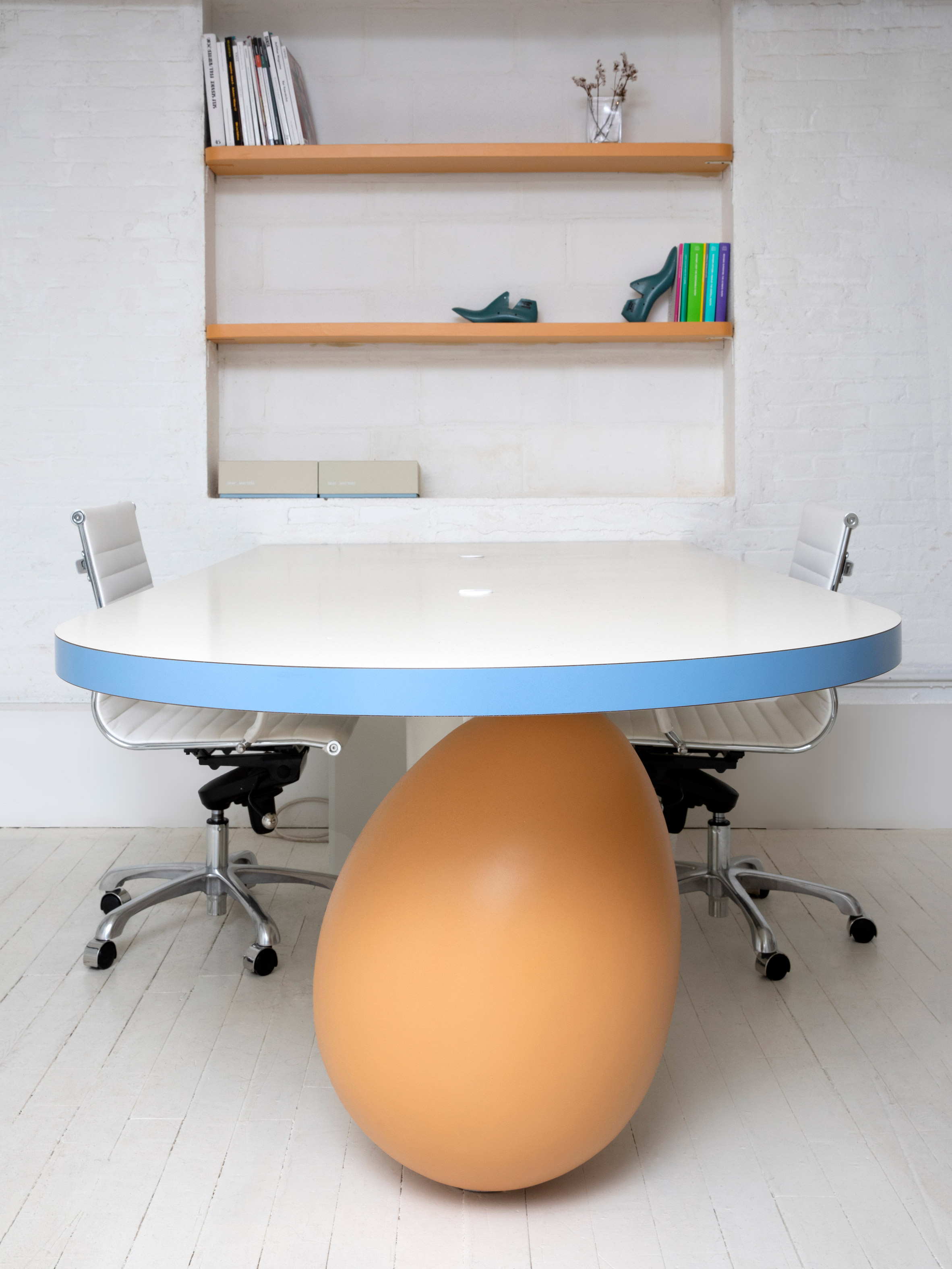 The studio customised the arched design from its series of graphic mirrors. Also featured in the showroom from this collection is the circular Orca Mirror, which resembles a porthole window near the rear of the space. 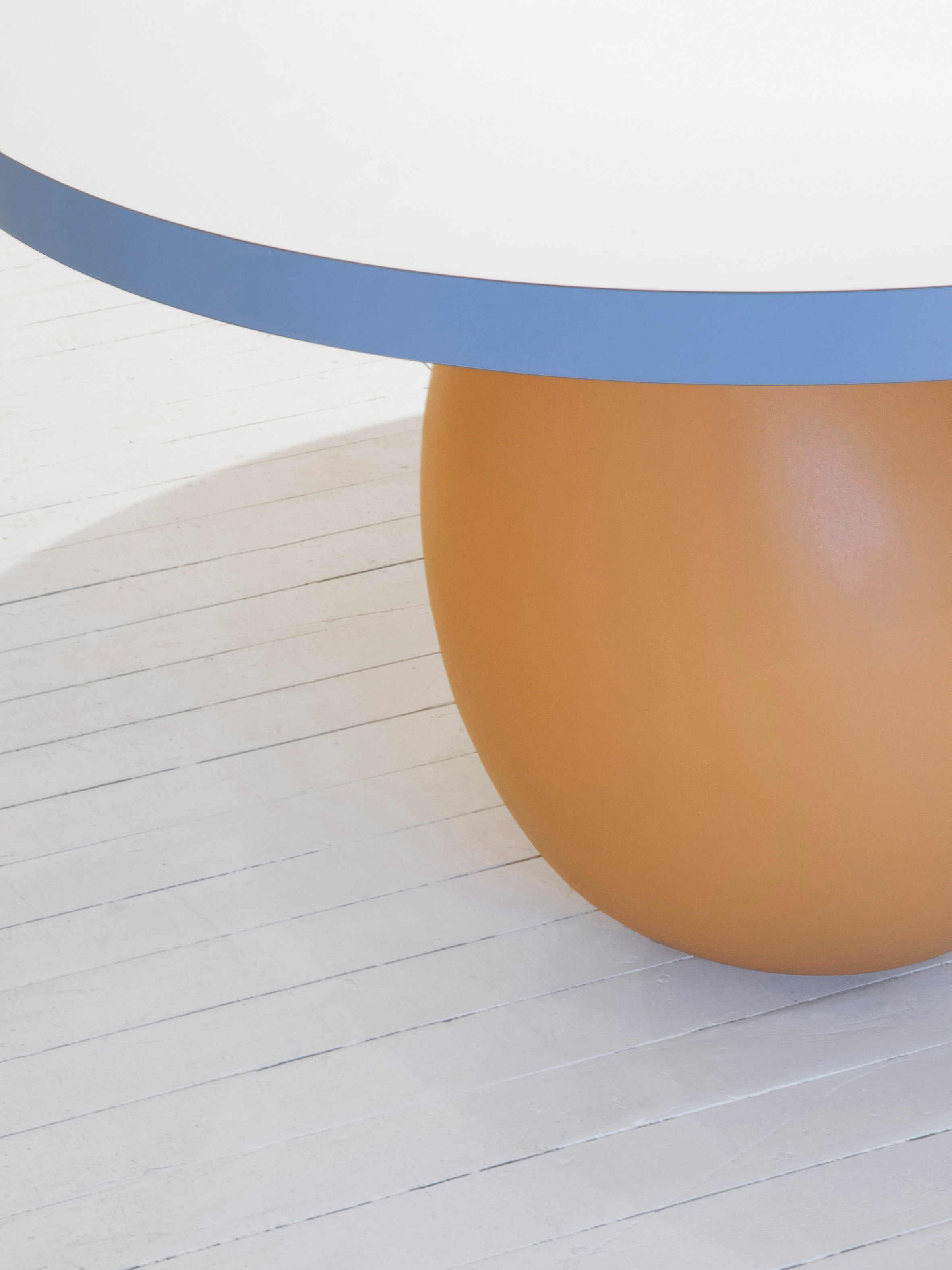 “The mirrors contribute to the young and spirited aesthetic feeling of the space, while also remaining elegant and refined,” said the studio.

Gray Matters‘ offbeat, sculptural shoe designs informed the furnishings, such as tables with richly textured travertine stone intended to mimic patterns of footwear in the collections. Orange, oval bases support these stone tops to draw on the egg-shape heel of the brand’s Mildred shoe. 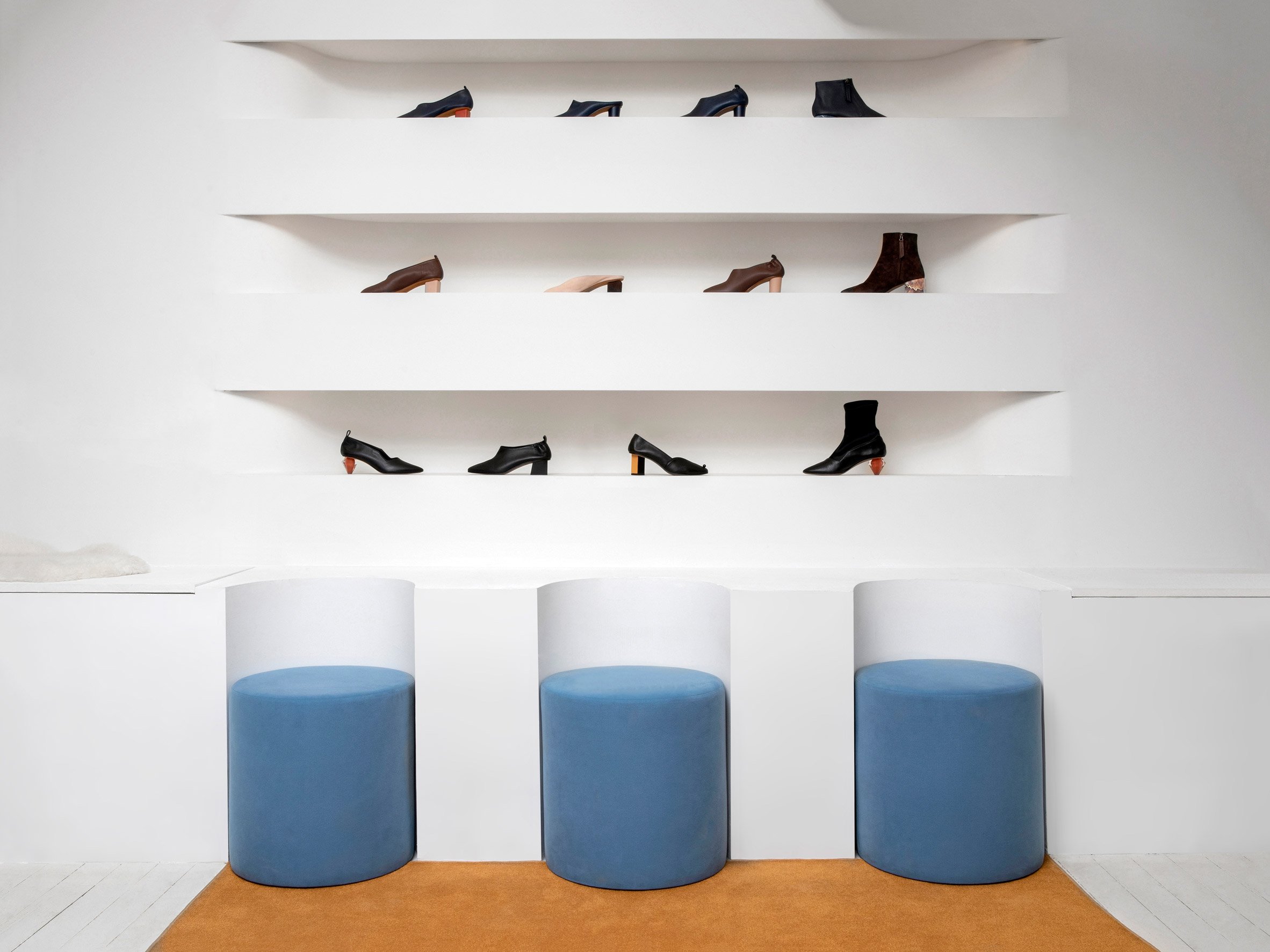 “The showroom design is inspired by the pleasing compositions, forms, materials and colours found in the very shoes that are on display, resulting in a cohesive blend of fashion and function,” said Bower Studios. 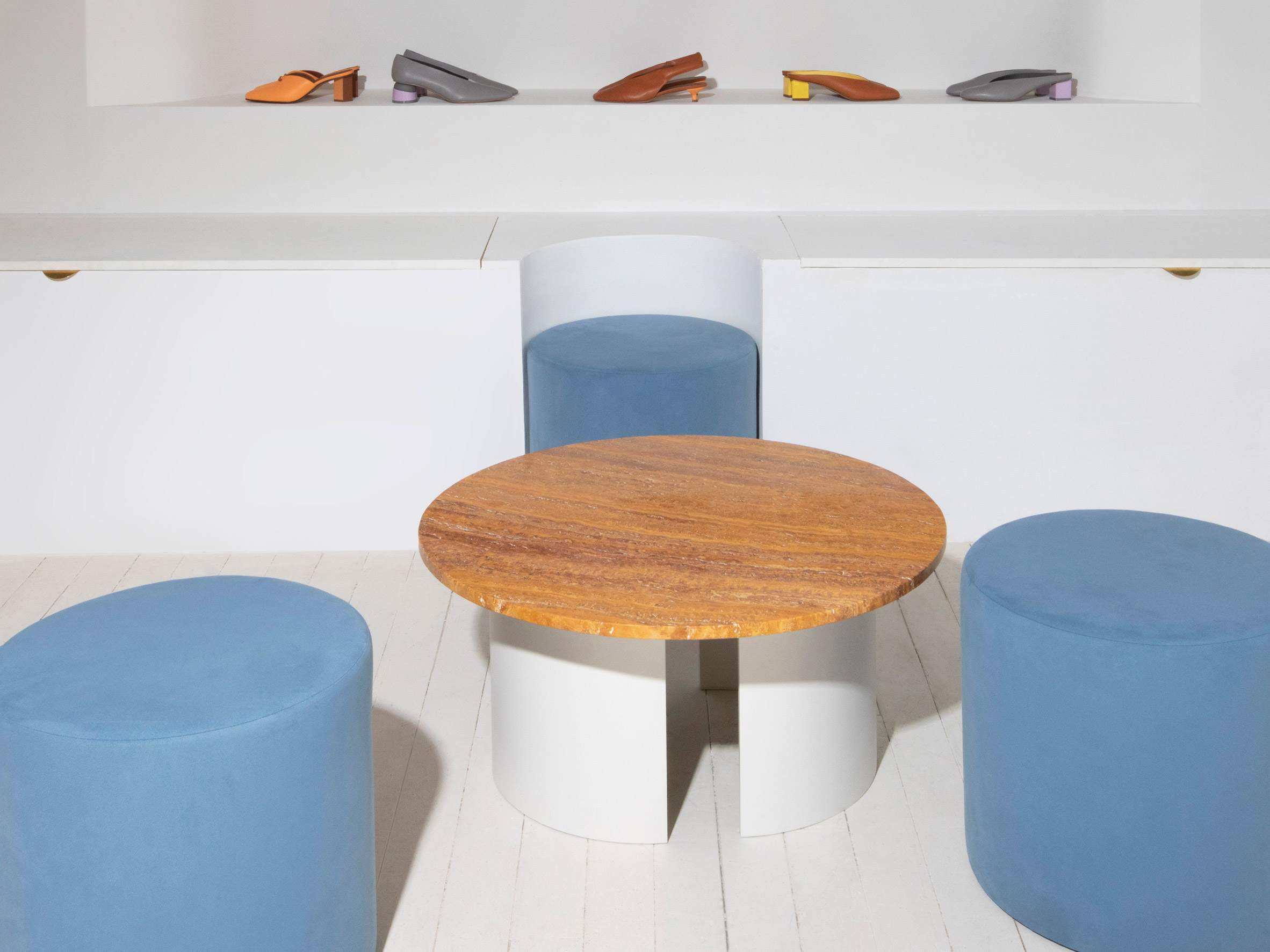 Similarly sculptural bottoms also hold up the white desks in the studio, which are detailed with blue edges to continue the colour theme.

In the showroom, blue cushions also top benches that are built into the walls, while matching stools slot into curved indents. Above these, shoes are displayed in slim nooks with curved edges, which are carved out in three rows along the walls. 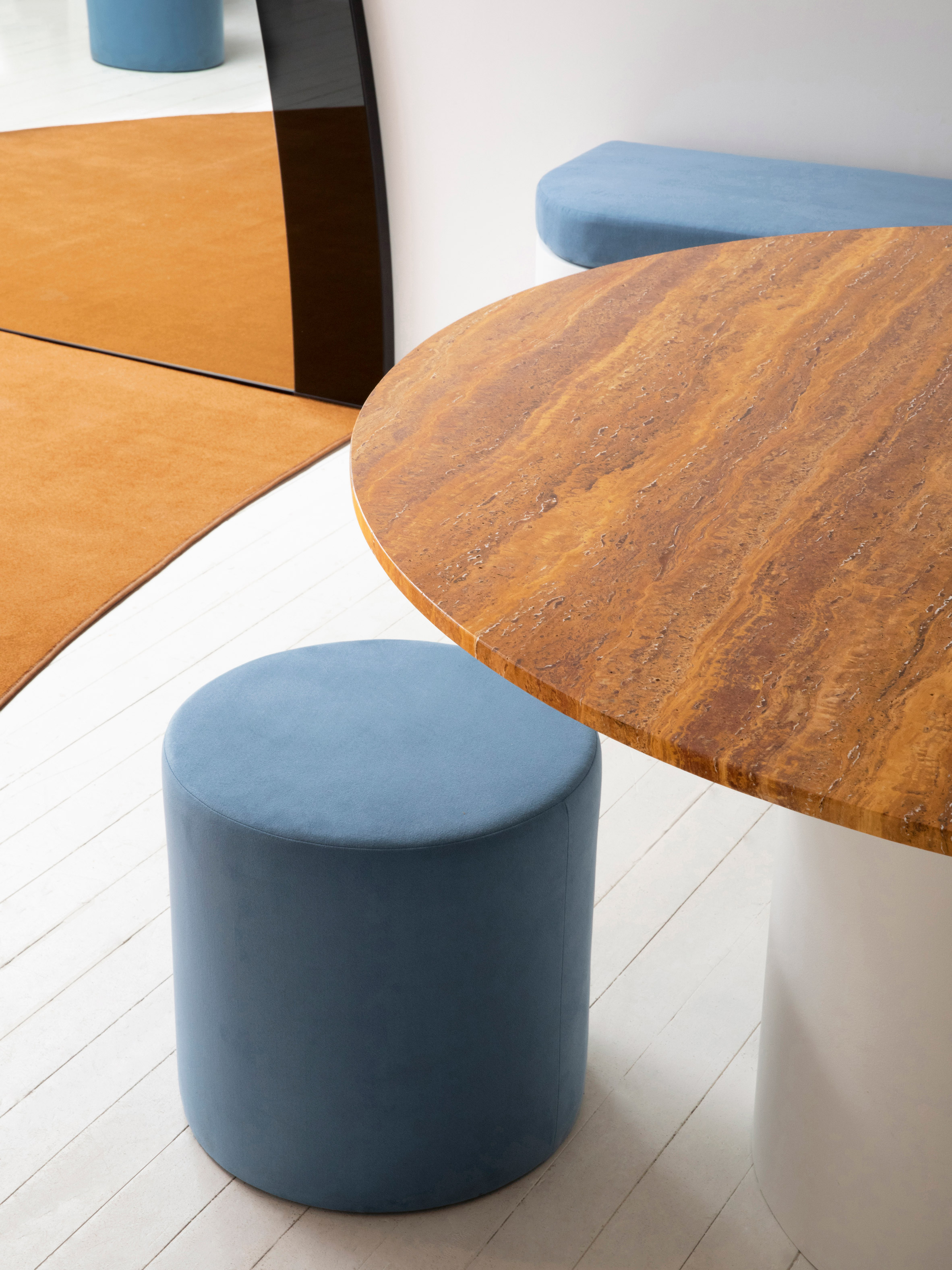 “The soft, curved lines of the shelving gently tuck into the wall to create a visual pattern of smoothed rectangles,” said the studio. 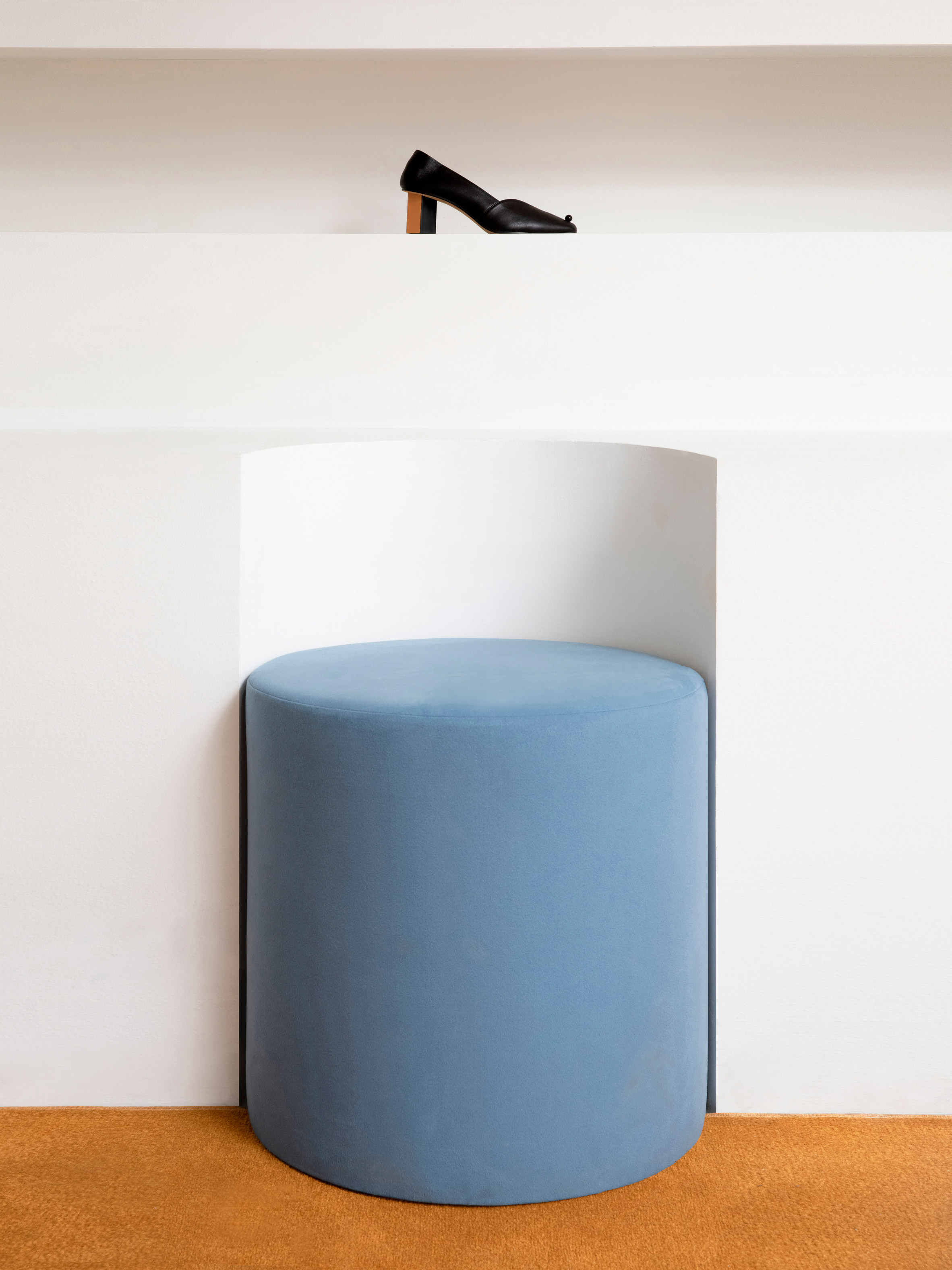 Complementing these shapely details is a golden pendant light, which comprises a pair of C-shaped elements with a spherical bulb at the end of each arm. 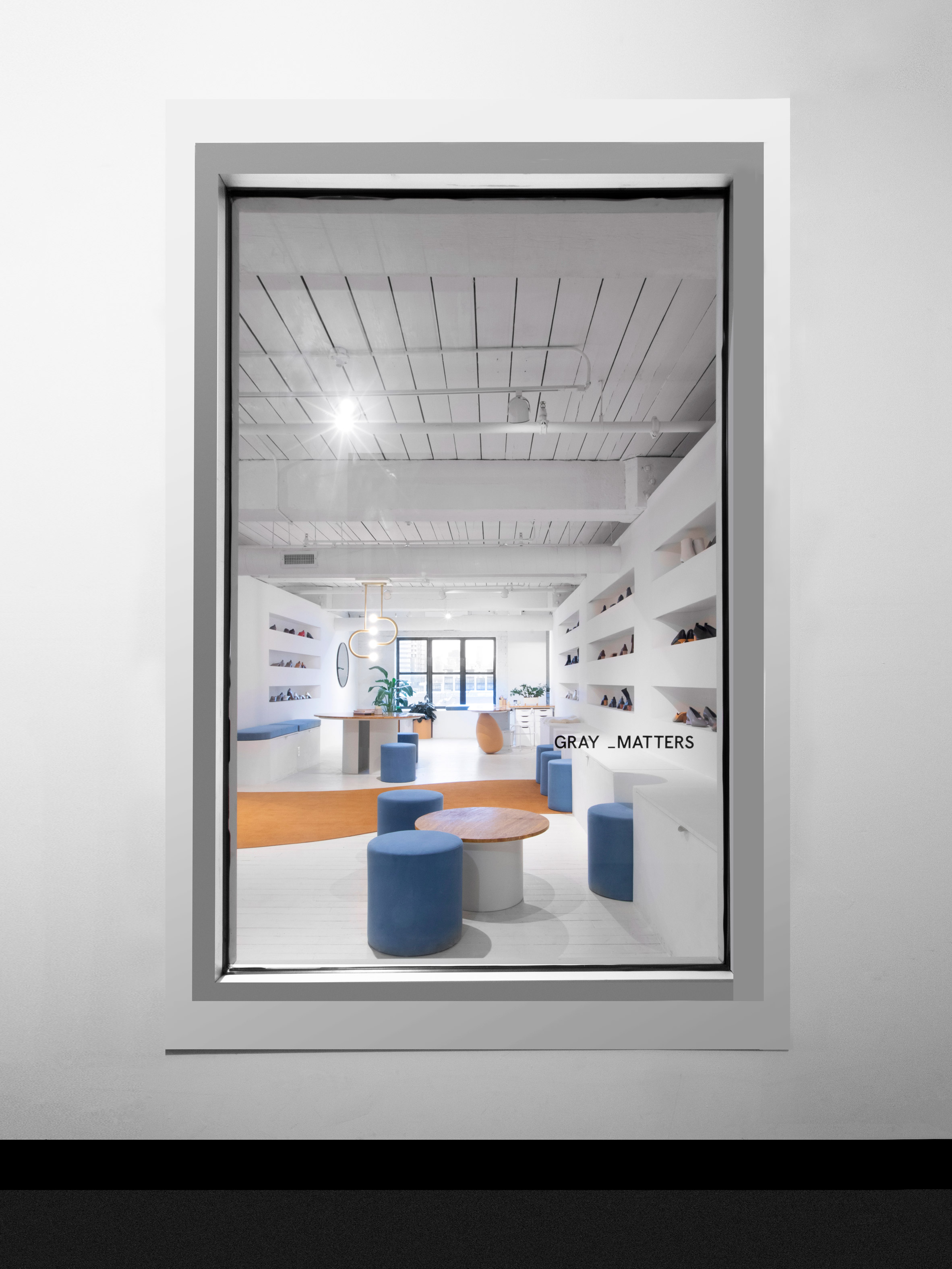 The light forms part of Bower Studio’s C range, which it launched alongside its preliminary set of illusionary mirrors in 2017.

Photography is by Charlie Schuck.