A shipping container appears to be slipping away from the top of this house on the island of Lombok, designed by Indonesian architect Budi Pradono. 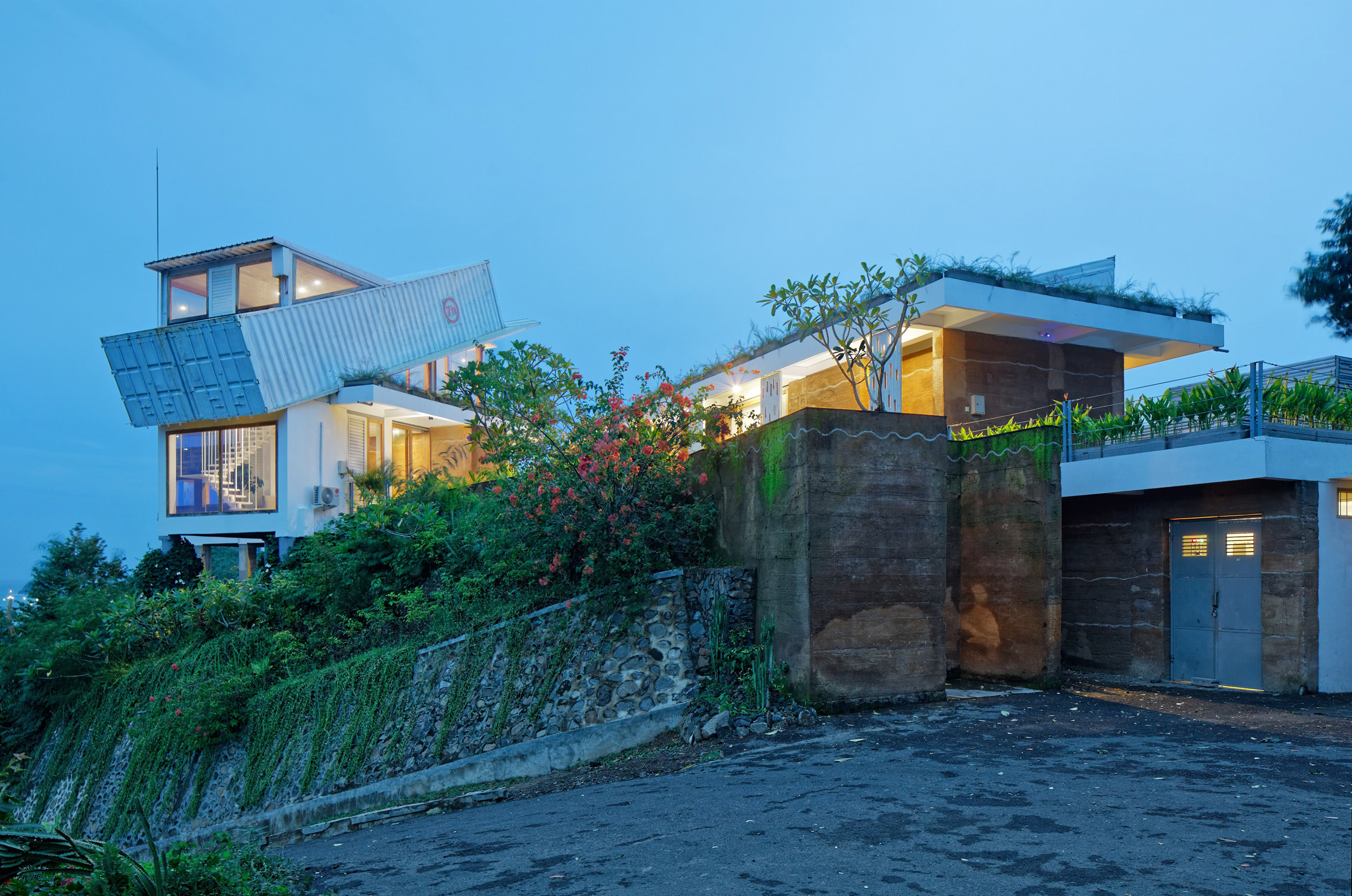 Clay House is set on a hill in Selong Belanak, a beachside area in the southern West Nusa Tenggara province of Lombak – an Indonesian island east of Bali. 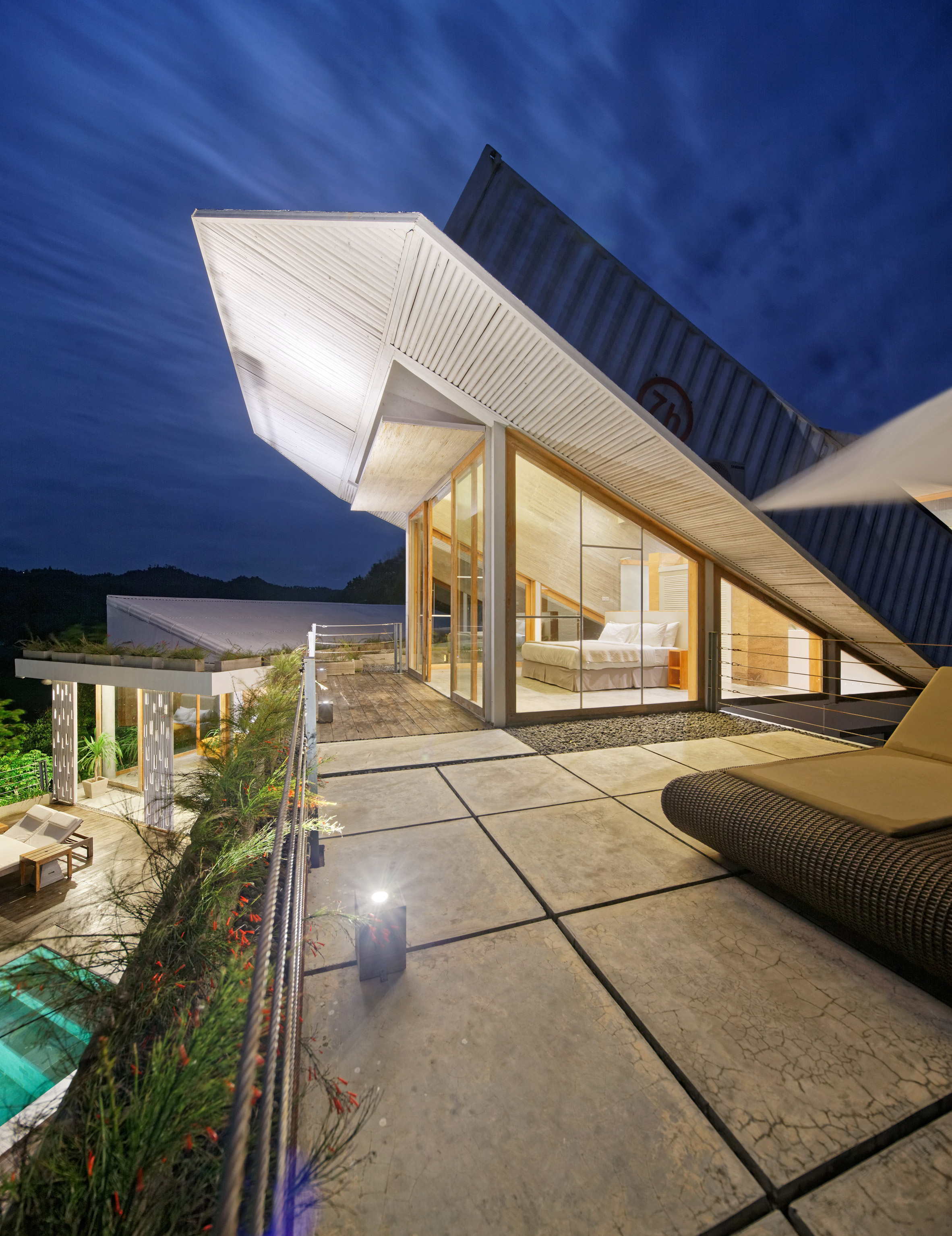 The residence is made up of a pair of volumes set on concrete stilts to rise above surrounding trees and face towards paddy fields and the Indian Ocean. The owner nicknamed it Seven Heaven Residence. 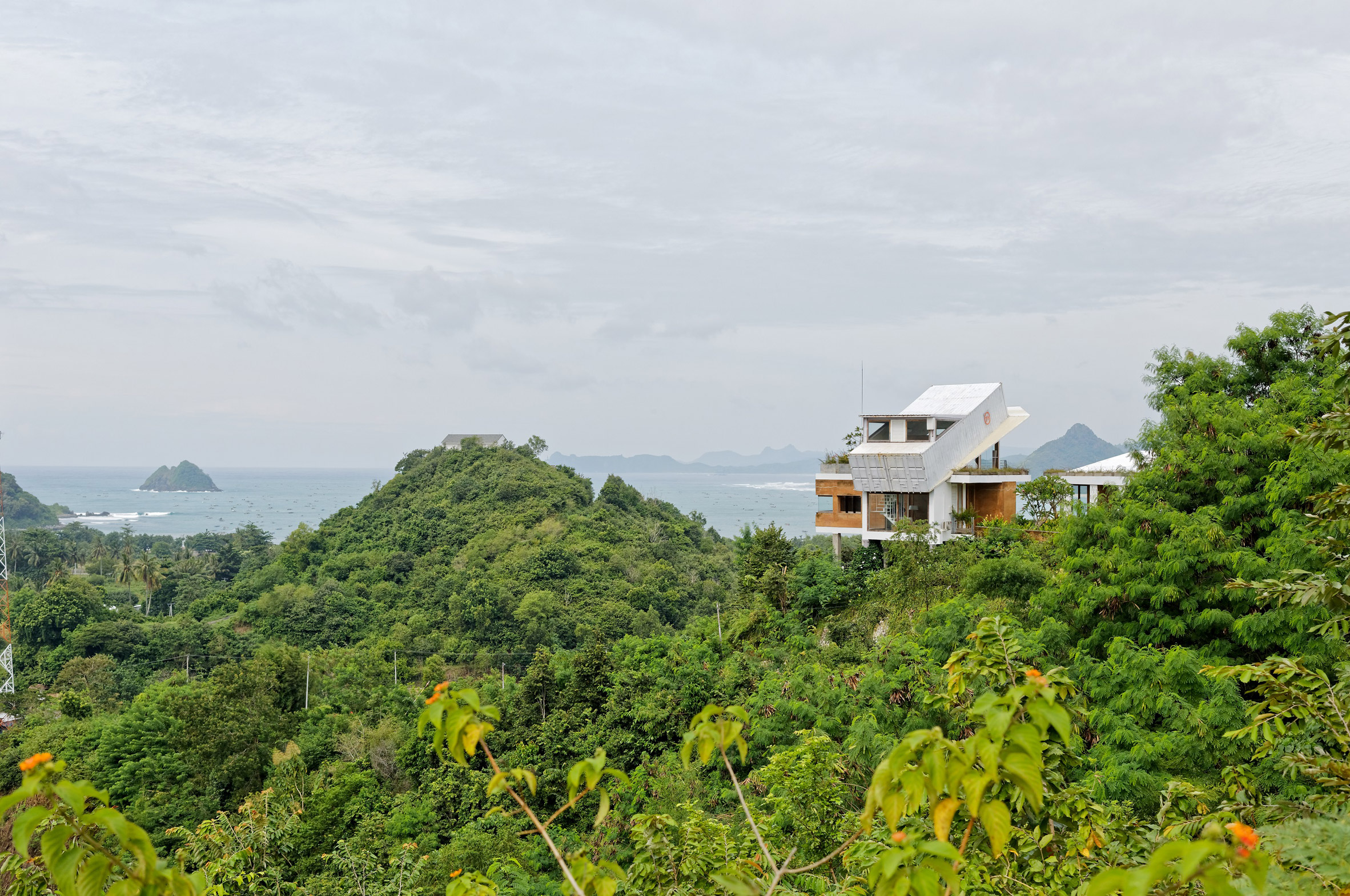 Budi Pradono Architects says the residence will be become a landmark in its surroundings, which are currently undeveloped.

“In the presence of this location on the hill of course we have to be careful because this building will automatically become an icon of the surrounding environment,” said the architects. 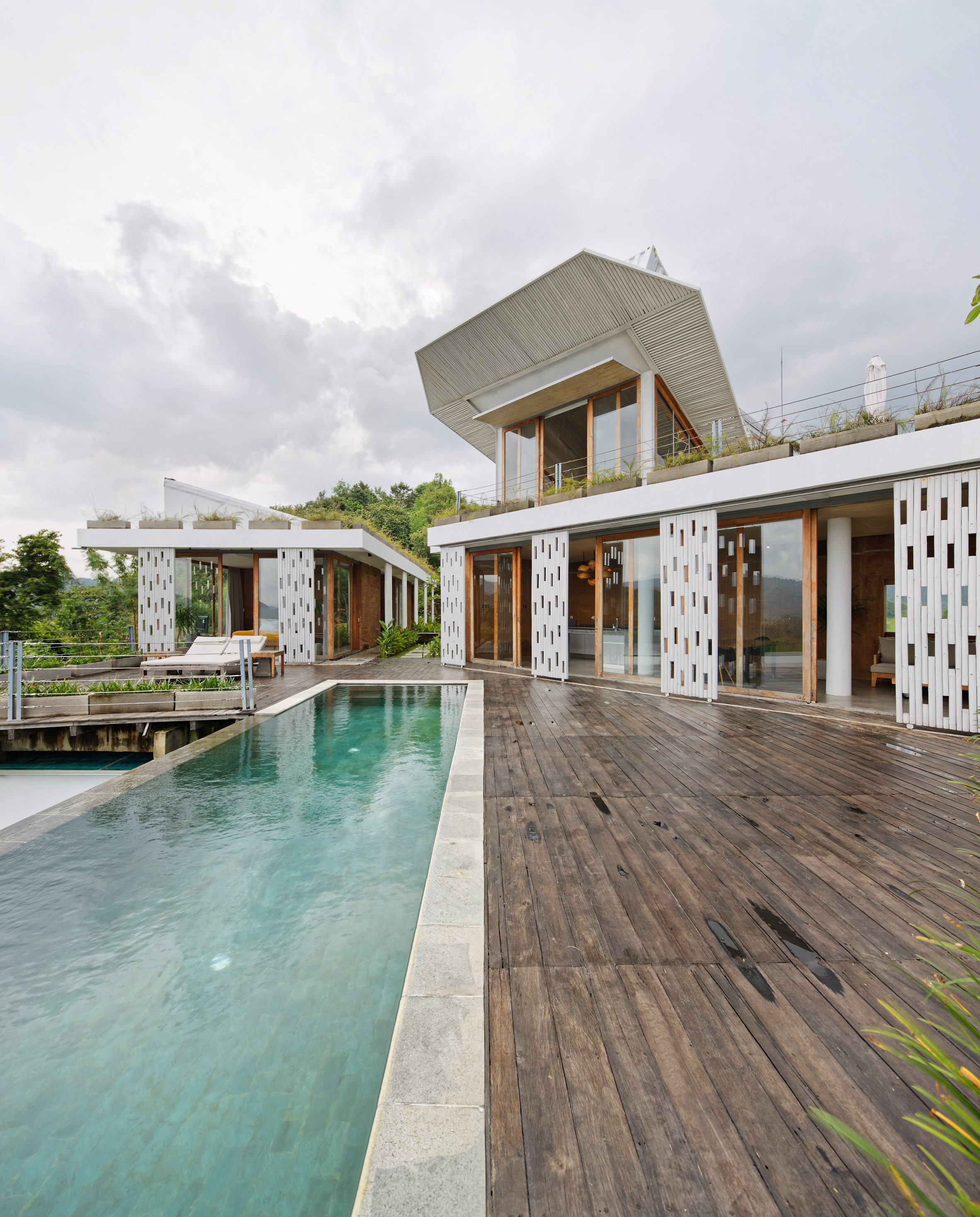 Placed at the highest point of the house, a 2.2-metre-high shipping container is angled upward at 60 degrees to create a high ceiling in the master bedroom, and a big window with doors that open to a terrace. 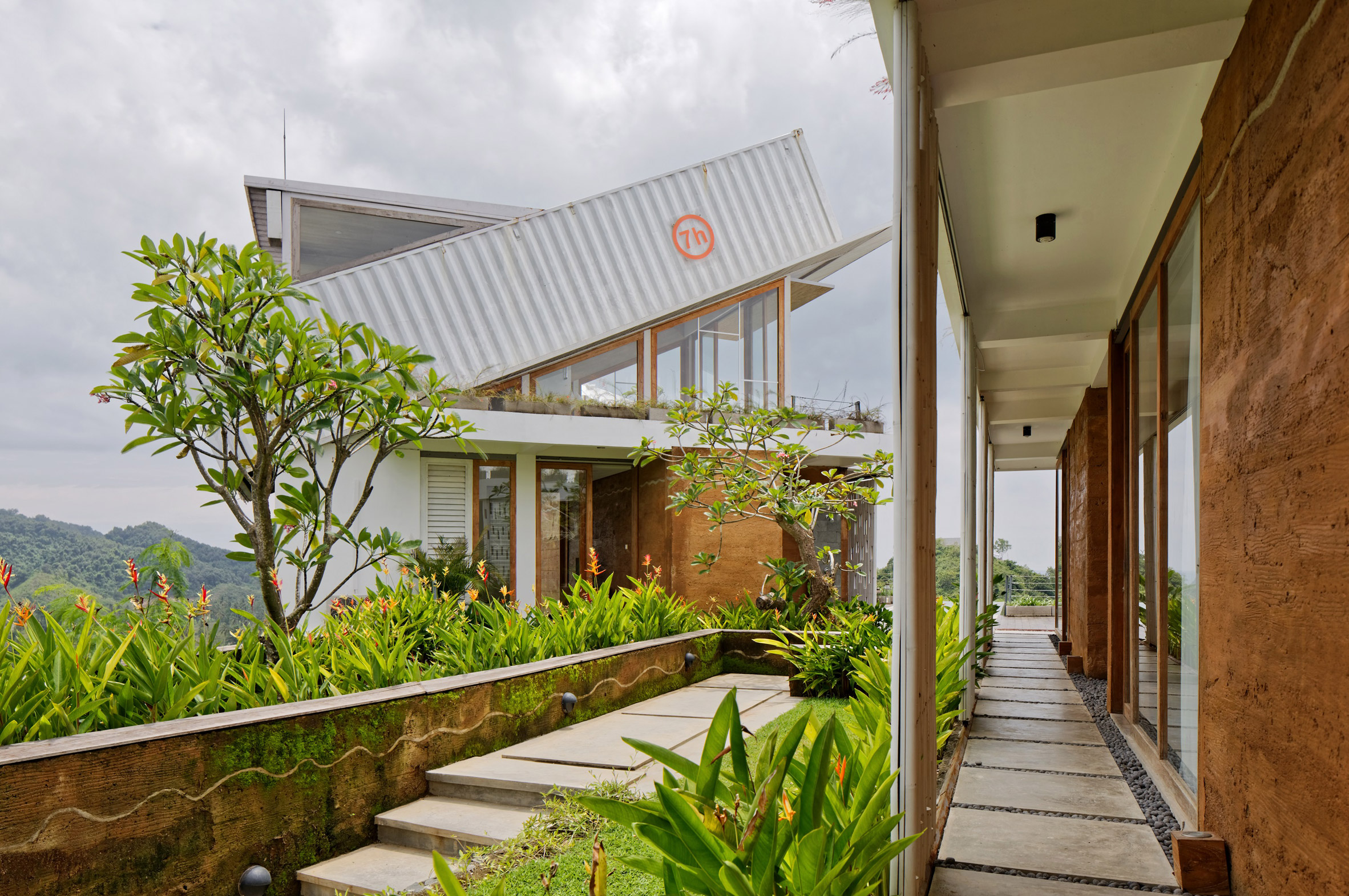 This is not the first time that Budi Pradono Architects has employed tilted volumes. The studio has previously completed a leaning residence as an antithesis to the mock-European styling of homes in a gated community in Jakarta. 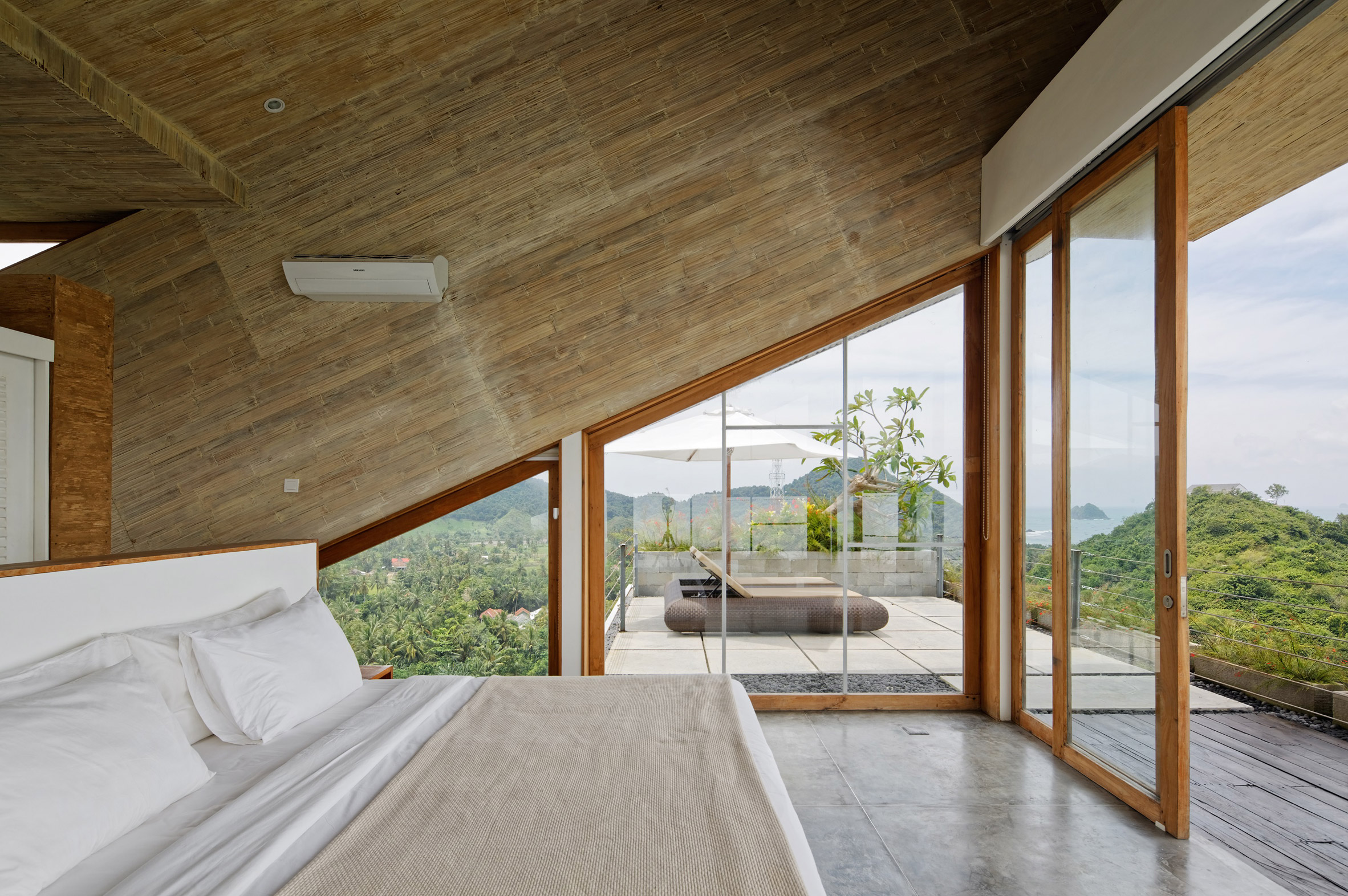 At Clay House, a second window projects out on the other side to offer daylight into the en-suite bathroom, while the exterior is painted white to reflect the sun and avoid overheating. 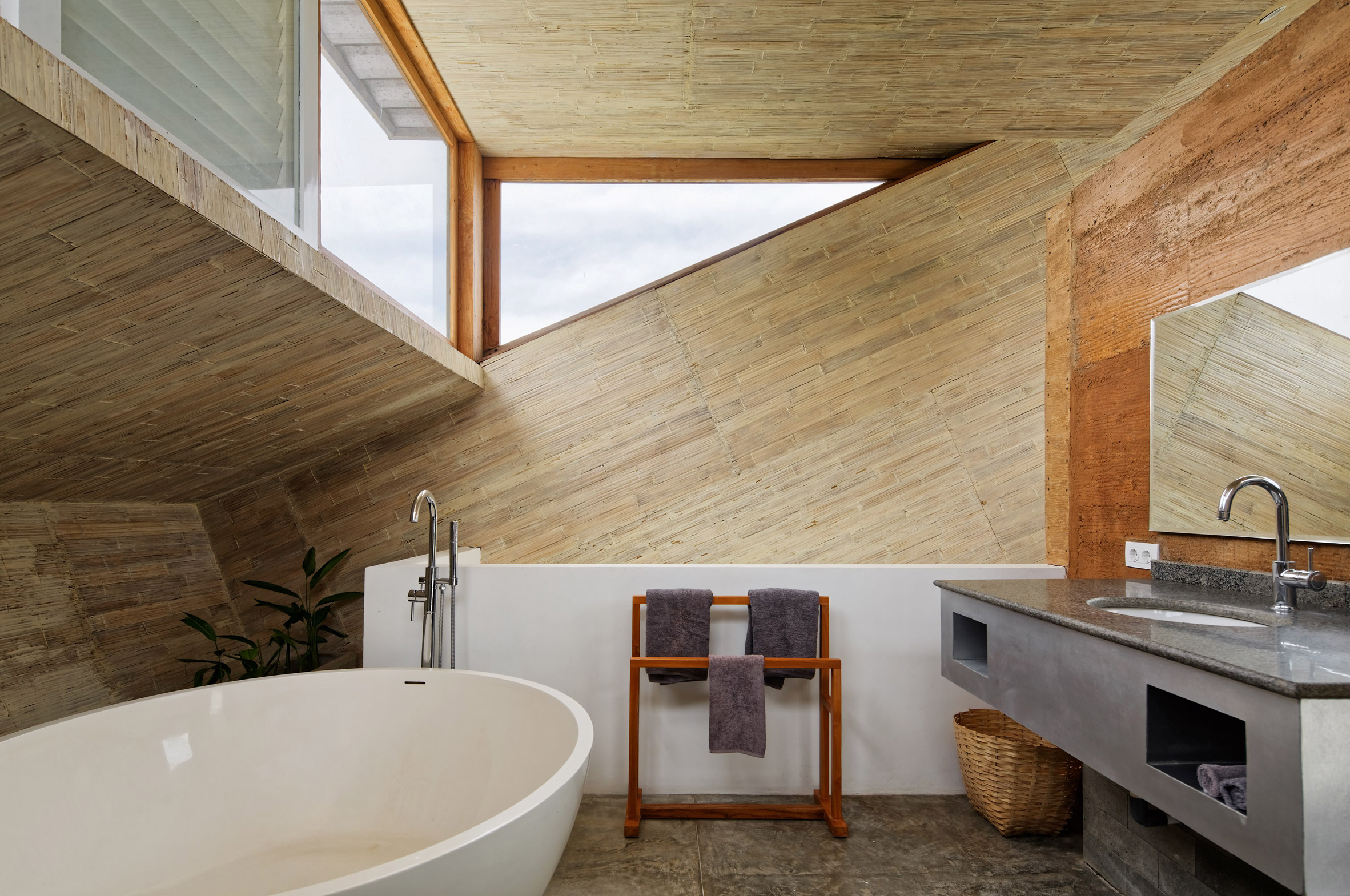 The container was sourced from a port of a nearby island; it still bears a “7h” orange logo. The metal cuboid is among a series of locally sourced materials that Budi Pradono selected for the house. 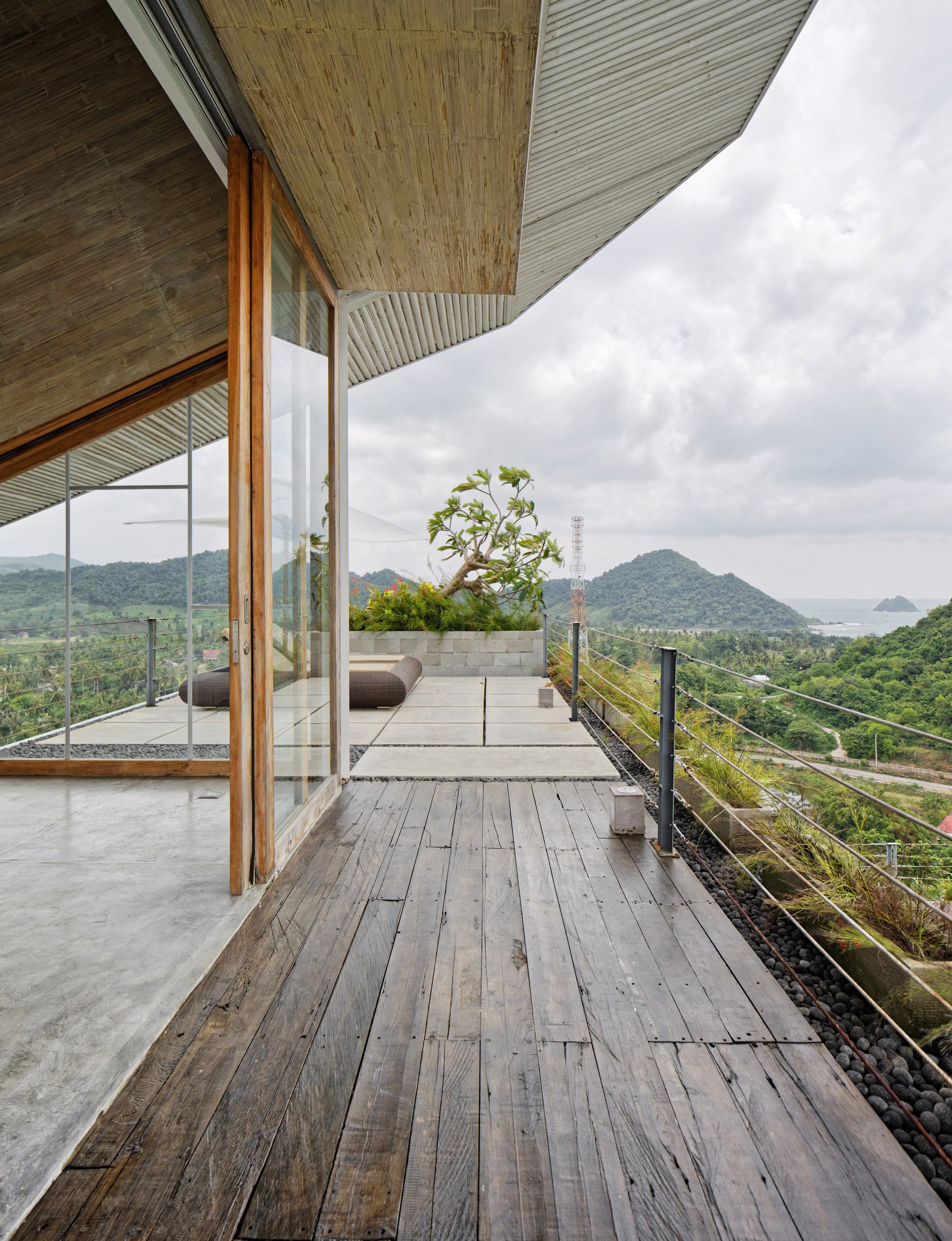 Others include the clay for the walls, which was collected 20 kilometres from the site and treated by craftsmen with a mixture of sand, cement, straw, and cow dung.

The board-marked walls, which are 30 centimetres thick, help to prevent overheating in the hot and humid climate. 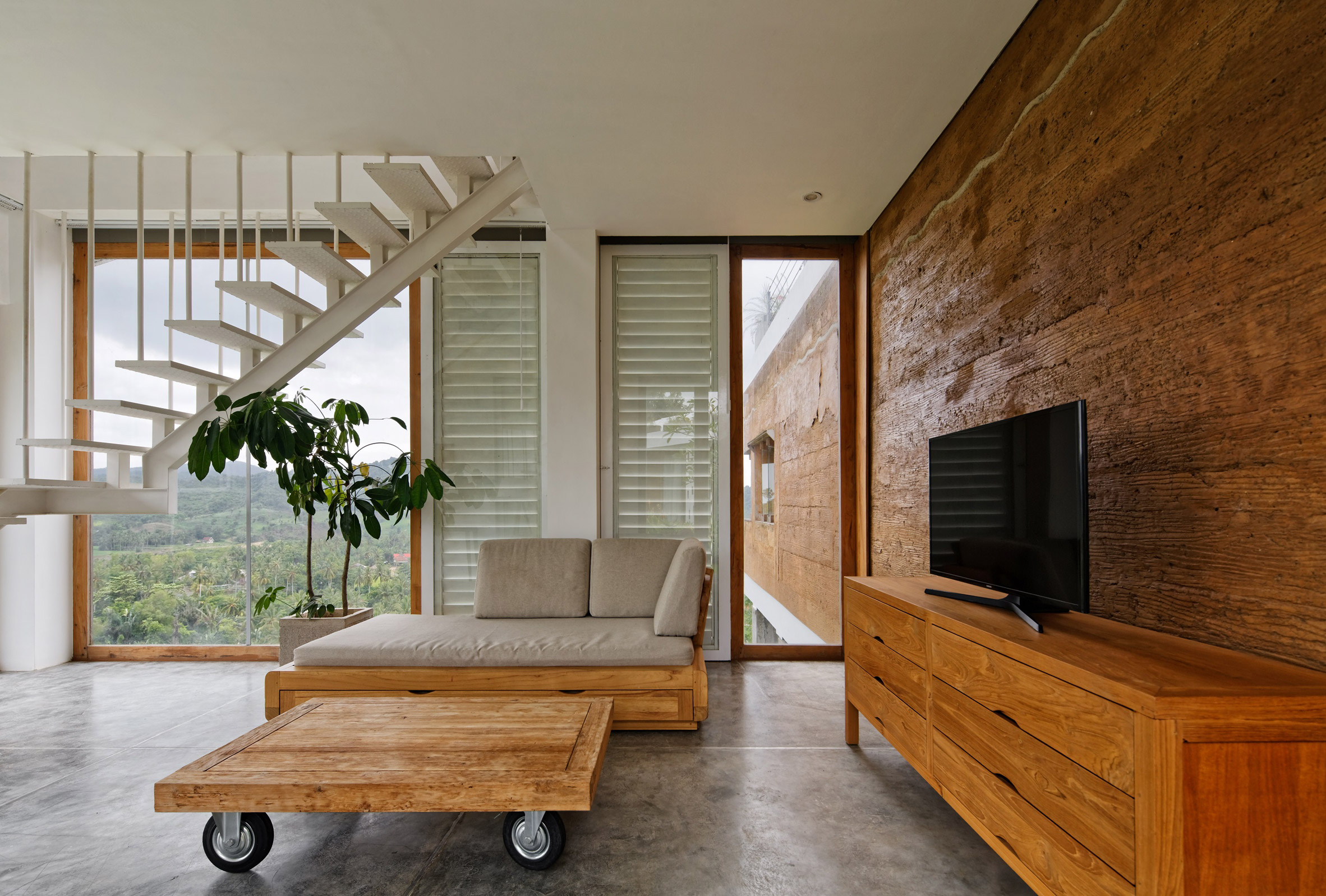 Flattened bamboo provides internal cladding. The plant was harvested at night when no photosynthesis was taking place, so most of its starch is still in the roots.

It then underwent a process of preservation, which included submersion in sea water for two months and a coating of paint. 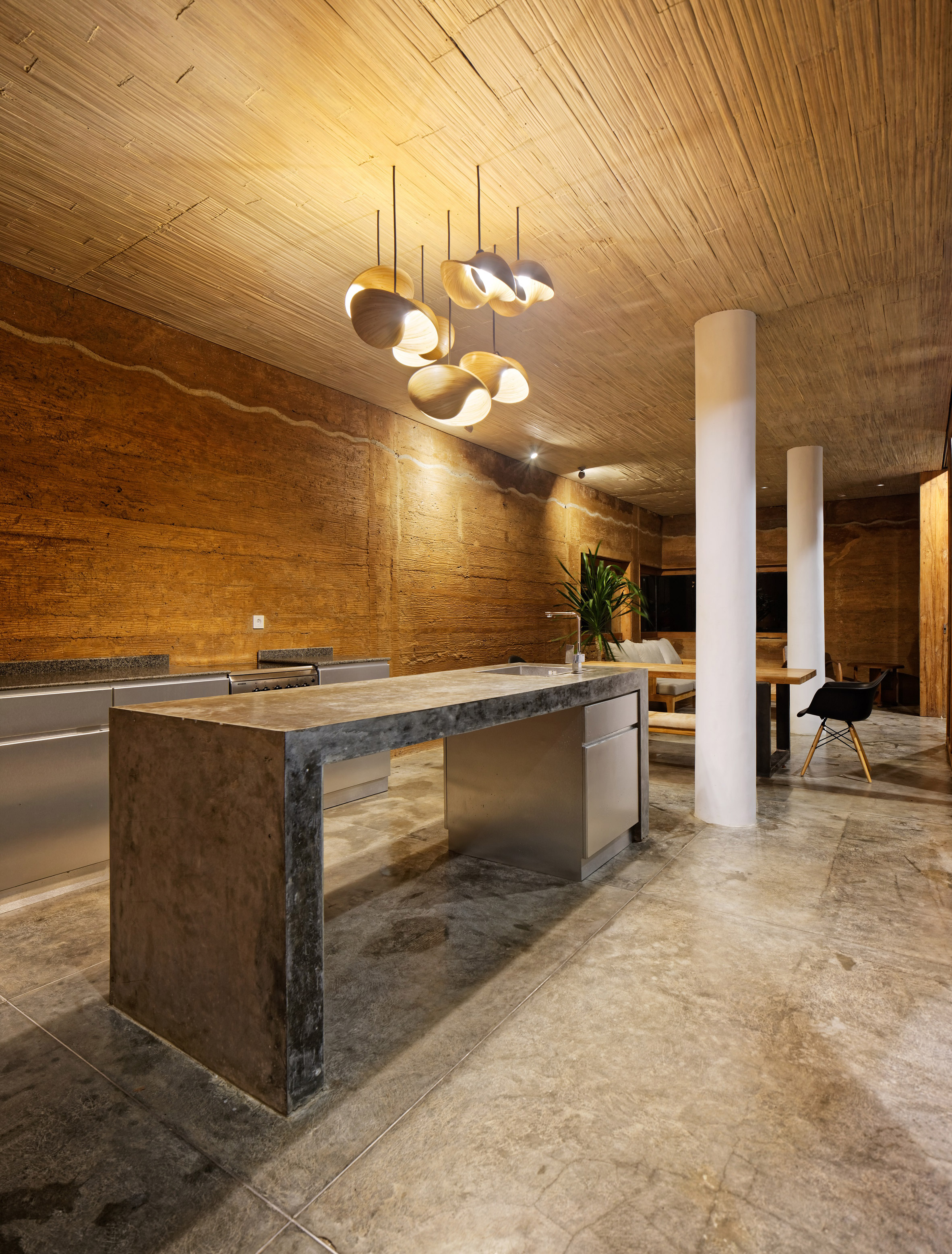 Exposed natural materials also feature throughout the residence to complement the building materials, like heavy wooden furniture and stone tiling.

At the front of the residence, a staircase set between two walls draped with greenery leads to the entrance.

The volume underneath the container is occupied by the living, kitchen and dining room and aligned so its longest side faces a long and narrow swimming pool that extends out at the rear. 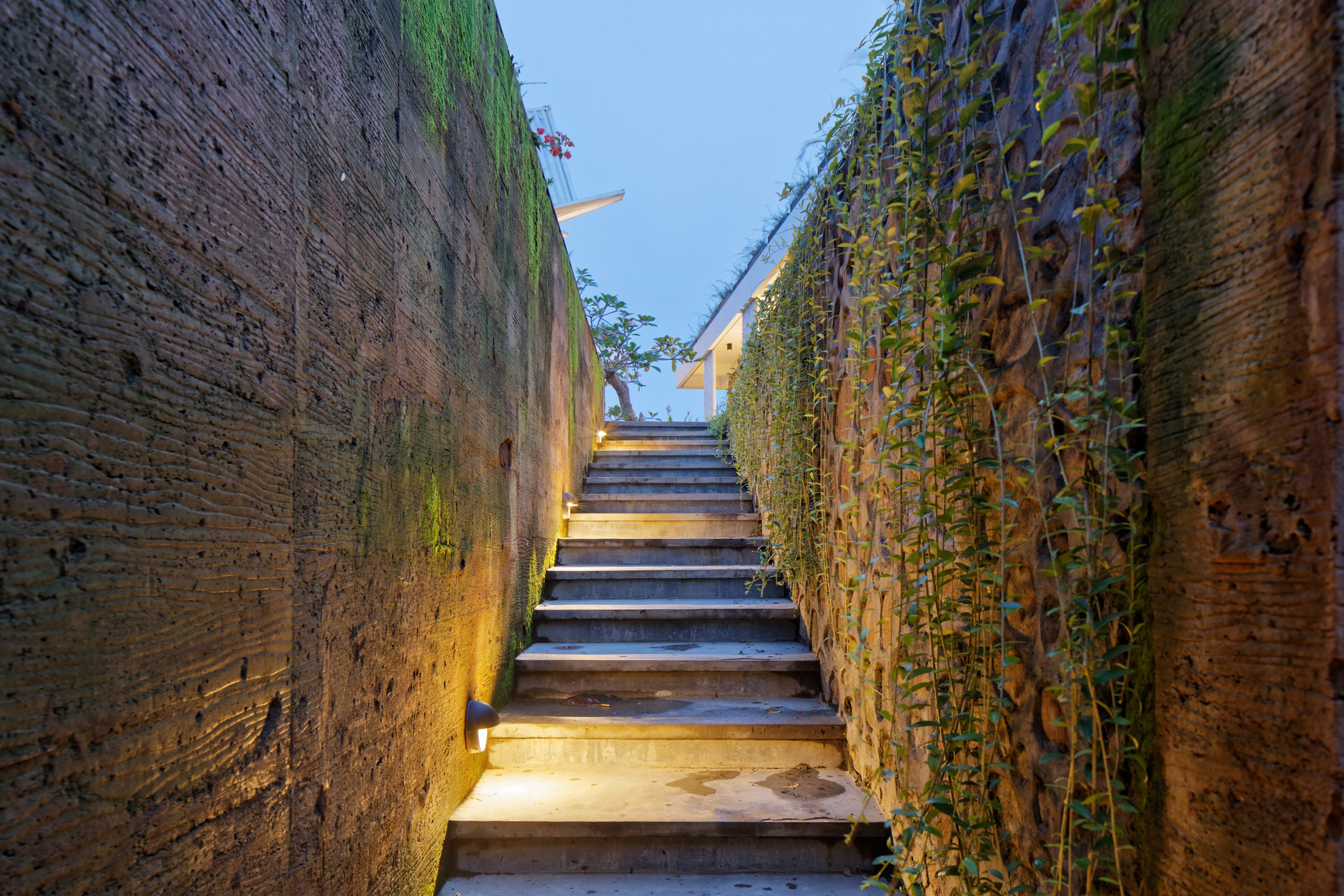 Budi Pradono Architects ranked 168th on the first ever Dezeen Hot List. The studio has also completed a property with trees inside, and a bamboo house that mimics the shapes of nearby buildings and mountains. 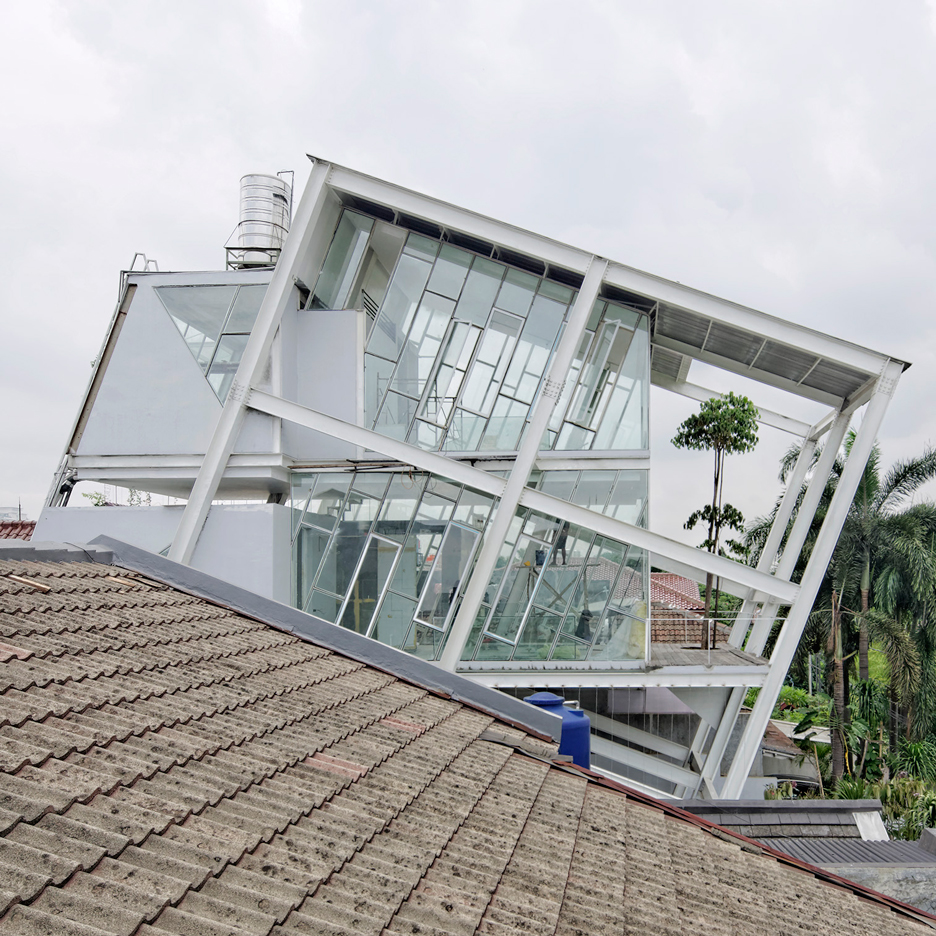