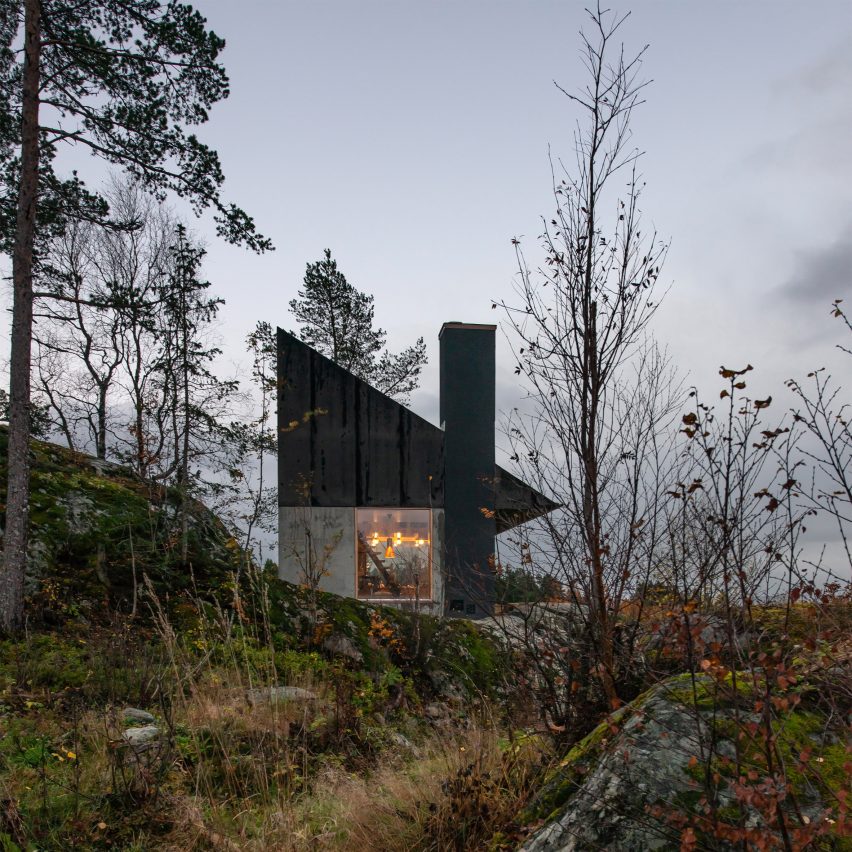 Sanden+Hodnekvam Arkitekter has used concrete and wood to build a minimal cabin on an outcrop beside the Beitstadfjorden in Norway.

Named Cabin at Rones, the dwelling was commissioned by a couple who wanted a simple space to relax and enjoy views of the fjord. 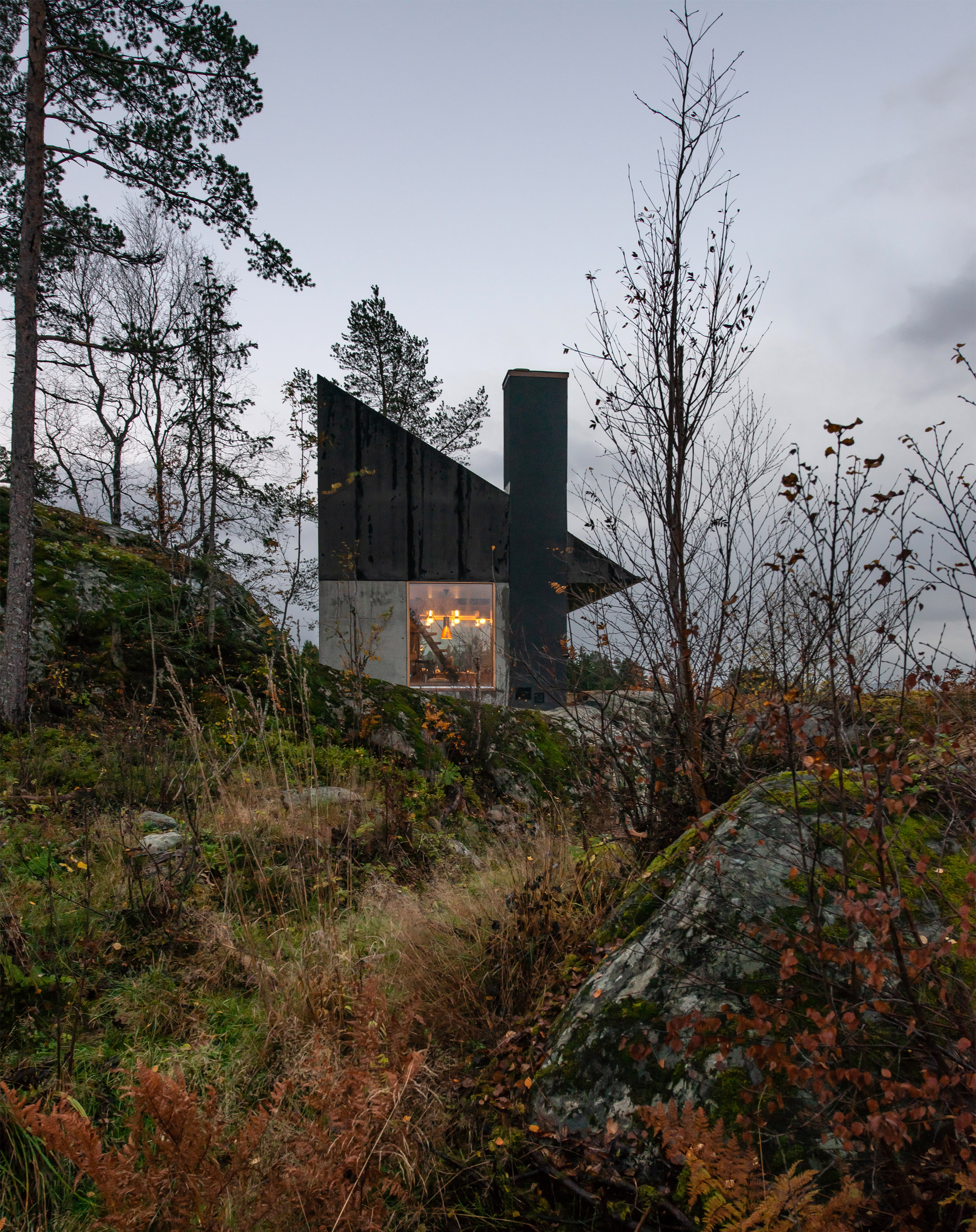 It measures 47 square metres, and is designed by Norwegian studio Sanden+Hodnekvam Arkitekter to resemble a secluded hiking shelter that forms a “strong connection” with the landscape.

“The cabin is inspired by the natural space that was at the site before the building was constructed. A big rock on the site became the back of the building, offering a natural shelter,” explained John Sanden, partner at Sanden+Hodnekvam Arkitekter. 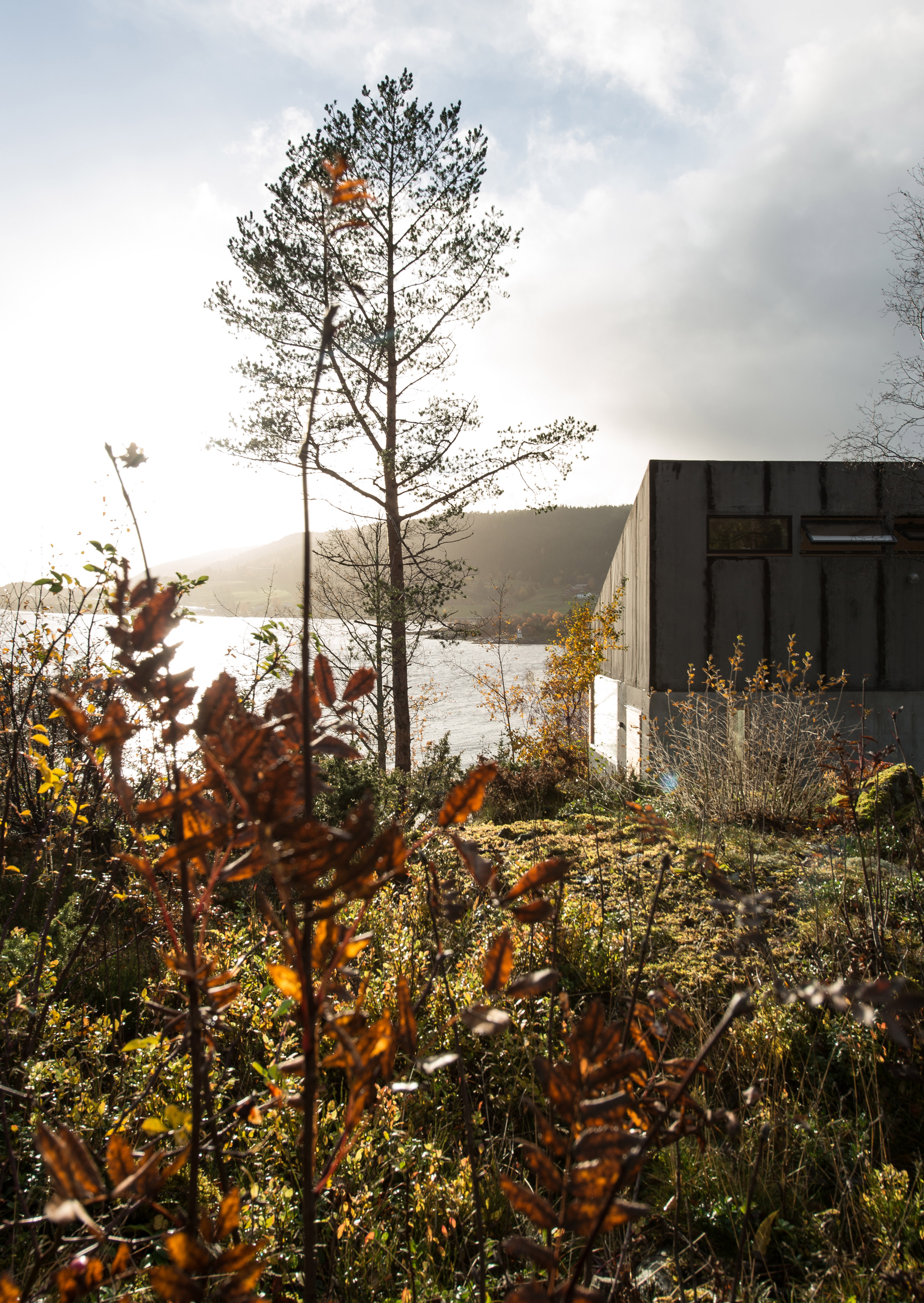 “Norwegians like hiking and spending time outdoors. When we stop for a rest, this type of protected space is what we look for,” he added.

“In the cabin we were aiming for the same type of spatial quality, shelter and a feeling of seclusion.” 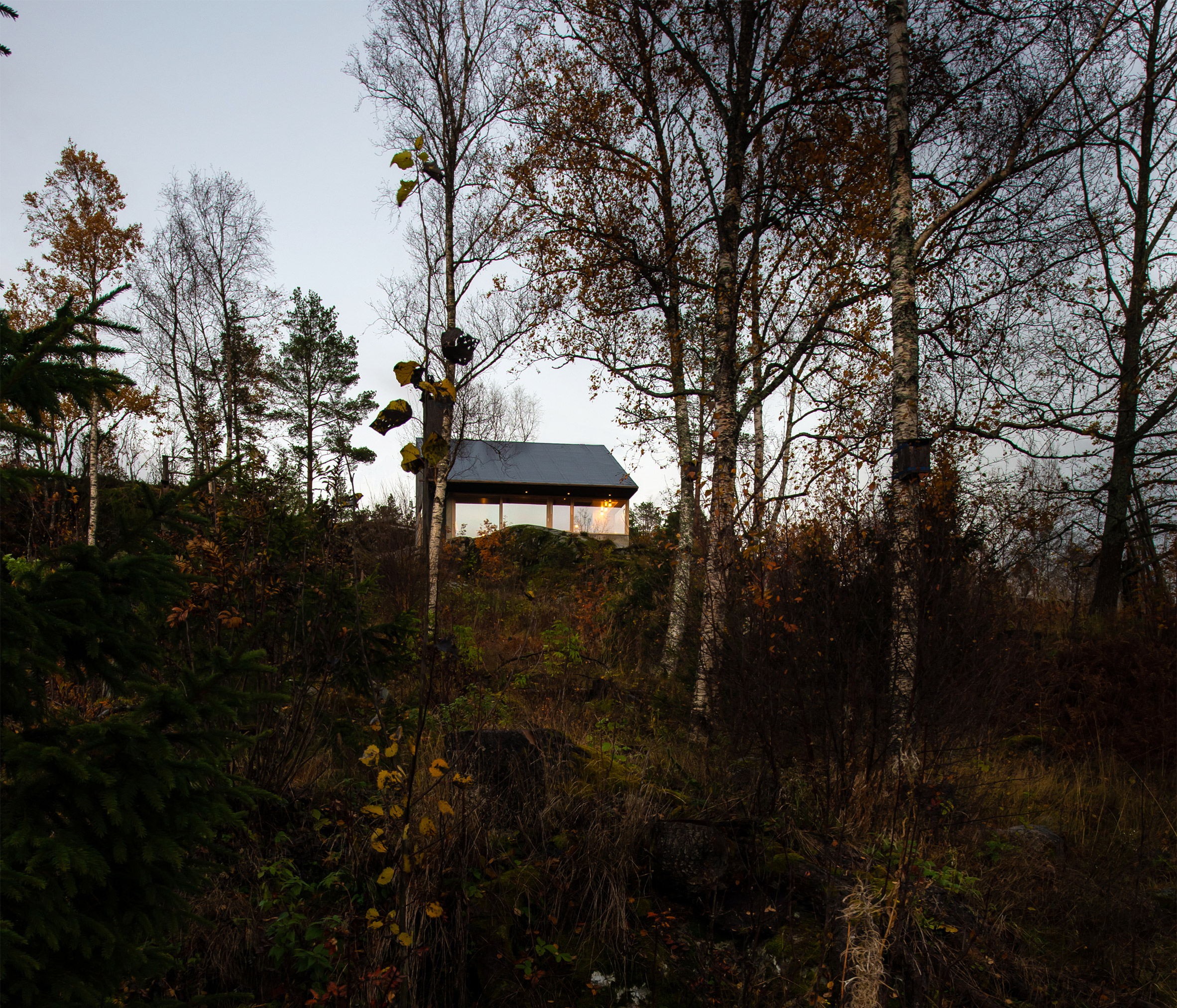 Cabin at Rones comprises two levels, and is adapted to the topography of the site to reduce its impact on its vegetation.

The ground floor is made from concrete and staggered over three levels in line with the terrain, and comprises a living area, dining room and kitchen.

It is fronted by large windows that create “close contact to the nature outside”, and the dining area opens out to a wooden terrace. 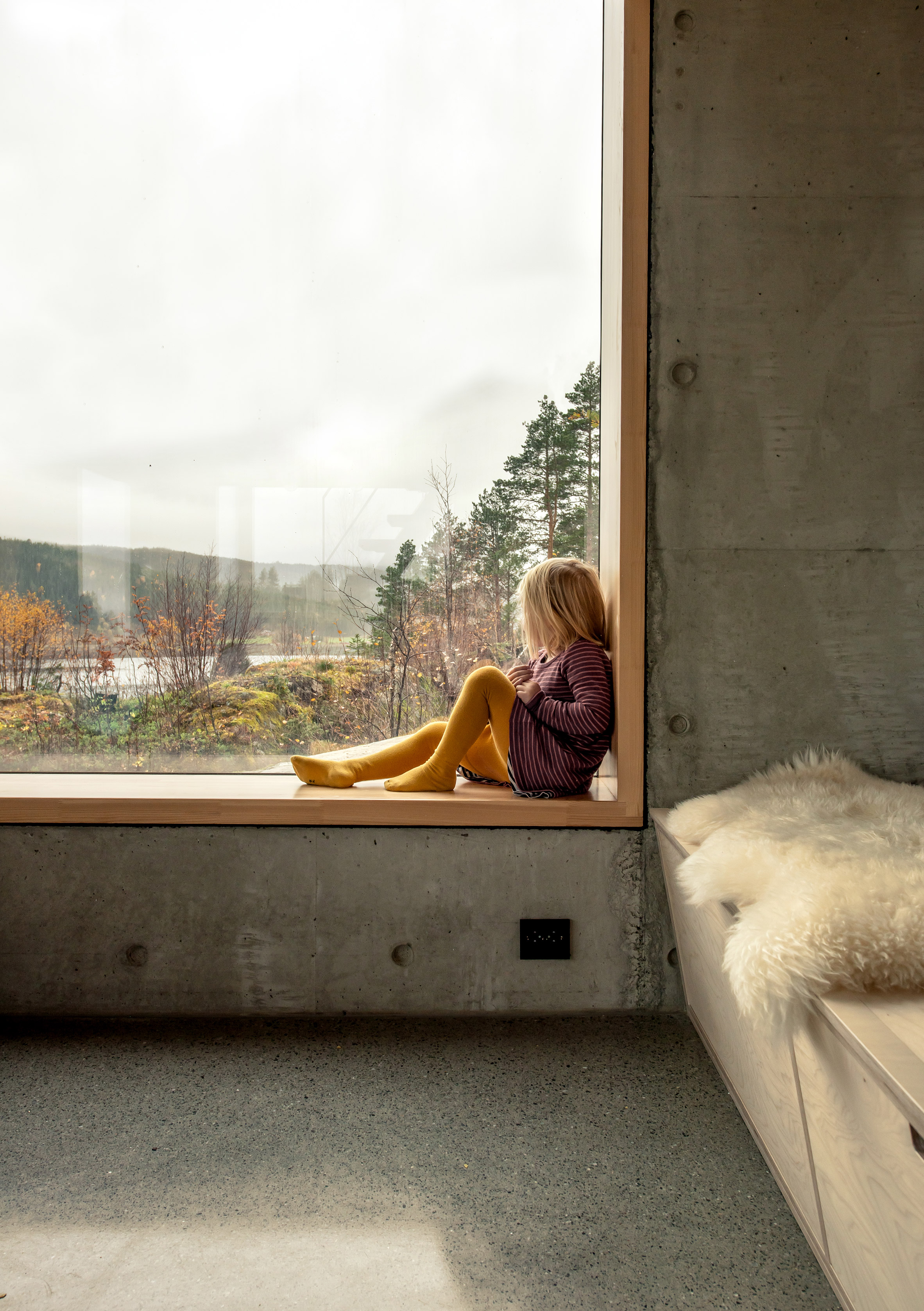 The upper level is built from locally sourced cross-laminated timber (CLT). It has a triangular form clad in black roofing felt to reference vernacular buildings.

Accessed by an alternating tread stair, the cabin houses a bedroom, bathroom and landing space that leads out onto the outcrop at the rear of the cabin. 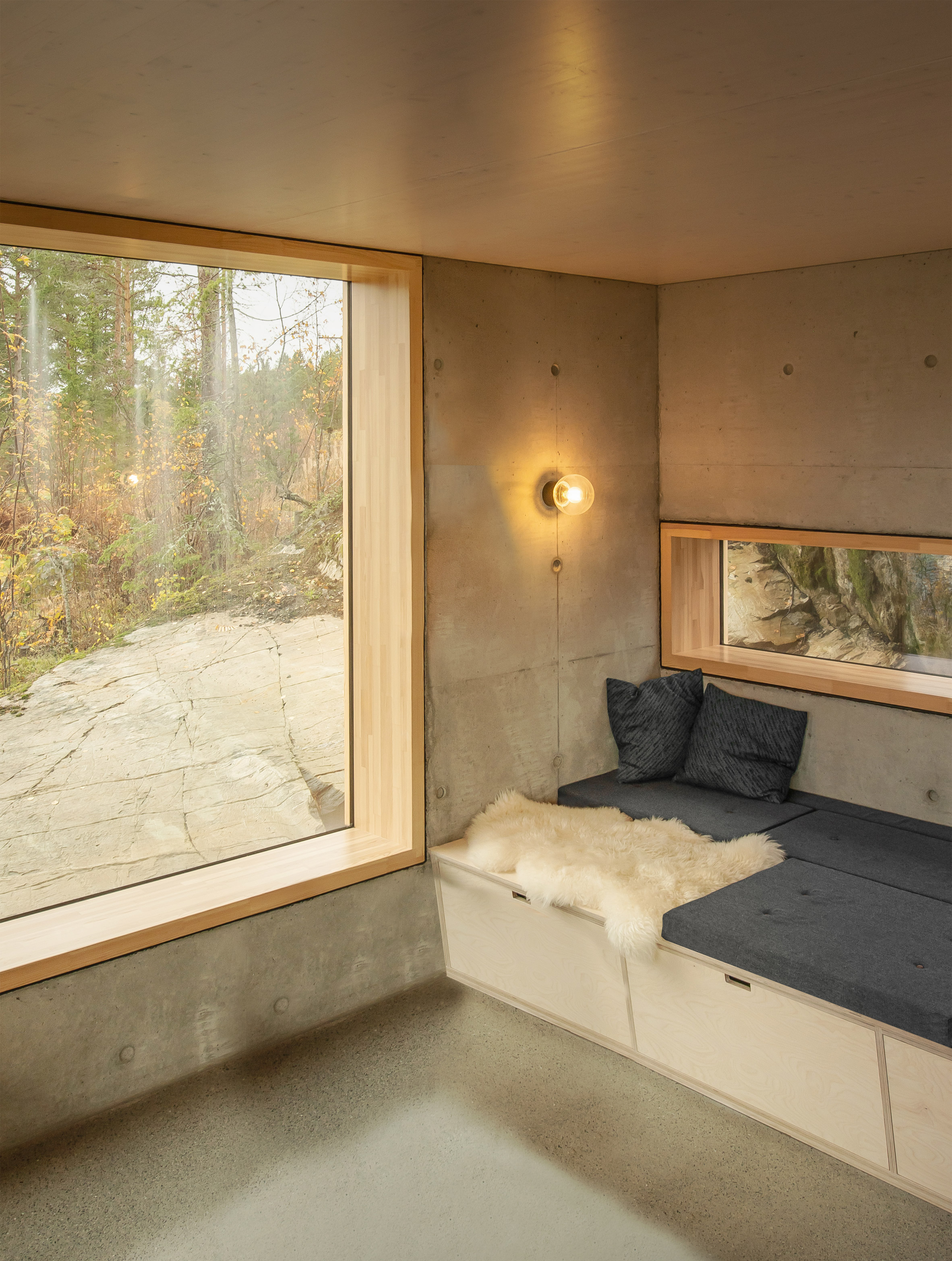 On the ground floor, the interiors are characterised by its exposed concrete walls and polished concrete floors that are teamed with light-coloured fittings in Norwegian pine.

The upper storey is lined entirely in the same pine wood, offering a light counterpoint to the ground floor spaces. 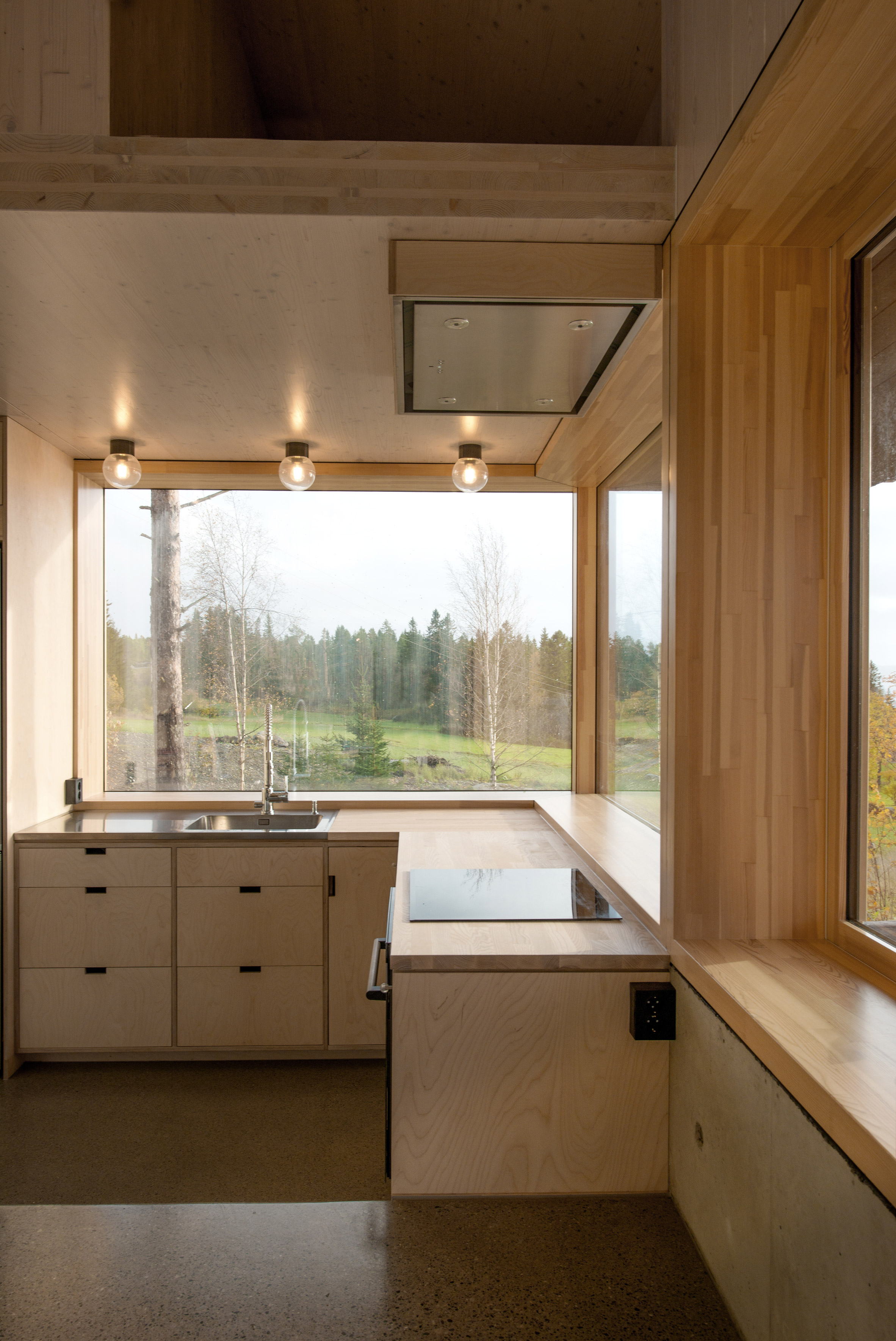 Furniture throughout the house was designed by the architecture studio, and made by a local carpenter from steel and birch plywood.

In 2014, architecture studio Nickisch Sano Walder Architects also used concrete to build a minimal cabin. Located in the Swiss Alps, it has a rough scalloped exterior cast from timber acquired from its predecessor – an aged log cabin.

Photography is by John Sanden.