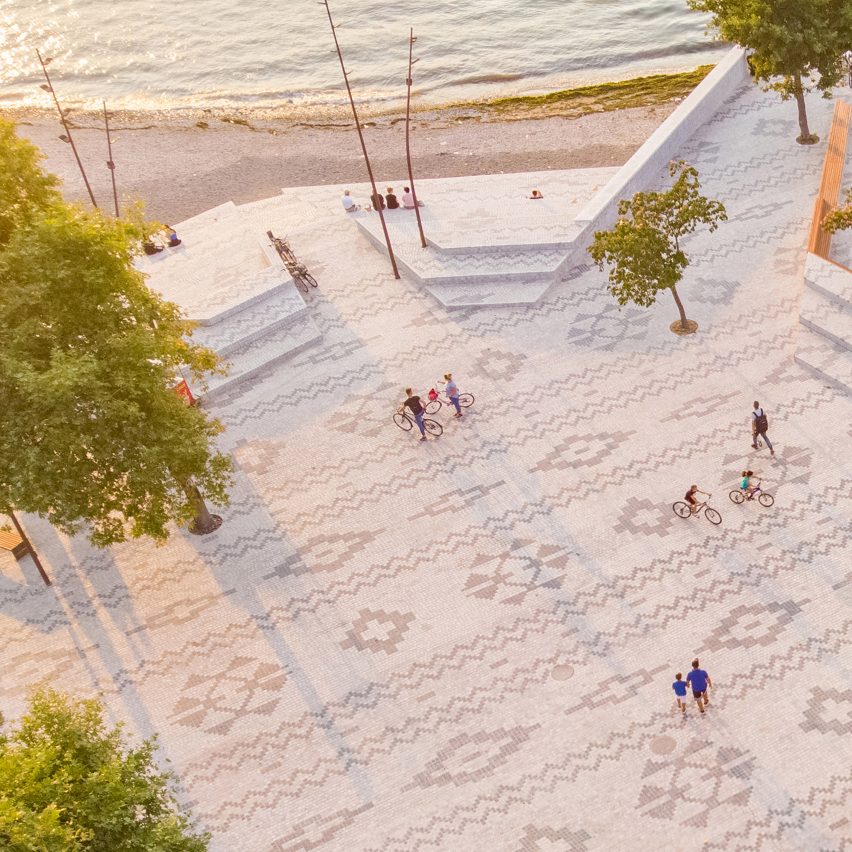 Dutch studio Casanova + Hernandez has completed a landscaping project in the Albanian village of Shiroka, comprising a waterfront plaza and streetscape that uses granite stones to replicate a traditional carpet pattern.

The Rotterdam-based studio was commissioned by the Albanian Development Fund to oversee the redevelopment of the waterfront on the shores of Shkodra Lake, which is near the border with Montenegro.

The area had been occupied by private houses, restaurants and parking areas that were constructed illegally in the years following the fall of communism in Albania in the early 1990s.

The Albanian Carpet project involved demolishing the existing structures to create Shiroka Square, a 20,000-square-metre public space from which citizens can enjoy views across the lake.

“The project not only aims to physically and functionally restore Shiroka waterfront but also to rebuild the feeling of belonging and attachment to the public space,” Casanova + Hernandez claimed.

The entire square, as well as the pavements, street and seating were constructed using black and white granite blocks laid in a pattern typical of Albanian carpets.

According to the architects, the decision to use a design based on traditional carpets was intended to lend the public space “a unique and domestic identity”.

As well as being informed by carpets, the landscaping was designed to evoke the feeling of a house consisting of rooms with specific functions, the architects said.

The layout of the open-air zones is influenced by a kind of room called an oda, which is common in traditional Albanian homes. These rooms are typically used to entertain guests and feature low benches lining the space on three sides.

“These rooms open the views over the lake and stimulate citizens’ interactions with different uses such as a playground room, picnic room, lounge room, amphitheatre and the fishermen’s room,” the architects added.

The benches are made from wood, which was also used for picnic tables and other street furniture nearby. At the apex of each seating area, the stone paving forms steps that can be used for seating to turn the central plaza into a space for performances or events.

Several existing trees around the edges of the square were integrated into the design and are joined by younger trees that will provide shade where it is required.

Shiroka Square forms part of a wider regeneration of the village’s waterfront, which focuses on improving pedestrian access and minimising traffic.

A parking area has been created at the village’s entrance to encourage visitors to walk rather than drive to the various amenities.

A further phase of the project will see the construction of the Museum of Shkodra Lake on a promontory that will extend out into the water from the square. This will advance the Albanian Development Fund’s objective to turn Shiroka into an important recreational, cultural and tourist centre.

Casanova + Hernandez previously transformed an old government building in the nearby city of Shkodra into the Marubi National Photomuseum, adding a two-storey extension with a gridded glass facade to an existing historic building.