A glazed box revealing floors wrapped in a terracotta screen forms part of this new academic facility, designed by CO Architects for a university in Kansas City.

Built on the site of a former parking lot, the Health Education Building is located on a prominent corner in the University of Kansas Medical Center campus – on the Kansas side of the state border with Missouri. It serves as the primary educational facility for the institution’s medical, nursing and allied health programs. 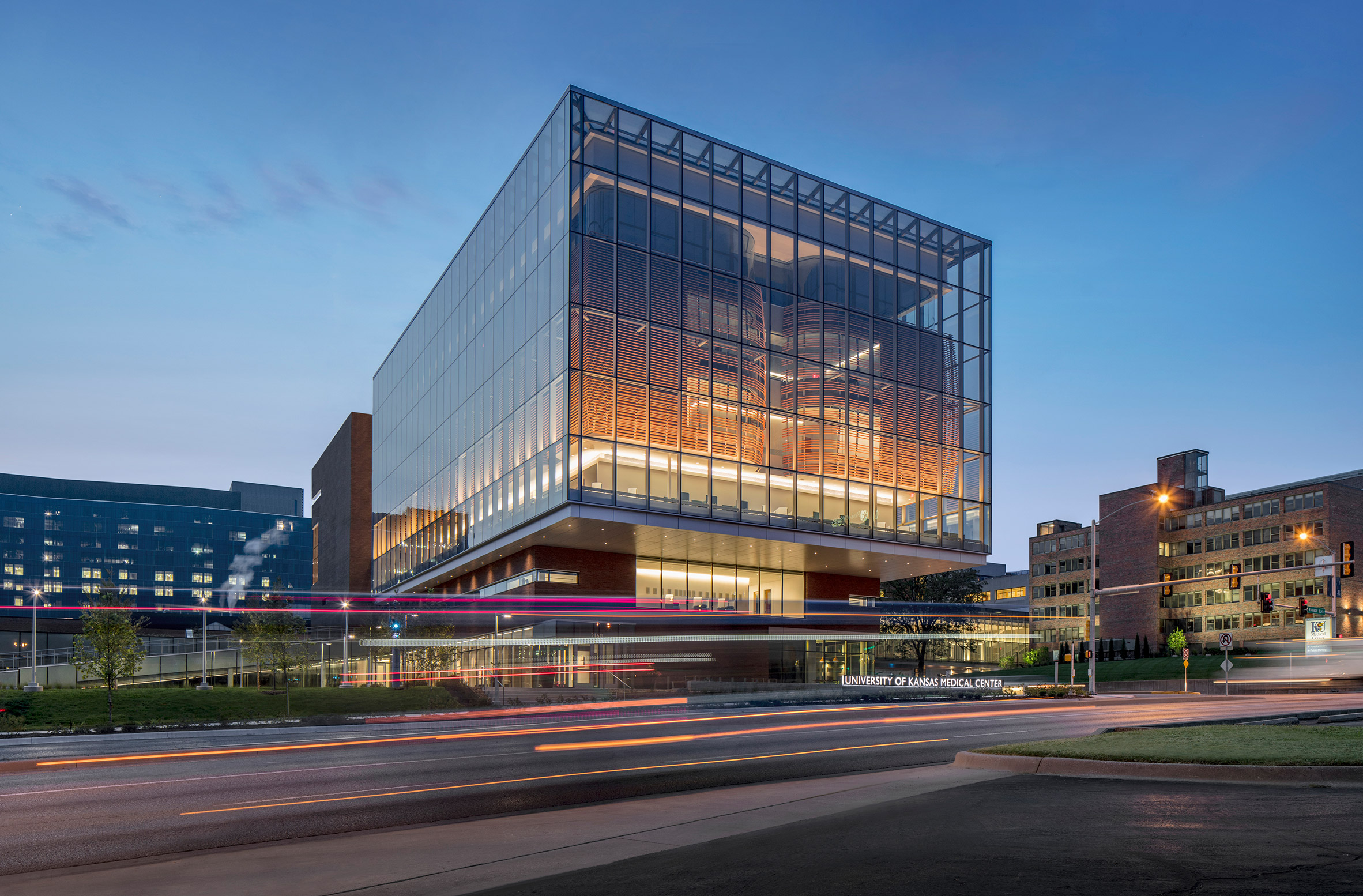 “As the campus continues to grow, the Health Education Building will emerge as the geographical centre and interdisciplinary resource among the existing concentration of clinical, research and educational buildings,” the team said in a project description. 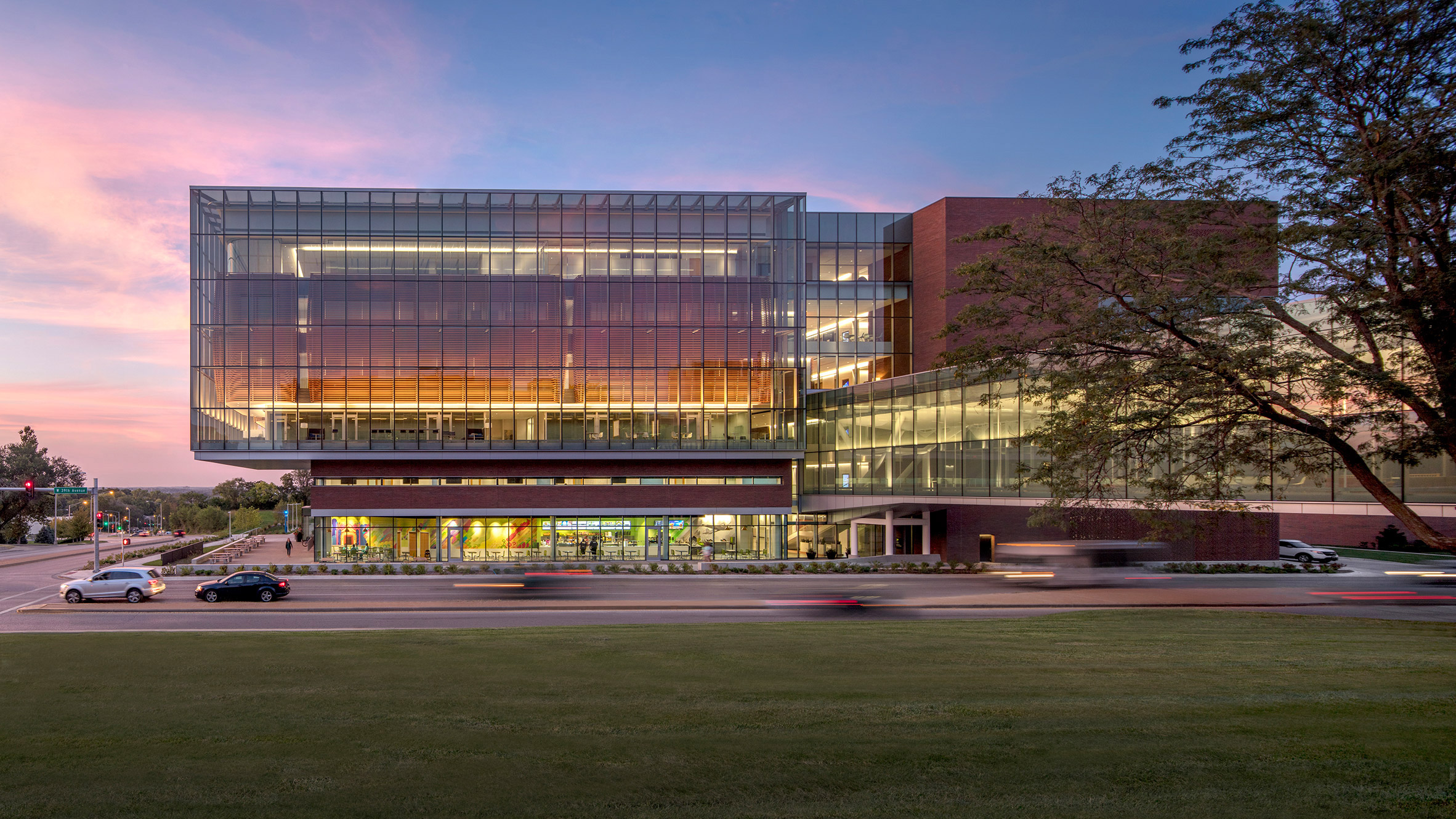 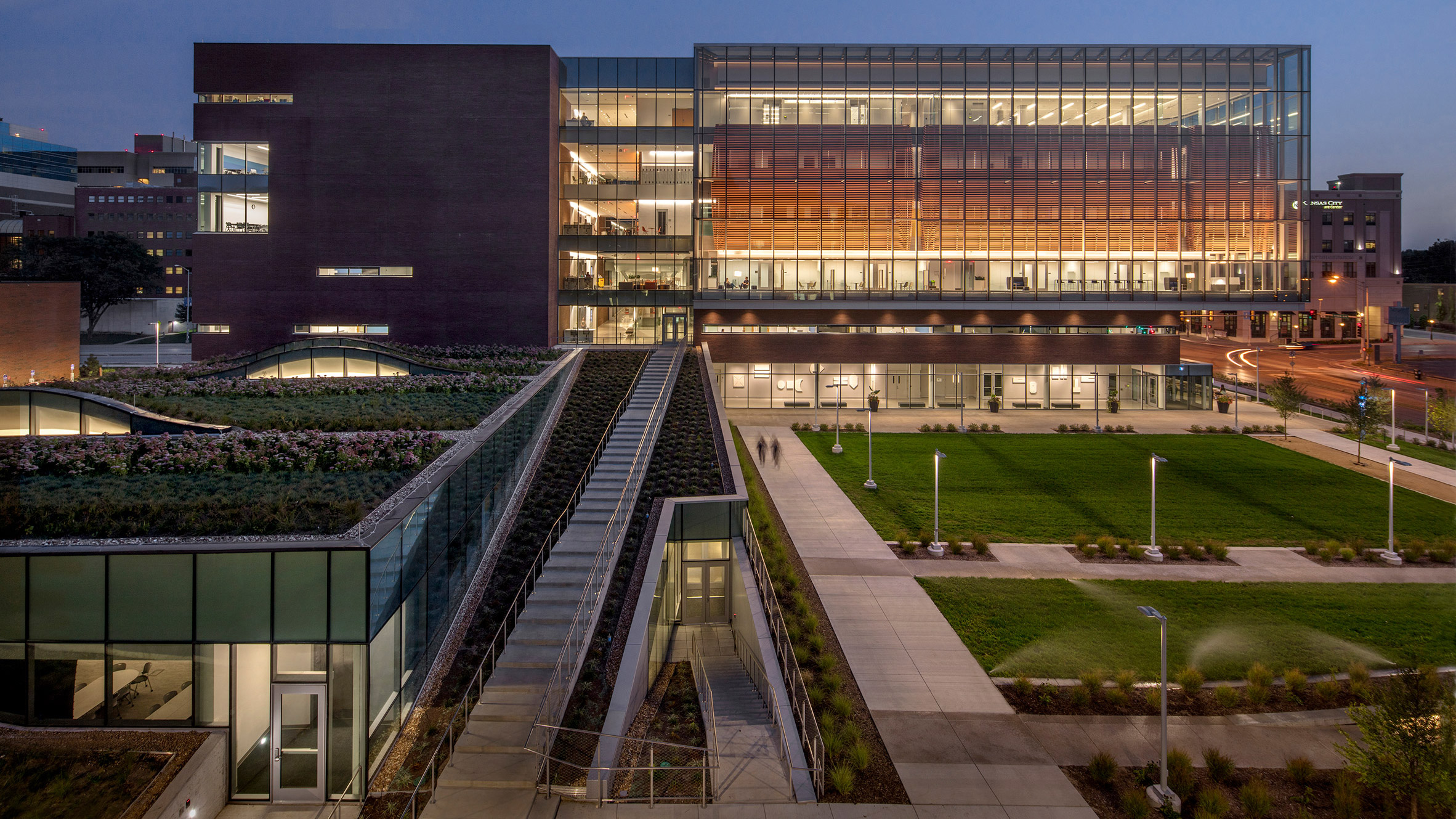 Exterior walls are wrapped in glass and reddish brick. On the west elevation, the upper level of the building cantilevers over the site and reaches toward an active street. Glazed facades provide a clear view of the interior, where volumes containing labs are enclosed in a terracotta screen. 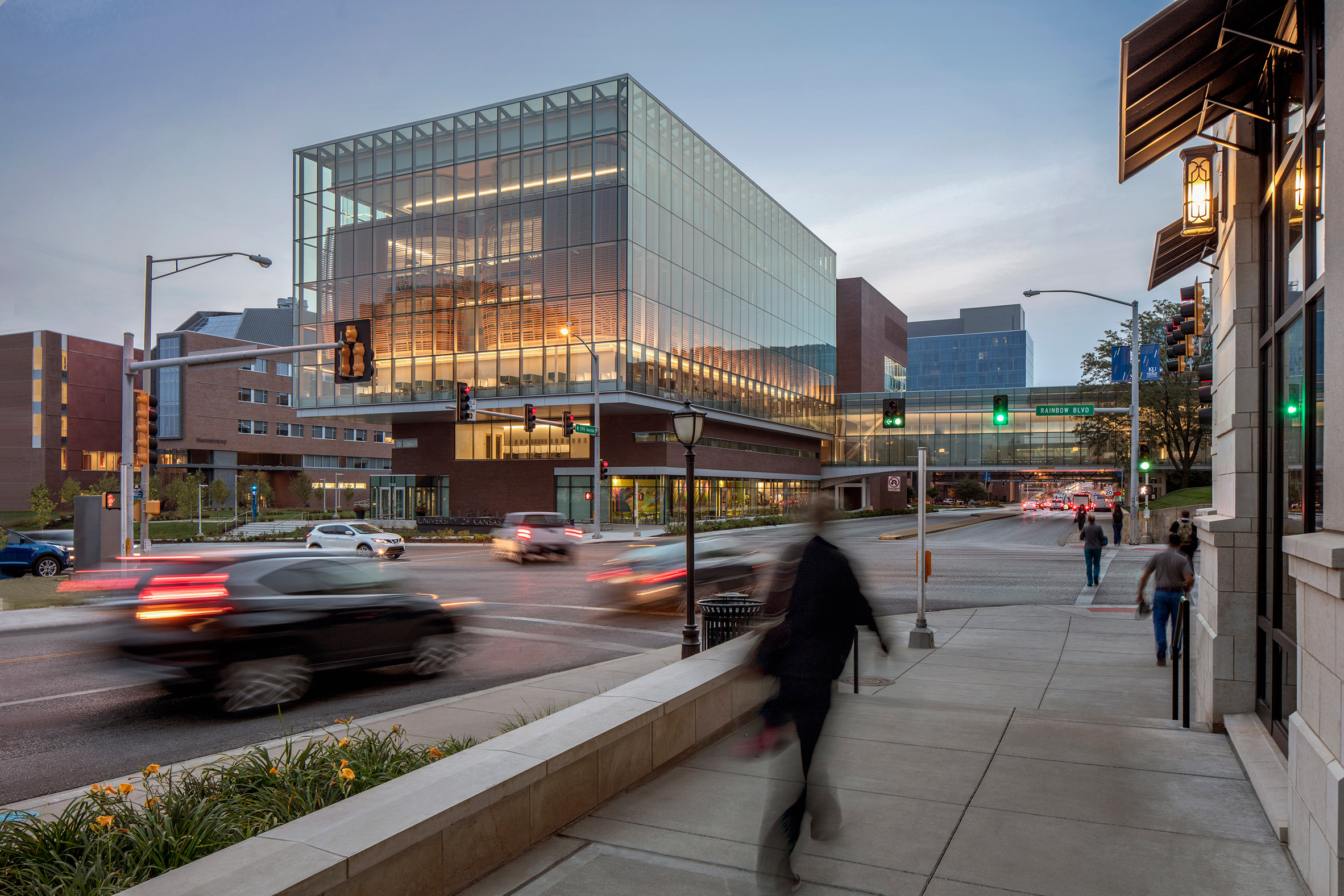 “The cantilevered west wing acts as a lantern, providing daytime and illuminated night views of the advanced simulation labs that appear suspended inside the building,” the team said.

“The curving terracotta and glass enclosures of the simulation spaces invite metaphorical interpretations for human organs within the skin surrounding them, and symbolise the hands-on, progressive curriculum taught in the building.” 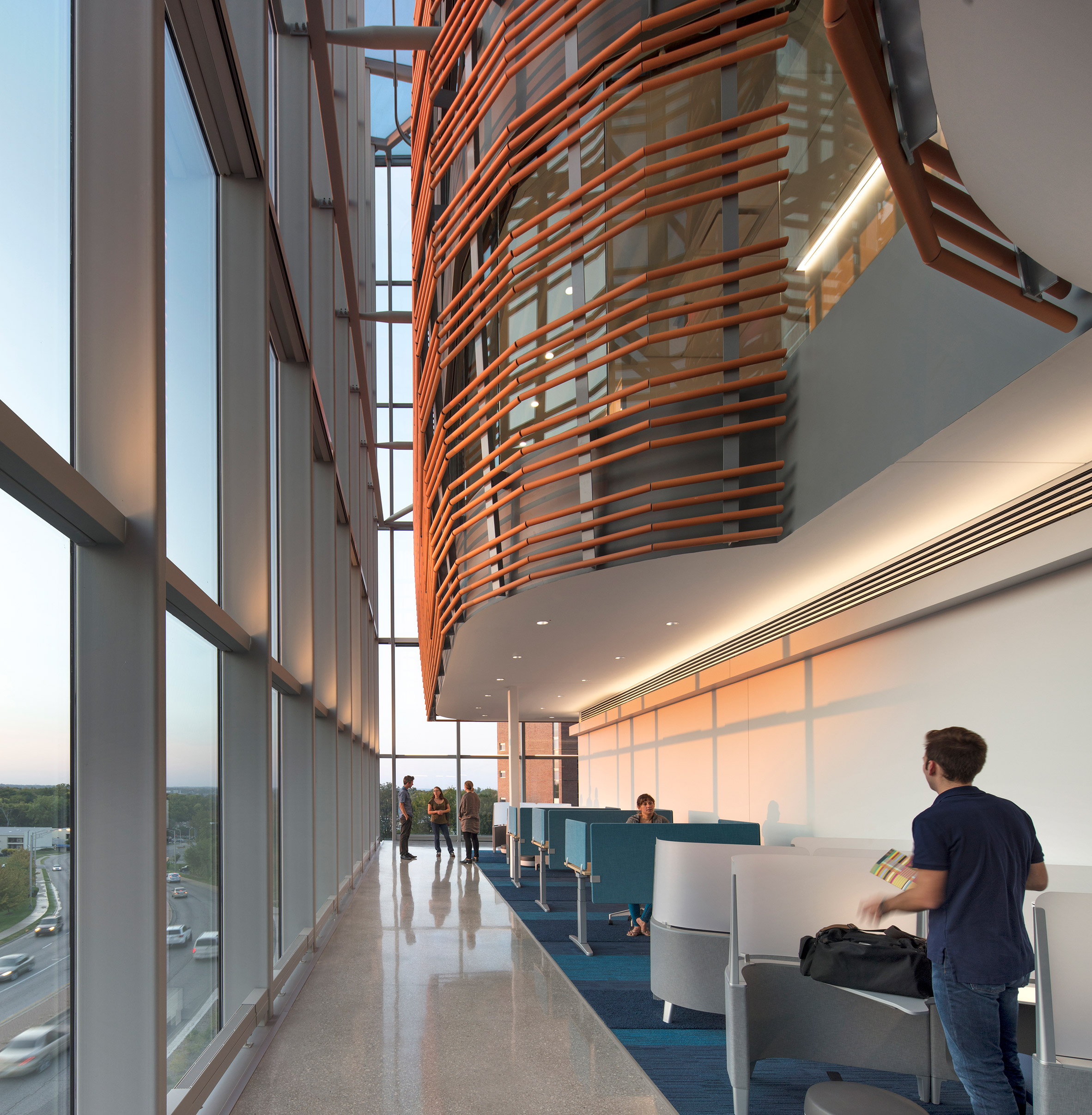 The eastern elevation, which is more opaque, features Roman brick cladding – a material the takes cues from the traditional masonry found on campus. On the ground level, the brickwork “appears to dissolve into a lattice-like screen that runs past windows, providing views into the large learning studio inside”. A similar strategy was used at the top of the building for mechanical purposes. 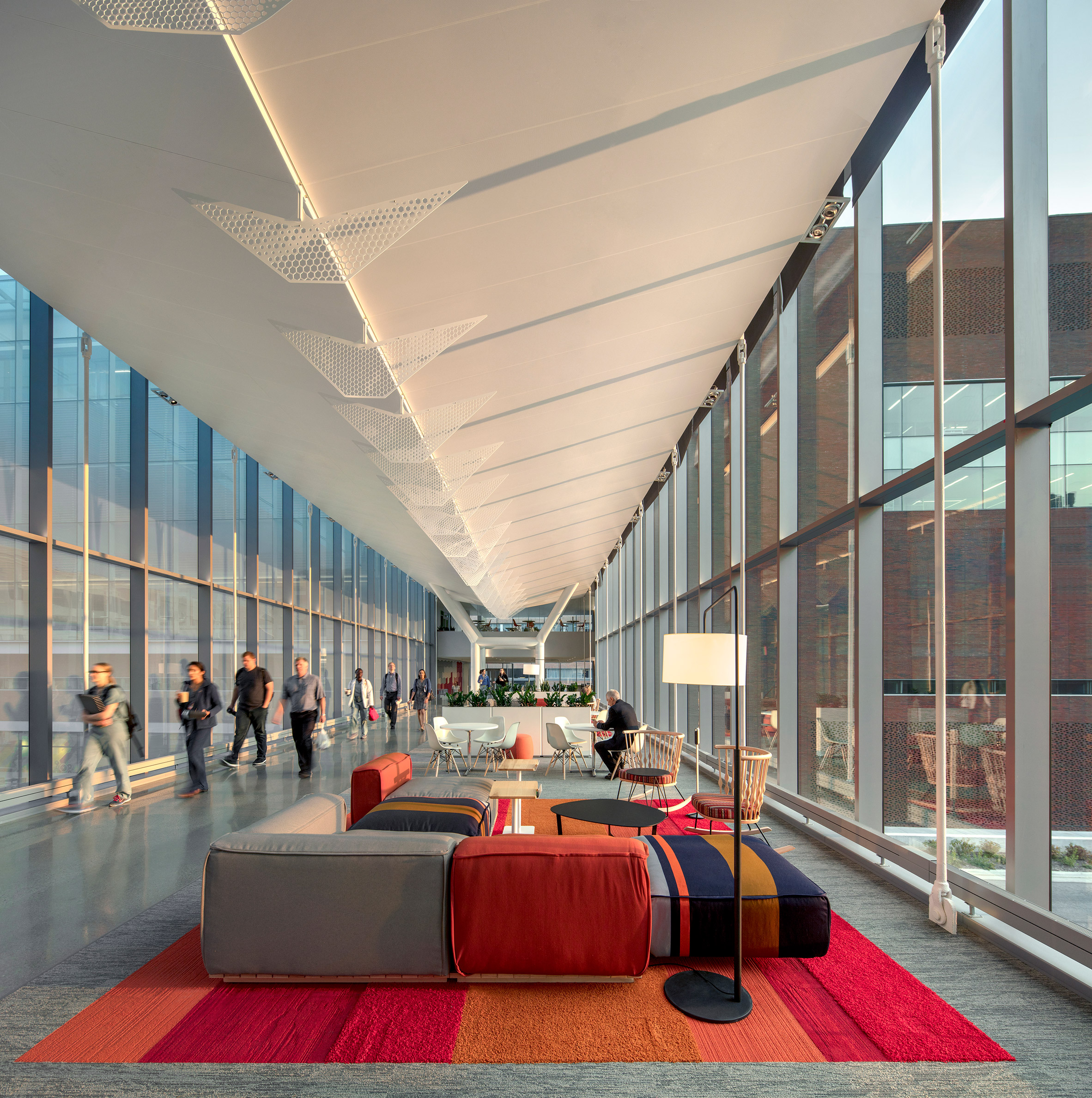 The north side of the building features a sloping walkway, which leads to another research building and parking facilities. The team incorporated a landscaped courtyard that was influenced by the grass-covered Flint Hills region in eastern Kansas. Condensate water from the building’s mechanical system is used to irrigate the landscaping.

Conjoined to the south side of the building is a glass-enclosed bridge, which passes over a street and connects to Orr-Major Hall, a brutalist-style educational building constructed in the 1970s.

Spanning 250 feet (76 metres), the glazed bridge is meant to function as both a “pedestrian conduit and social destination”. The interior offers space for studying and socialising. Large, tree-shaped columns provide structural support and visual interest.

The entire building offers a diverse mix of formal and informal spaces that encourage collaboration and interdisciplinary approaches to problem-solving. 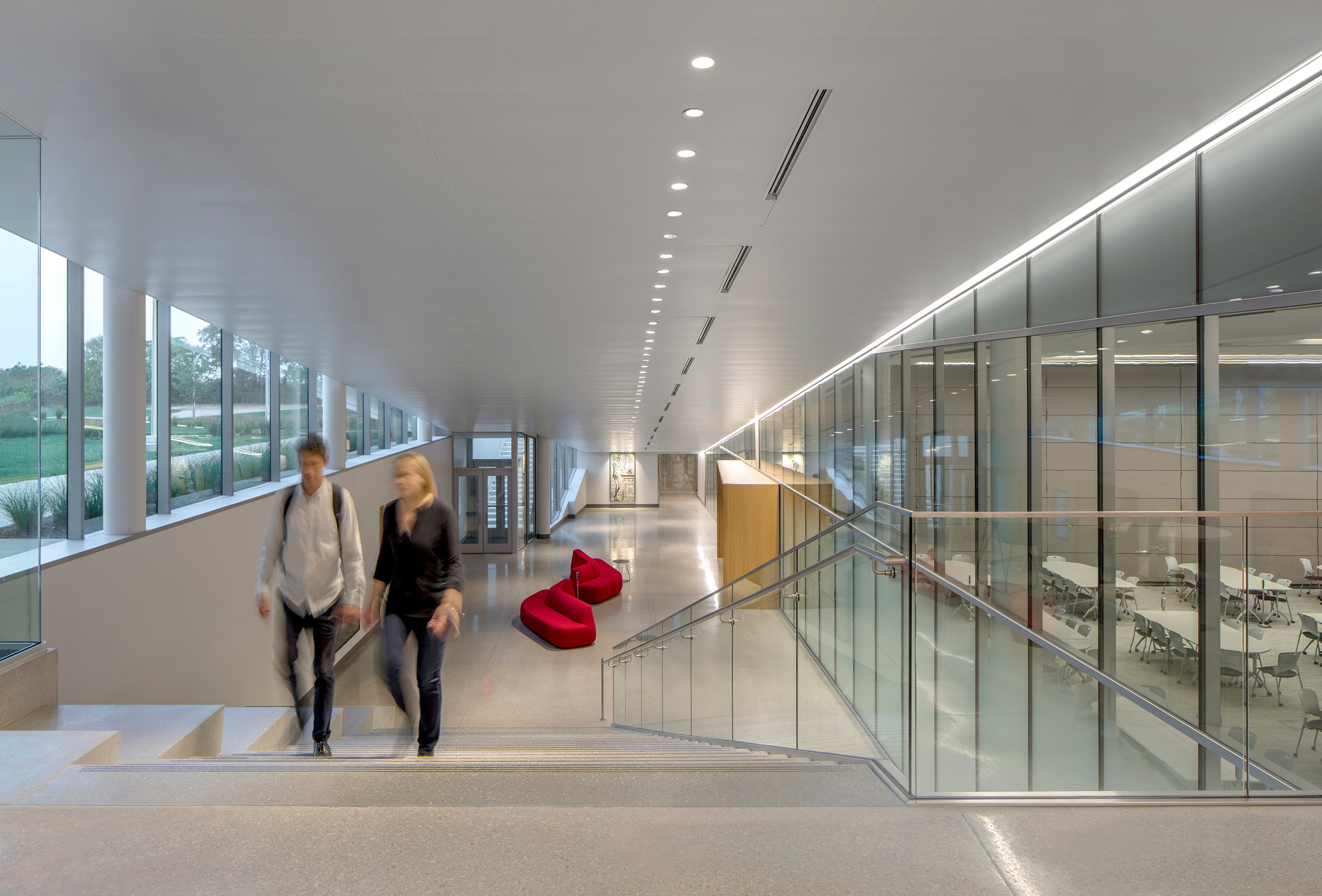 “Each floor of the building is designed to promote a sense of student camaraderie, community and teamwork,” the team said.

The first and second storeys house 15-person tutorial rooms, four-person study rooms and one-person carrels. Classrooms and learning studios – including mock medical environments, such as operating theatres – are located on floors one through four. Faculty offices are situated on the third and fourth levels, while a large event space was placed on the fifth floor. 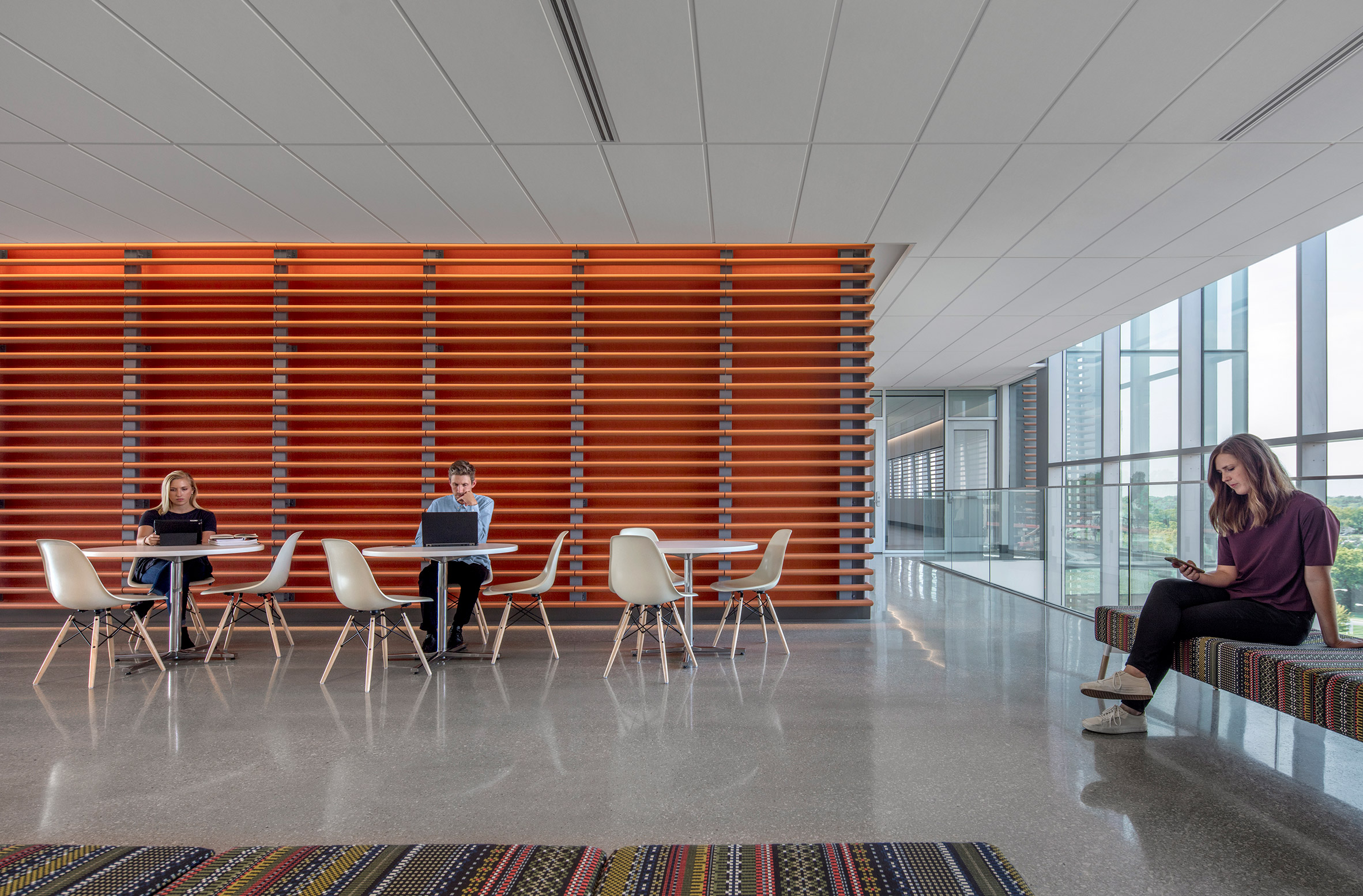 The central volume serves as a circulation hub, providing access to elevators and stairs. Retail spaces help activate the base of the building.

The centre has a number of sustainable features, including LED lighting and occupancy sensors that help control heating and cooling. Skylights that project above the ground on the north side bring natural light to learning studios in the basement level. 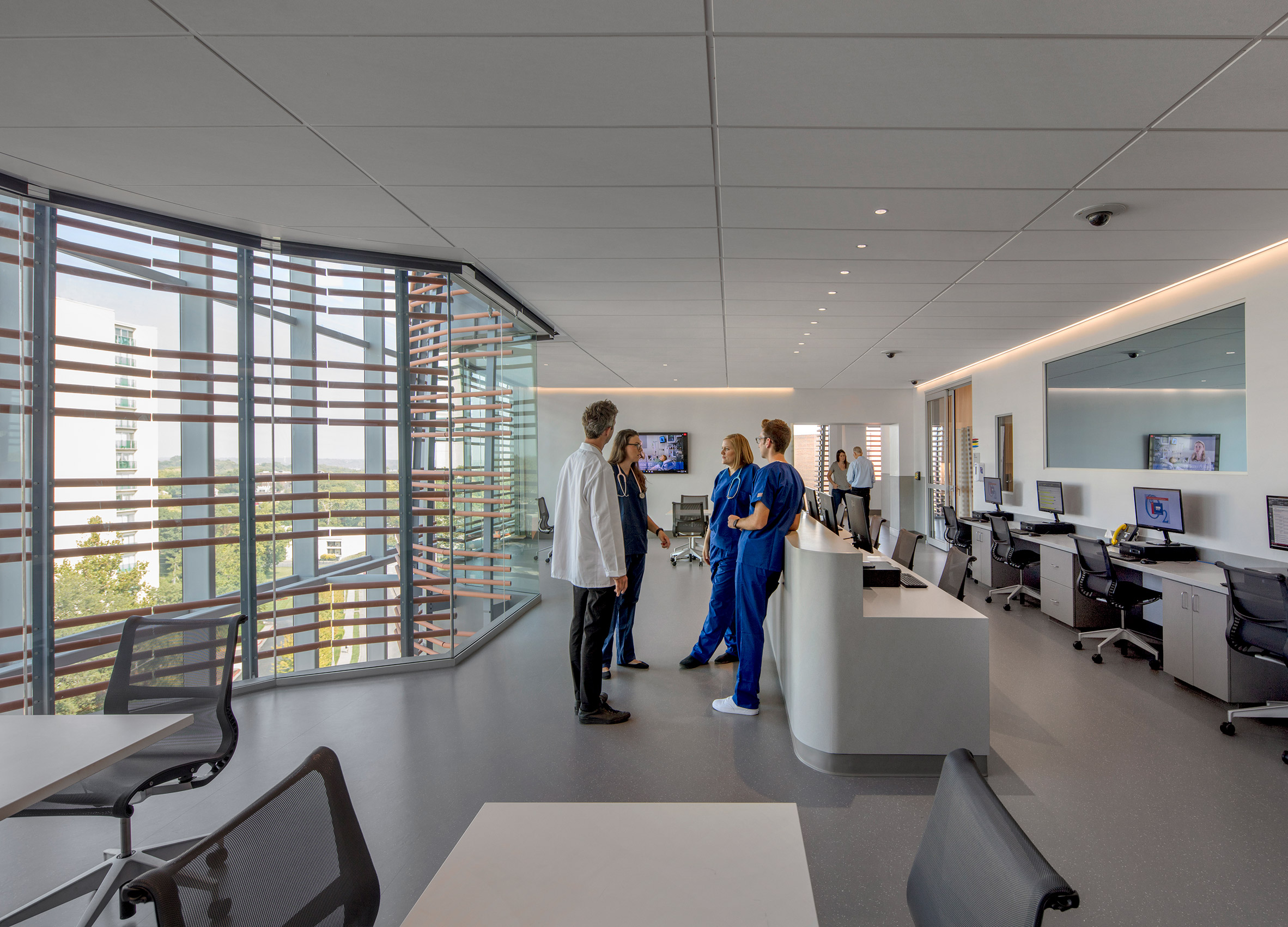 On the west side, a semi-conditioned thermal buffer is created between the exterior glass walls and the interior terracotta screen. This buffer cuts down on energy use while still providing views and daylighting.

Overall, the university building is expected to consume 24 per cent less energy than mandated by the state energy guidelines, according to the team. 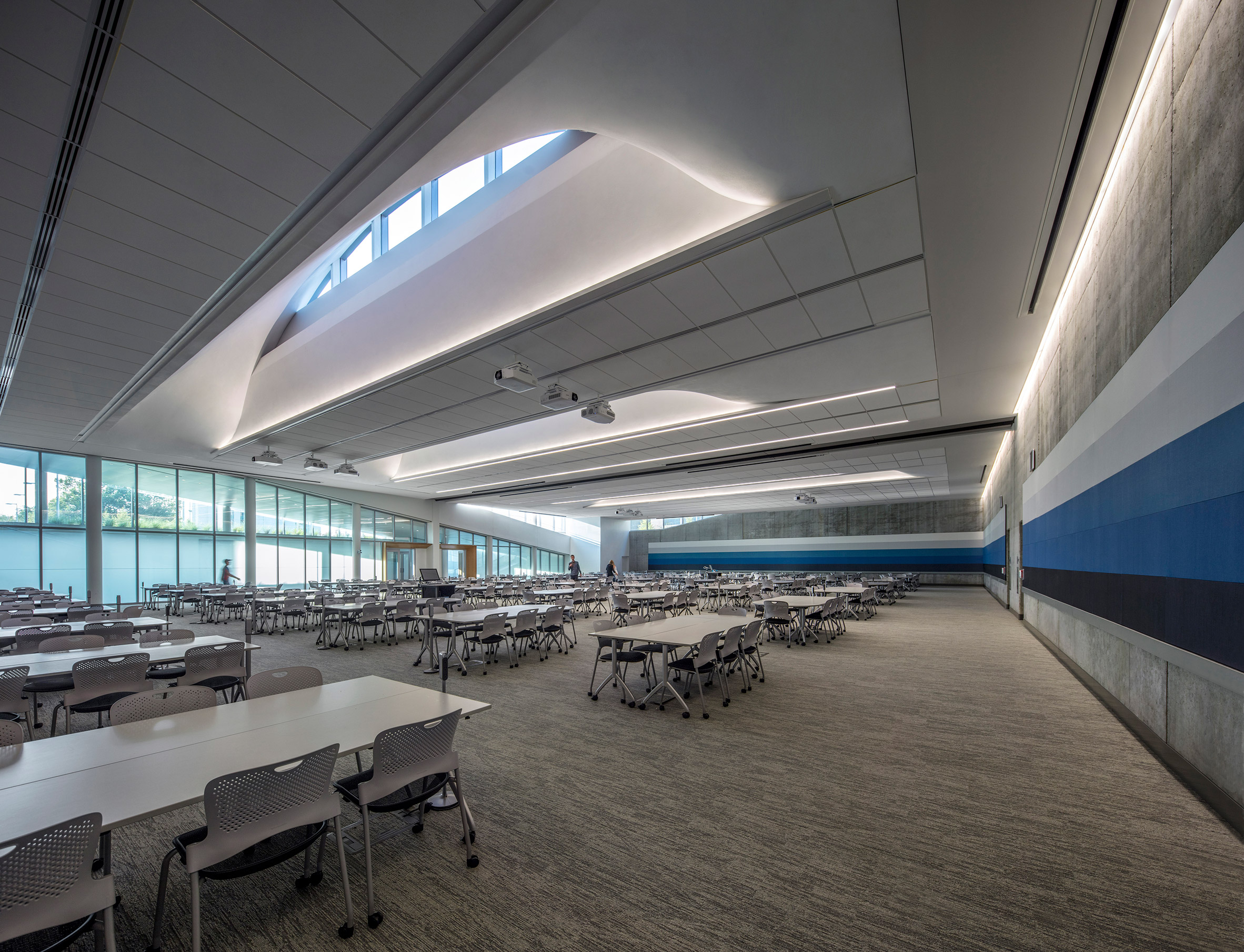 CO Architects was founded in 1986 as a regional office of Anshen + Allen (now part of Stantec) and became an autonomous firm a decade later. Another academic project by the California firm is a copper-clad laboratory complex in downtown Phoenix that evokes jagged and striated rock formations.

Photography is by Bill Timmerman.