Cubículo Arquitectos has added extra storage to a Porto apartment, by installing custom-built cupboards and shelves around the old structural columns.

Situated on the first floor of a housing block, Apartment Largo Soares dos Reis belongs to a graphic designer, who shares the flat with her mum and younger brother.

The family tasked Cubículo Arquitectos, with improving the internal arrangement of their home, which was “exaggeratedly divided, disproportionately dimensioned and functionally inadequate”. 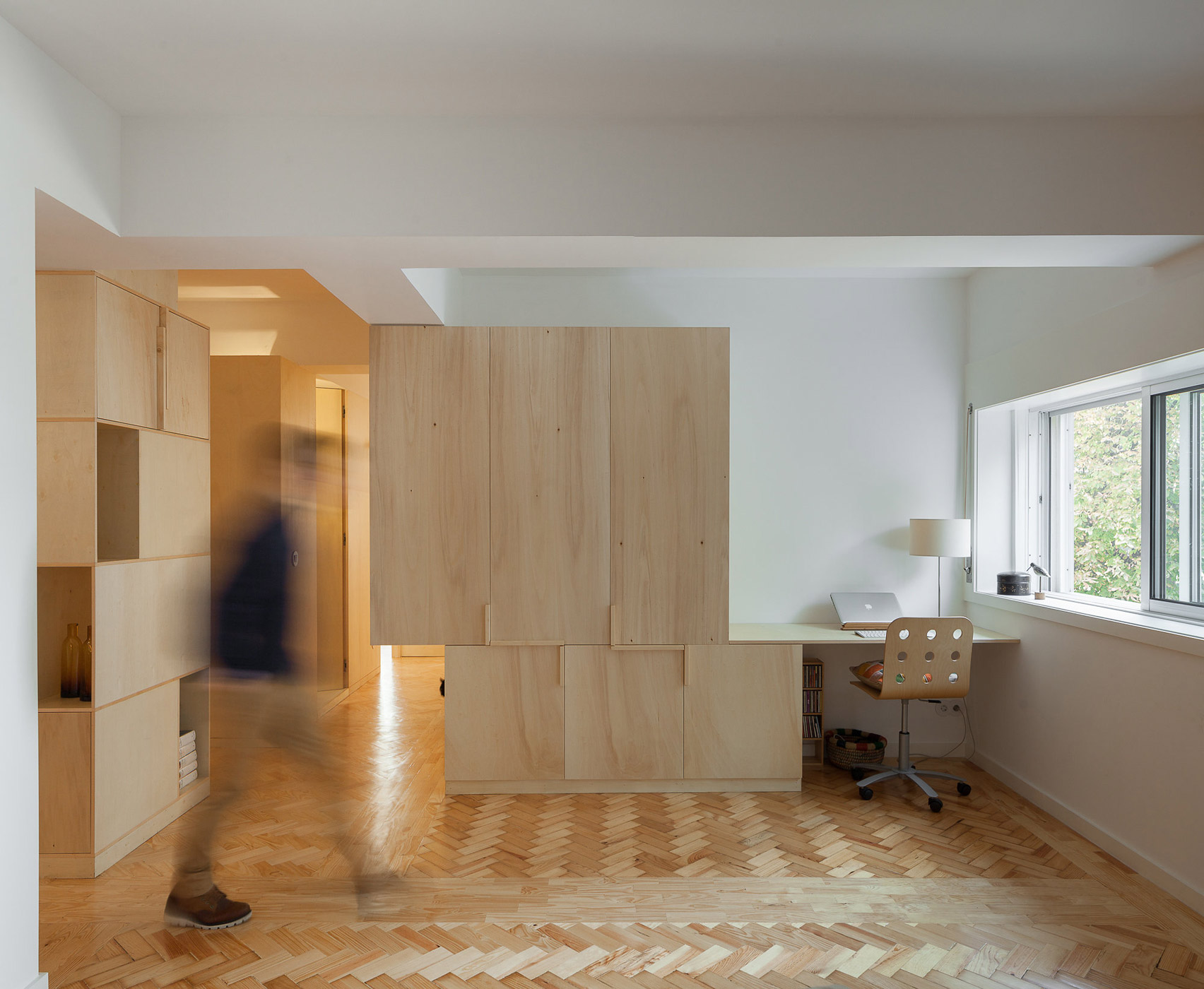 Before embarking on the renovation, the architects noted that the property had two distinctive features worth preserving and highlighting.

The first was the herringbone-patterned pine wood flooring, while the second was the structural beams and columns that appear intermittently throughout the home. 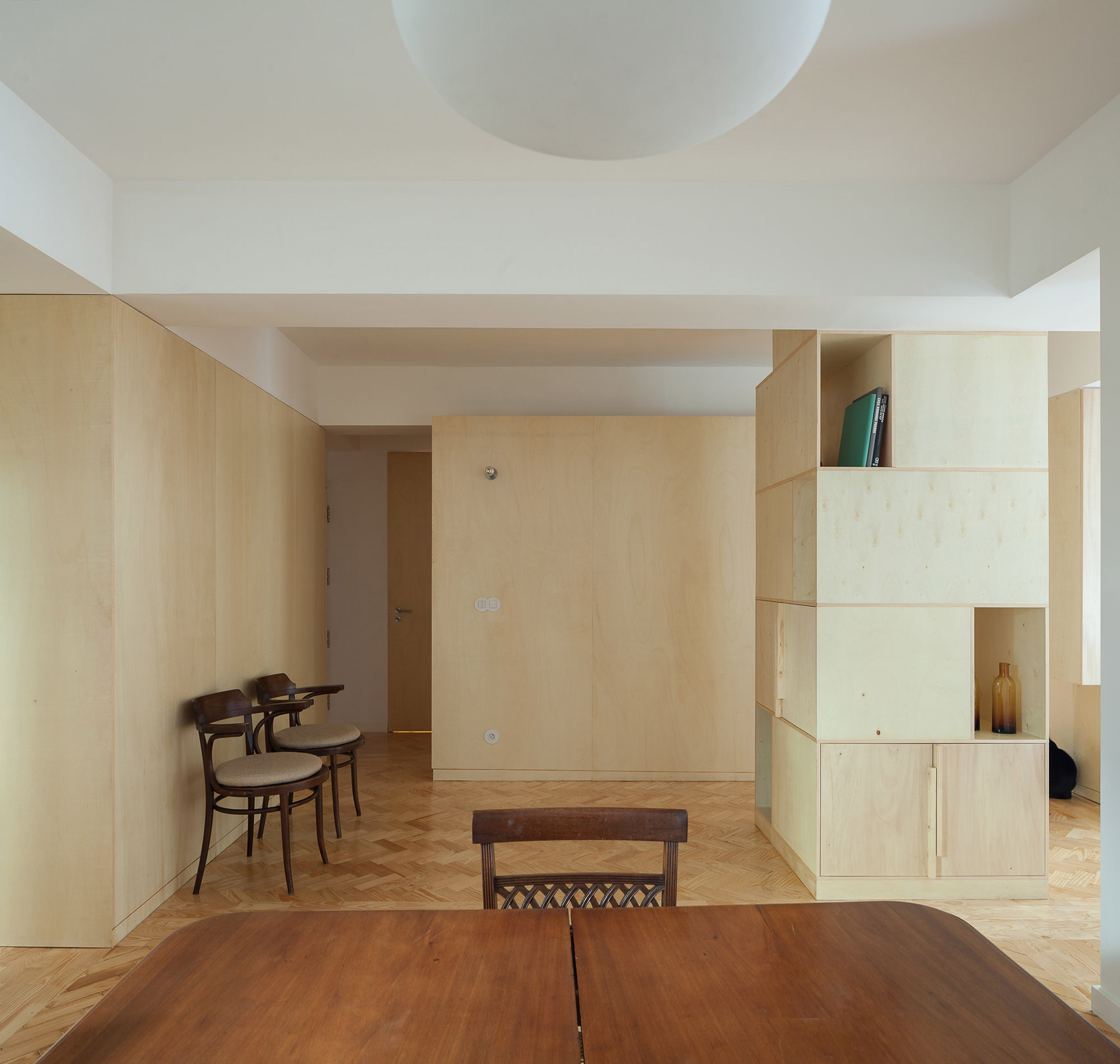 Using birch plywood, the architects planned cupboards that wrap the support columns and turn them into “storage walls”.

These cupboards are installed in the kitchen, bedroom, and along the periphery walls of the apartment’s main living space. Visual interest is added with custom-made, blocky door handles and open shelves that can display the family’s ornaments. 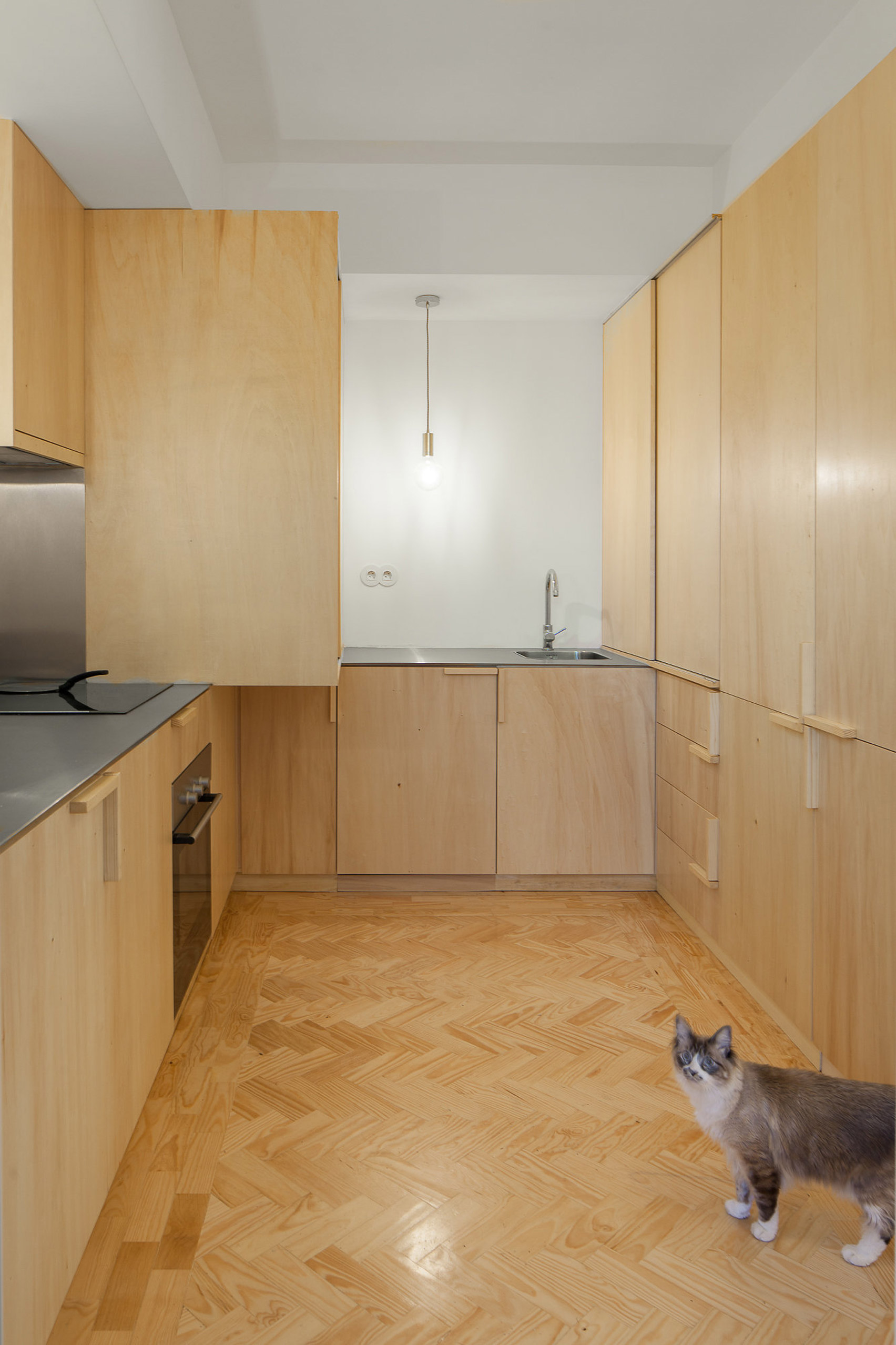 For the second phase of the renovation, Cubículo Arquitectos knocked down four partition walls to create an open-plan lounge and dining area that includes a small study area. 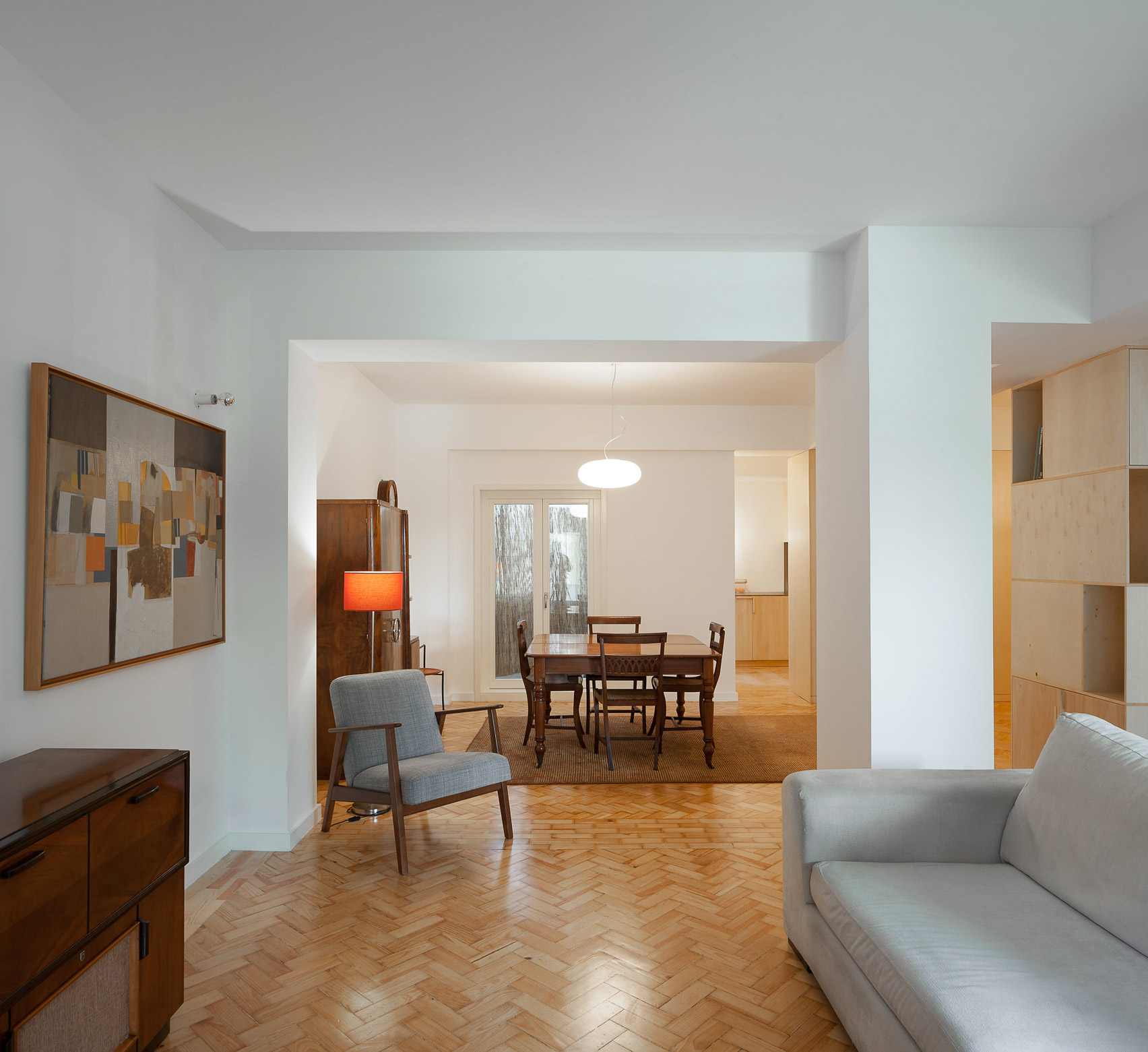 When it came to decorating the interiors, the architects kept it simple, making use of the family’s own furniture.

“We were fortunate that [the client] has an architectural tradition in their family, so the furniture settled well in the apartment,” the architects told Dezeen. 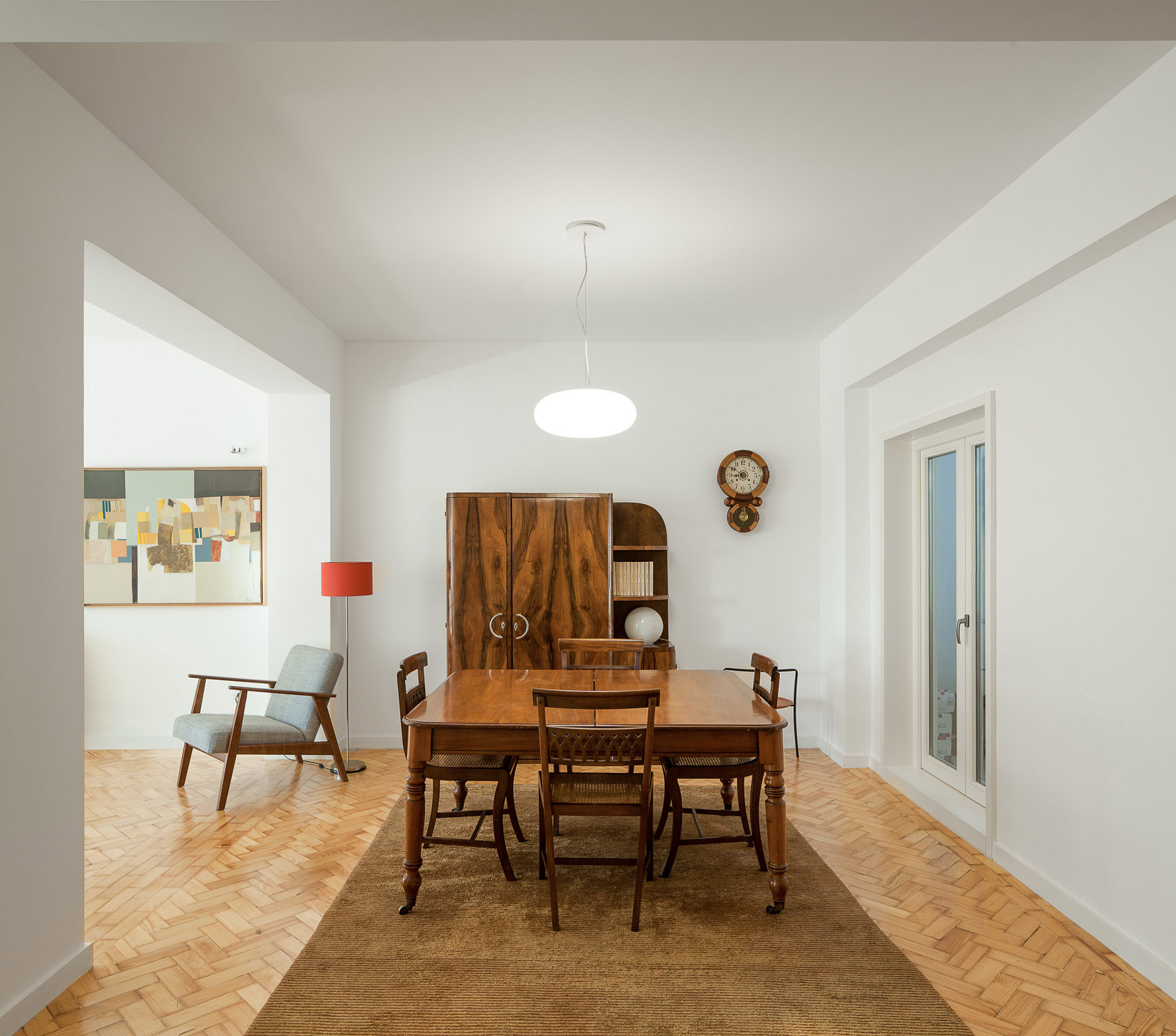 It is among several practices who have recently used storage to transform residential spaces. Fala Atelier installed deep-blue cabinetry to conceal the kitchen, windows, and wardrobe of a Porto flat, while Another Studio traded walls for customised shelving units to turn a Bulgarian apartment into a workspace.