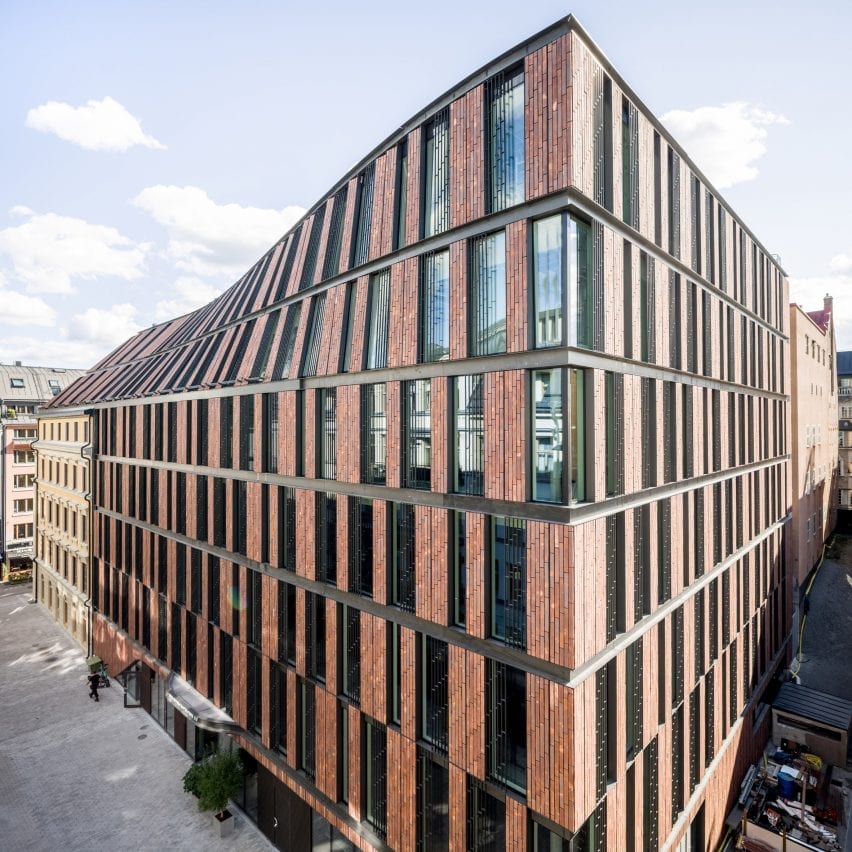 3XN oversaw the renovation of the Astoriahuset building in Stockholm’s historic Östermalm district, along with the design of the connected office building at Nybrogatan 17.

The multi-storey Astoriahuset building dates from 1874 and was built to house residential apartments. Prior to the restoration project it had been used as offices and a cinema.

3XN converted the building back into 18 apartments arranged over five storeys, and introduced a restaurant on the ground floor with its lobby housed in the former cinema foyer.

The new Nybrogatan 17 office block was designed to complement its historic surroundings. The building’s form, materials and architectural details aim to reinterpret the area’s architectural style in a modern way.

“We put a lot of effort into designing the brick facade, steel ornamentation and roof form to give Nybrogatan 17 an authentic patina and tactility that creates a thoughtful connection to the neighbourhood – and not least to the adjoining Astoriahuset,” said 3XN senior partner Audun Opdal.

The choice of red-brick cladding references buildings with similar facades in the neighbouring streets, but a custom brick made with a darker tone of clay helps give the building a contemporary quality.

The brick facades are broken up by horizontal beams that express the floor plates of the different levels. Decorative steel screens positioned in front of the windows feature a pattern that references the staggered brickwork.

The brick extends across the six upper storeys. On one side, the vertical surface sweeps down to merge seamlessly with the roof of the Astoriahuset, creating a kind of saddle roof that adds dynamism to the form.

Inside Nybrogatan 17, a full-height atrium topped with a glass roof provides a visual connection between the floors and allows light to penetrate deep into the building.

The atrium contains a spiral marble staircase connecting all of the levels. The staircase is designed as a sculptural centrepiece that promotes interaction between people as they move around the building.

“Our research shows that interaction is much more likely in stairs compared to elevators,” added 3XN founder and creative director, Kim Herforth Nielsen.

“Hence, we added more value to the building in creating a holistic and comfortable environment where people can feel that they are a part of something greater.”

Nybrogatan 17 is designed to provide a range of workplace environments, including traditional offices and co-working environments that support different ways of working.

3XN was founded in Aarhus, Denmark, in 1986, and now operates globally.

The firm’s completed projects include a cube-shaped office block with faceted glass facades in Berlin, and a headquarters for the Olympic and Paralympic Games in Lausanne, Switzerland.

Photography is by Rasmus Hjortshøj.