A pink pigmented concrete building designed by David Chipperfield’s studio for a cemetery in the Japanese town of Inagawa has been captured in photographs by Edmund Sumner.

Inagawa Cemetery is situated on a hillside in the Hokusetsu Mountain Range of the Hyogo prefecture, around 25 miles north of Osaka. 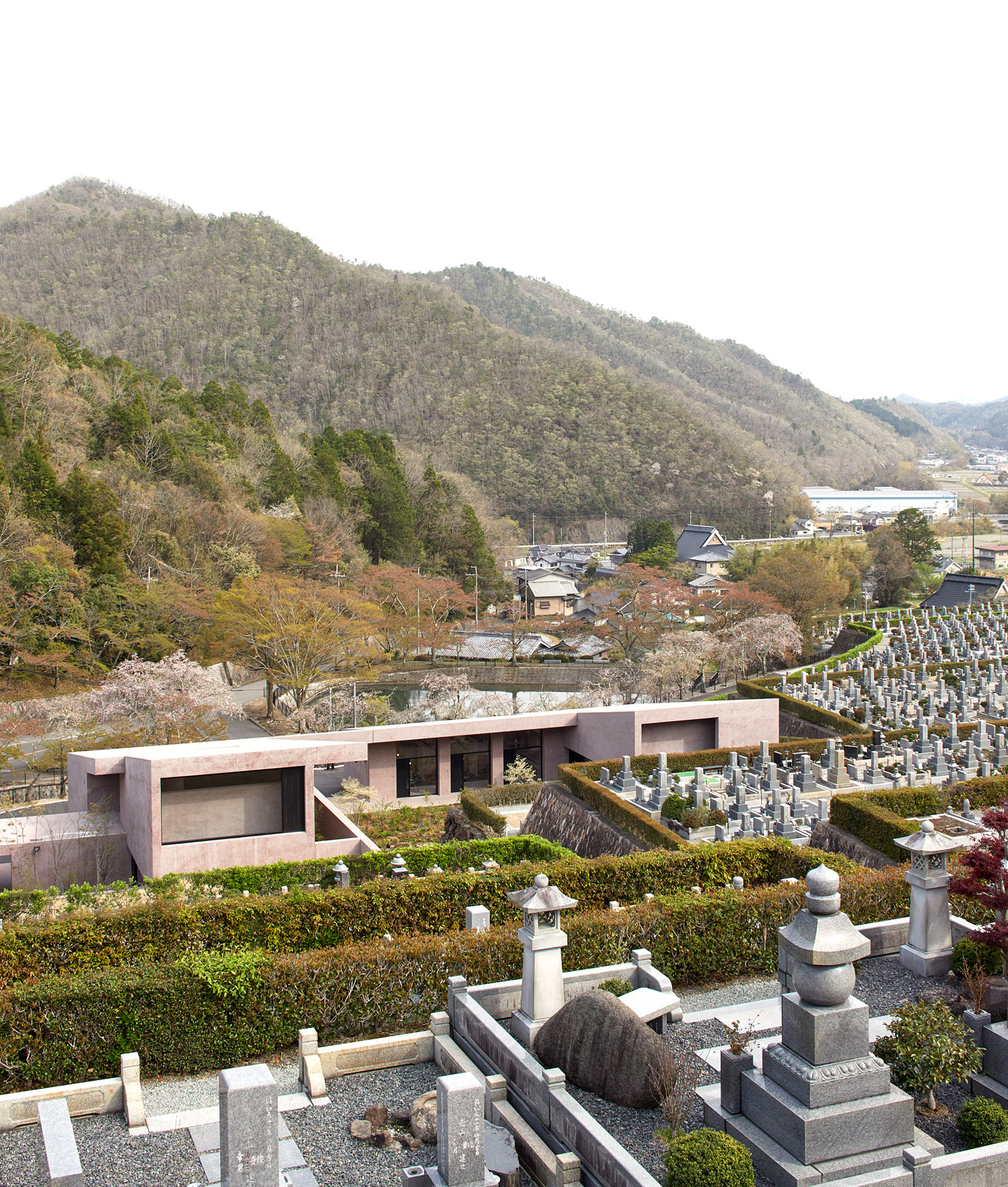 David Chipperfield Architects developed the visitor and chapel for a plot at the entrance to the site, which also contains a warehouse by Tokyo studio Key Operations made from charred and red-dyed cedar cladding.

The new building is arranged around a courtyard at the base of the hill and aligns with a monumental flight of steps that forms an axis leading up the terraced hillside to the shrine. 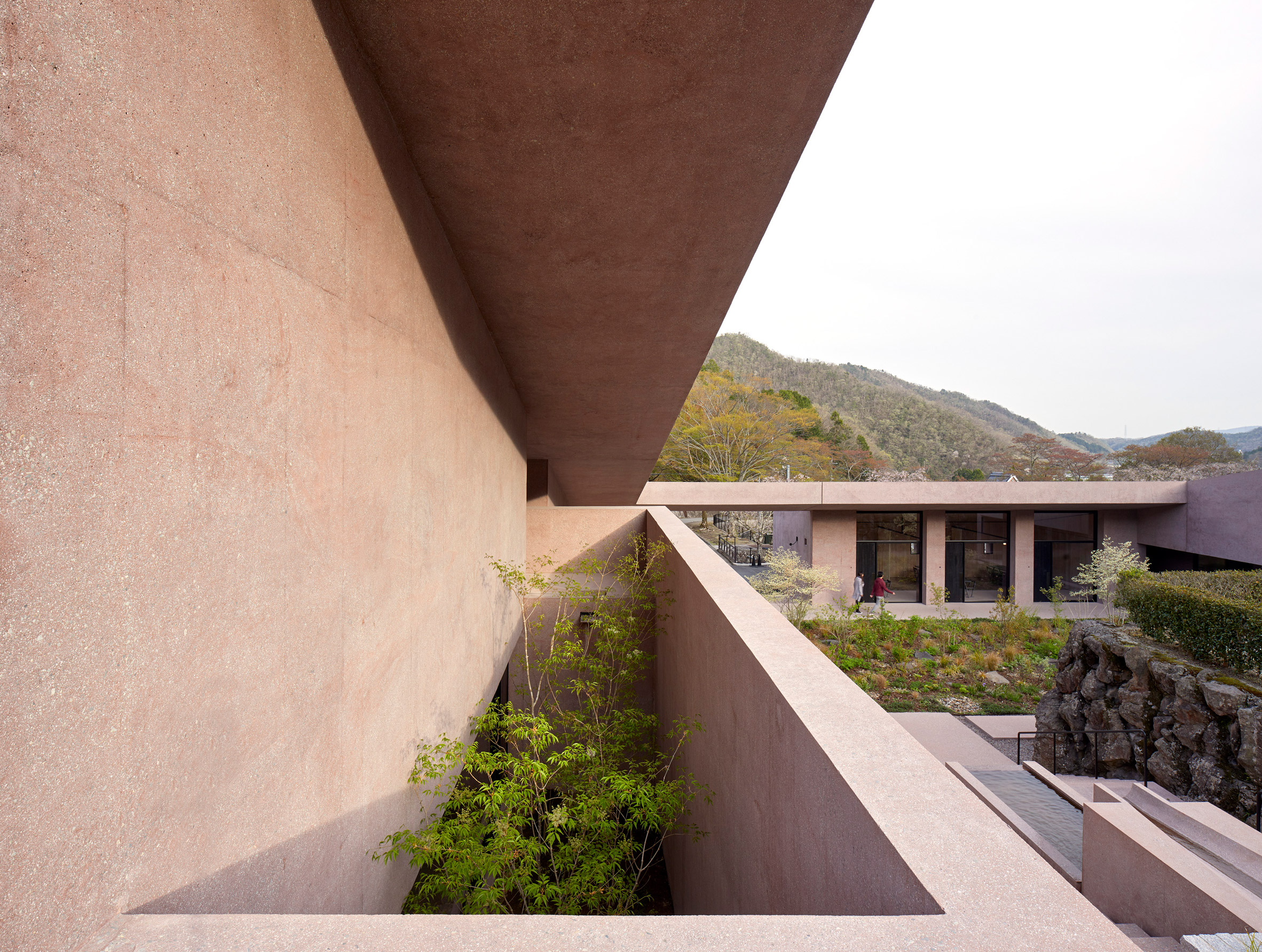 A large portal in the stepped southeast facade frames a view up the hillside as visitors approach, while the gently sloping roof ensures the building doesn’t dominate its setting.

“The visitor centre and chapel are designed as a marked threshold between the outer world and a quieter space within for contemplation,” said the studio.

All of the facilities are sheltered beneath the inclined roof, which guides the line of sight towards the shrine further up the hillside. 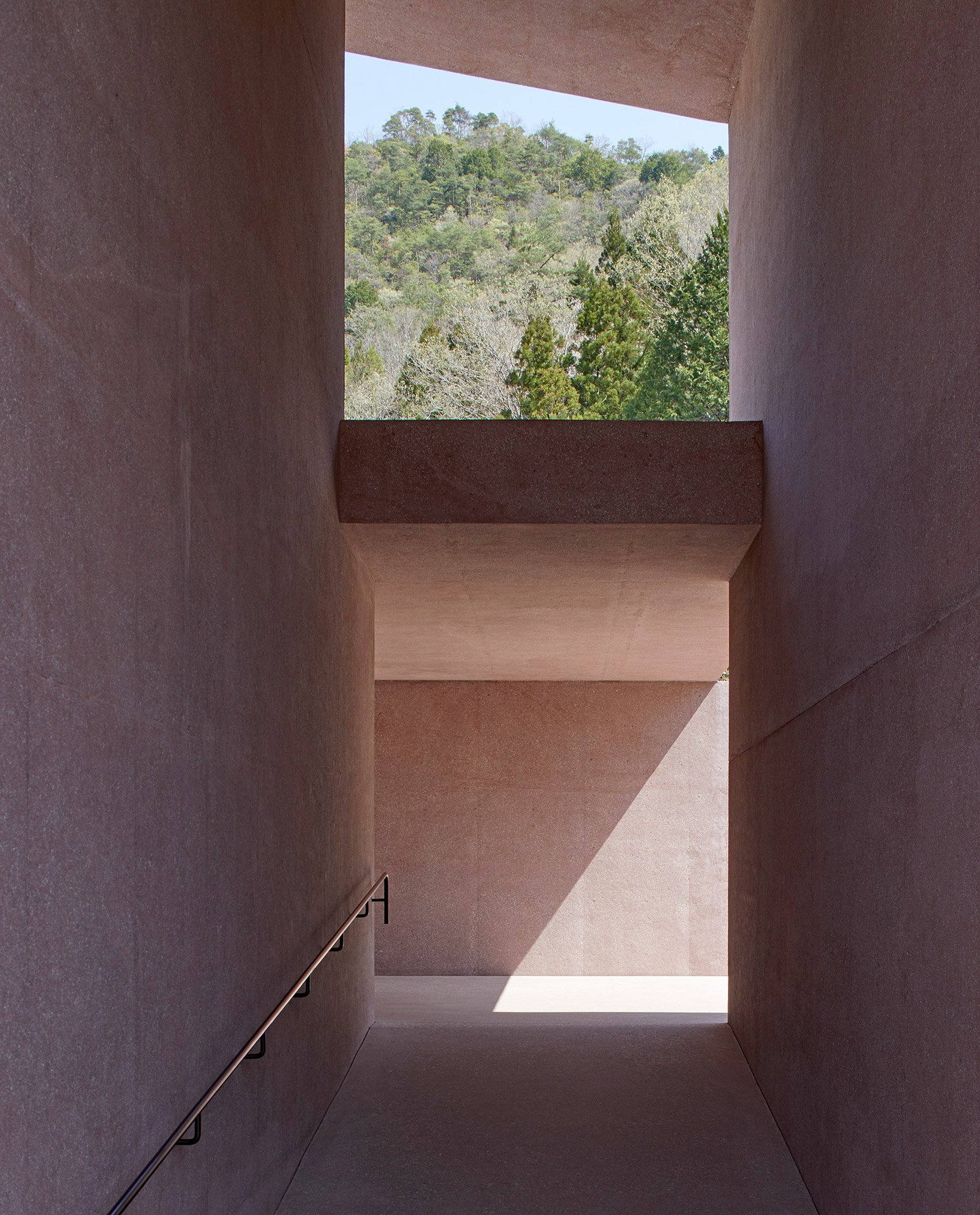 The large opening facing the road leads into a central courtyard flanked by the rooms of the visitor centre. Full-height windows maintain a visual connection between these interior and exterior spaces.

The chapel is separated off to one side and can be accessed using a small corridor from the courtyard. An external side passage and a ramp connecting it with the garden provide alternative entrances.

The simply furnished space is flanked by large windows on either side that look out onto small gardens. 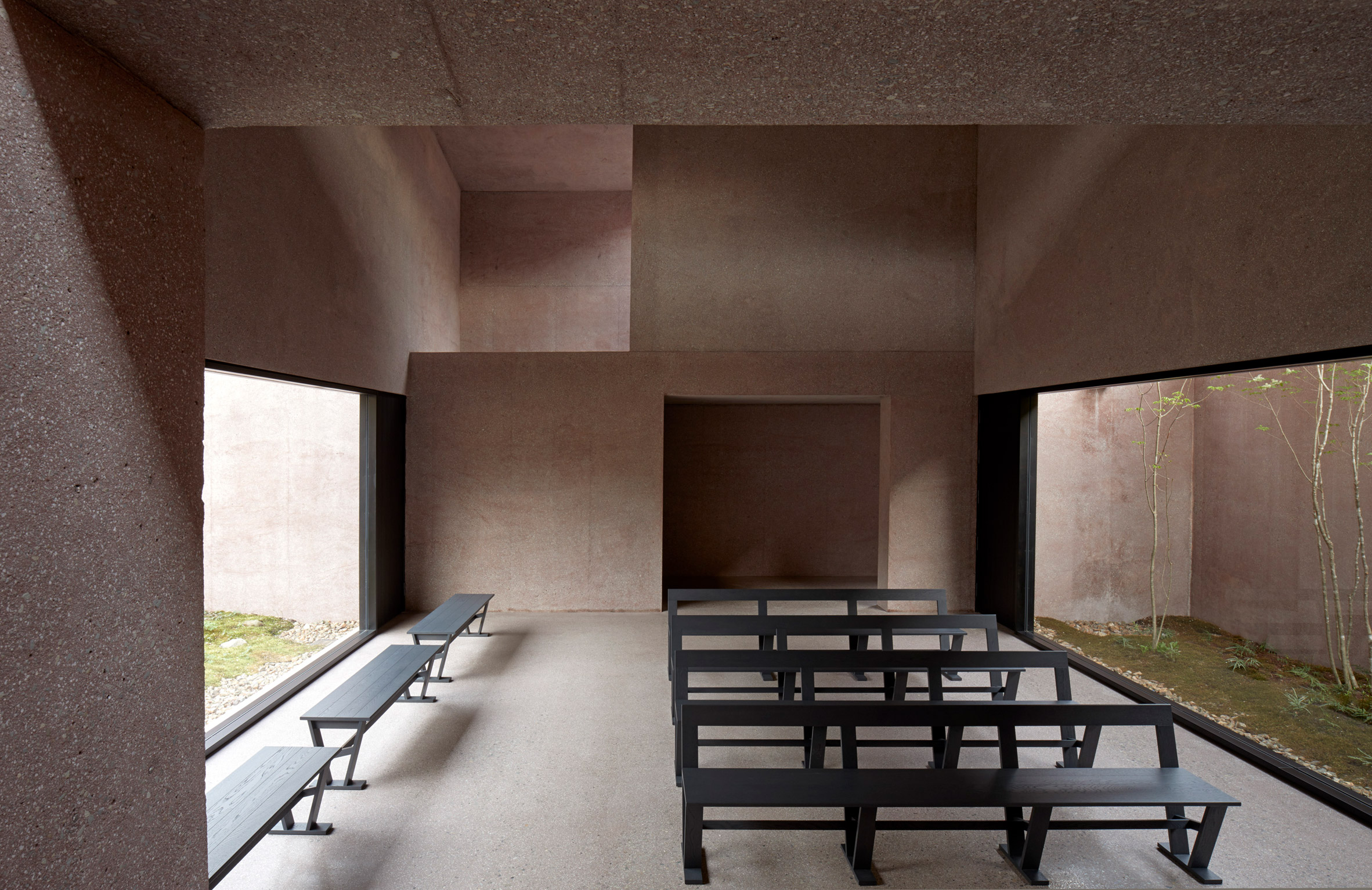 “An unadorned and quiet room with minimal heating and artificial lighting offers a non-denominational contemplative space, pure in its form,” the studio described.

“Relying on indirect sunlight from the gardens on either side, the chapel visitor finds seclusion and their focus is drawn to the essential rhythms of time through the natural indicators of daylight fluctuation and seasonal foliage changes.” 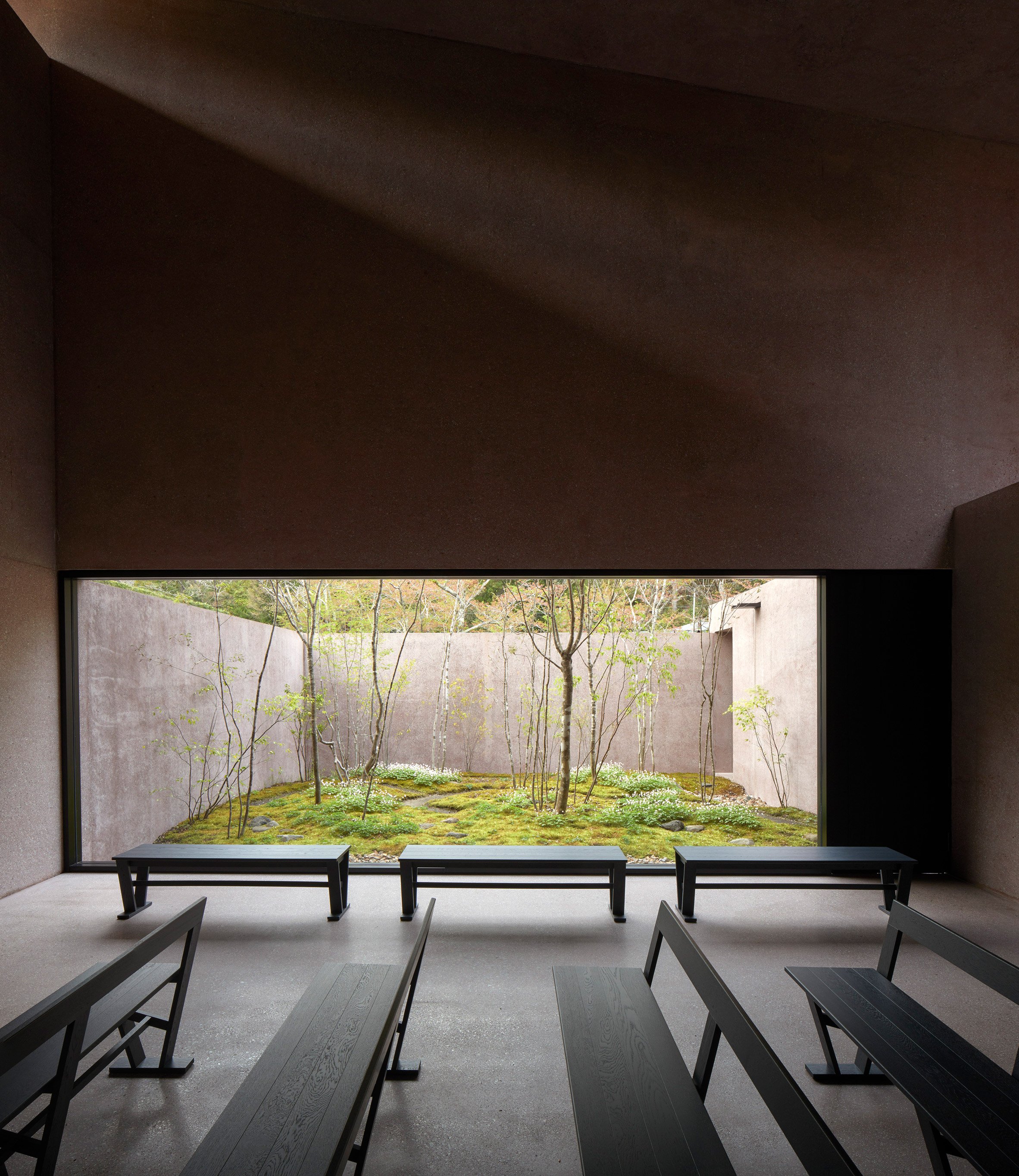 The visitor centre positioned on the opposite corner of the central courtyard consists of two large rooms that can be used for family gatherings and commemorations.

A lounge area provides a space for resting and eating, while a memorial room offering a place for formal feasts can be divided into three smaller rooms using pleated curtains made from washi paper and fabric.

The building is entirely constructed from pigmented concrete with an earth-like reddish hue that lends the structure a monolithic quality.

The concrete is honed for the internal flooring and is ground and sandblasted for the walkways and soffits to add textural interest to the surfaces. 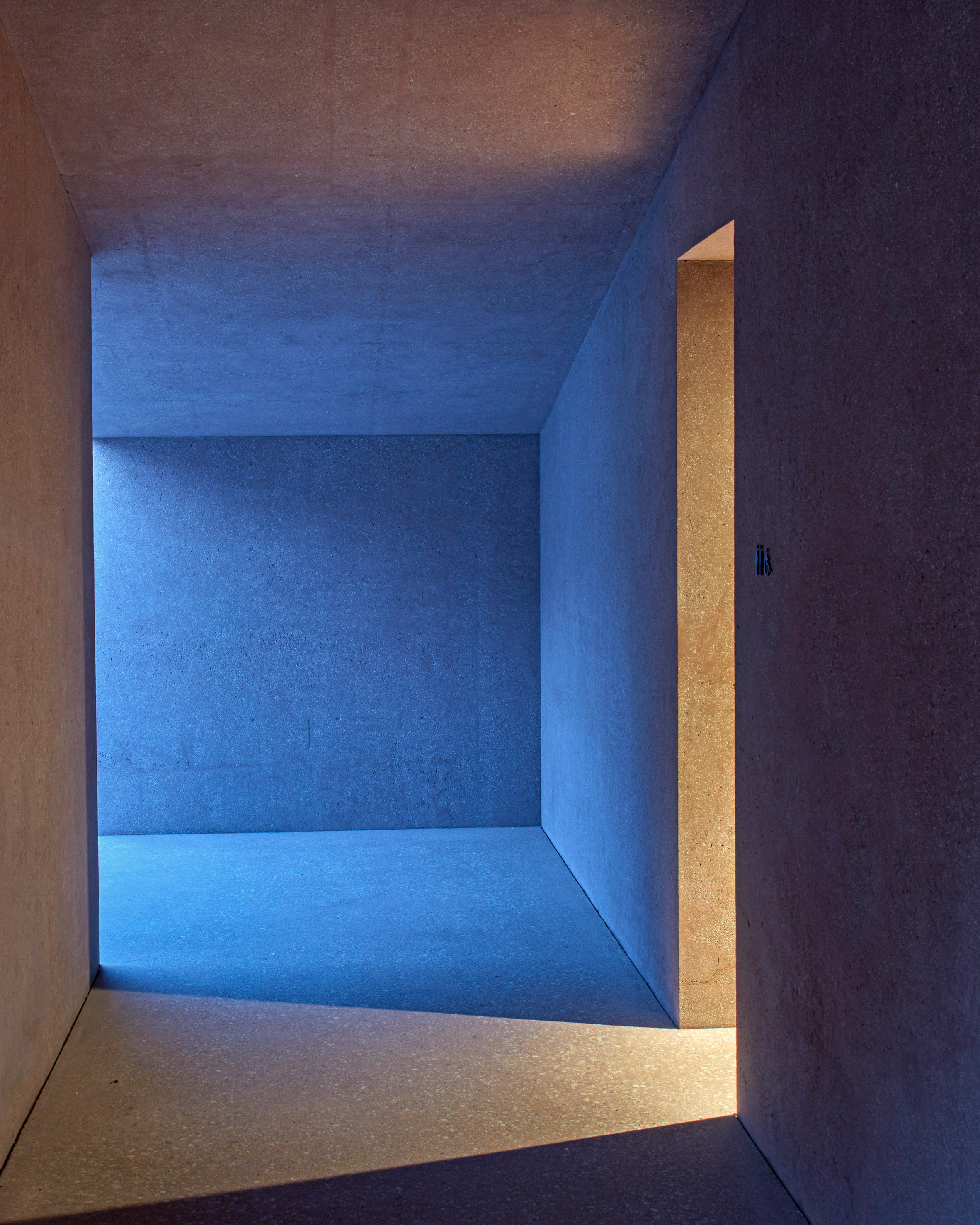 A channel that carries a gently flowing stream of water down the centre of the staircase from the top of the mountain culminates at a trough next to the chapel.

The water forms a pool next to the courtyard garden, and is then channelled beneath the site to a nearby canal.

Gardens incorporated into the building’s design feature a mixture of grasses, shrubs and wild flowers inspired by the palettes and textures of Japanese meadows. 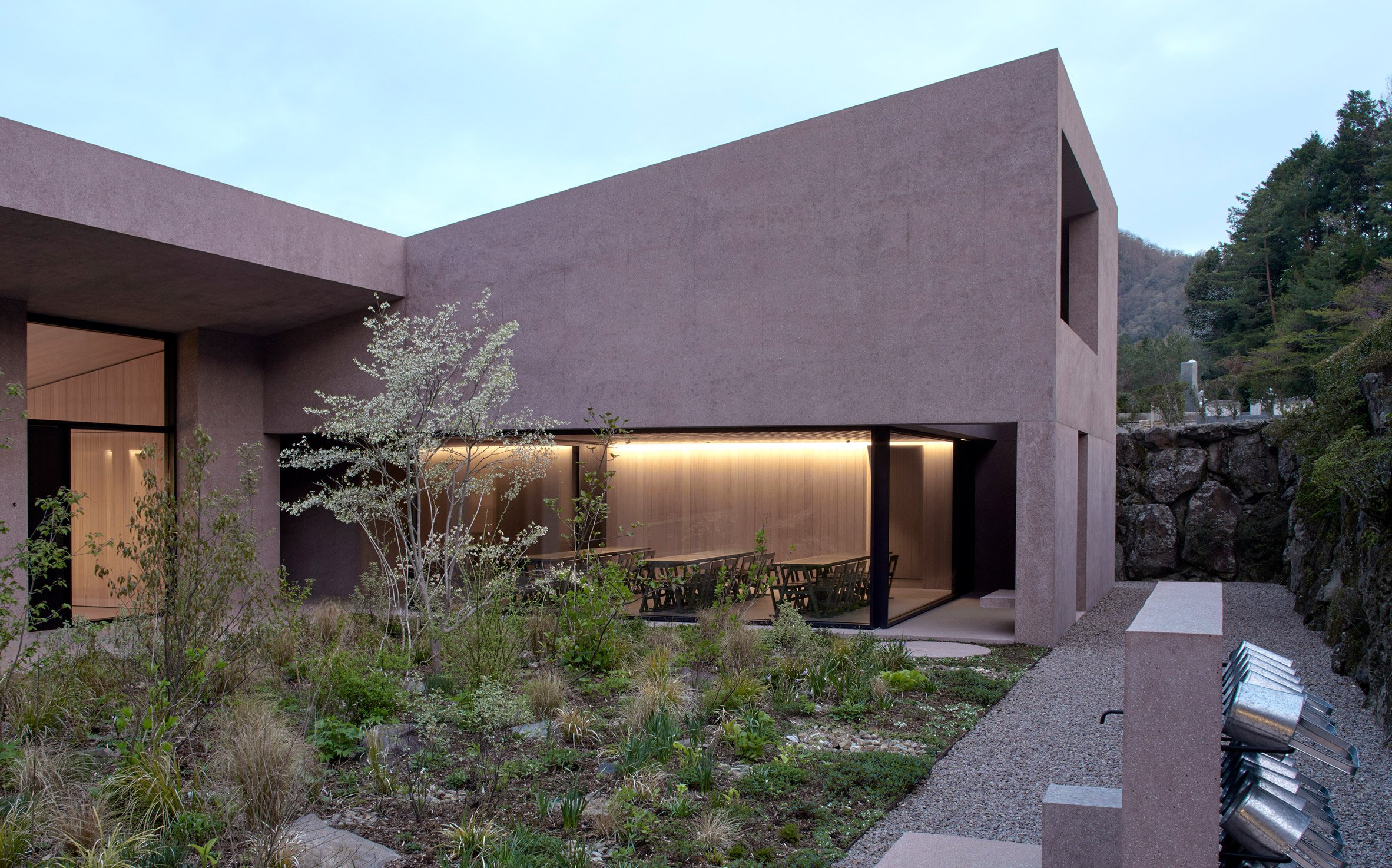 Sumner, who had been following the progress of the project for some time, was hoping to photograph the building on a day with moody weather. Faced with blue sky the photographer waited until late in the day to get the kind of light that would best show the subtly of the coloured concrete.

“The balance between the naturally lit shadowy areas and artificially lit areas was a theme that I was drawn to photographing this project,” Sumner told Dezeen. “I found myself revisiting certain areas at different times to capture how light changed throughout the day.”

“Light works like sound, constantly changing, affecting the mood of a place and how we view it,” he continued.

Other projects in Asia by David Chipperfield Architects include an office building featuring voids filled with trees and pools, while in London the studio has completed a major expansion of the Royal Academy of Arts.