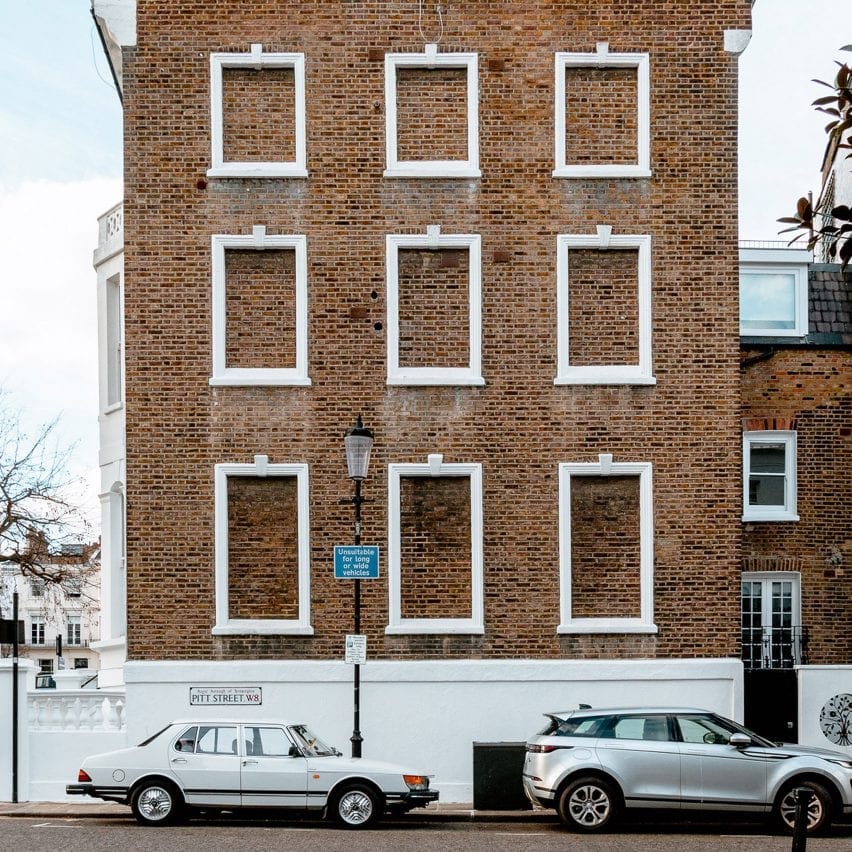 Photographer Andy Billman is exhibiting a photography series at the London Festival of Architecture that captures bricked-up windows of homes throughout the UK capital.

The series, which is named Daylight Robbery, aims to comment on the important role that air and natural light play in architecture and wellbeing.

Billman was invited to exhibit it at Bermondsey Project Space for the London Festival of Architecture in recognition of its relevance to this year’s theme of care.

While some of the bricked-up windows, often known as blind windows, captured in Daylight Robbery were created to offer visual symmetry, many were the result of the Window Tax – a property tax introduced in 1696 that charged owners based on the number of windows a building had.

To avoid paying the tax, many homeowners covered or bricked up their window spaces before and during its roll-out. Some were never uncovered or have since become listed.

“As a photographer of the built environment, I wanted to create compelling images to help bring an untold story from that past to life that we can take learnings from today,” London-based Billman told Dezeen.

“When London Festival of Architecture announced their theme of care, the project was a perfect fit with the festival, and it was clear to me that I could encourage discussion around wellbeing in the spaces we create today through my work.”

The Window Tax was widely criticised at the time and later repealed in recognition of its significant impact on health and the disproportionate effect on the poor.

Poorer families were often tenants of large tenement buildings owned by landlords who blocked their windows or included the extra cost in rent.

Billman said that there are “many parallels with causes we fight for today” to be drawn from this era, particularly in light of the coronavirus pandemic, which has forced countries into lockdown and left many people without the luxury of outdoor space.

As such, Daylight Robbery is hoped to invite discourse on social injustice while illustrating the importance of light and air in our built environment.

“Although the need for sunshine and open-air in our spaces is a prerequisite for most spaces, the circumstances we were thrown into a year ago brought these elements back into focus,” he explained.

“When we were limited to only one walk or exercise per day, it showed how much we had taken these things for granted.”

Billman documented over 80 buildings for Daylight Robbery, though just 16 highlights have been selected for the exhibition that runs from 22 June to 26 June 2021.

He now hopes to expand the documentation beyond London and across the UK and help draw attention to our everyday surroundings that “often go overlooked”.

“The juxtaposition between appreciating the visual beauty of these overlooked bricked up windows yet at the same time how they tell the adverse story of people being robbed of natural light fascinates me,” Billman concluded.

“Creating photography that makes you take a moment to look beyond the surface to explore these two opposing themes is what I hope viewers take away. I’d like viewers to take an extra moment to observe their surroundings. It can uncover fascinating stories.”

The London Festival Architecture is a month-long citywide celebration of architecture in the UK capital that takes place annually.

Elsewhere, nine emerging architects and designers have installed imaginative street furniture for the festival including a stone courting bench and a giant teacup.

London Festival of Architecture (LFA) takes place from 1 to 30 June 2021. See Dezeen Events Guide for all the latest information you need to know to attend the event, as well as a list of other architecture and design events taking place around the world.