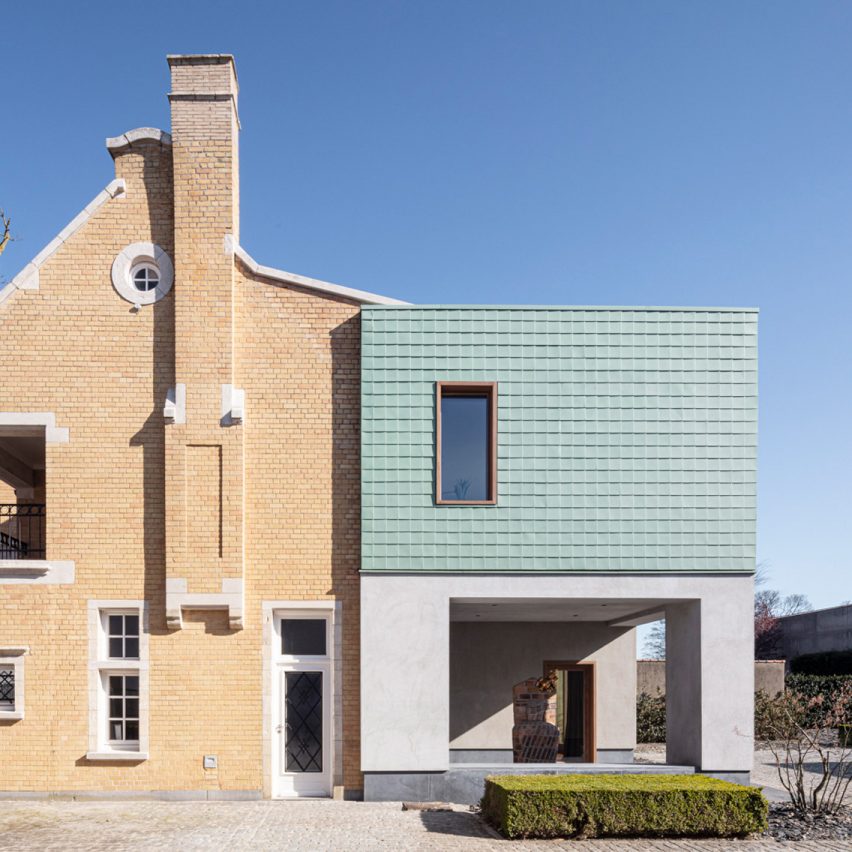 Architecture studio Declerck-Daels Architecten has renovated an early 20th-century home in the Belgium town of Ingelmunster into a multifunctional office clad in green-patinated copper cladding.

Belgian-based Declerck-Daels Architecten renovated the offices of Belgian construction group Monument Group, which specialises in historical restorations, to reflect the ethos of the company.

The renovation updated the offices to create a space that would function as a multifunctional headquarters and could be used by all employees.

Named Monumen(t)huis, a combination of the word monument and the Dutch for home – thuis, the office includes a meeting room, bar, relaxation rooms, terrace, kitchen and two guest rooms.

“It was our intention to create a really cosy place,” the studio explained. “Not to recreate a house, but a to create a home for everyone at Group Monument – Monumen(t)huis.”

“The building is now prettier, more functional and cosier. It is representative for their [Monument Group’s] approach on restoration and renovation,” it added.

The house had an original ornate facade at the front of the former home, while the rear is a newer addition but was added prior to the restoration.

The studio revamped the rear extension by cladding it in a custom green pre-patinated copper, which was paired with grey render on the ground levels.

“An extension built some decades ago was a total mismatch with the existing heritage building,” said studio co-founder Benard Declerck.

“That’s why we wrapped it, to create a better balance between old versus new, making it more beautiful and attractive,” he told Dezeen.

Various sized wood-framed windows were set amongst the copper lozenges and sobering render to create a warm and soft contrast.

The studio explained it was important to find the right balance between old and new and added functions and technologies that were sensitive to the heritage of the building.

Inside, the old and new are linked through the interiors’ neo-renaissance style, which can be seen through its parquet floors and ornate mouldings.

A feature wall and bar are clad with textural dark wood panelling, while terracotta floor tiling reflects the exterior copper cladding and creates zoning between spaces.

A red-painted staircase in the centre of the building crosses through each floor and has been topped with a steel interpretation of the original period balustrades to add height.

Declerck-Daels Architecten is an architectural studio based in Belgium, founded by Declerck and Griet Daels in 1999. The studio specialises in architecture, interior design and urban planning.

“[We enjoyed] working for and with an enterprise and constructor that cherishes heritage, craftsmanship, sustainability, aesthetics… and thus investing in accommodation for their own employees,” said Declerck.

In 2015 the studio completed a dental surgery in Bruges constructed using different varieties of timber cladding.