London-based architects Denizen Works has submitted planning for a observation tower containing a vertical gallery and bird hide at Inverewe Garden in Scotland.

The design has been created in response to an open brief set for Denizen Works by the garden’s owners – the National Trust for Scotland – to create a viewing tower to draw more visitors to the property.

Set on a tree-dotted slope deep within the botanical gardens, the tower houses a gallery and bird hide spread over 64 square metres of internal floor space. The intention is for the tower to function as a landmark and orientation point to entice visitors into the garden’s outer reaches.

“The form is an abstracted tree with a slight widening at the base,” Denizen Works director Murray Kerr told Dezeen. “It’s deformed over its height by exposure to the Loch winds which gives a directional view back to locally nesting herons and the rest of the garden.” 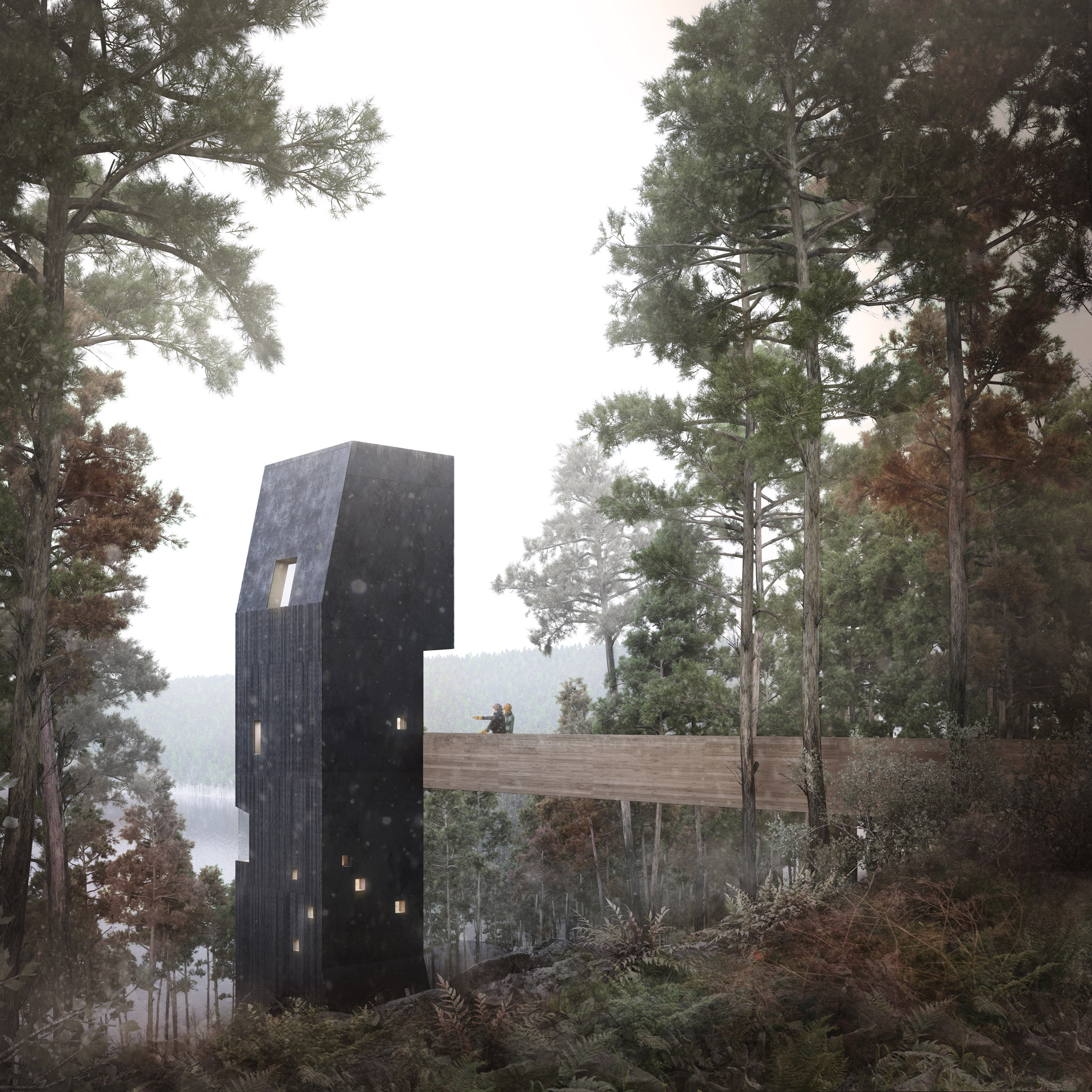 Called Eyrie – the name given to a large nest of an eagle or other bird of prey – the tower stands at 20-metres tall so that it will blend into the surrounding tree canopy.

With gallery spaces at its base and a hide at the top, the tower is accessed, from the garden’s High Viewpoint where visitors will follow a path down the natural contours of the slope before crossing a short bridge to the tower.

“Rather than creating a tower for its own sake, we were interested in creating an experience integrated into the natural route through the garden landscape,” said Denizen Works.

A staircase that wraps the base of the tower links to a further network of paths as well as the tower’s gallery spaces, which will tell the story of the garden through different spatial experiences at each level, and will also showcase specially commissioned art.

At the top of the tower, a bird hide provides panoramic views across the tree canopies and allows visitors to observe the local wildlife, including nearby nesting herons and local golden eagles.

The tower rests on a solid base formed from bush hammered concrete and is clad in a contrasting mix of stained vertical larch sourced on site, and smooth pine tar.

“The materiality of the tower is based on the idea of a sliced tree trunk, with its rough and smooth faces,” explained the architects.

“For the visitor, the experience will be one of intrigue: a structure where the internal functions are not necessarily understood from the outside, much like a burrow or woodpecker’s nest.”

Windows of varying shapes and sizes punctuate the tower on all sides, with a house-shaped window at its base.

“The galleries will tell the story of the house at Inverewe, links to local artists and the landscape and garden,” said Kerr. “The forms, openings and lifting will reflect these uses so there will be familiar forms in a rather unusual setting.”

Internally, the timber sheathing board is left exposed – a feature that the architects said will provide “a warm and light counterpoint to the totemic presence of the tower”.

“These materials will be reflected throughout a wider masterplan to refurbish the restaurant and retail areas, as well as a possible series of smaller sculptural interventions across the landscape,” revealed the firm, which has now submitted planning to Highland Council with the aim of breaking ground on site in Autumn 2018.

Completion is slated for spring 2019.

Created in 1862 by Osgood Mackenzie and owned by the National Trust for Scotland since 1952, Inverewe Garden is located just to the north of Poolewe in Wester Ross. It covers some 20 hectares and holds a world renowned collection of trees, plants and flowers.

Denizen Works recently completed an apartment building in the English seaside town of Whitstable that references traditional fishing huts, and in 2016 renovated a modernist house in London.