Studio RHE has created a 10-storey engineered timber atrium at the heart of a London office building, as shown in this exclusive footage shot by Dezeen for the architecture firm.

London-based Studio RHE renovated the Import Building for Trilogy Real Estate, as the first phase of the reinvention of the Republic complex in East India Quay. 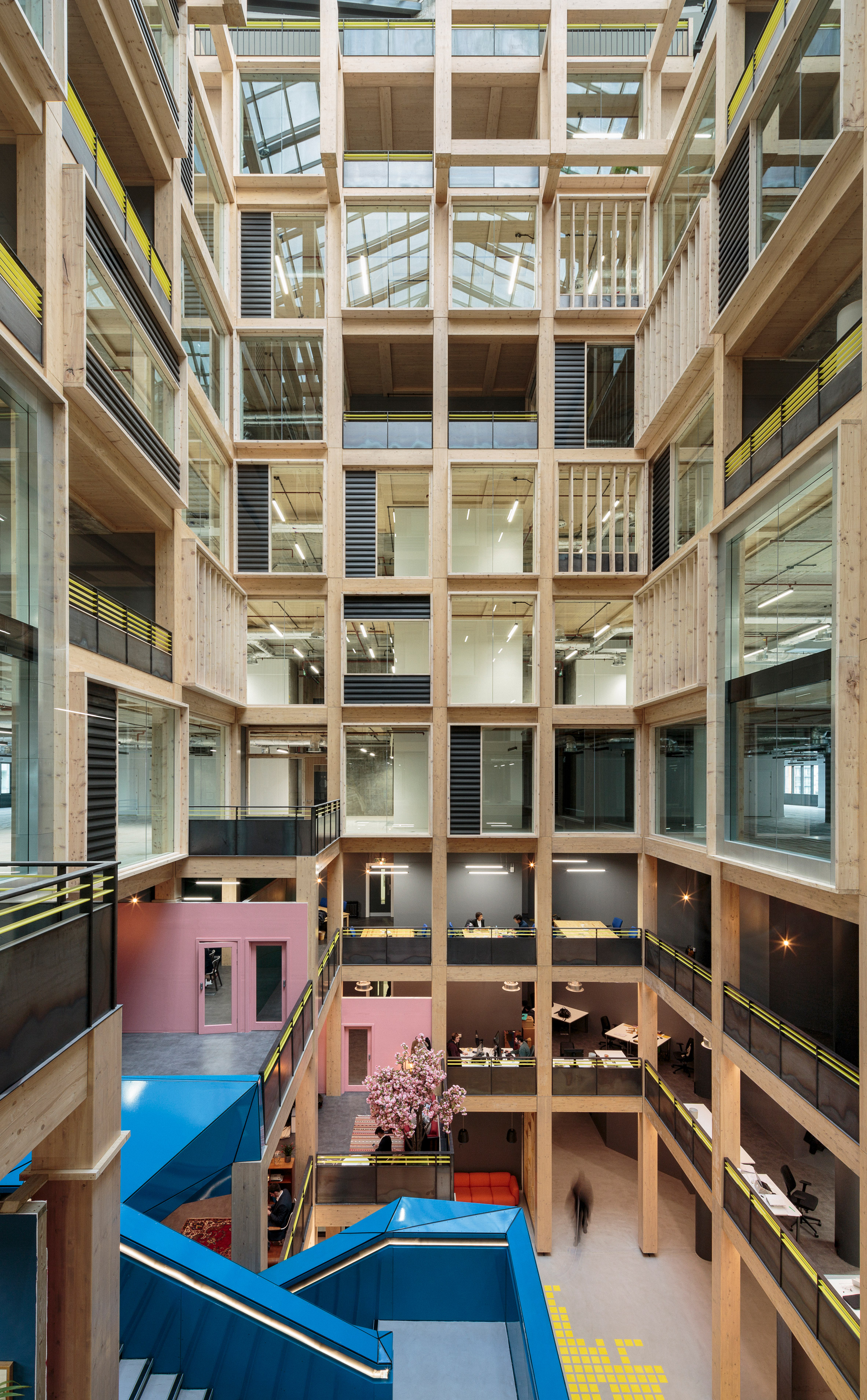 The building was fully updated, with amenities including bars, cafes and extensive outdoor terraces. However the most striking intervention is the new atrium.

These materials are increasingly being used in architecture, as they offer sustainability, quality and speed in construction. The “world’s largest CLT building” completed in London’s Dalston in 2017, and a succession of tall timber towers are being planned around the globe. 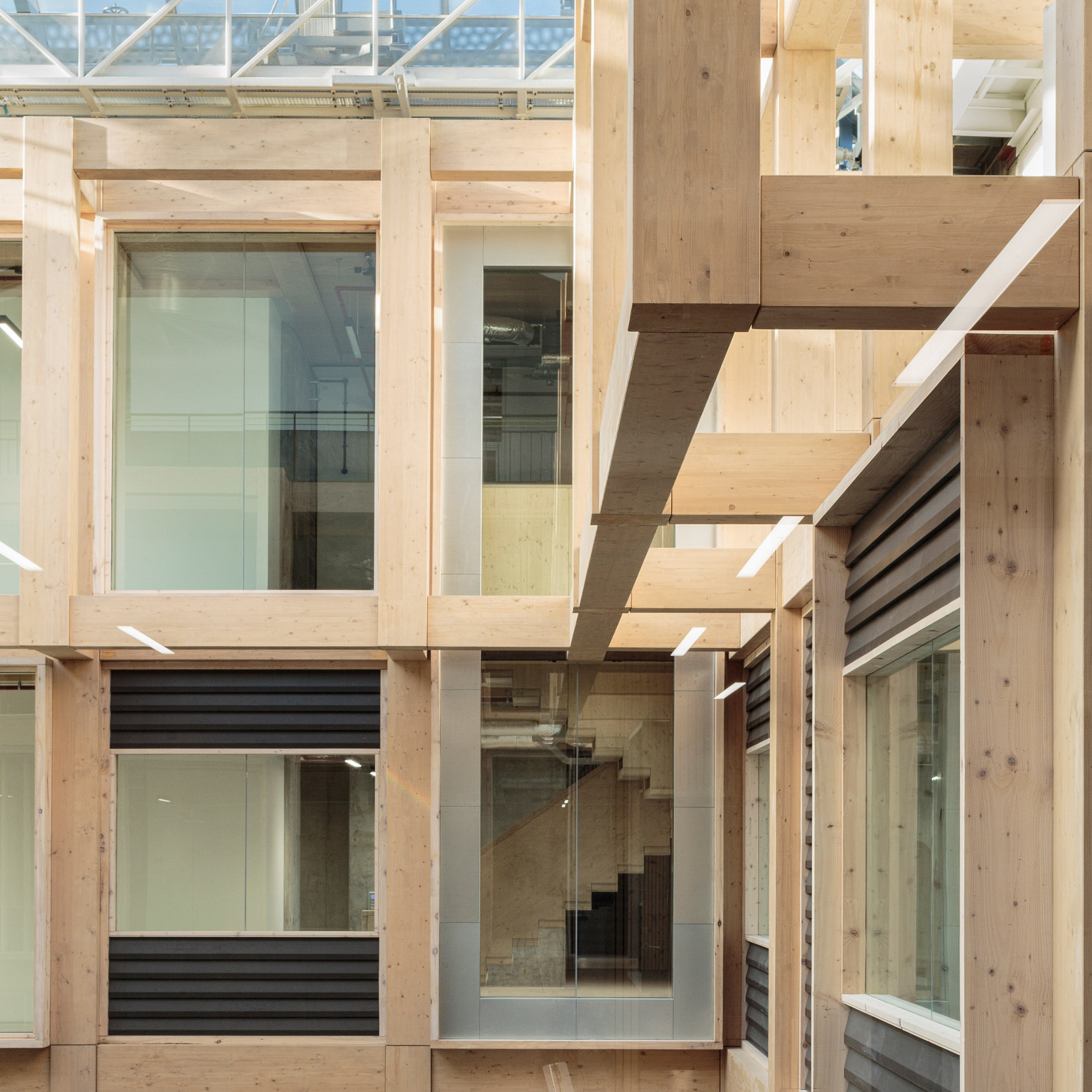 As shown in the movie, the atrium features multiple balconies, with timber frames that cantilever into the central space. Light floods in from above, thanks to a large skylight overhead.

Looking into the atrium are 22,200 square metres of flexible office space that is aimed at “creative companies priced out of central London and Shoreditch”. 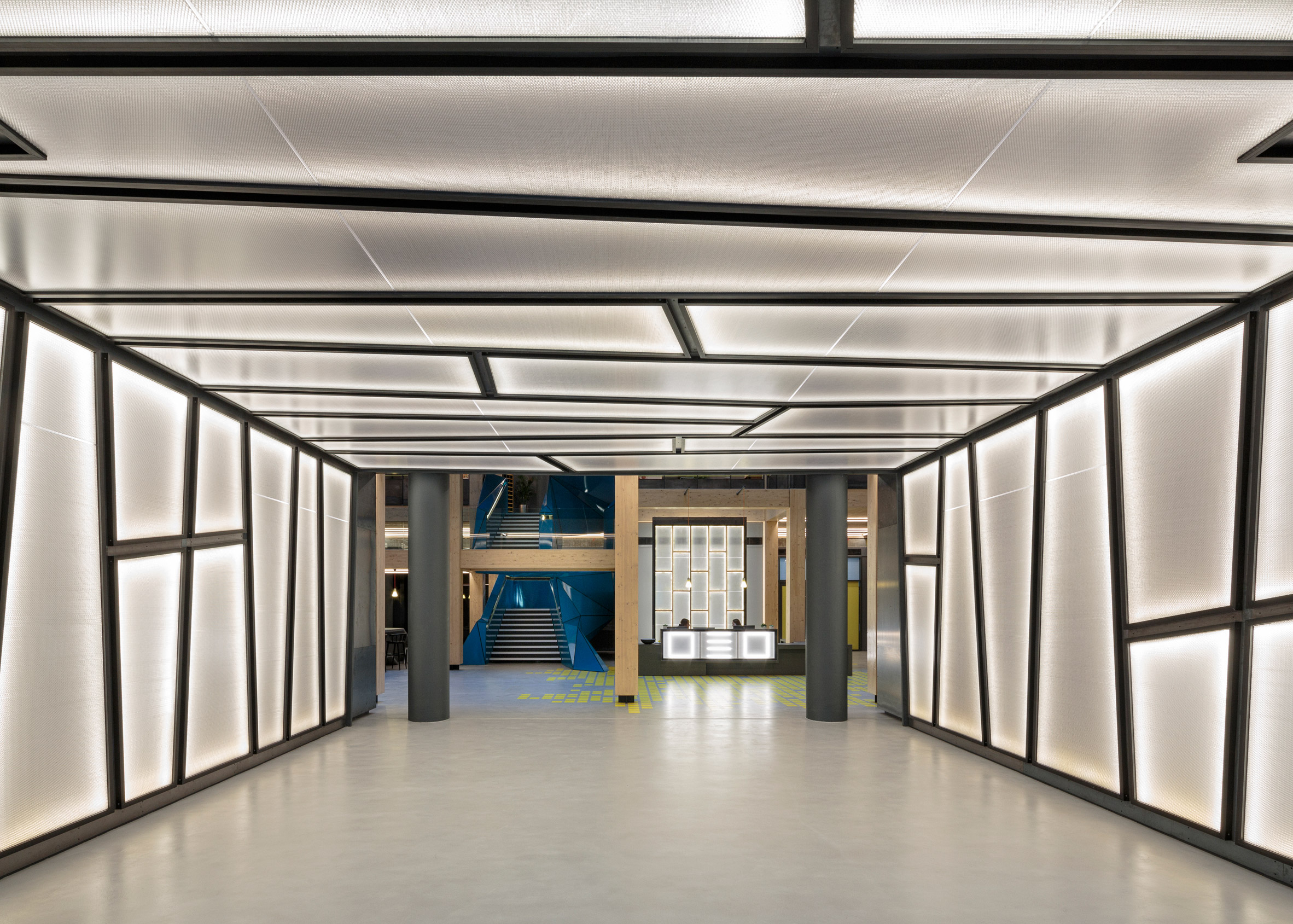 The atrium is reached via an entrance light tunnel made from polycarbonate, with a custom-built concrete reception desk to welcome visitors.

Collaborative working is encouraged with shared meeting spaces inside the atrium at ground-floor level, connected directly to the communal water gardens outside. 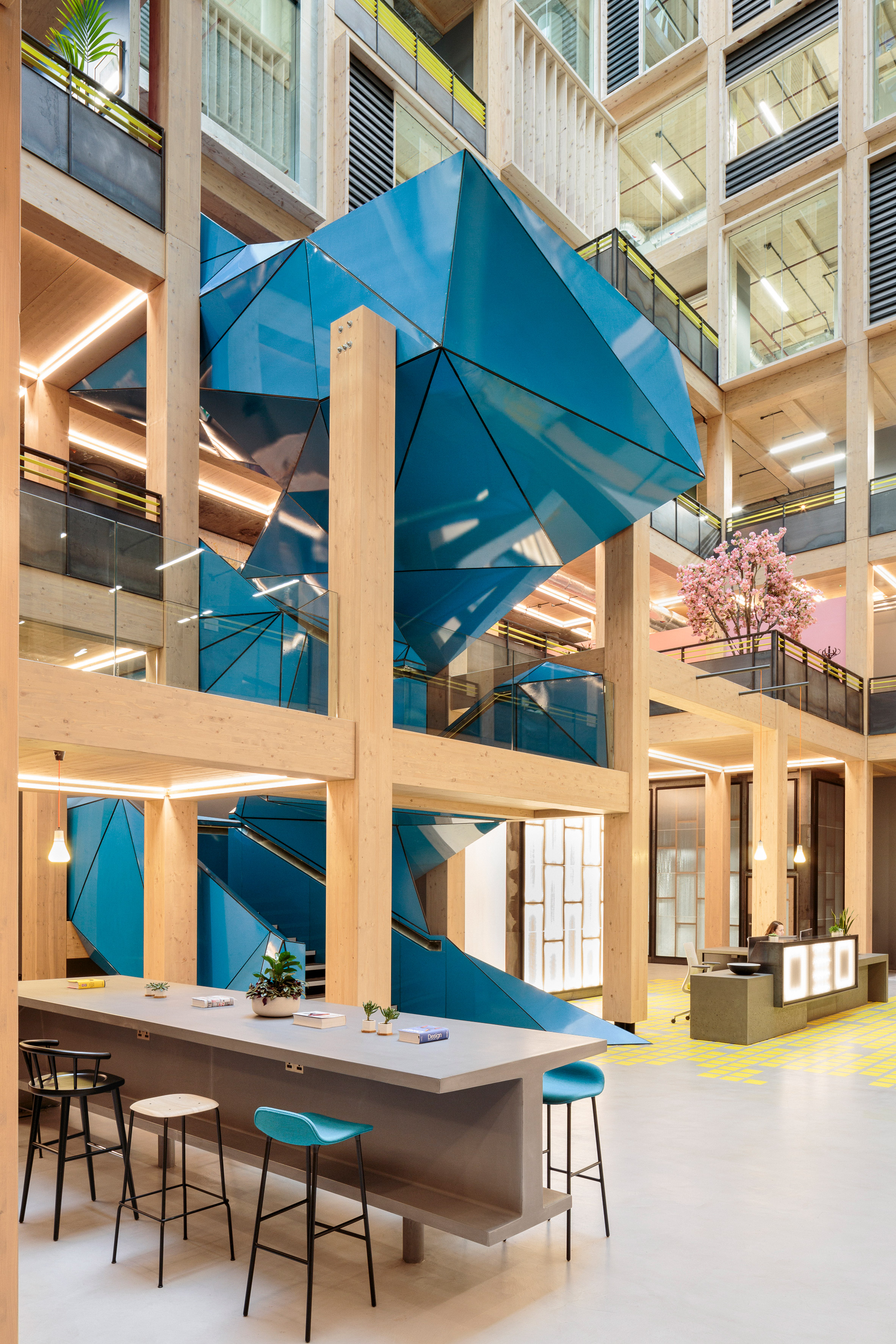 Externally, the landscaping of the original 1990s development is being replaced, with timber porticos and colonnades built alongside water features.

According to the developer, Republic aims to appeal to the next generation of creative and tech businesses to “stem the tide of young companies leaving London.”

Architects embrace “the beginning of the timber age”

“We are transforming the Import Building into a dynamic collaborative 21st century workplace, with flexible spaces and innovative amenities and facilities,” said Richard Hywel Evans, director of Studio RHE.

“It will form a cornerstone to this sustainable unique new working neighbourhood, and we look forward to the next stages of the development.” 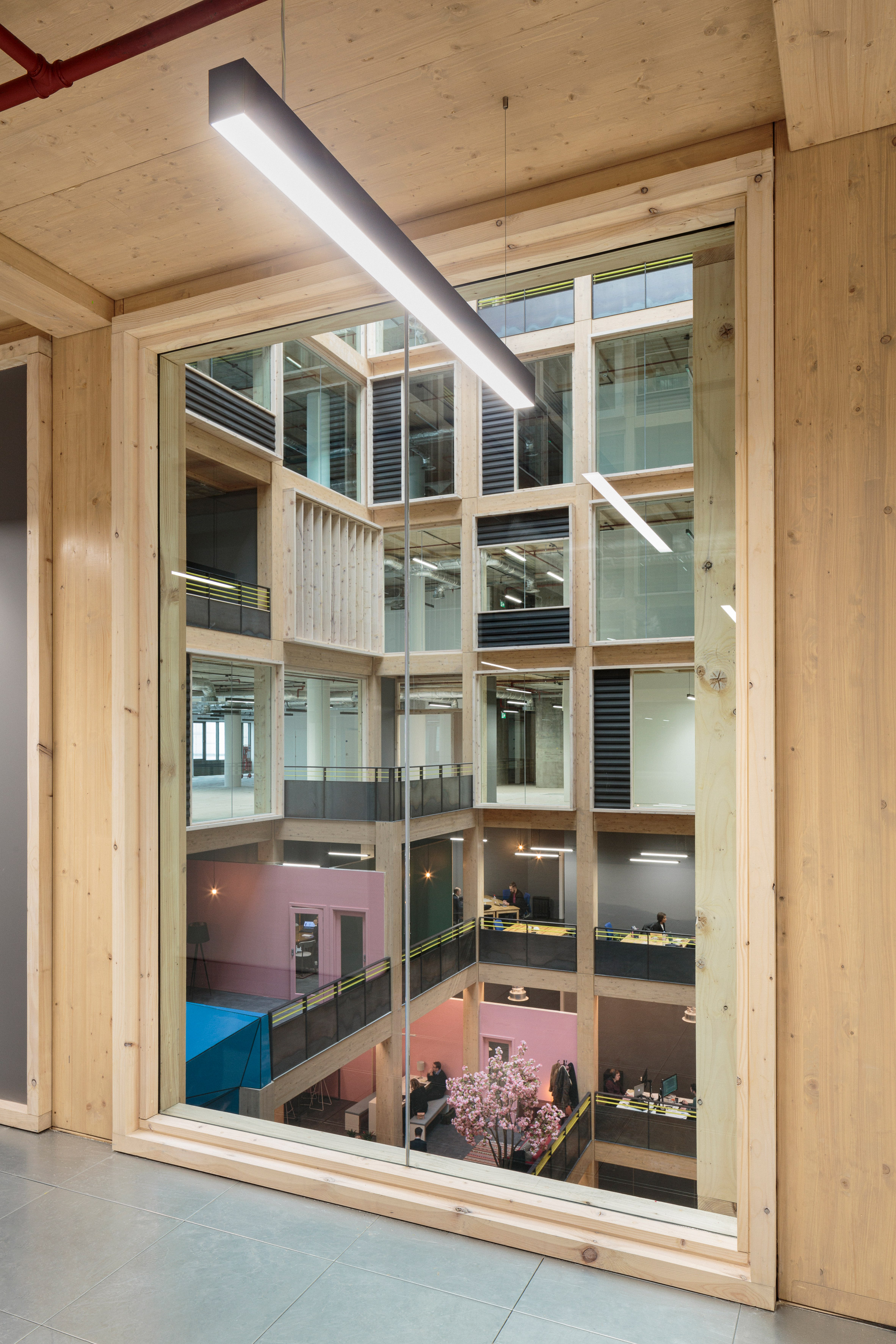 Following the renovation of the Import Building, Studio RHE will remodel the Export Building, which stands opposite, as the second phase of the development of the Republic.

Robert Wolstenholme, director of Trilogy Real Estate said: “Republic is already attracting young businesses priced out of central London and Shoreditch, and we are setting the tone for our new creative neighbourhood with high-quality lettings that help us to create a place for our tenants to work, collaborate, innovate and play.”