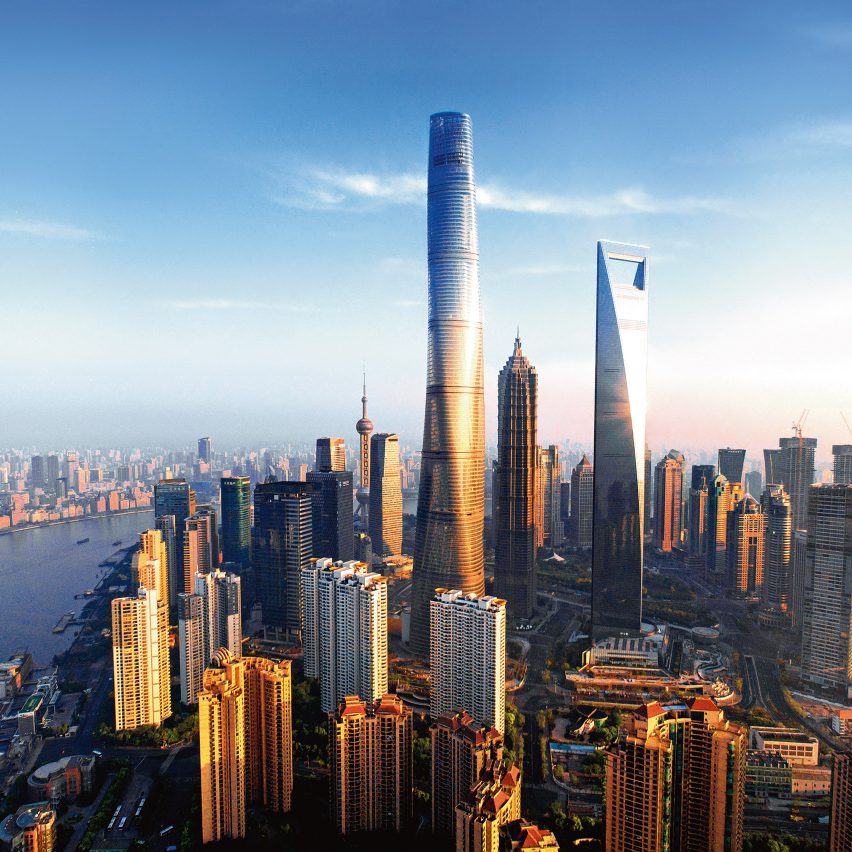 Following the death of architect Art Gensler at the age of 85, we look at eight key projects by his firm Gensler, from shops for brands such as Gap and Apple to a supertall skyscraper in Shanghai.

American architect Art Gensler founded his eponymous architecture studio in 1965 in San Francisco, together with Drue Gensler and James Follett.

He oversaw its expansion to become the largest architecture studio in the world, with 50 global offices and reported revenue of $1.5 billion.

Gensler designed everything from corporate interiors for America’s largest companies to the first shops for cult contemporary brands such as Apple and Gap.

His studio has also designed megaprojects including the world’s second-tallest building in Shanghai and an entire city-within-a-city on the Las Vegas strip.

The architect died in his sleep on 10 May 2021 after an 18-month illness from lung disease.

To mark Gensler’s passing, here are eight projects from throughout the history of the global firm that he built: Gensler designed the second-ever Gap clothing store after bumping into Don Fisher, the American businessman and founder of the brand, on a California beach. “Hey buddy, aren’t you an architect?” Fisher reportedly asked Gensler.

Half of the 600-square-metre space in the San Jose shop was laid out like a stock room with stacks of Levi’s jeans arranged for “guys”, “gals” and “kids”. 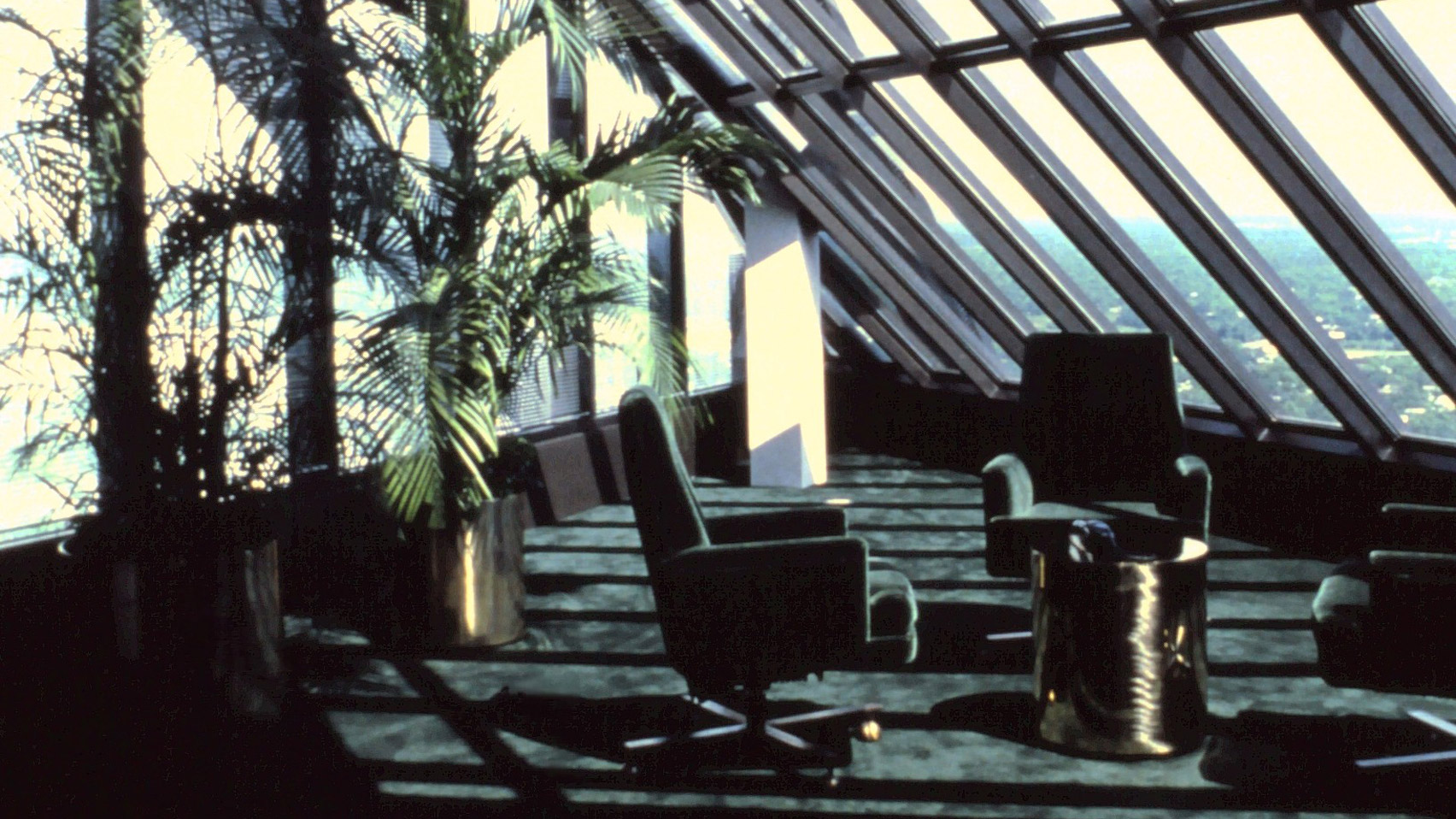 One of Gensler’s early projects was designing the interiors for Pennzoil Place, a pair of glass, trapezoidal towers in Downton Houston built for the Californian oil company Pennzoil.

Gensler opened its Texas office in the city for the project, marking its first expansion outside of California. The interiors were designed to complement the towers’ modernist style. Gensler expanded the convention centre twice, first in 1992 and later in 2003, when the firm increased capacity by 45 per cent with the Moscone West Exhibition Hall in a collaboration with Michael Willis Architects and Kwan Henmi Architecture.

The design includes a 34-metre-high curtain wall that the practice claims is “one of California’s tallest unsupported glass structures”. 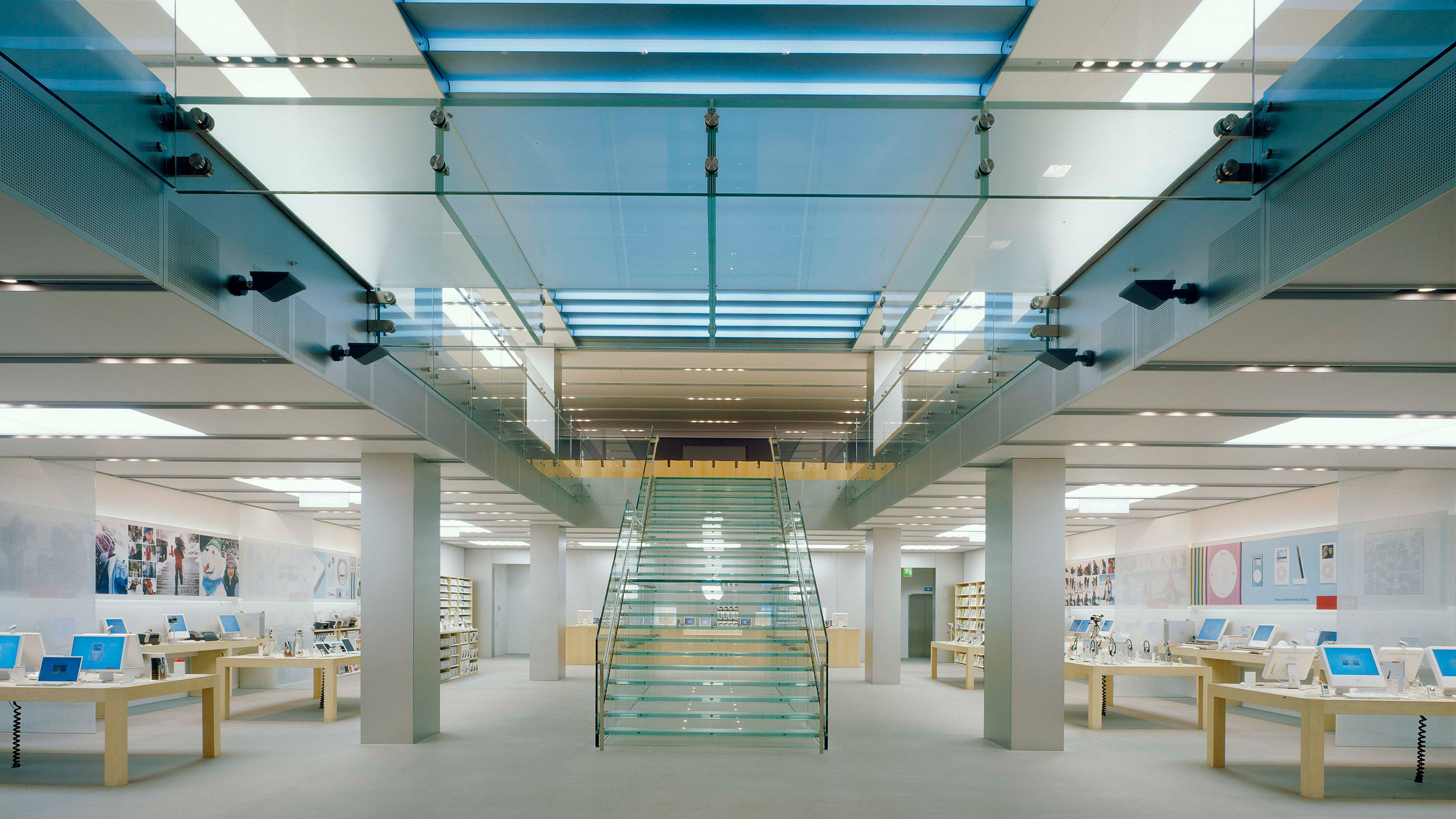 Gensler designed the first 100 Apple stores – before being personally fired by Steve Jobs. He reportedly spent one day per week locked up in a guarded warehouse for six months working on the top-secret designs.

But when one of Gensler’s employees was poached to work on a project for rival company Microsoft, Jobs fired Gensler on the spot. 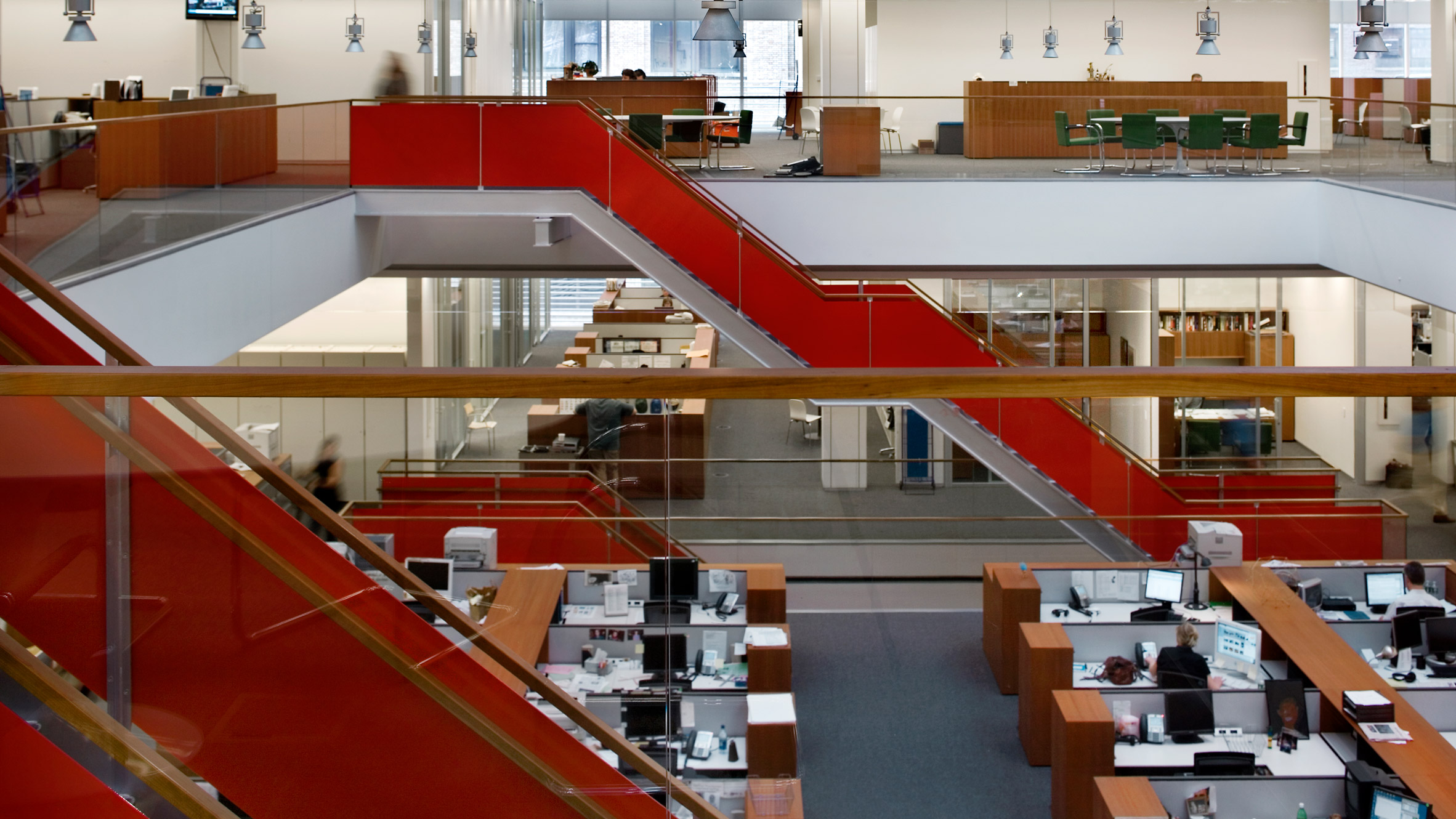 Gensler designed the interiors for the New York Times when the newspaper relocated from a historic neo-gothic building on 43rd Street to a glass tower designed by Italian architect Renzo Piano. Its open-plan offices were intended to reflect the reporters’ commitment to transparency.

“Many of my colleagues complained about the building at first,” the New York Times’s own architecture critic reported.

“There’s too much empty space in the newsroom, some groused. [But] even my grumpiest colleagues now concede that a little sunlight and fresh air are not a bad thing.” Gensler was the executive architect on the largest private development in the US, a 76-acre mixed-use complex on the Las Vegas strip. Gensler started working on the San Francisco International Airport in the 1980s, rebuilding and expanding the existing Terminal Two building to turn it into an international travel hub.

The firm revamped the terminal again in 2011, with metal wall and ceiling panels made to look like wood and five permanent sculptural installations from artists.

“Few architects get to build a terminal, tear it down, and build it up all over again,” Gensler said of the project. 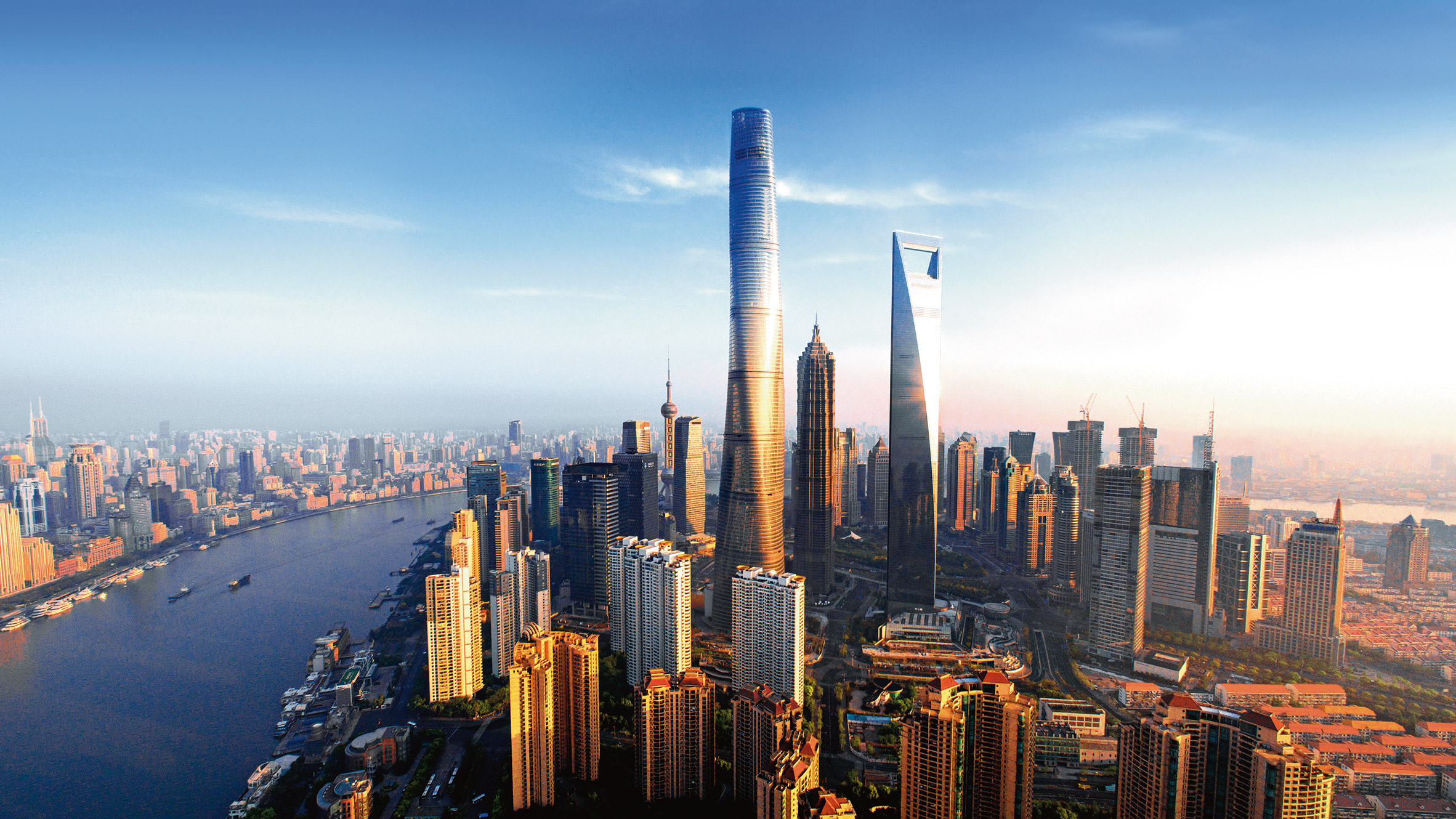 Gensler designed the second tallest building in the world, a 632-metre-high supertall skyscraper with a public observation deck, for the Shanghai Municipal Government.

Soaring over Shanghai’s Lujiazui financial district, the 121-storey building has a twisting form that allows it to withstand typhoon-strength winds.

The post Eight interiors and architecture projects by the late Art Gensler appeared first on Dezeen.