Guadalajara-based architecture firm Estudio Macías Peredo has created an intimate sanctuary on the remote island of Holbox, Mexico, based on the region’s ancient buildings. 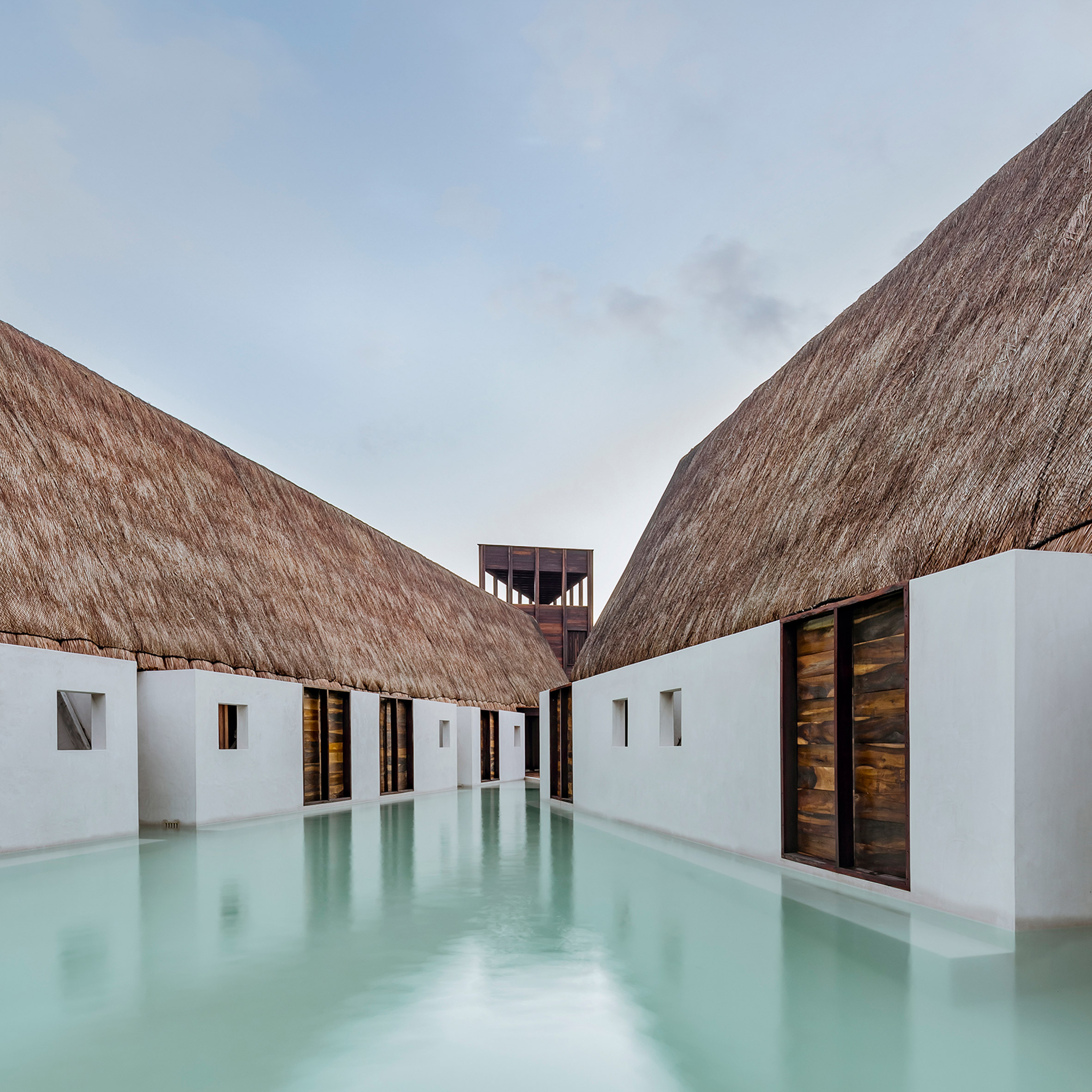 Devoid of cars and accessible solely by ferry, Isla Holbox is a fishing village off the Yucatán Peninsula and an emerging beach destination within the Yum Balam nature reserve. Its main draw for visitors continues to be the rare opportunity to swim with whale sharks during the summer months. 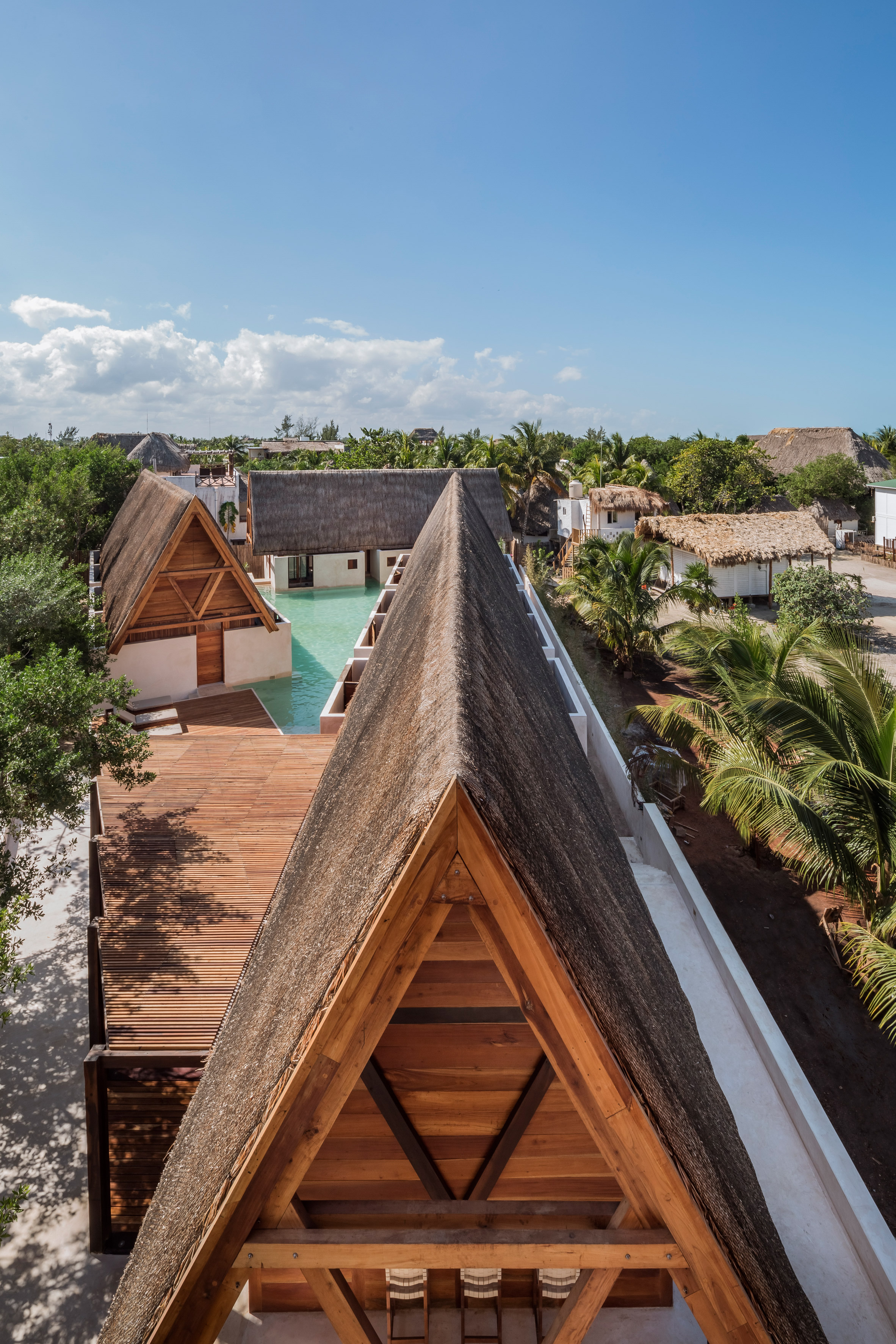 The Punta Caliza hotel is located 300 feet (91 metres) from the Gulf of Mexico’s emerald waters, on a triangular plot carefully selected by its owners, the Muñoz family.

The family of four from Tabasco first visited Holbox in 2012 while scouting for their first hotel project, and was immediately drawn to the minimal development and pristine environment of the island. They soon worked with the local community to procure land, which historically had been appraised by the number of palm trees rooted on the plot. 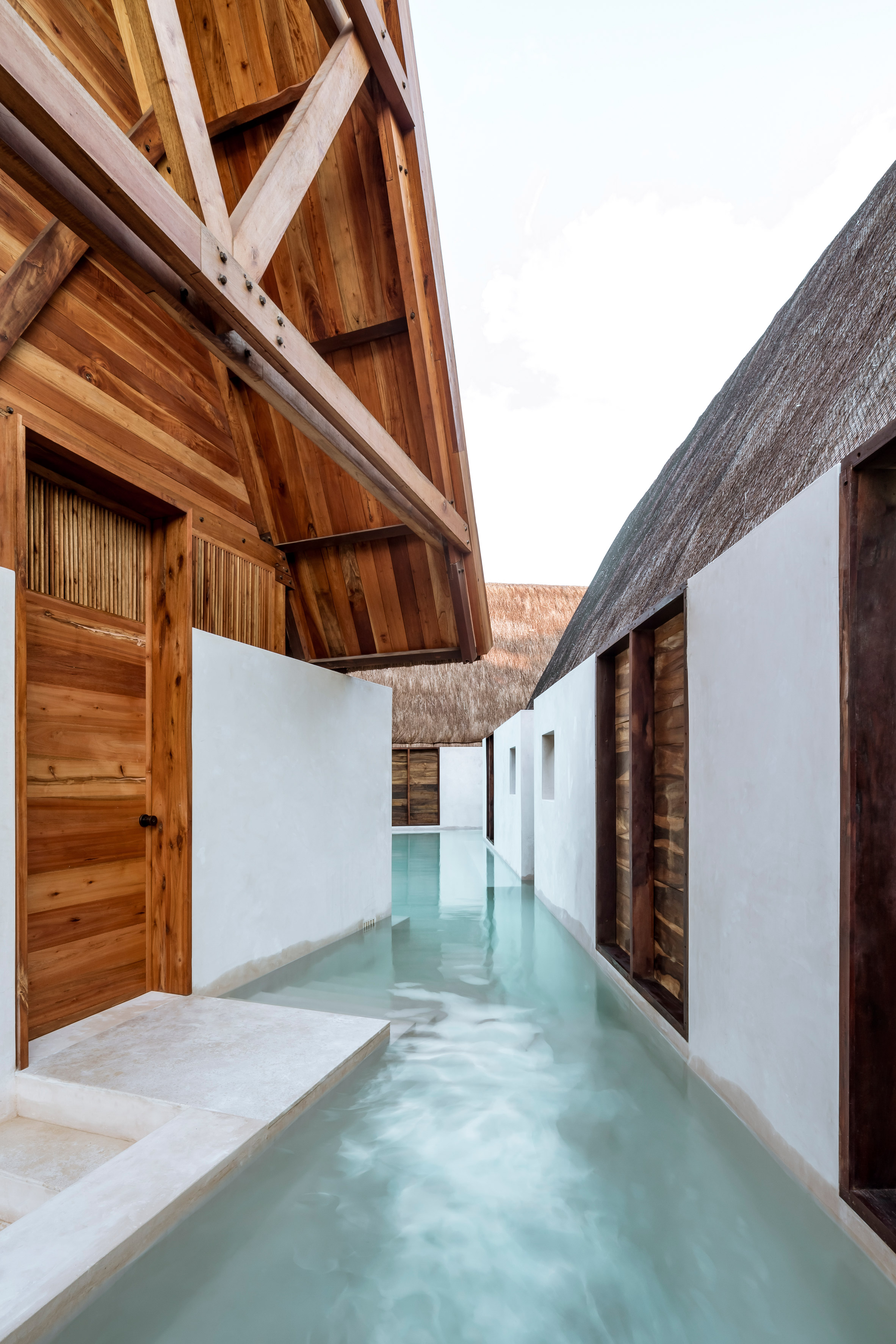 Claudia Muñoz, an architecture student at ITESO – Universidad Jesuita de Guadalajara, introduced her parents to her instructors at the time: Magui Peredo and Salvador Macías Corona of Estudio Macías Peredo. The studio and the family formed a partnership to manifest their vision for Punta Caliza.

The 12-room boutique hotel was inspired by Mayan architecture of the Yucatán Peninsula, in both construction and design. 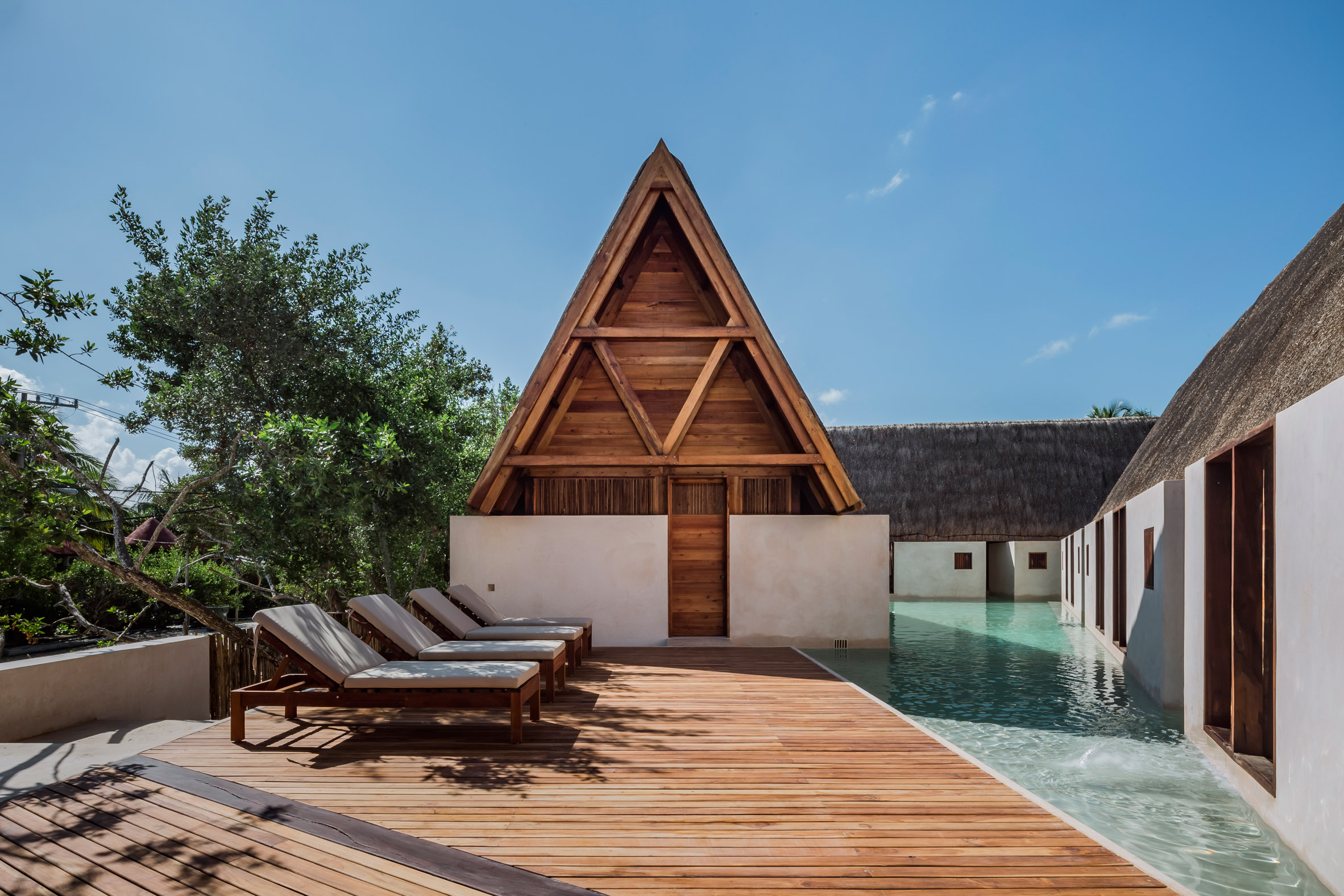 For its piedra caliza (limestone) floors and walls, the team employed chukum – an ancient Mayan stucco used to seal water cisterns. “It feels fresh and sandy, and provides the hotel with a soothing white colour,” Claudia Muñoz told Dezeen.

Punta Caliza’s design concept is a modern, more geometric interpretation of Mayan structures. The triangular pool is the property’s central focus, similar to the courtyards that anchor a traditional Mayan home. 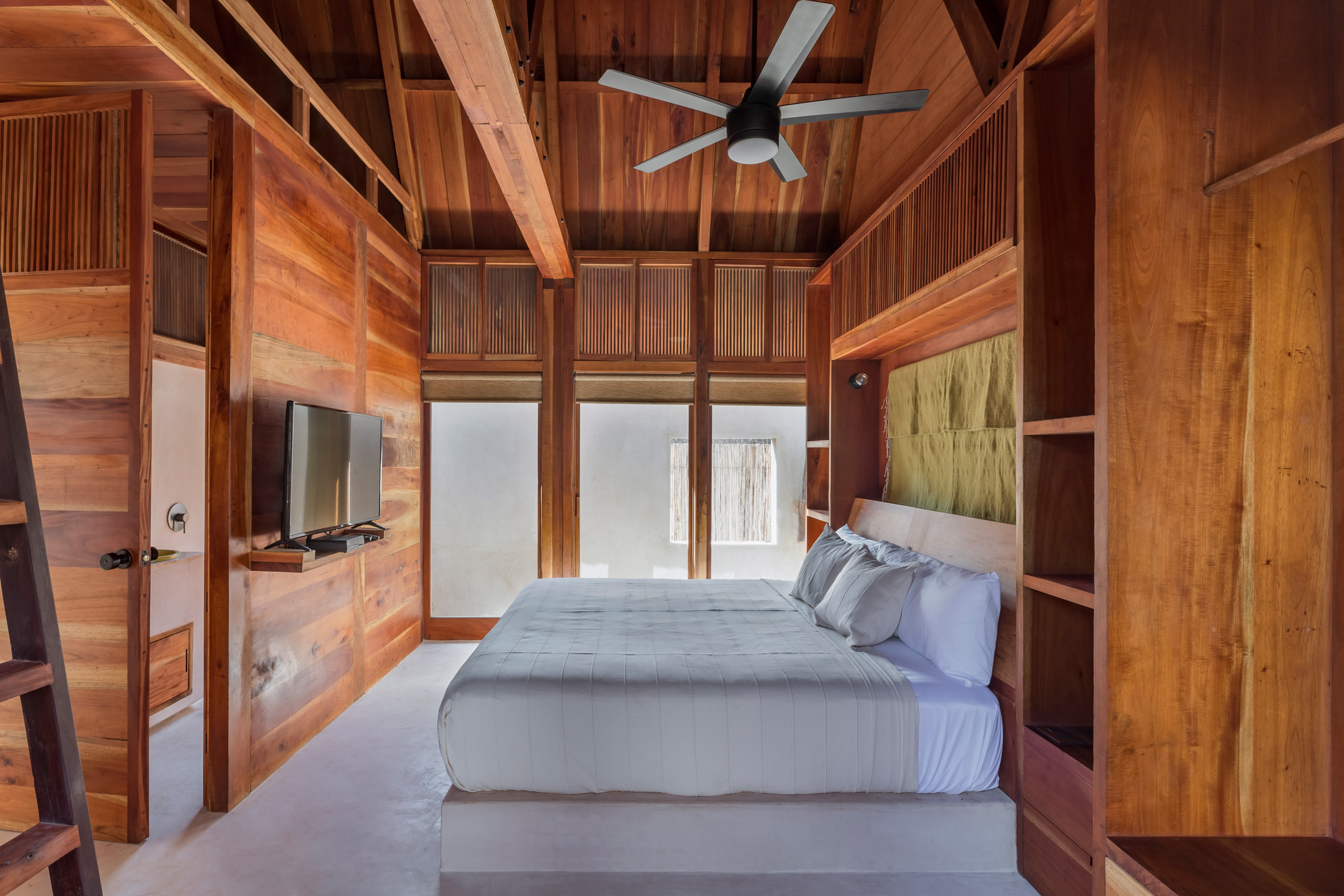 Each room has a private plunge pool that connects to the main canal, reflecting the omnipresence of water on Holbox. All the roofs are tidily thatched, a common characteristic throughout the island that helps sustain its authentic Mayan heritage.

The chukum-covered structures create a vertical dialogue with the rich woodwork above, all built using red cedar from the family’s tree farm.

Claudia’s father planted these cedar saplings when her brother Cuauhtémoc was born. Twenty-six years later, the wood was used to construct the buildings, and Cuauhtémoc co-manages the hotel with his sister. 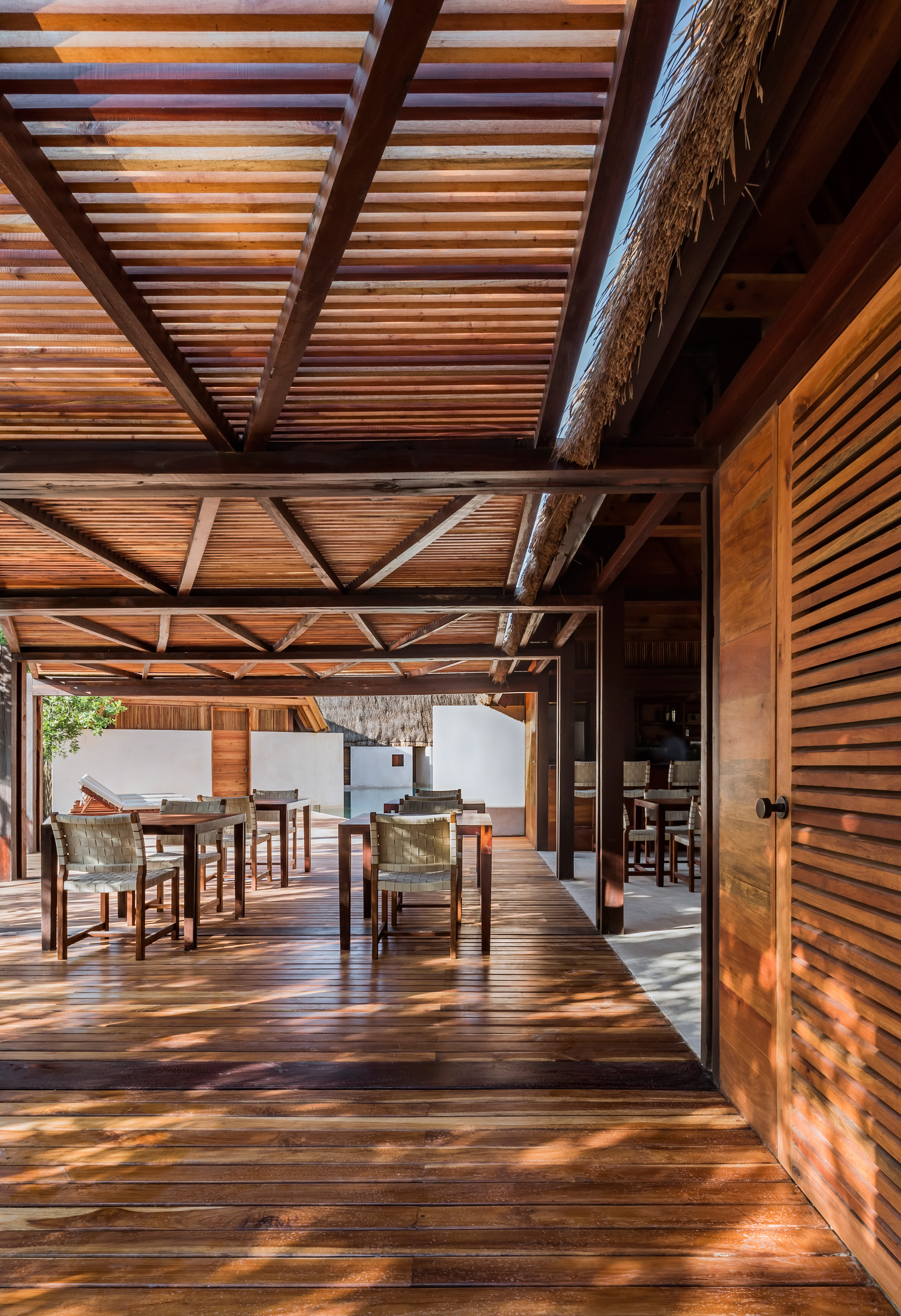 “We had the dream, we had the place, and we had acres and acres of red cedar – and that’s how all that wood and stone and hard work became our small hotel,” Claudia said.

In 2018, Punta Caliza won the Mies Crown Hall Americas Prize from the IIT College of Architecture in Chicago, in addition to representing Mexico at the Venice Architecture Biennale. 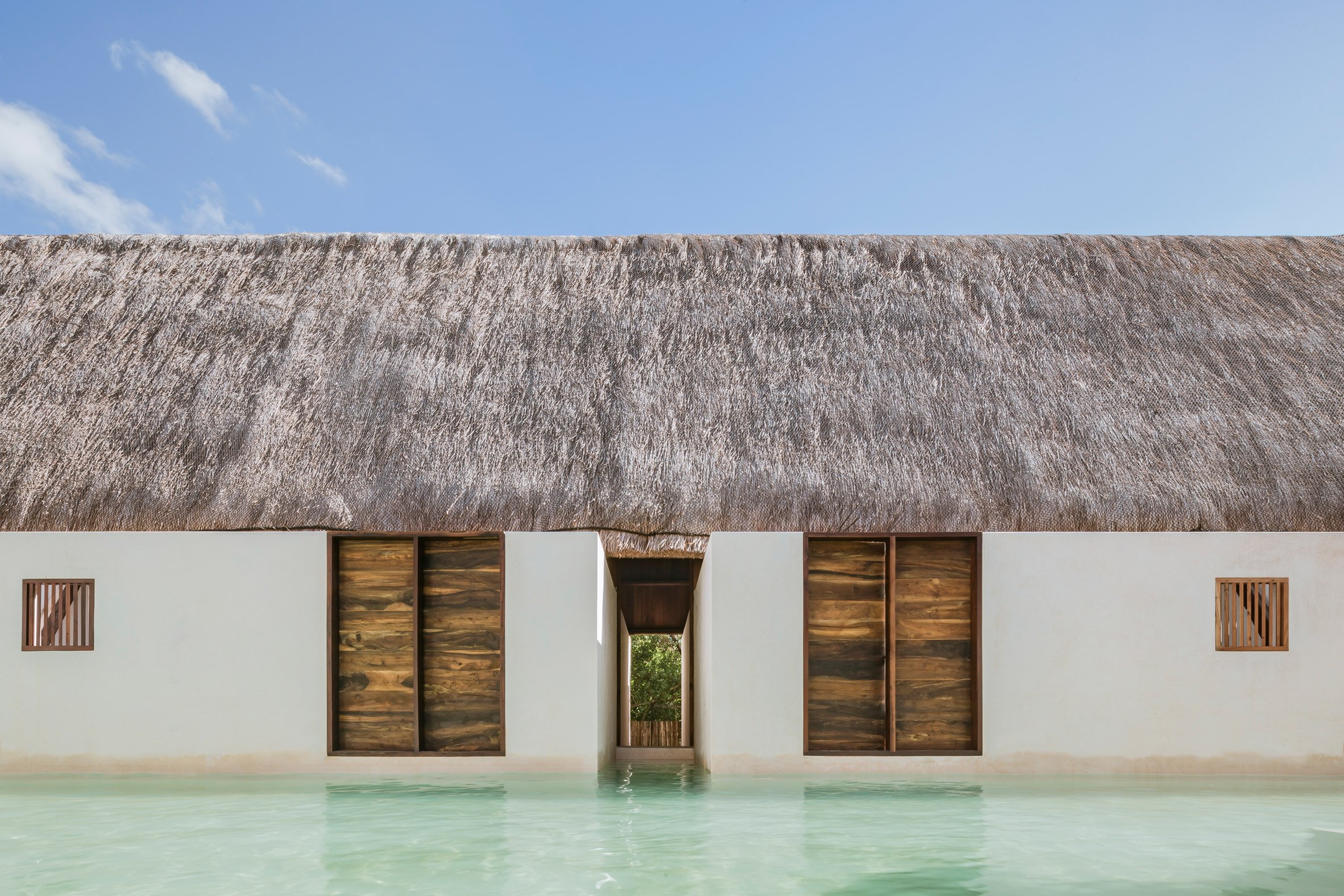 The Yucatán Peninsula’s north and east coasts are booming with new accommodation offerings, built to cater for the growing number of tourists visiting each year.

Other recently completed hotels and rentals in the area include a white-concrete guest house surrounded by dense tropical foliage and a holiday villa that open onto expansive terraces – both in the popular resort of Tulum.

Photography is by César Béjar.