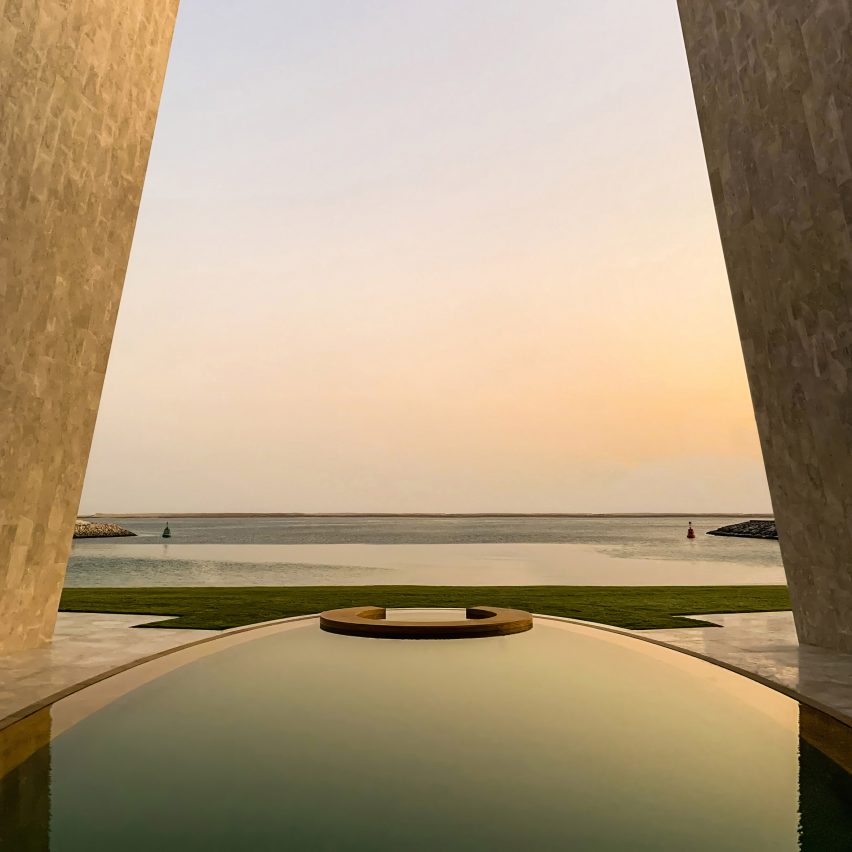 Italian architect Fabio Novembre has designed a house on a man-made island in Abu Dhabi that is wrapped around a sea-facing reflecting pool and has an entrance shielded by an artificial waterfall.

Built for a client who wanted high levels of privacy, the house occupies the entirety of a small artificial island in the Al Gurm Resort to the south of Abu Dhabi, the capital of the United Arab Emirates.

Designed to shield is occupants, the home has blank, curved stone-clad walls facing the landward side and expansive windows facing the waterfront.

“The architecture is like a shell on the beach, closed and protected from the side of the land, open and cosy on the seaside,” Novembre told Dezeen.

“We often use the metaphor of hiding on a desert island as a need of poetic isolation,” he continued. “Here it’s reality.”

The rooms are arranged within three concentric curved forms, surrounded by stone walls that wrap around an oval reflecting pool on the seaward side of the villa. The ends of these curved structures are enclosed with golden-framed glass.

“Privacy is a key word for the local culture, therefore I immediately thought about something mute on the outside with layers of walls of different heights, and open as a hug towards the sea,” Novembre told Dezeen.

“A simple gesture, the architectural answer to my client’s request.”

The ground floor of the 1,700-square-metre villa contains several living rooms and large dining rooms that open onto terraces as well as several offices and studies. Above, the first floor contains the master bedroom suite and guest bedrooms.

Design studio A++ created the interiors of the villa to “respect and at the same time enhance its distinctly contemporary attitude”. A series of lines along the ceiling and floors aim to encourage visitors towards the large windows.

Another feature of the home, which is accessed across a bridge, is an artificial waterfall that acts as a garage door, which the architect likens to a “magic door”.

“First of all it’s a recirculated water system, of course, there’s no waste of a primary need such as water,” said Novembre. “It is again used symbolically: a magic door from ‘One thousand and one nights’, or an oasis seen from afar.”

“The smart nozzle system allows you to write words and draw patterns that interact with the visitors. Real security is delegated to humans.”

This house is not the only building to incorporate a waterfall. Dezeen rounded up eight buildings that include waterfalls including Safdie Architects’ Jewel Changi Airport and a Chinese skyscraper incorporates with a 108-metre-high waterfall.

Italian architect and designer Novembre’s recent projects a collaboration with sportswear brand Adidas on a varsity jacket, a modular sofa system for Lensvelt and a range of beds influenced by fairytales for mattress brand PerDormire.

The post Fabio Novembre creates crescent-shaped villa on artificial island off the coast of Abu Dhabi appeared first on Dezeen.