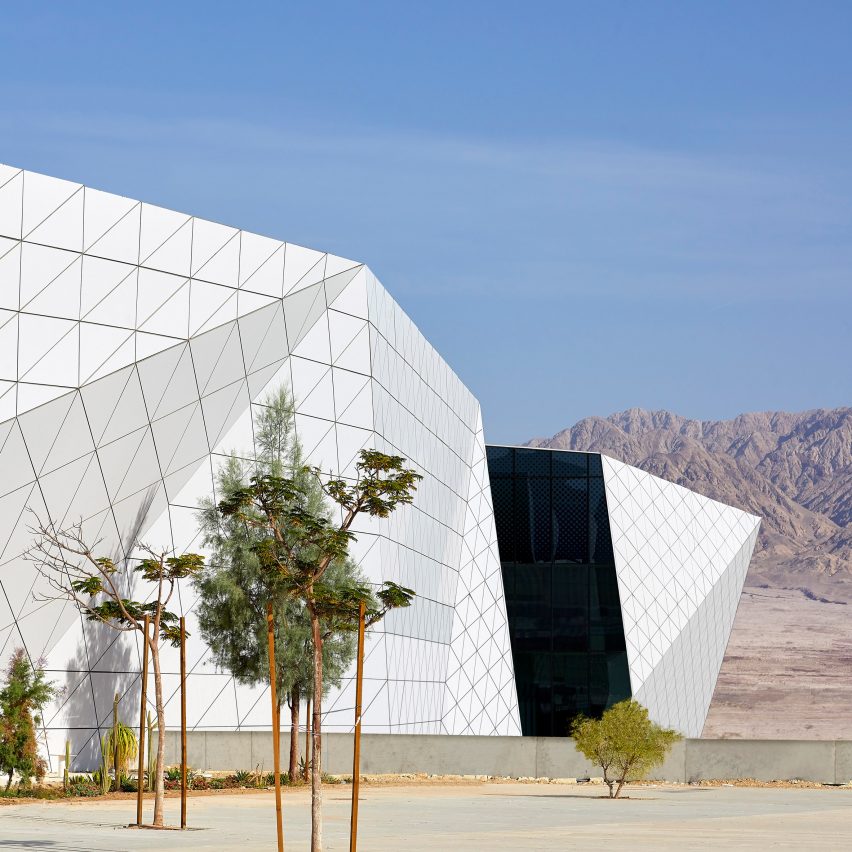 Panels of white aluminium envelop the exterior of this airport, designed by Amir Mann-Ami Shinar Architects and Moshe Zur Architects in the Negev desert.

Located 12 miles north of the city of Eilat, Israel, Ramon Airport is expected to become a “major game changer for local and international tourism” to Israel, Jordan and Egypt’s Sinai desert, according to the practices.

The airport sits on 506 hectares of arid land, and is characterised by its bright faceted facades that Amir Mann-Ami Shinar Architects with Moshe Zur Architects modelled on desert rock formations. 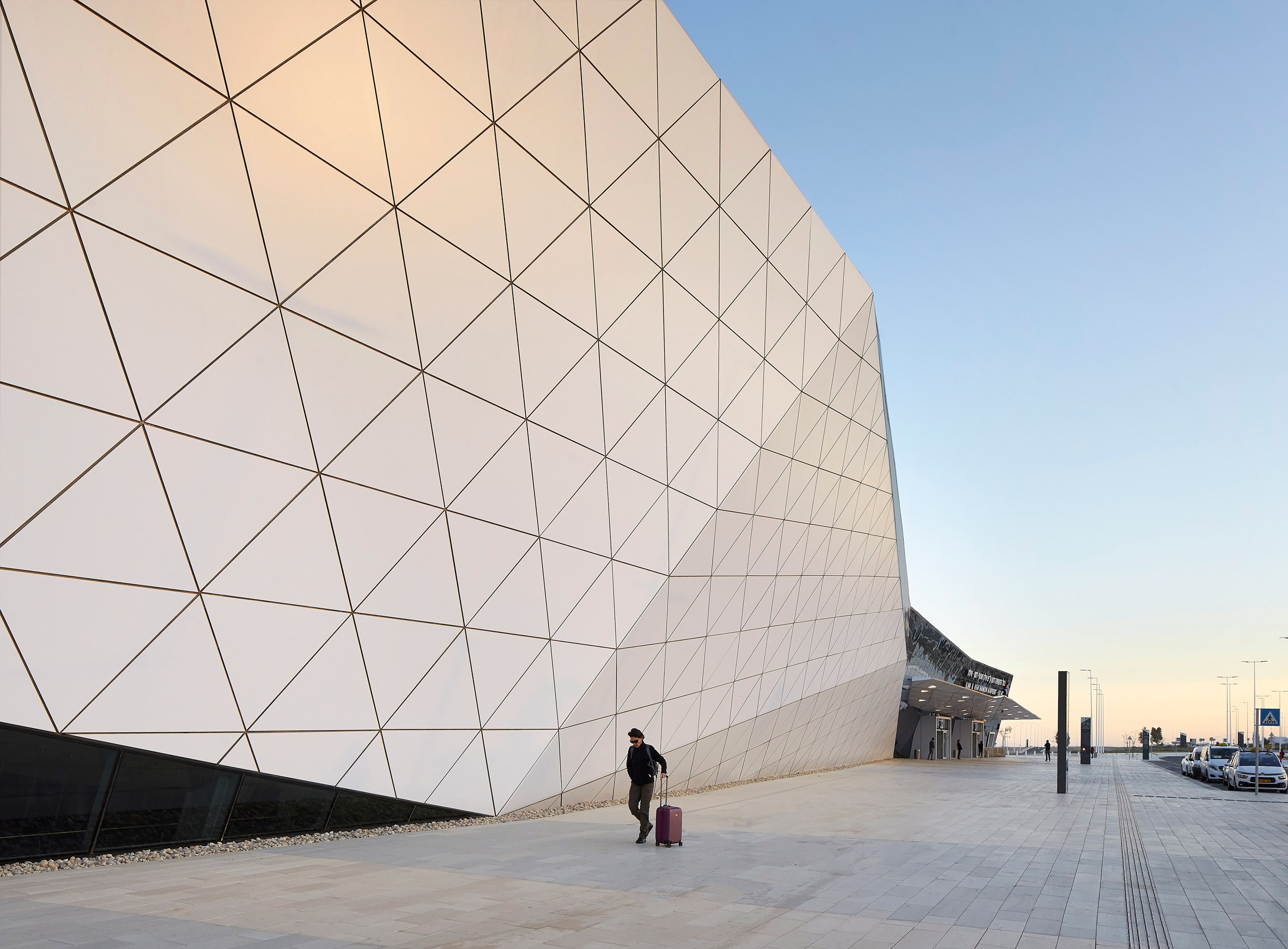 “In designing the airport we learned from the desert scenery. It required a vision of the most suitable design solution that responds to the existing landscape and climate,” explained project design manager Amir Mann.

“Our objective was how not to compete with the overwhelming emptiness of the site, while creating a place that welcomes passengers through the departure and arrival processes, reflecting through that experience the uniqueness of the desert environment, as a functioning international southern gate to Israel.” 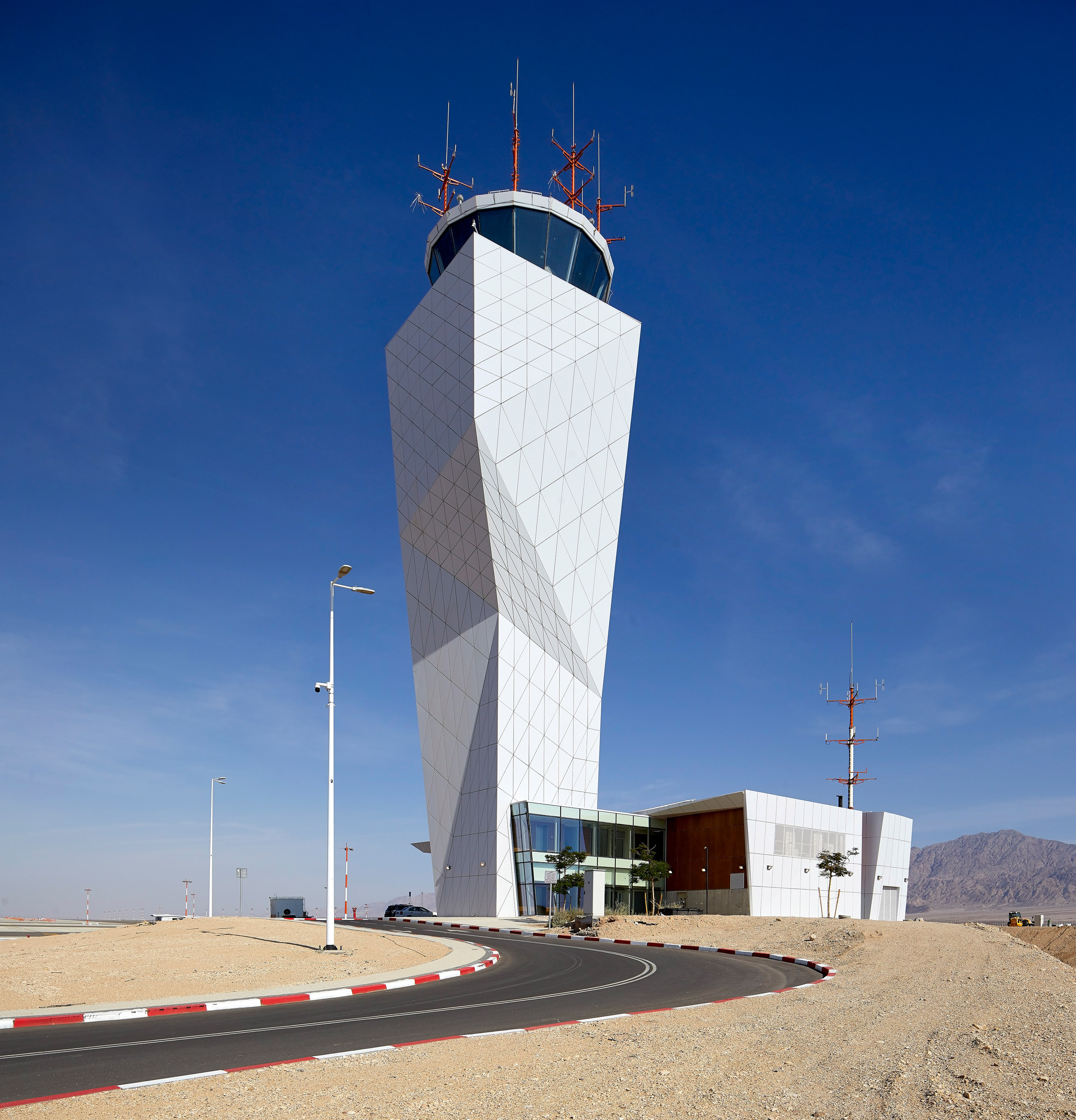 Ramon Airport comprises a 45,000-square-metre terminal building, alongside a 45-metre-high air-traffic control tower, 3,600 metres of runway and taxiway, and 40 aprons for parking aircraft.

The terminal is also flanked by two 300-metre-long steel structures that conceal office buildings, storage and service facilities, as well as space for operational and baggage-handling vehicles. 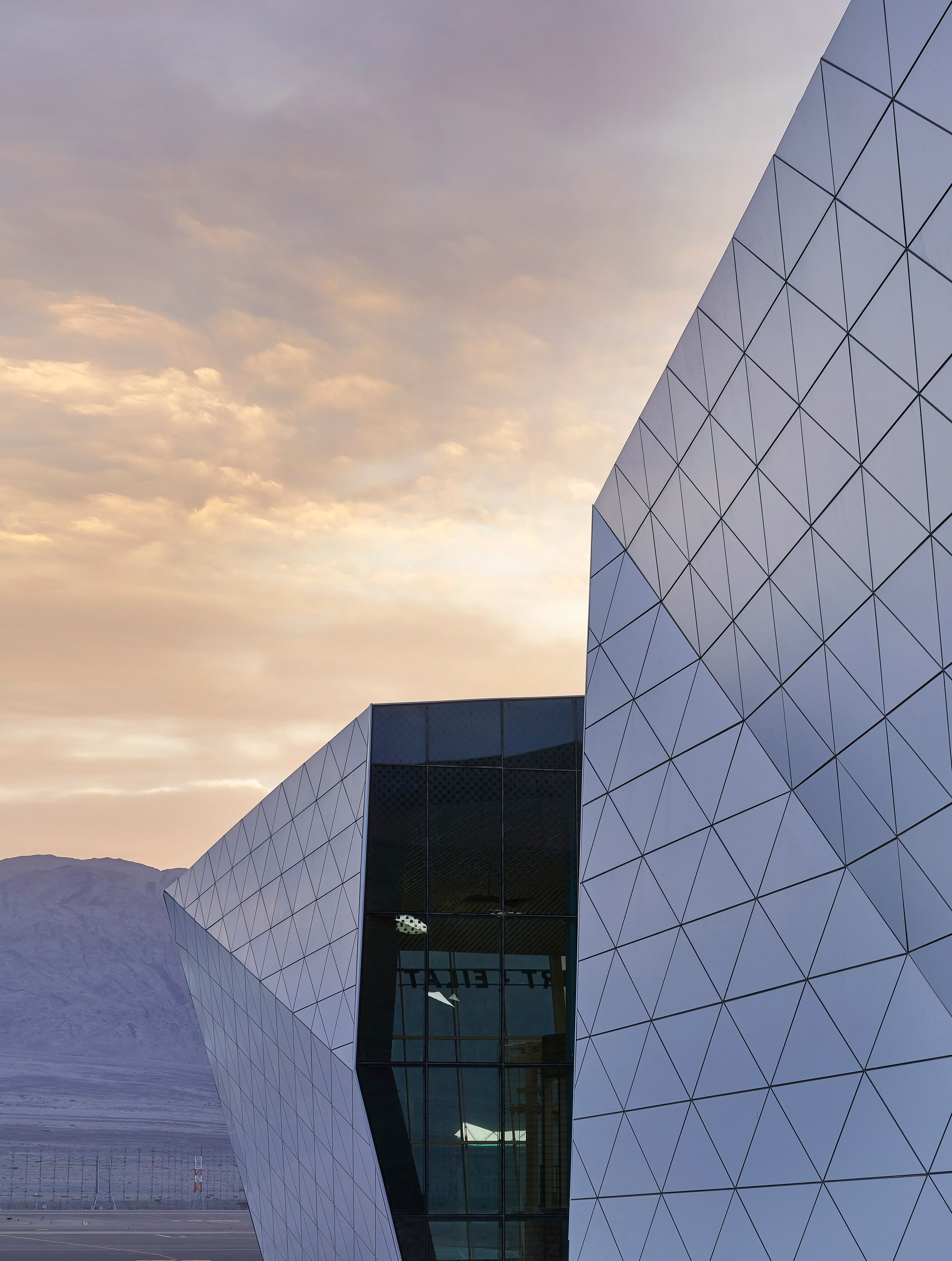 The buildings are unified by the white panels that span the walls and roofs, which are made from insulating aluminium.

Amir Mann-Ami Shinar Architects and Moshe Zur Architects designed these panels and their combined form to resemble the mushroom-like rocks found in Israel’s Timna Park, enabling the building to self-shade by reflecting light.

Inside the passenger terminal, the faceted shell is broken by glass curtain walls that mark the entrances and boarding areas, and frame views towards the runway and desert backdrop.

Teamed with a giant lightwell that punctures the centre of the building, they are also designed by Amir Mann-Ami Shinar Architects and Moshe Zur Architects to negate the need for skylights that are commonly used in airports, but not suited to the desert climate. 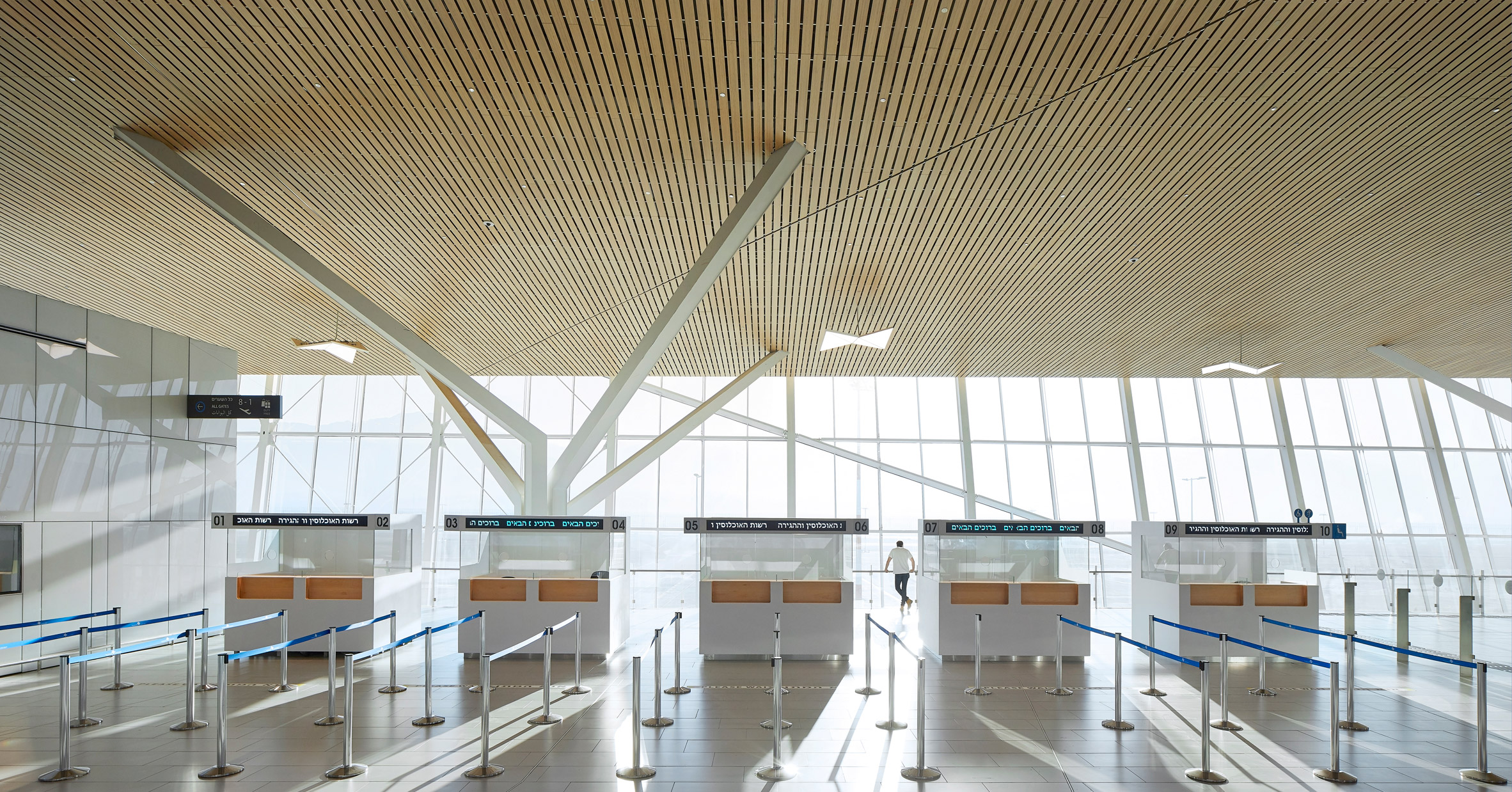 The passenger terminal is complete with a minimal interior and high-ceilings, designed to contrast with the building’s exterior. Bamboo lines the ceiling and walls, extending down to the floors.

Low-lying furniture and pavilions act as partitions, designed by the architecture studios to echo the architecture of Mies van der Rohe. Meanwhile the service areas, including baggage handling and security processes, are all hidden on a lower level. 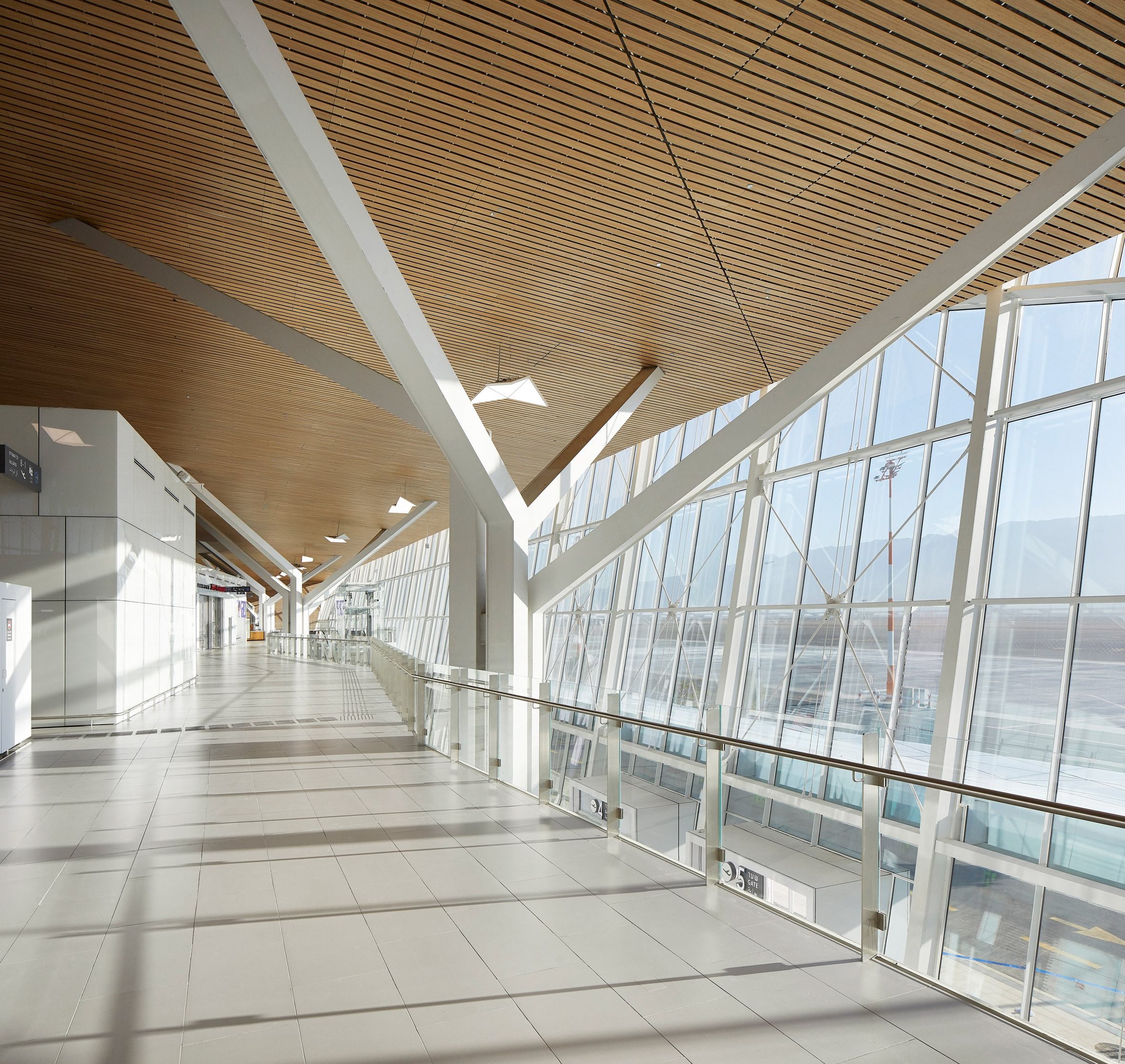 At the front of the terminal, the carpark and walkways are intended to resemble a river delta – a natural land formation caused by sediment dropping at the mouth of a river as it slows to enter another body of water.

Meanwhile, to help the airport blend with its surrounding landscape, all the sand and rock excavated in its construction was used to construct the runways, hardstands for aircraft parking, and roads.

Plants were also harvested prior to construction, and grown and incubated in greenhouses, allowing them to be replanted in their original positions upon completion of the project. 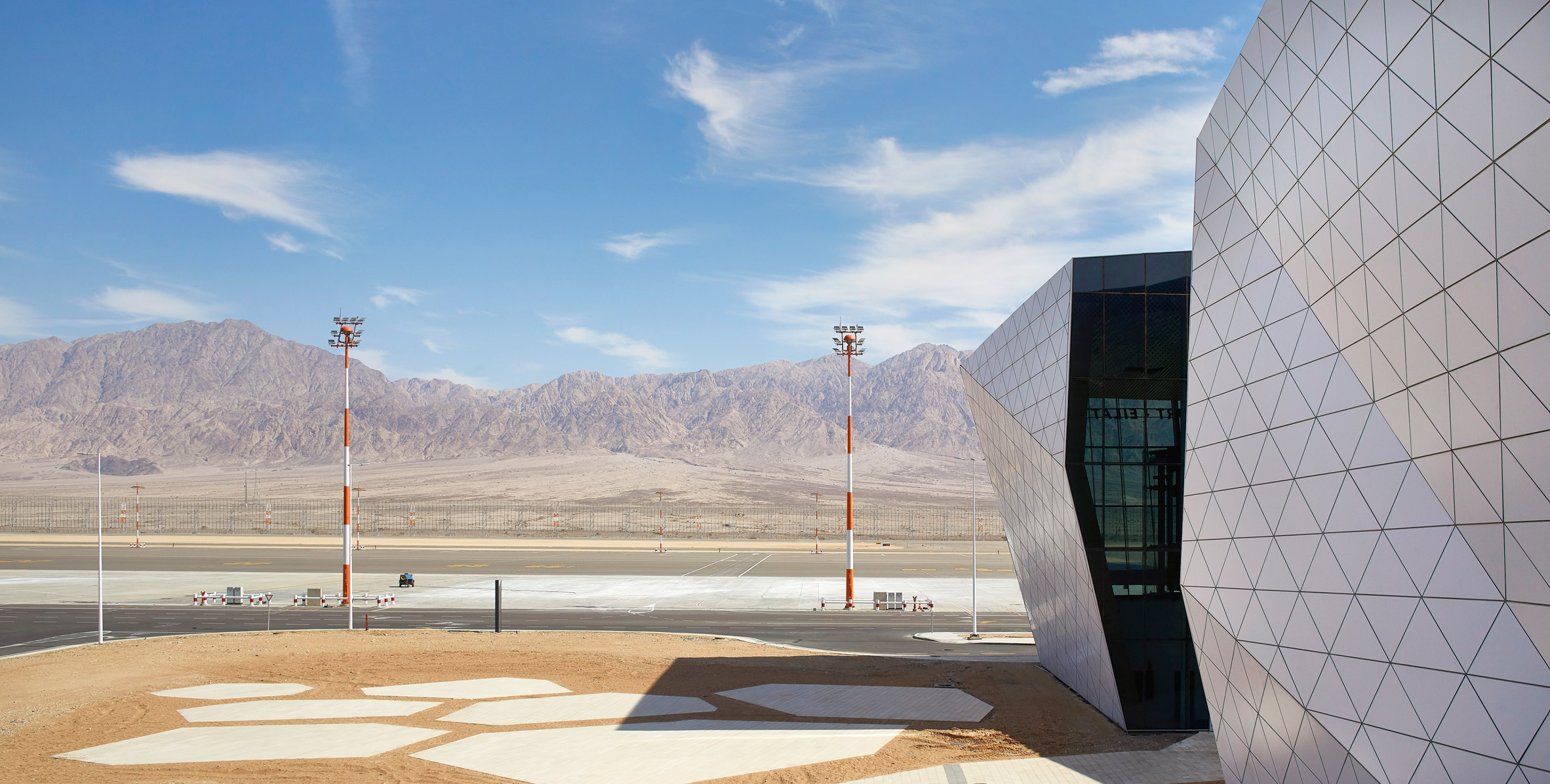 Elsewhere in Israel, John Pawson recently completed the overhaul of an ornate convent and hospital into a hotel, and Studio Fuksas revealed its designs for the “largest conference centre in the Middle East”.