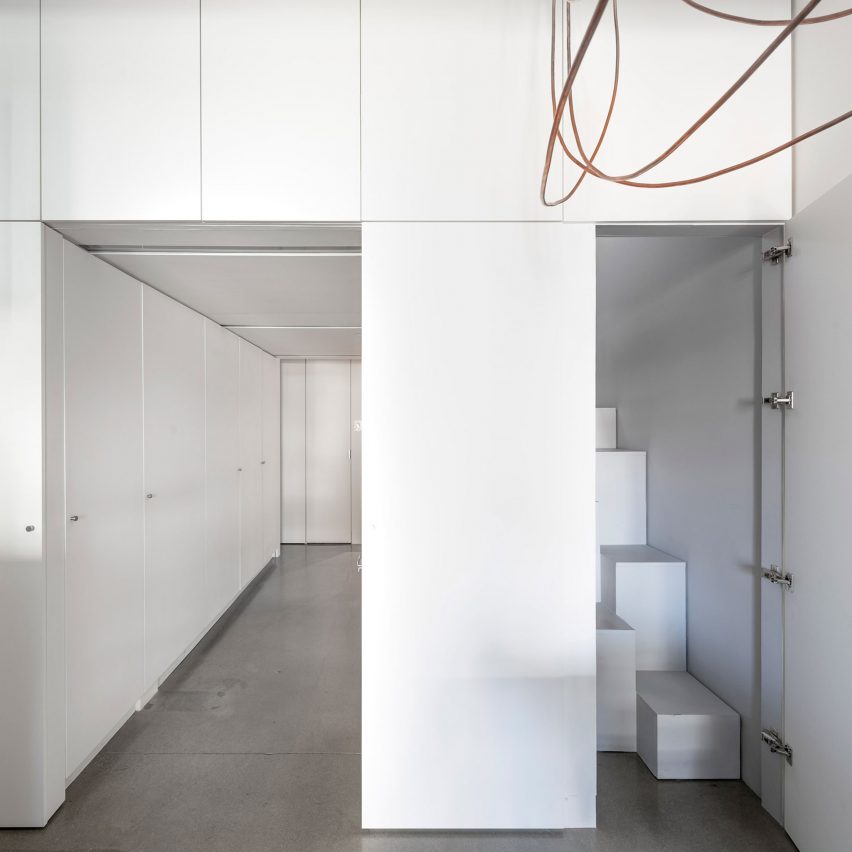 A hidden sleeping loft and an all-white hallway lined with closets are among the features in a renovated Vancouver apartment designed by Canadian firm Falken Reynolds.

The project, called The Igloo, is located within the city’s historic Gastown neighbourhood. Designed for a young couple, the 580-square-foot (54-square-metre) apartment formerly had a more traditional appearance. 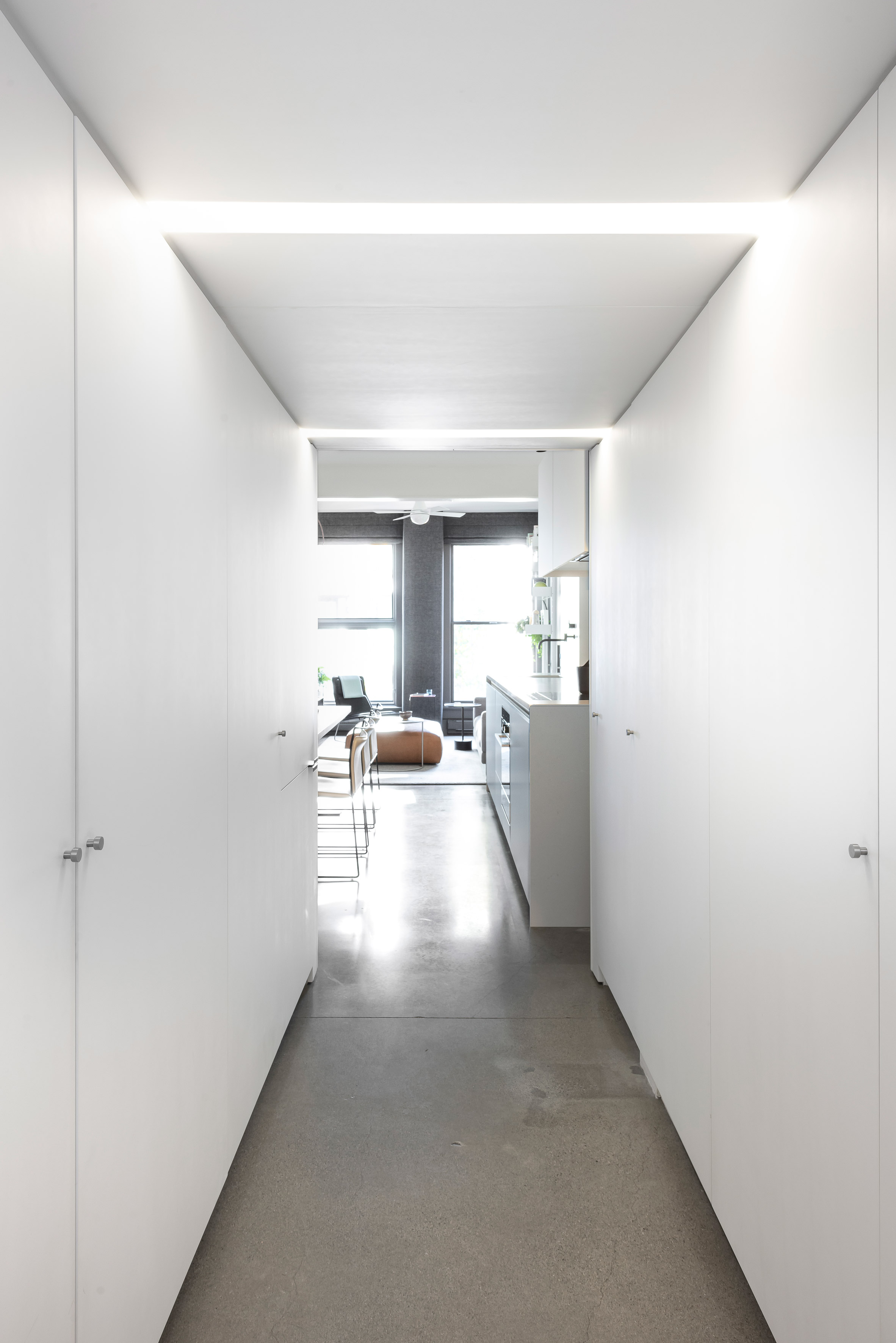 “One of the first rules for a minimalist interior is creating loads of storage,” said firm principal Chad Falkenberg in a project description. 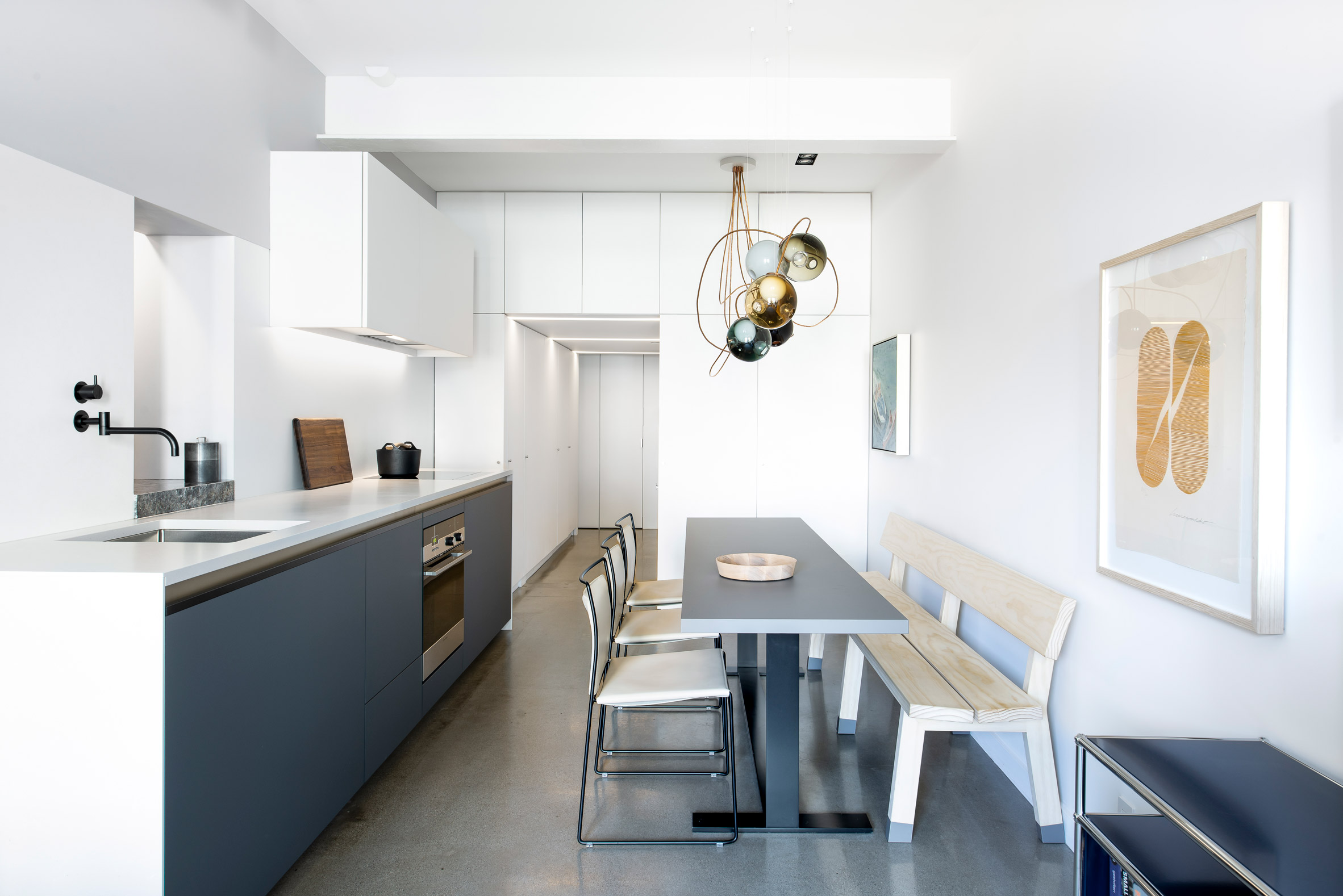 For inspiration, the team turned to the igloo – an enclosure that features a compressed entry vestibule that connects to a simple, open chamber. The firm loosely mimicked this configuration by creating a long corridor that leads into the apartment’s main living area. 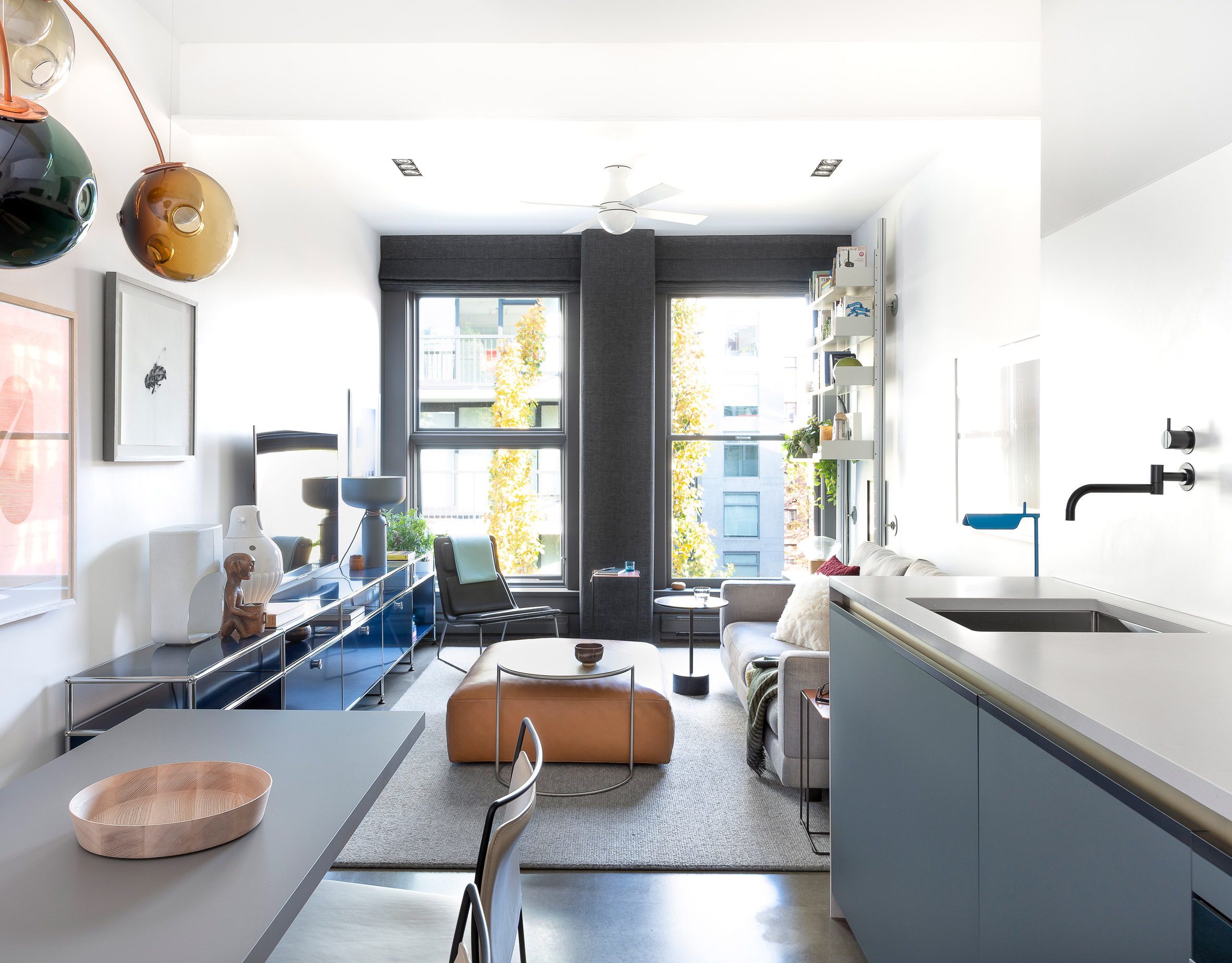 The hallway is lined with white, flat-panel doors that open to reveal a washer and dryer, drying cabinet, fridge, food pantry and two five-foot-high (1.5-metre) closets. In addition to providing storage, the corridor evokes the feeling of “entering a warm protected space” according to firm principal Kelly Reynolds. 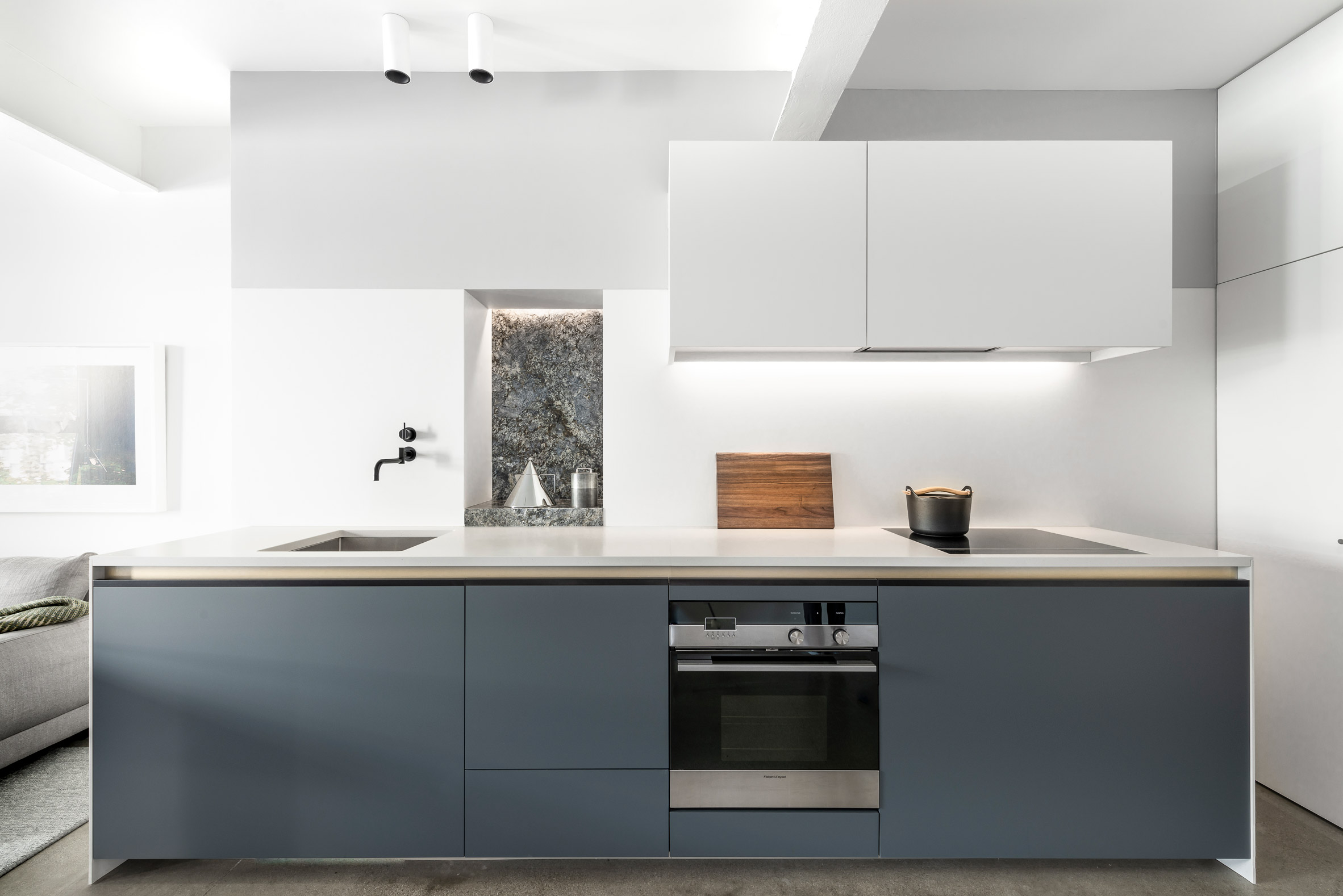 Above the hallway, the team created a sleeping loft that is hidden from view. Around the corner is a door, which one opens to access the loft. Blocky steps lead to the low-ceiling sleeping nook, which accommodates a double bed, shelving and a bedside table.

“Elevated above all the storage, a Japanese-inspired loft bed provides privacy for sleeping,” the studio said. 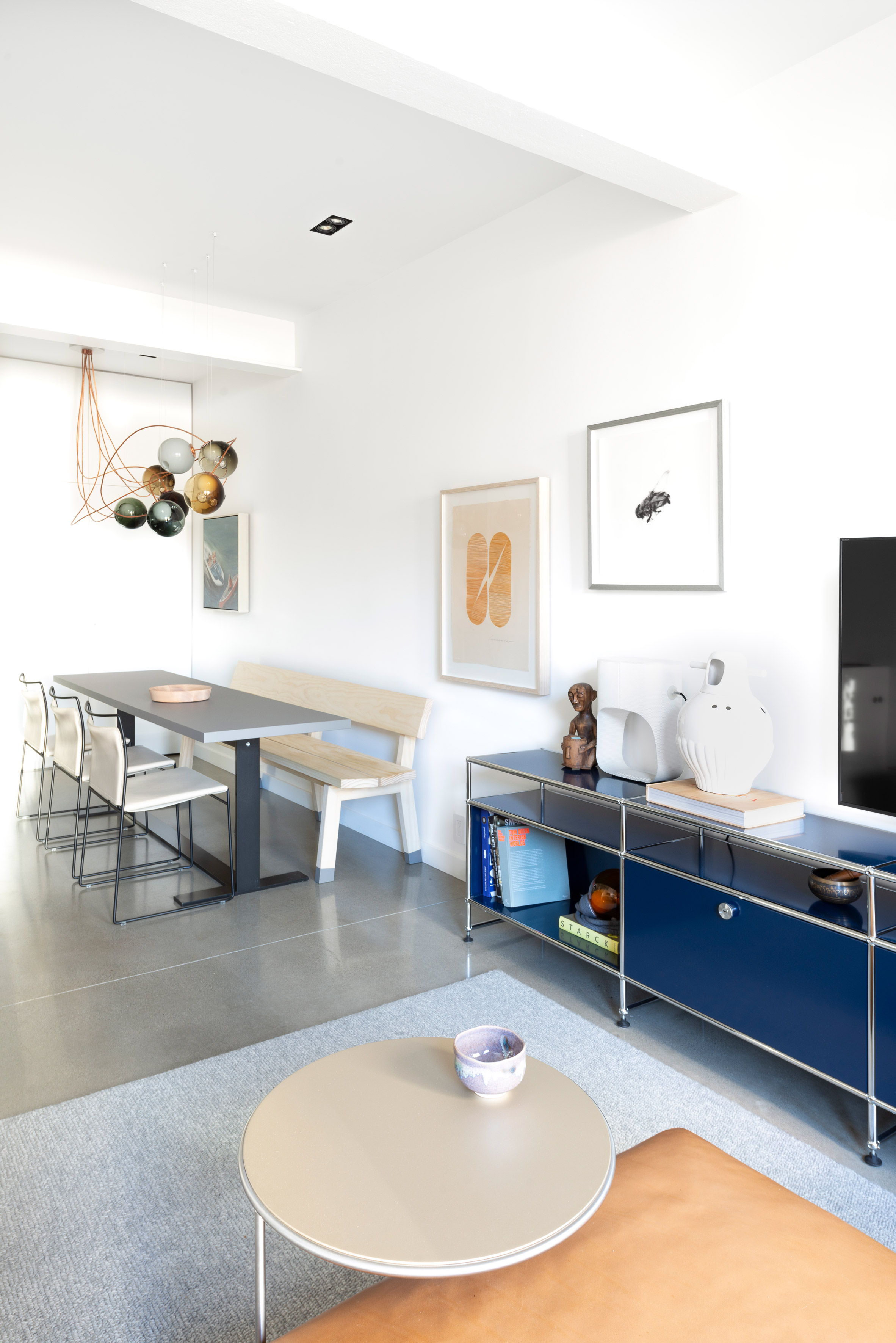 The team continued the austere look in the kitchen. By placing appliances and food storage in the hallway, the team was able to create a more open and airy cooking area.

Details such as integrated pulls, matte panels and a wall-mounted faucet further “reduce the size of the kitchen and make it visually fade to the background”. 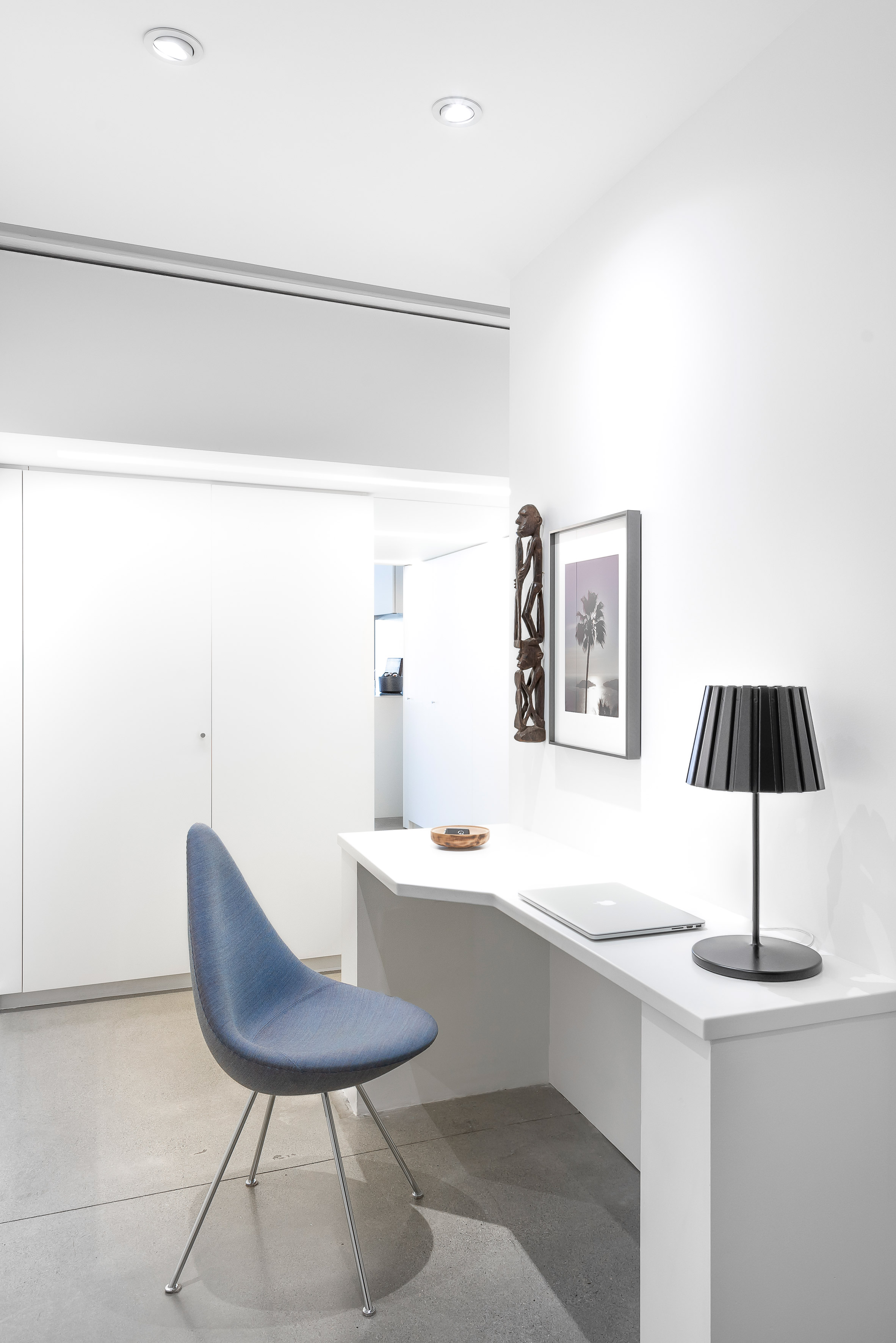 Adjacent to the kitchen is the dining area, which is meant to serve as a focal point in the apartment. Suspended over a six-seater dining table is Bocci 28.7 chandelier, which consists of blown-glass spheres that “create dramatic movement and provide a warm glow”.

Beyond the cooking and dining area is the living room, where the minimalist approach gives way to a homier atmosphere. 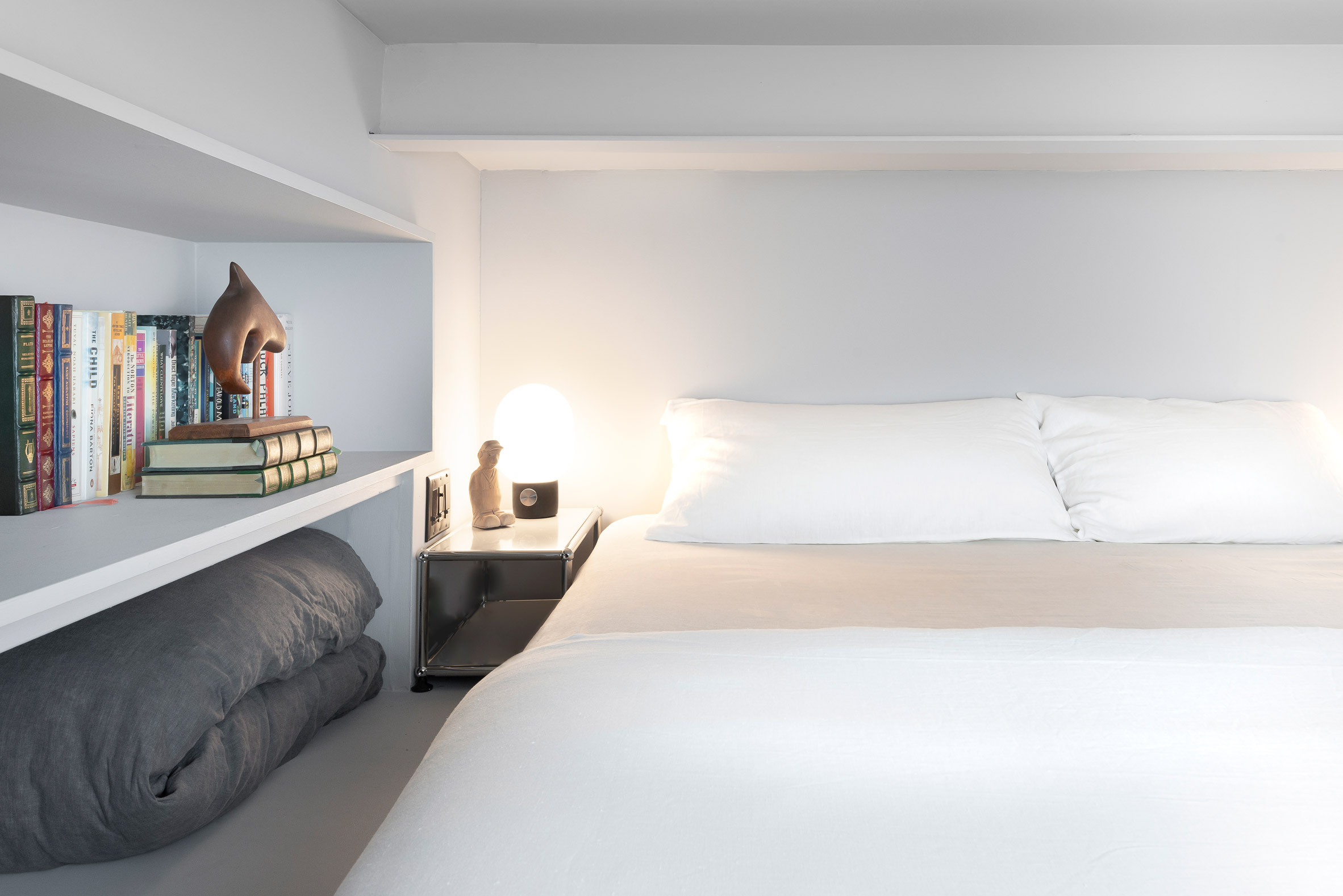 Lining one wall is a low-lying, USM Haller modular unit that accommodates a television and personal items. On the opposing wall, a tall shelving system is filled with books and a lush houseplant.

The living room is fitted with a grey sofa, a leather ottoman and several side tables. Pieces of contemporary artwork hang on the walls, including a framed photograph of a goat above the sofa. 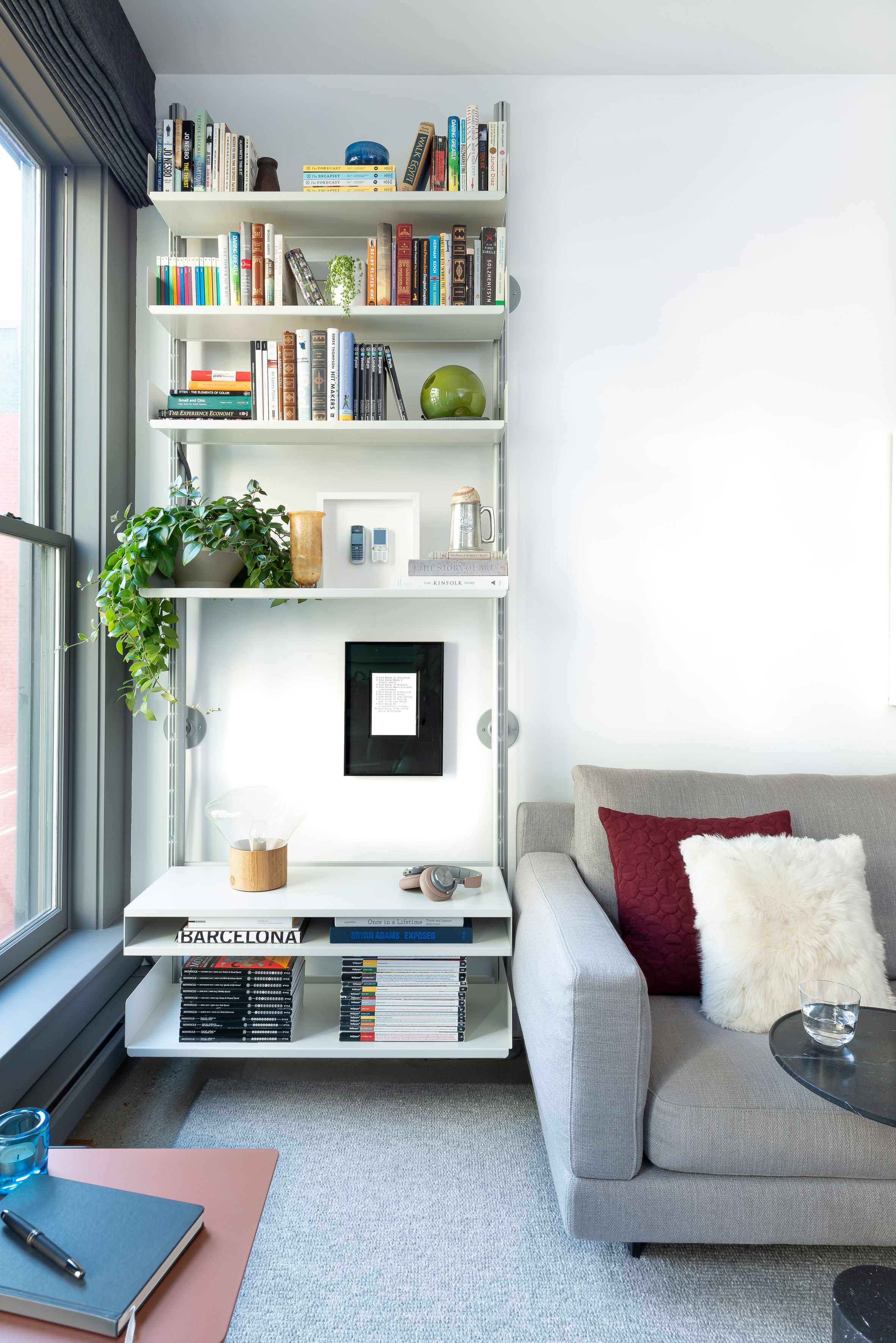 “In a small space, most people find it counterintuitive to build in a lot of millwork and use large pieces of furniture,” the team said. “But using large bold gestures actually makes the space feel larger.”

Founded in 2012, Falken Reynolds focuses on private homes, retail, hospitality and product design. Other Vancouver projects by the studio include a townhouse that fuses contemporary and historic details and an apartment with pale woodwork, bright white surfaces and 11 skylights.

Photography is by Falken Reynolds.