Architecture studio Family New York has completed this Brooklyn store for record label Fool’s Gold, which features polycarbonate screens that frame a gold mirror and form niches that include a DJ booth.

The Fool’s Gold store on 147 Grand Street in Brooklyn sells the label’s branded clothing, including sportswear, hats, and accessories like phone cases and bags, as well as vinyls and CDs. 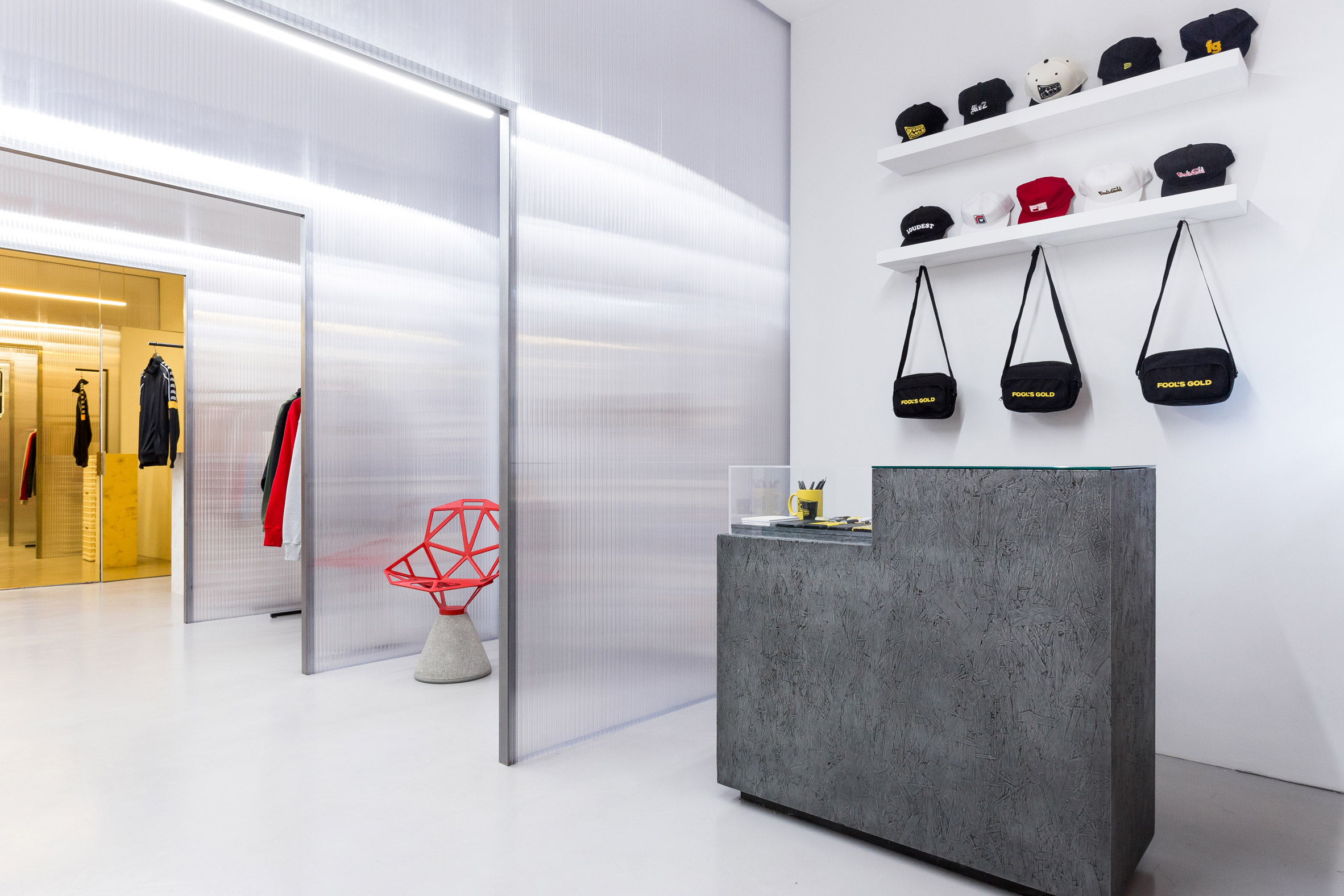 Its opening earlier this year marks the 10th anniversary of the label founded by DJ A-Trak, which previously had a smaller shop, while also selling online.

Fool’s Gold tasked local studio Family New York to design the new, larger 500-square-foot (46.5-square-metre) space with the aim to make it “unlike any record store”, and set apart from the stripped-back, minimalistic style of many clothing boutiques. 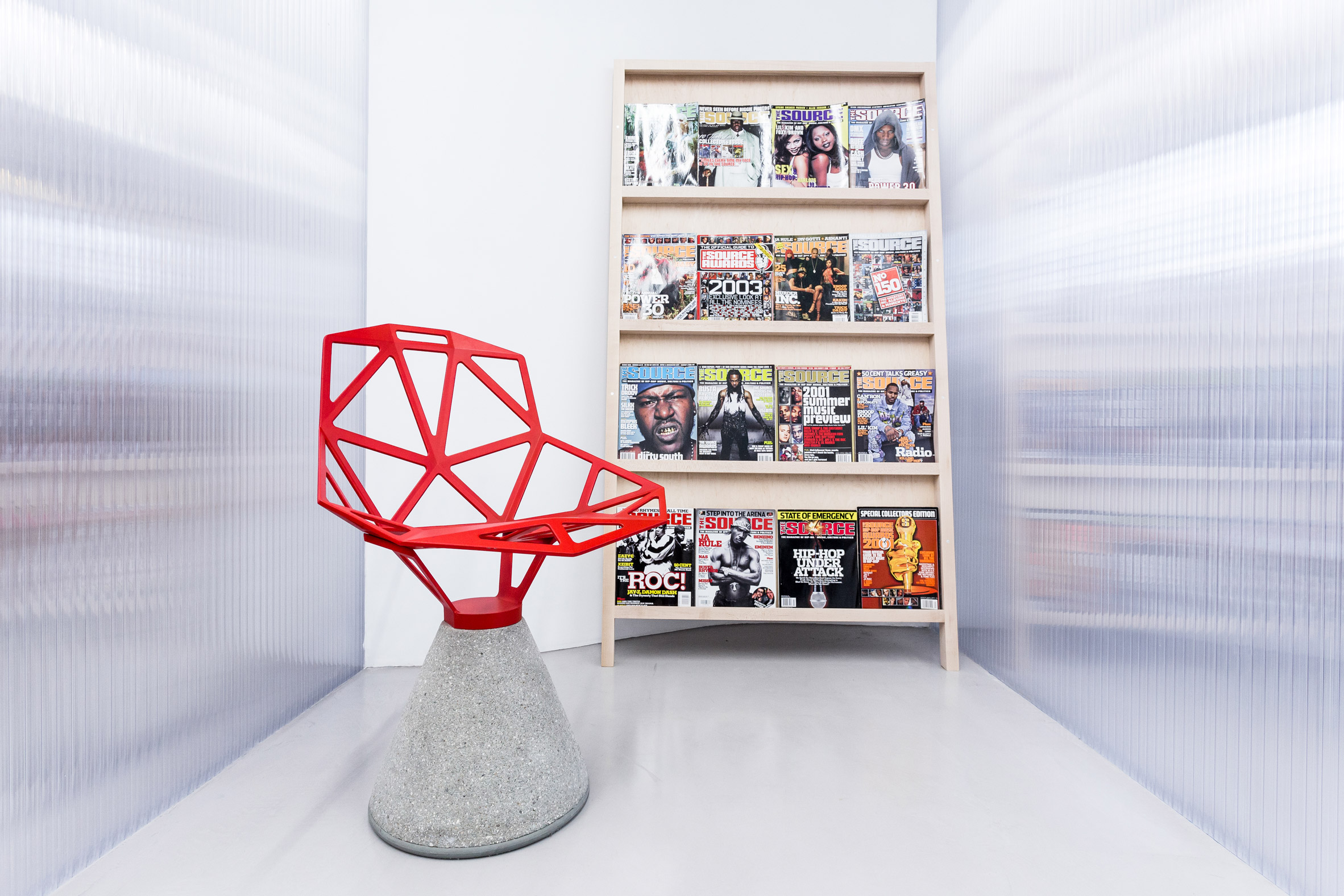 “None of our peer labels have brick and mortar spaces like this,” A-Trak told Dezeen. “If anything, lately everyone’s been doing pop-ups. We wanted a permanent space.”

“Even in clothing, a lot of stores are using the same tropes: white box, exposed wood, lots of plants,” he continued. “We wanted to stand out from that.” 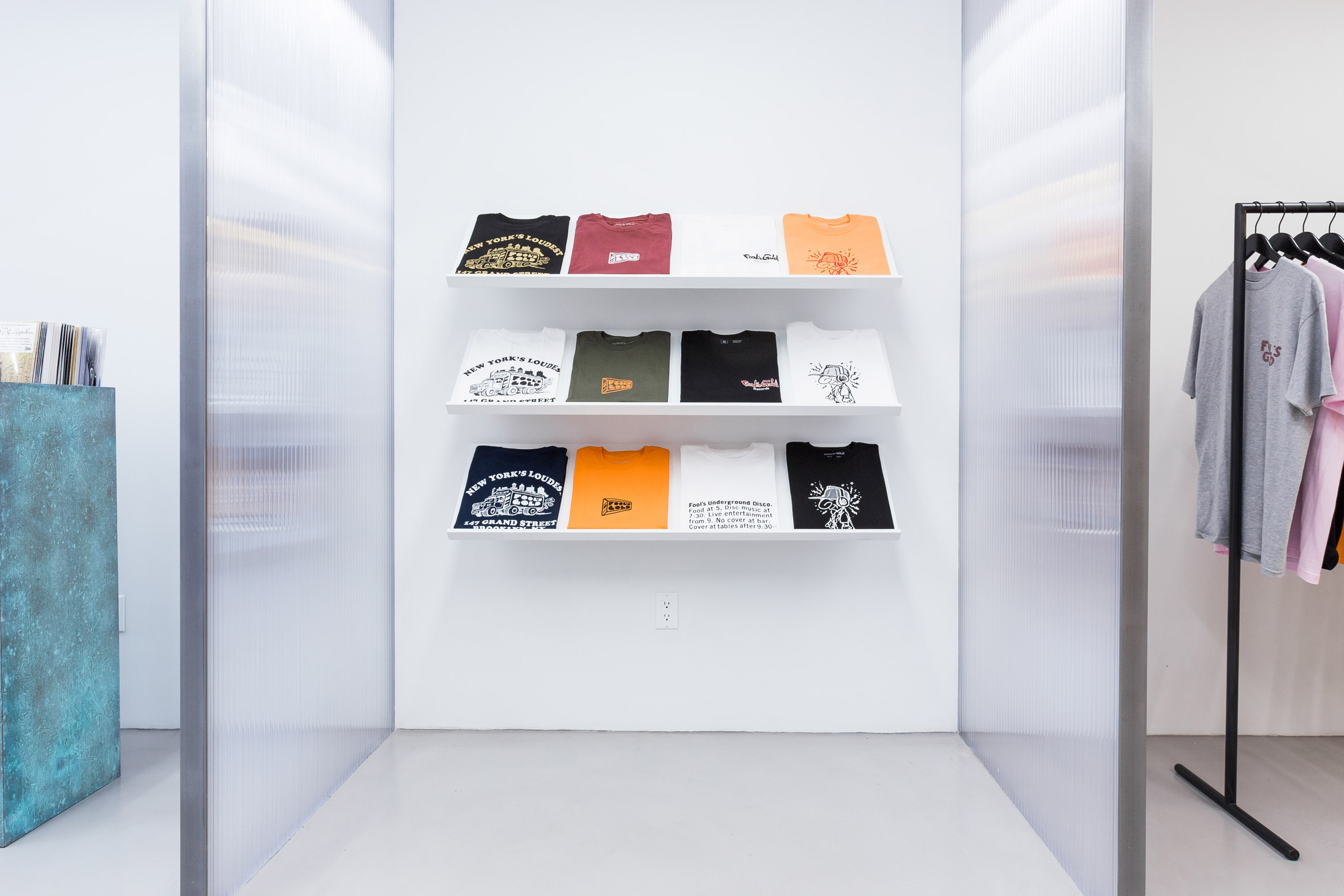 Fashion retailers often opt to showcase their garments in pared-back, sparse spaces to keep the focus on the clothes. Examples include Christopher Kane’s London store by John Pawson and Acne Studio’s shop in Seoul by Sophie Hicks.

Contrastingly, Family New York has filled Fool’s Gold’s space with polycarbonate screens that create different bays for records, clothes, magazines, a place to DJ and an area to sit around.

The triple-layered screens are punctured with the same-sized cutout to frame the golden mirror at the rear, which provides a reflection of each of the screens and the storefront, and makes the space appear larger than it is. 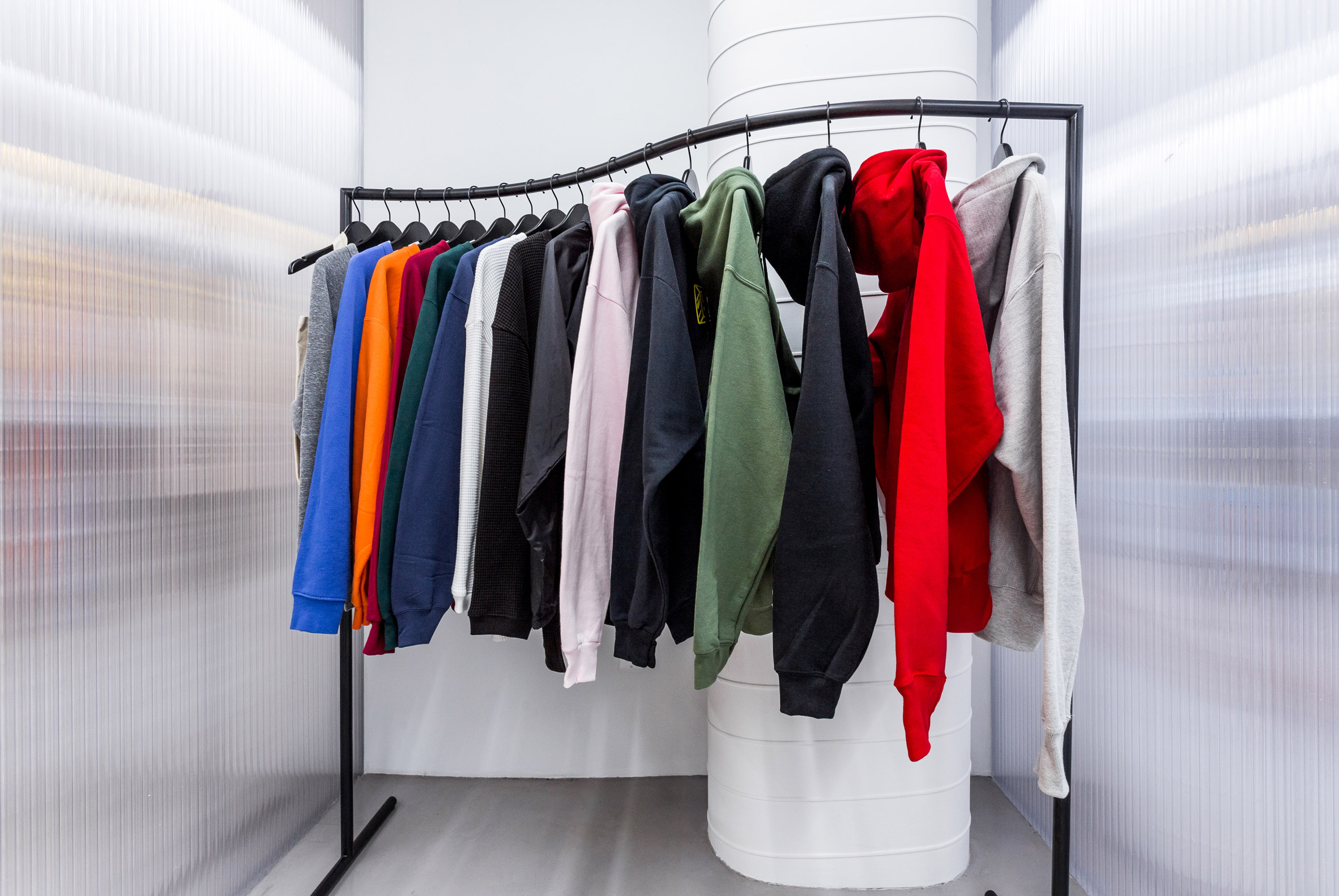 “The layout is an enfilade, with different display areas on the right and left of the centred openings, and a gold mirror at the back to extend the enfilade illusion,” he added.

“The enfilade was a good strategy for this since it gave more interesting moments to this small space, and created a striking visual moment right when you walk in or look in from the street.” 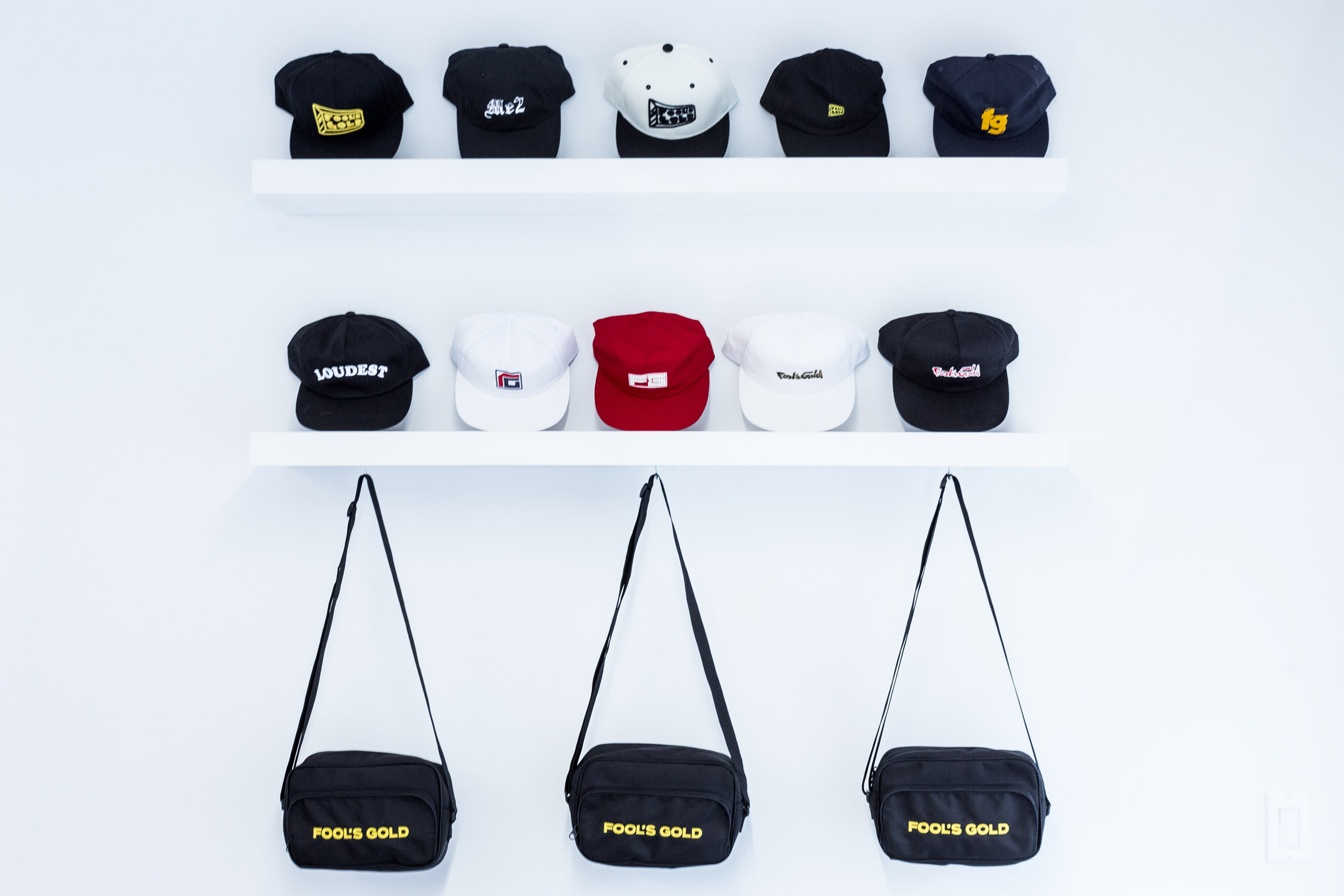 A-Trak said that the layout of the store also offers lots of “Instagram moments”. “The store becomes something that travels through photos and entices people to buy from the brand,” he said. 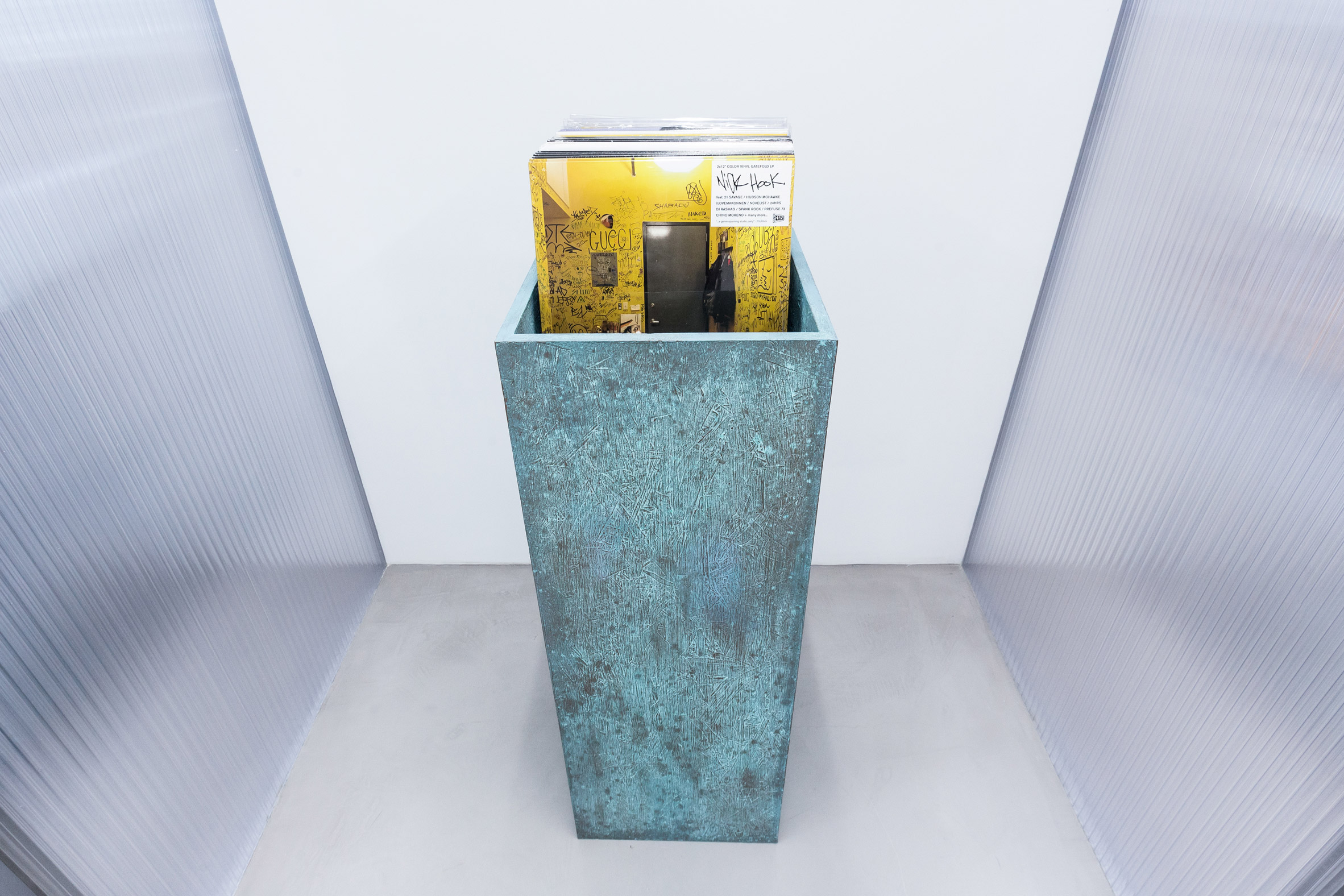 The record crates are made from milkcrates dipped in plaster, which A-Trak said makes the podiums look like an art installation.

“We wanted to take materials that had a certain nobility or cultural reference, but were overlooked – like rubber flooring or plaster – or used for mundane tasks – milk crates as record storage – and pervert them with abstracted material processes and geometric forms,” The Principles told Dezeen. 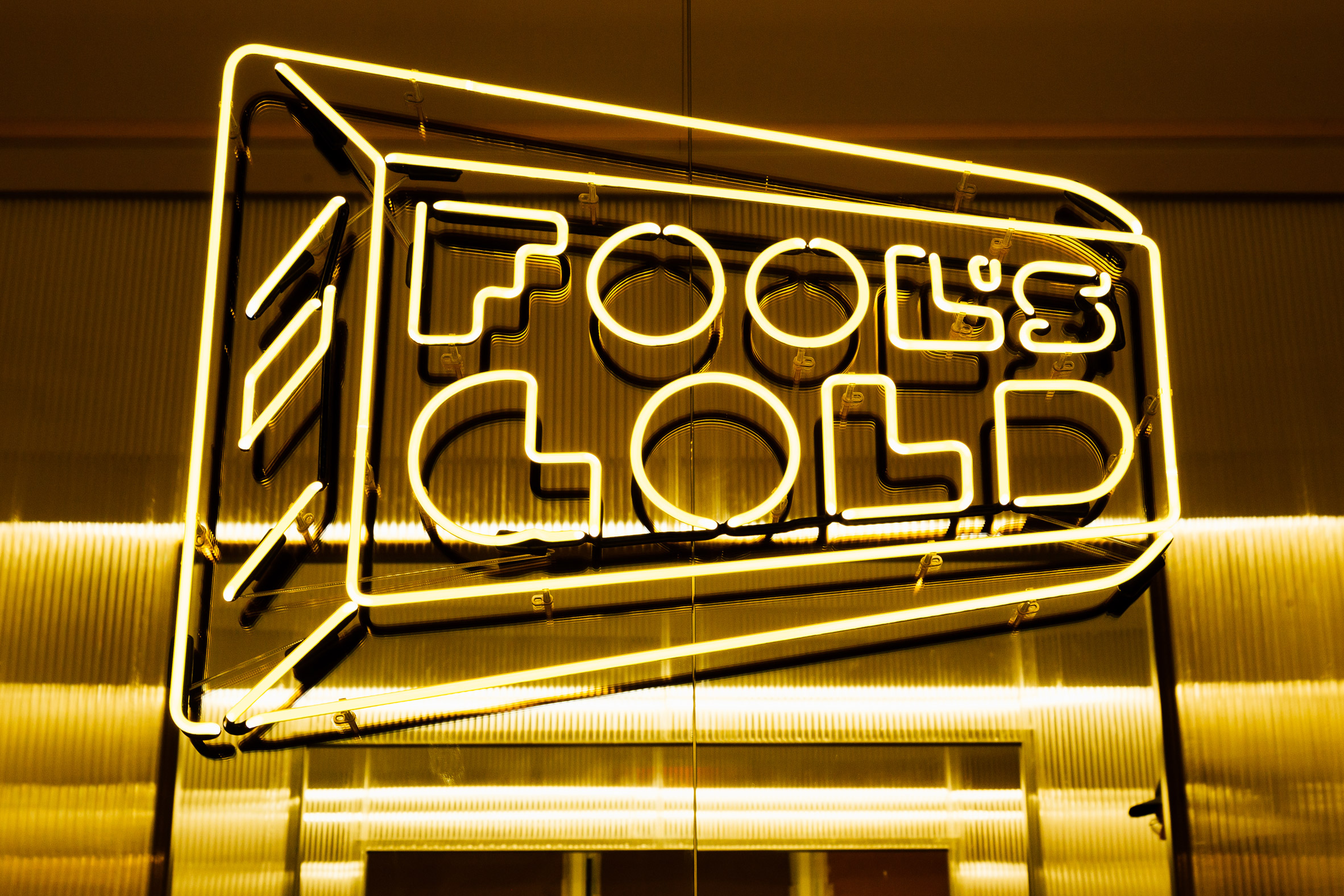 Other materials used include wooden record stands, which are copper-coated and oxidised to create a patina, and plaster-coated plywood. At the front of the store, the flakeboard desk is covered in zinc that has been blackened and polished.