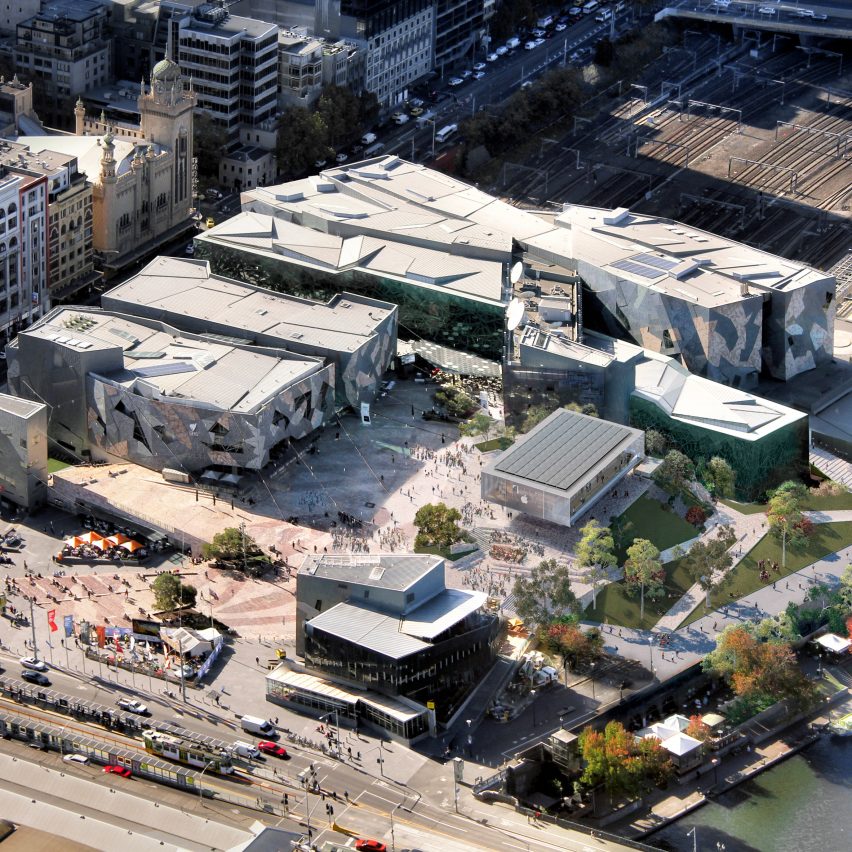 A controversial Apple Store designed by Foster + Partners for Melbourne’s Federation Square has been cancelled after plans were blocked by Australian heritage authorities.

Heritage Victoria ruled against plans put forward by Federation Square management to knock down the Yarra Building, one of the existing structures on the publicly owned plaza, to make way for a AUS$50 million (£27 million) store for the tech giant.

“If the application were approved, and the Yarra Building demolished and replaced with the proposed building, it would result in an unacceptable and irreversible detrimental impact on the cultural heritage significance of Federation Square,” said Steven Avery, executive director of Heritage Victoria.

A spokesperson for Apple told the Sydney Morning Herald that the company was “disappointed” by the ruling.

Foster + Partners had submitted a re-design of its concept for the flagship Apple Store in 2018, after thousands of people signed a petition against what campaigners dubbed the Pizza Hut Pagoda. However, its more streamlined design also failed to win over opponents.

The news was welcomed by campaigners who have opposed the development of the store, which was first approved in 2017.

“This is such wonderful news for Fed Square and a win for the community,” said Tania Davidge, president of campaign group Citizens for Melbourne.

“The Apple Store proposal would have changed not only Fed Square’s physical form but also its character – it would have undermined its civic and cultural purpose,” she added.

Plans for the Apple Store had faced fierce opposition from the outset, after the local government approved the scheme and made it exempt from a public consultation due to the projected “economic benefits” for area.

Citizens for Melbourne rallied against the plans, setting up the campaign Our City Our Square after online petitions against the scheme gathered over 100,000 signatures. The campaigners stressed they were “not anti-Apple” but were opposed to any corporate takeover of public space in the city.

The Australian state’s National Trust nominated Federation Square to the Victorian Heritage Register in 2018, forcing Federation Square management to apply – and be refused for – a permit to demolish the Yarra Building.

“We do not oppose commercial activation and development at Federation Square which respects its cultural and architectural significance, however the proposal fell far short of meeting these aims,” said Simon Ambrose, chief executive of National Trust Victoria.

Lab Architecture Studio, Karres en Brands Landscape Architects and Bates Smart designed Federation Square, with its distinctive deconstructavist-style facades of shattered sandstone, zinc and glass, on a deck balanced over a railway line. The 38,000-square-metre plaza opened to the public in 2002.

Federation Square’s addition to the Victorian Heritage Register will be finalised at the end of the month.

Foster + Partners has designed a succession of Apple Stores around the world. Recent openings include a glass and stone store wrapped in bamboo for Macau, and a store with an entrance through a fountain in Milan.

In Stockholm the development of another Apple Store designed by Foster + Partners also looks likely to be blocked. The store, which would replace a TGI Friday’s restaurant in Kungsträdgården, is one of several major projects on hold in the city after a change in control of the Swedish capital’s council.