Fizzing bubbles, popped corks and vineyard colours are referenced inside this restaurant and bar in Victoria, which Foolscap Studio overhauled for champagne brand Moët & Chandon.

Domaine Chandon is located in the vineyard-rich region of Yarra Valley, and has been producing both still and sparkling wines since the early 1980s.

Melbourne-based Foolscap Studio has revamped and merged the site’s tasting, dining and retail spaces. They are now decked out in colours and materials that reflect the process of winemaking and seasonal changes in the surrounding landscape. 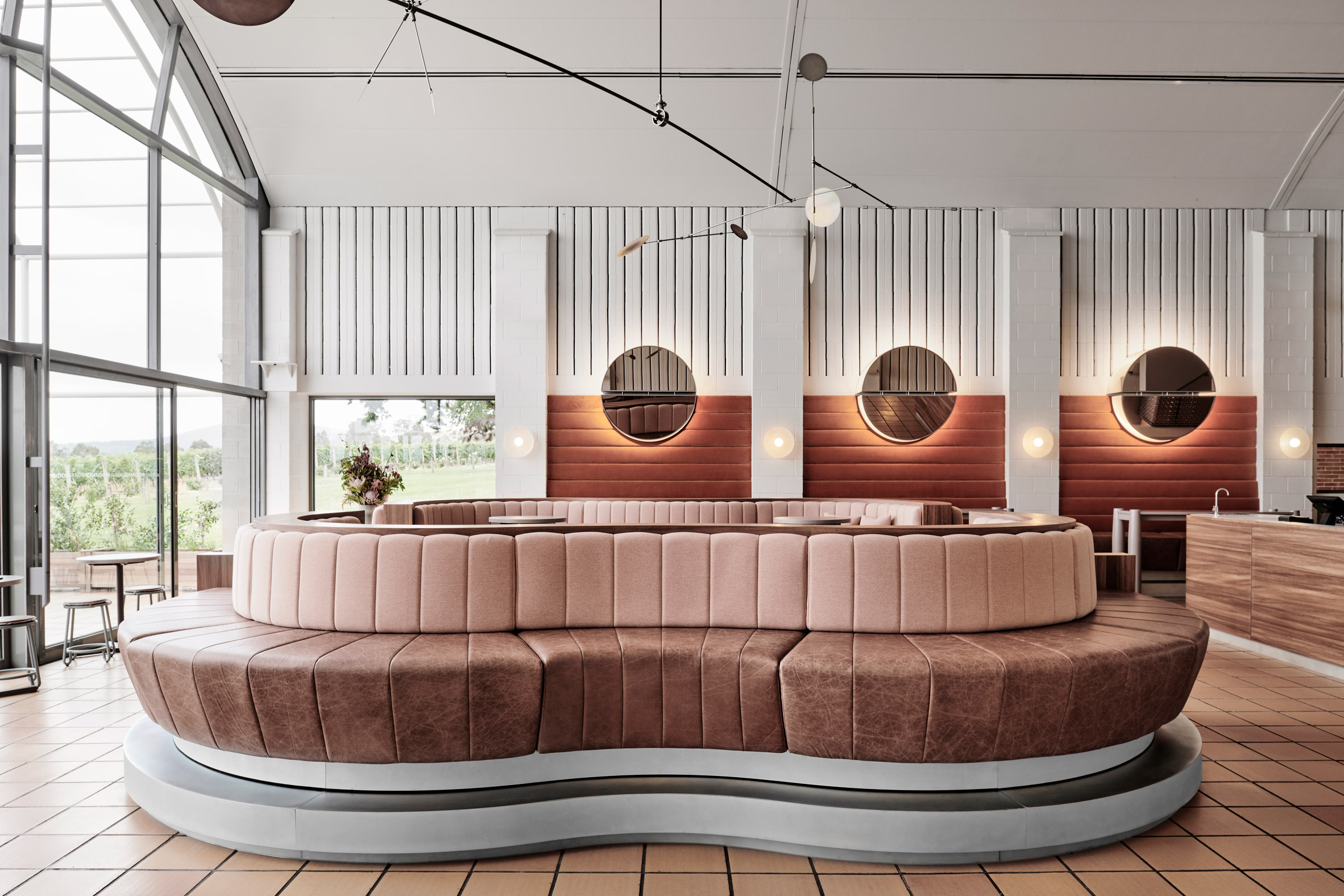 “This was a new approach for Chandon Australia who had previously focused on product-driven experiences,” explained Madeline Freeman, senior interior architect at Foolscap.

“The diversity of experiences possible in the venue required due consideration be given to encouragement of individual Chandon ‘moments’, while retaining cohesiveness across all spaces,” she told Dezeen. 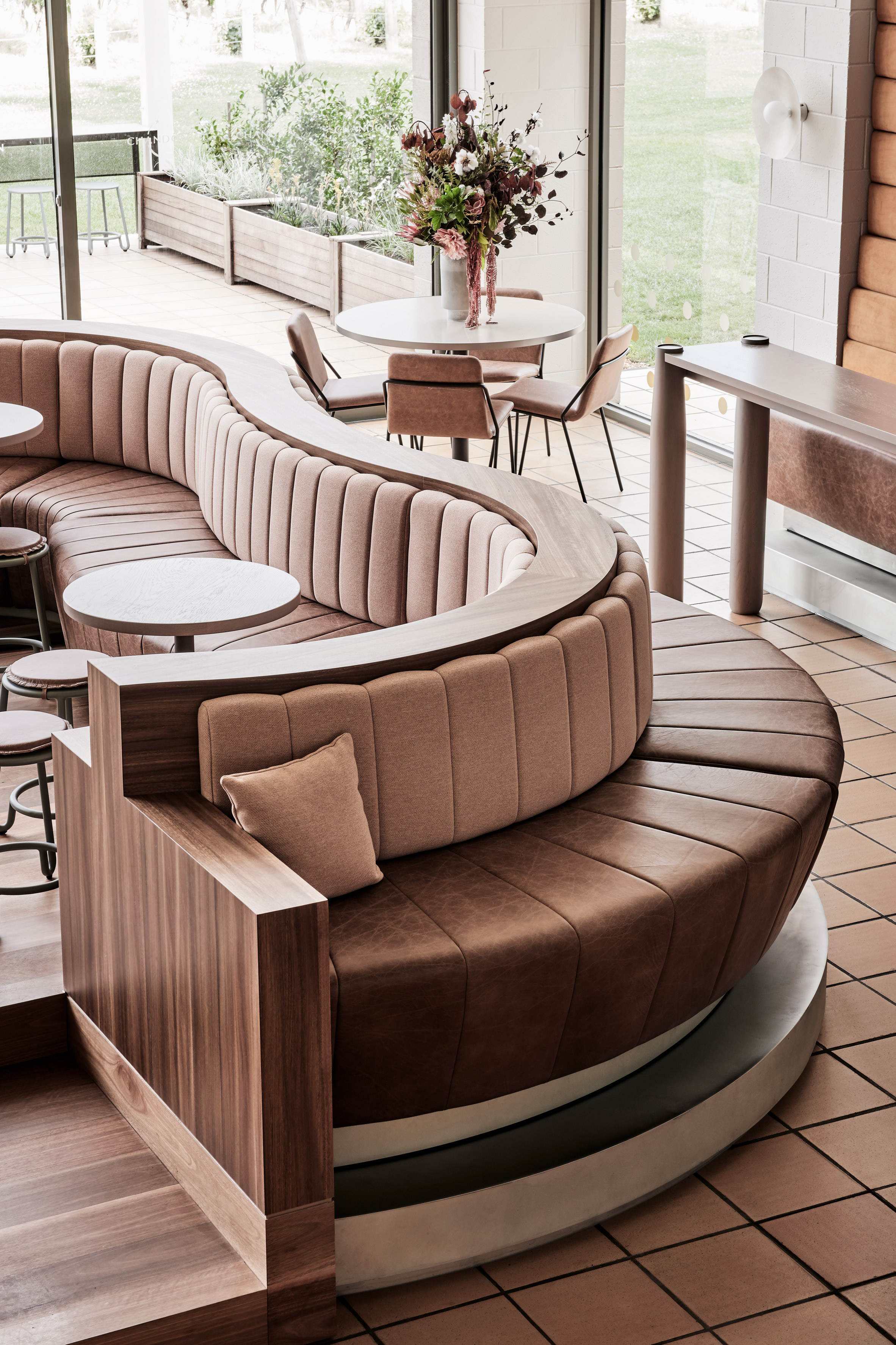 Hues similar to autumn leaves are applied throughout the main bar room, which is centred by a huge undulating seating booth.

Chairs are dusky pink, bench cushions are made from worn brown leather, and suede-like terracotta panels are integrated into the peripheral walls. 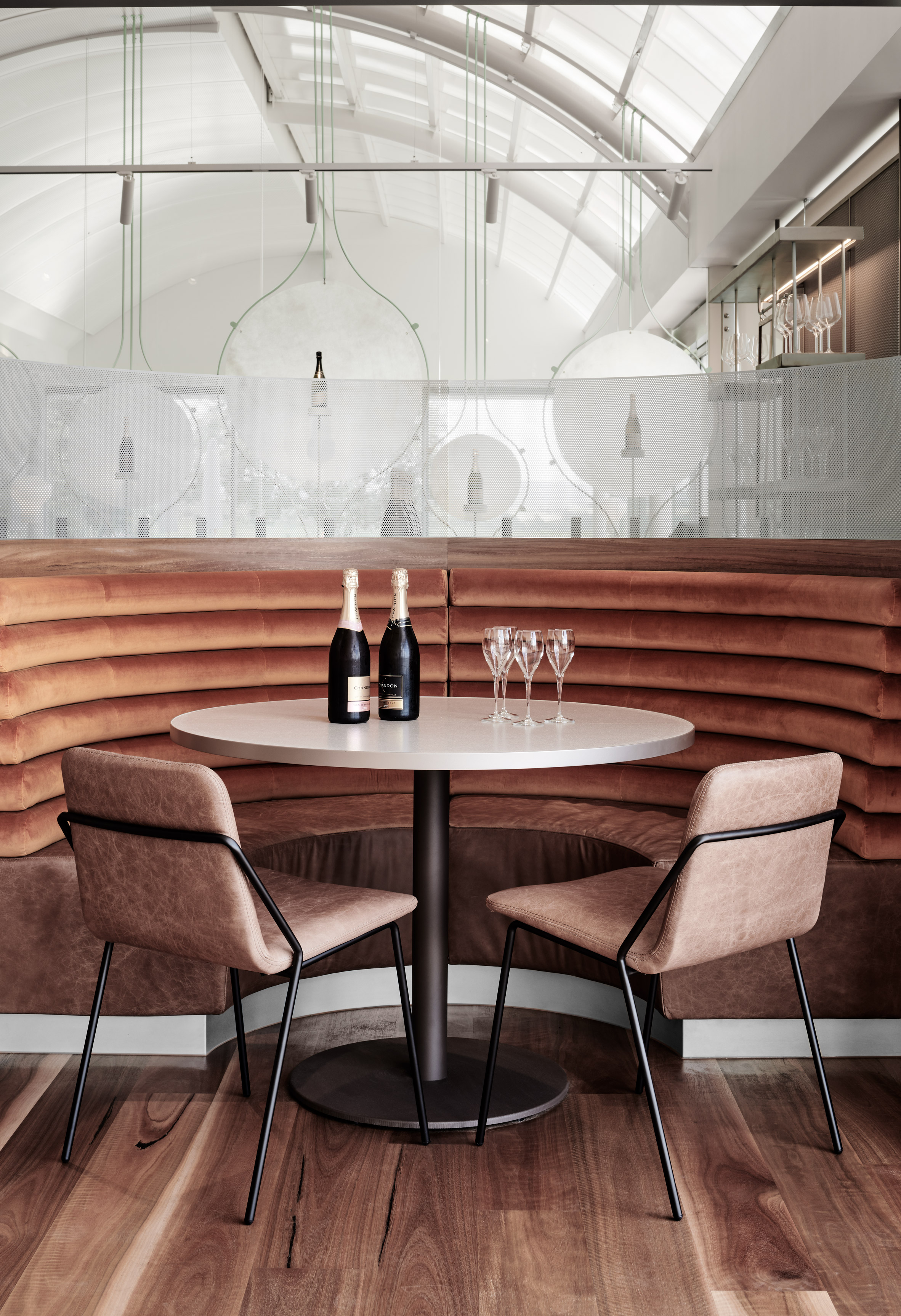 A large mobile, made up of shiny copper discs attached to slim metal poles, are suspended from the centre of ceiling. They are intended to recall the “uplifting ritual of spontaneously popping a cork”.

“Dynamic, buoyant, and delicately-weighted, this sculptural pièce de resistance projects a sparkling patina in a playful take on the unpredictable nature of bubbles,” said the studio. The bubble motif is repeated throughout the space in the form of circular mirrors, hole-punctured cupboard doors and globular fibreglass screens that appear in the retail area. Here, the studio has also created freestanding display plinths that mimic the shape of bottle corks.

Banquettes in the dining area are a muted green, in reference to the colour of the rolling grapevine fields outdoors during the summer months. 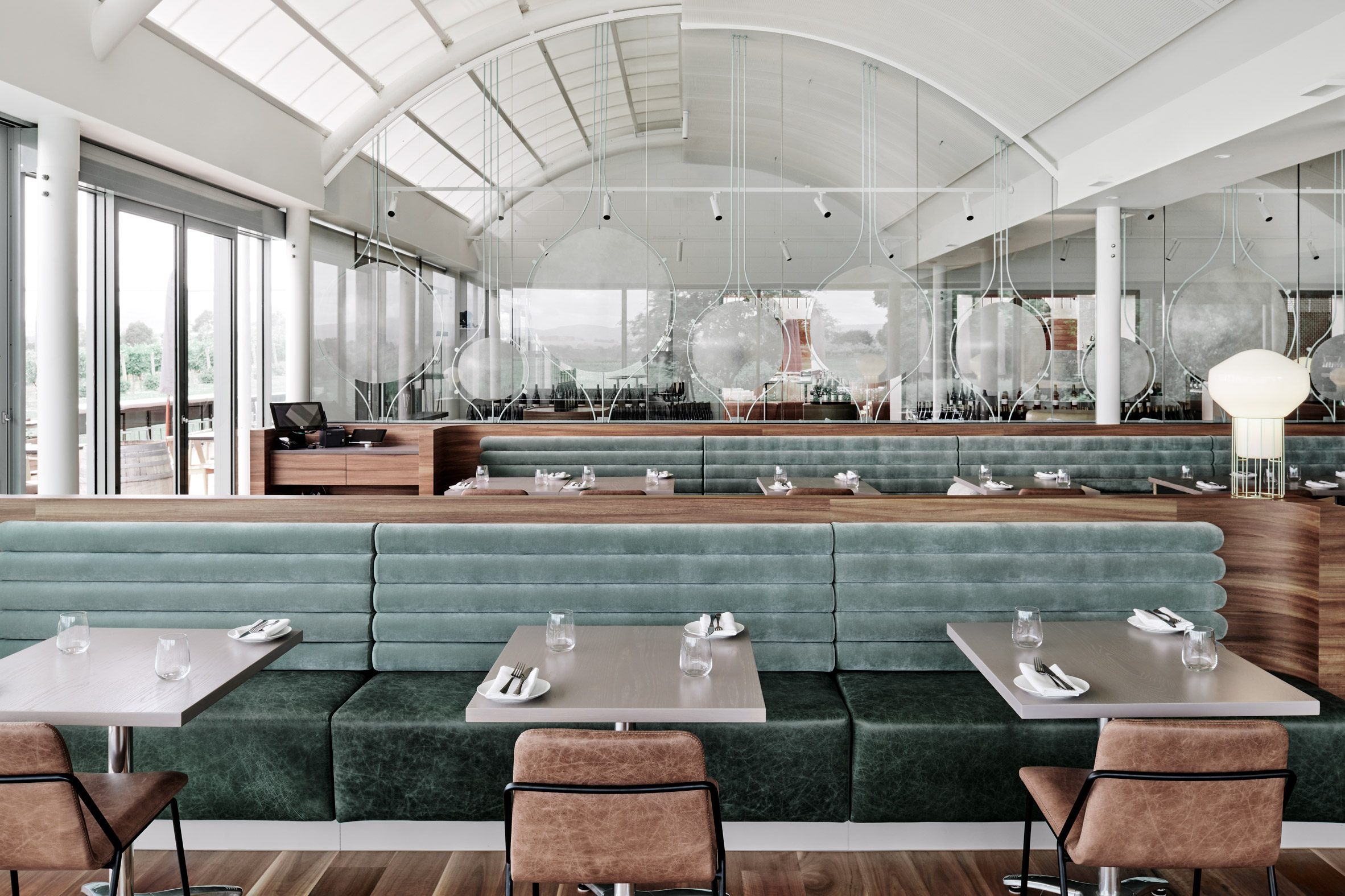 Working with a limited budget, the studio decided to keep structural changes to a minimum – only a handful of partition walls were removed to form a more open floor plan.

However the tasting area, where customers can sample and learn about different types of wine, has been relocated to a cosy corner at the rear. 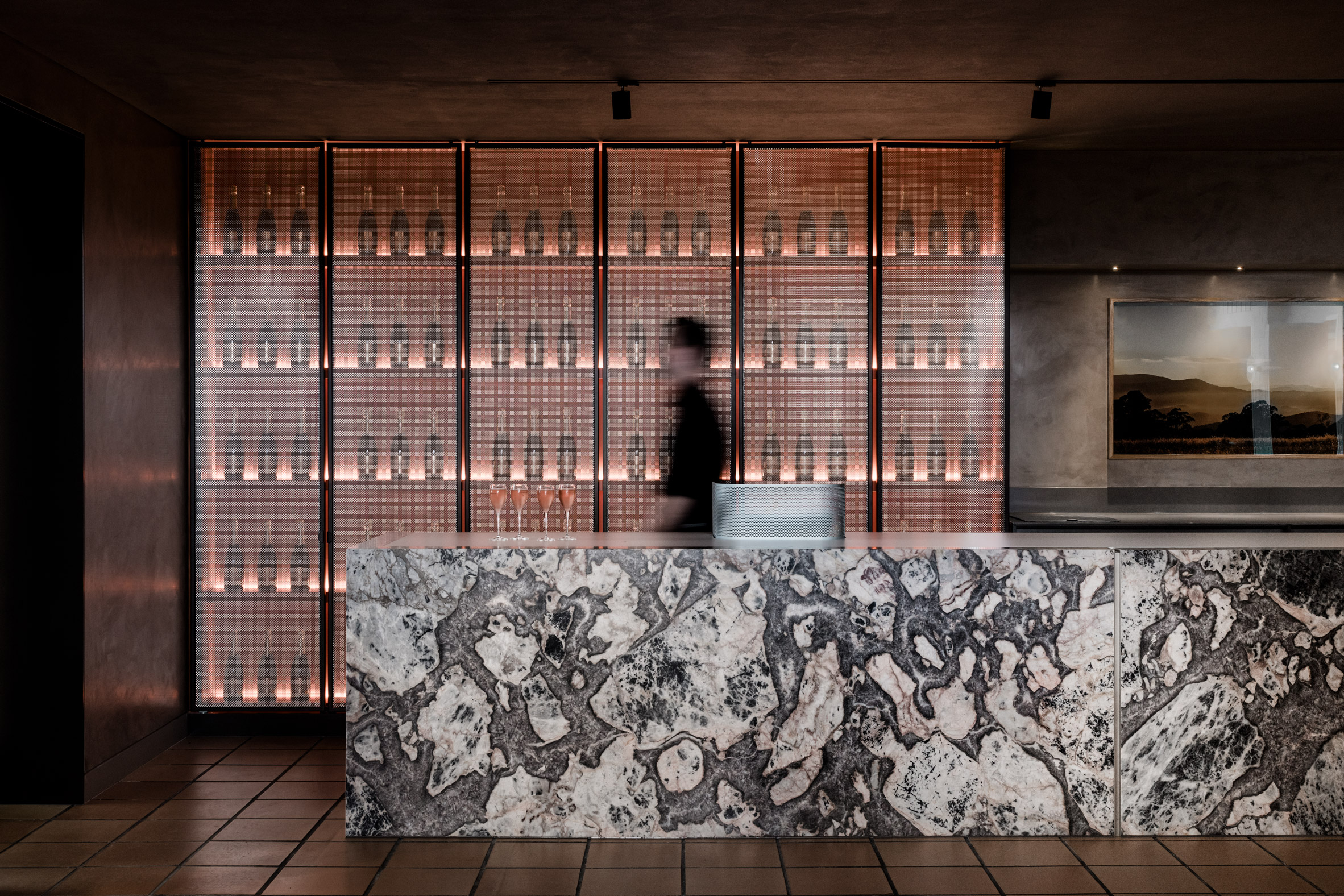 A chunky black marble counter with oversized white aggregate anchors the space, backed by a gridded storage unit where bottles are illuminated by rosé-coloured spotlighting.

“We took advantage of the compressed volume of this existing space to enhance the drama and sensory focus required for the tasting experience by using a dark, reflective palette and dramatic lighting,” Freeman added. 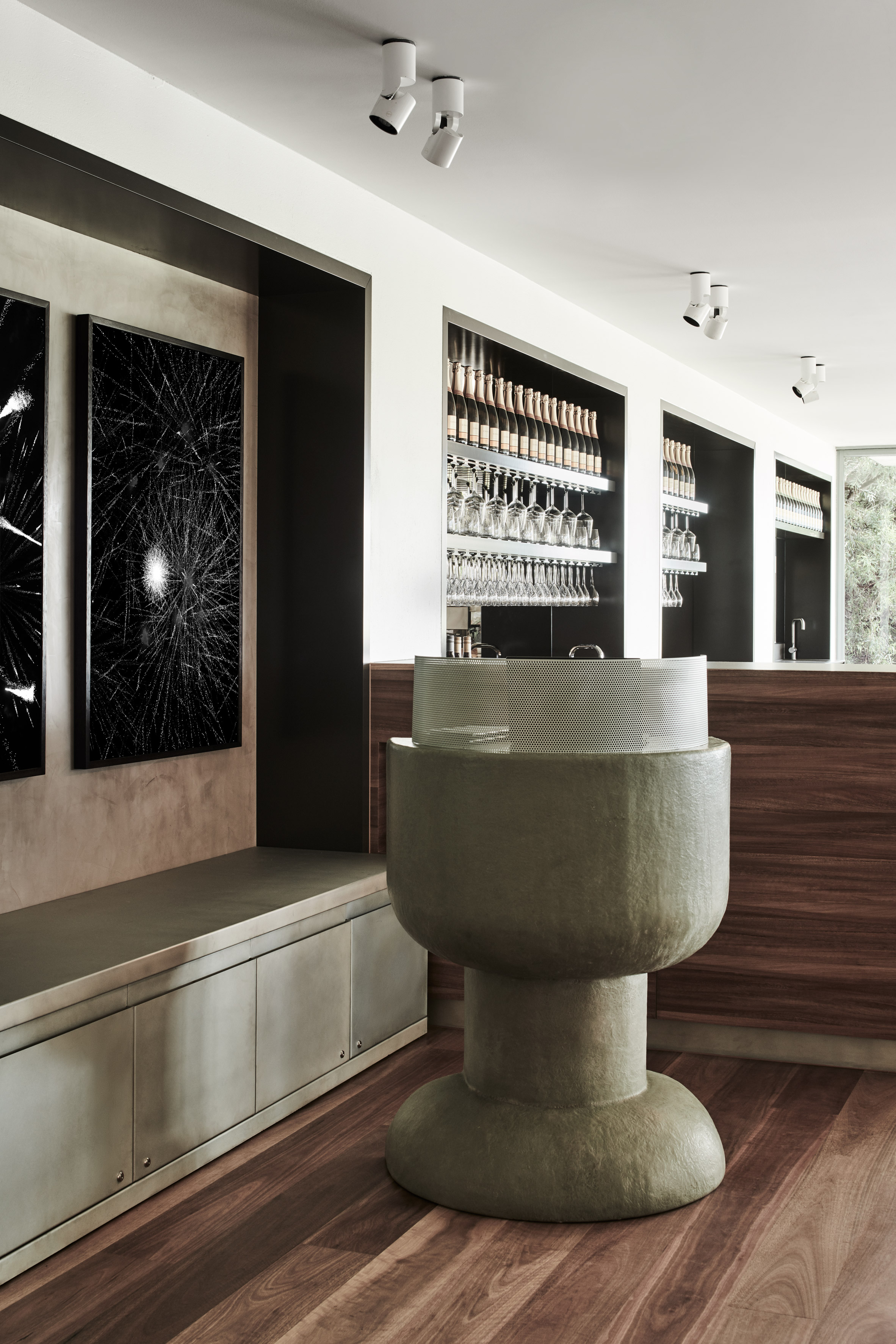 It joins a small number of new projects in the country’s wine-making regions. Other examples include an art-filled hotel in a part of Melbourne that’s famed for its production of pinot noir.

Photography is by Tom Blachford.